Thirsty Passports provide new way to get to know Milwaukee

If you're looking for another way to make our beautiful Milwaukee summer even better, you might find inspiration in the Thirsty Passport, which features 30 two-for-one drink offers at area bars and restaurants.

If you’re looking for another way to make our beautiful Milwaukee summer even better, you might find inspiration in the recently released Thirsty Passport.

The pocket-sized field guide contains over 30 two-for-one drink offers (including cocktails, beer and wine) from some of the city’s best bars, restaurants, breweries, and distilleries, each of which are good through Labor Day weekend. Essentially, it provides over $250 in alcoholic beverages for just $20, making it a no-brainer for anyone who’d like to get to know some of the city’s hotspots without breaking the bank.

The Thirsty Passport is the brainchild of Daniel and Michael Szymanski, brothers and business partners who grew up in the Milwaukee area before launching their careers and settling down in Colorado.

Daniel, who moved to Colorado after spending time abroad in the Peace Corps and working for Google, says they were inspired to launch their business in Milwaukee thanks to the notable growth of the city’s food and beverage scene.

"When I left home, there was a nascent food and beverage scene; but, the focus on quality and local ingredients has just exploded in recent years," he says. "And that’s just been an amazing thing to witness."

"When we came back to visit, we noticed the evolution that had taken place," says Michael, who made the move to Colorado to be closer to his wife’s family. "And as we looked around at what was fresh and new, and we were really blown away. This has been a really fun way for us to reconnect with the city." 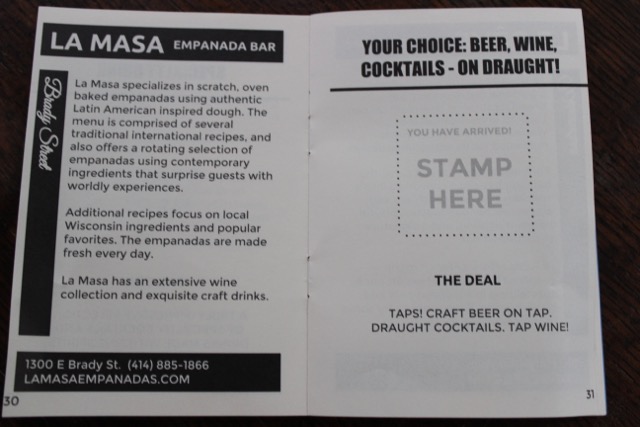 Daniel agrees. "A city is a bit like a child. In some ways, when you’re up close, you don’t see it growing so much. But, then, when you spend time away, you see how everything has changed. One of the best things about pulling together the Thirsty Passport was really getting to know the owners and bartenders in the city who are helping to propel the innovation that’s happening."

The Passport, which covers a wide variety of venues around the city, contains popular spots like Swig, Camp Bar, Pizza Man and Great Lakes Distillery, along with some newer restaurants and bars like Easy Tyger and Dock18 Cocktail Lab. Even better, each two-page spread in the booklet offers up insider tips and information for each of the venues, making it a perfect way for both locals and tourists to get to know the city better.

"We were so impressed as we talked to business owners along the way," Daniel notes. "They have great stories. For instance, one of our venues is Dock18, which is a collaboration between Twisted Path Distillery and Bittercube. And it was really impressive to learn how small local businesses like Bittercube have made a name for themselves over the years – both locally and across the country."

In addition to helping folks get to know the city better, Thirsty Passport has also pledged to give back 10% of its profits to Milwaukee-based charities. In fact, right now you can help it to decide which organizations to support by voting online. 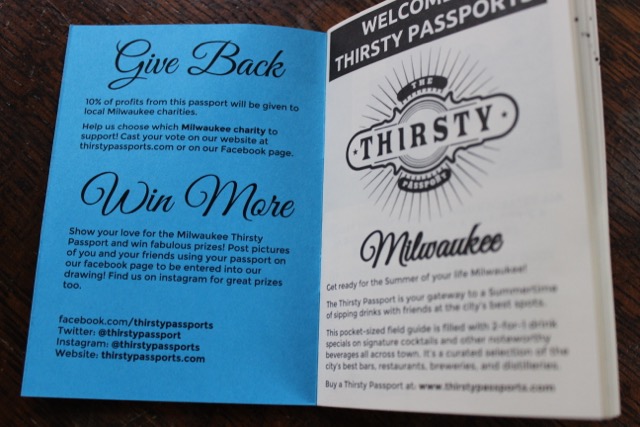 "We think Milwaukee is really at an exciting place in its history," says Daniel. "And it’s worth recognizing. The end goal of the Thirsty Passport is to help people break out of their usual routines and experience some of the best the city has to offer."

Thirsty Passports are currently available online at thirstypassports.com and mkewithlove.com or at Brew City Apparel in the Milwaukee Public Market.

Full disclosure: From Milwaukee with Love, one of the available vendors for Thirsty Passports, is owned by the author.