Toad the Wet Sprocket's still got it: And it's not all '90s nostalgia

Toad the Wet Sprocket's Summerfest show was a harbinger of nostalgia. But, it was also a reminder that some bands are simply downright timeless.

Has it really been nearly 25 years since Toad the Wet Sprocket released "All I Want" the infamous '90s tune that was smattered on the airwaves right alongside the grunge hits of Nirvana and Soundgarden?

It’s hard to believe. But, maybe not as difficult to ponder as the thought that Toad is back. After breaking up in 1998, just after the release of "Coil," there seemed little chance the band would reunite. Glen Phillips was pursuing a solo career, and rumors flew that the band just simply didn’t work well together anymore.

But then, in 2010, they unexpectedly started making music together again; and the reunion spawned a new album, New Constellation.

Ultimately the album breathed new life into a band many had written off. Last July, Toad opened for Counting Crows at the Riverside Theater, and their performance bore all of the hallmarks of ‘90s pop/rock that were -- for better or worse -- largely forgotten, including symetrical song-writing, mumbly vocals, and mid-tempo songs that bore earnestly positive choruses.

The band, featuring Glen Phillips on lead vocals and guitar, Dean Dinning on bass and vocals, Todd Nichols on lead guitar and vocals, and Randy Guss on the drums, was a straight up, no BS, rock/pop show with a characteristic absence of glitz and glamor.

The crowd was made up of a combination of die-hard fans -- many of which knew all the words to the songs -- and a good showing of Smashmouth fans, many donning green faces and Shrek-eared headbands.

Phillips was familiarly barefooted when he took the stage; he was also fuzzy-faced, sporting a shadow of a beard and mustache, a departure for the typically clean shaven frontman. 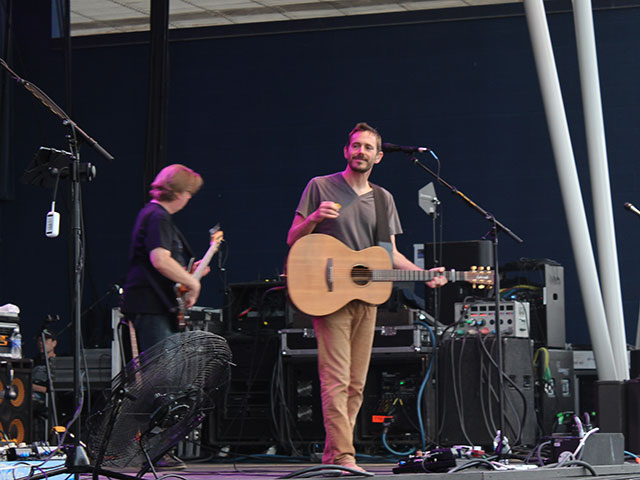 He welcomed the audience with a nostalgic greeting: "Last time we played this was some twenty years ago," he said, before opening with "Good Intentions" a song on "In Light Syrup," the b-sides and rarities album released in 1995.

"This has been kind of a perfect day," Philips noted as he led the band into New Contellation’s "California Wasted," "And this song is about being sad in beautiful places."

Before playing "I’ll Bet on You," Philips dedicated the song to his friend, Milwaukee musician Willy Porter, who reportedly lost his cell phone on the 4th of July. Apparently, a 14 year old boy found the phone; and he answered when Philips called this morning to see if Porter wanted to go to lunch. Ultimately, the phone was returned, Philips noted, but not until the kid had had some fun.

"Sometimes it takes a while for people to come around," Philips noted, "But they do".

From there, the concert was a mix of new and old, featuring the title track from the new album, along with enduring hits such as "Something’s Always Wrong," "All I Want," "Fall Down" and "Stupid," along with a track from the recently released EP "Architect of the Ruin."

A highlight for die-hard fans was the inclusion of 1989’s "Way Away," a notable track from the band’s debut album Bread & Circus, which won them accolades along with "One Little Girl."

"It's not country night, but that doesn't stop us." noted bass player Dean Dinning as they led into "Nanci," the twang-filled pop tune referencing country stars Nanci Griffith and Loretta Lynn. 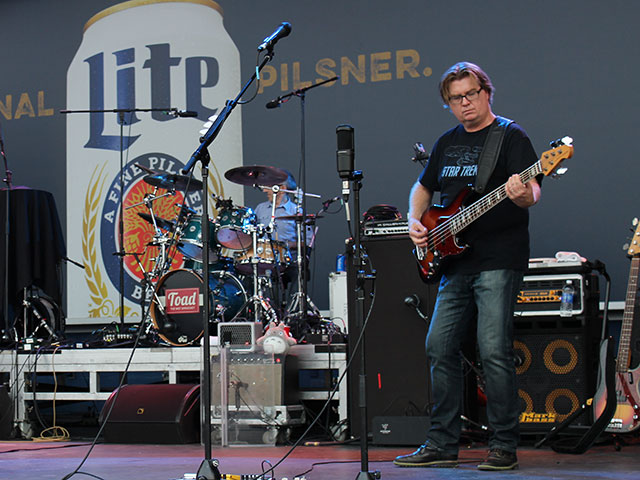 The crowd sang along through a bevvy of tunes, including the lesser-known "Brother" and "Nightingale Song" before being formally invited by Dinning to sing along to "All I Want."  The crowd obliged, and kept on singing straight through "Fall Down" and the closing song, 90’s favorite "Walk on the Ocean."

But, the fans wanted more. As Philips and the band exited the stage with a simple "See you soon," the crowd started screaming and chanting "Toad! Toad! Toad! Toad!"  And all of a sudden, it was the 1990’s all over again.

The encore performance seemed unexpected.There was a pause as the band gathered their instruments, and it wasn’t until about halfway through the performance that the mics got turned back on.

But it didn't stop the crowd from cheering as Philips, Guss and Dinning rocked out on their guitars, kicking out a tongue in cheek cover of David Bowie’s "Ziggy Stardust."

Overall, I have to give it to the band. It was a good show. A great show, even. It was filled with no-frills 1990’s nostalgia -- and not a moment was regrettable. In fact, at least for me, it highlighted an interesting aspect of Toad the Wet Sprocket’s legacy: its timelessness.

Back in the day, Toad got flak for not fitting in with some of the more aggressive acts of the era. But, in 2015 -- when pretty, melodic tunes are back -- it seems Toad fits right in.