Tochi, the ramen restaurant which opened in January 2014 in the old Anaba Tea Room space at 2107 E. Capitol Dr., will move its operations to West Bend.

Tochi, the ramen restaurant which opened in January 2014 in the old Anaba Tea Room space at 2107 E. Capitol Dr., will move its operations to West Bend.

The restaurant announced the news on its Facebook page earlier today, and Chef Gregg Des Rosier confirmed the news via phone. 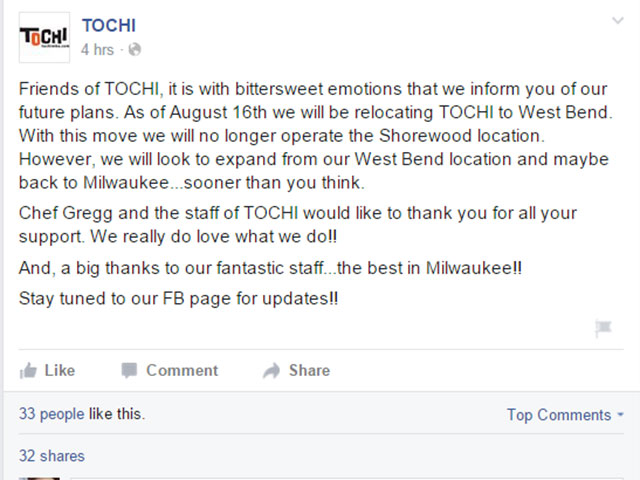 Des Rosier says that the restaurant will remain in operation at its Shorewood location through Aug. 16, taking occupancy at a new riverside development at 705 Village Green Way within the next six weeks or so.

Des Rosier, who lives in West Bend and has been commuting to the Milwaukee area for the better part of 14 years, says he’s proud to have the opportunity to open his own restaurant in the city he calls home.

The new restaurant, he says, will have more of a "punk rock" vibe, and he’ll be doing away with the Godzilla theme currently used at the Shorewood restaurant.

Although the West Bend restaurant will actually be smaller, Des Rosier says the kitchen will be nearly three times larger. So, he’s looking forward to making some changes to the menu, which will still offer most of the same core items.

"I’m looking forward to making tonkotsu ramen on a regular basis," says Des Rosier. "And I’ll be looking at adding some items to the menu."

Des Rosier says that, despite his excitement to lay new ground, he’ll miss Milwaukee and hopes to expand back down into the area in the years to come.

Shorewood shines with the world's only "invisible house"