Once partly old railroad rights of way, Milwaukee's 118-mile paved Oak Leaf Trail winds throughout the county and is used everyday by people of all sorts - whether to commute, to get exercise or just to have fun.

Milwaukee’s 118-mile Oak Leaf Trail winds throughout the county, used every day by many people, whether to commute, to get exercise or just to have fun. Parts of the trail that were once old railroad rights of way are now paved and turned into the trail one walks today.

Now, however, instead of trains going by, you will see people running, walking, biking or strolling with a furry friend.

While taking a recent bike ride through the trail, I decided to stop and chat with the people that use Oak Leaf and get a sense of the people you can potentially encounter there on a daily basis. Each person I chatted with had a different experience with the trail and different reasons why they like it. Here they are: 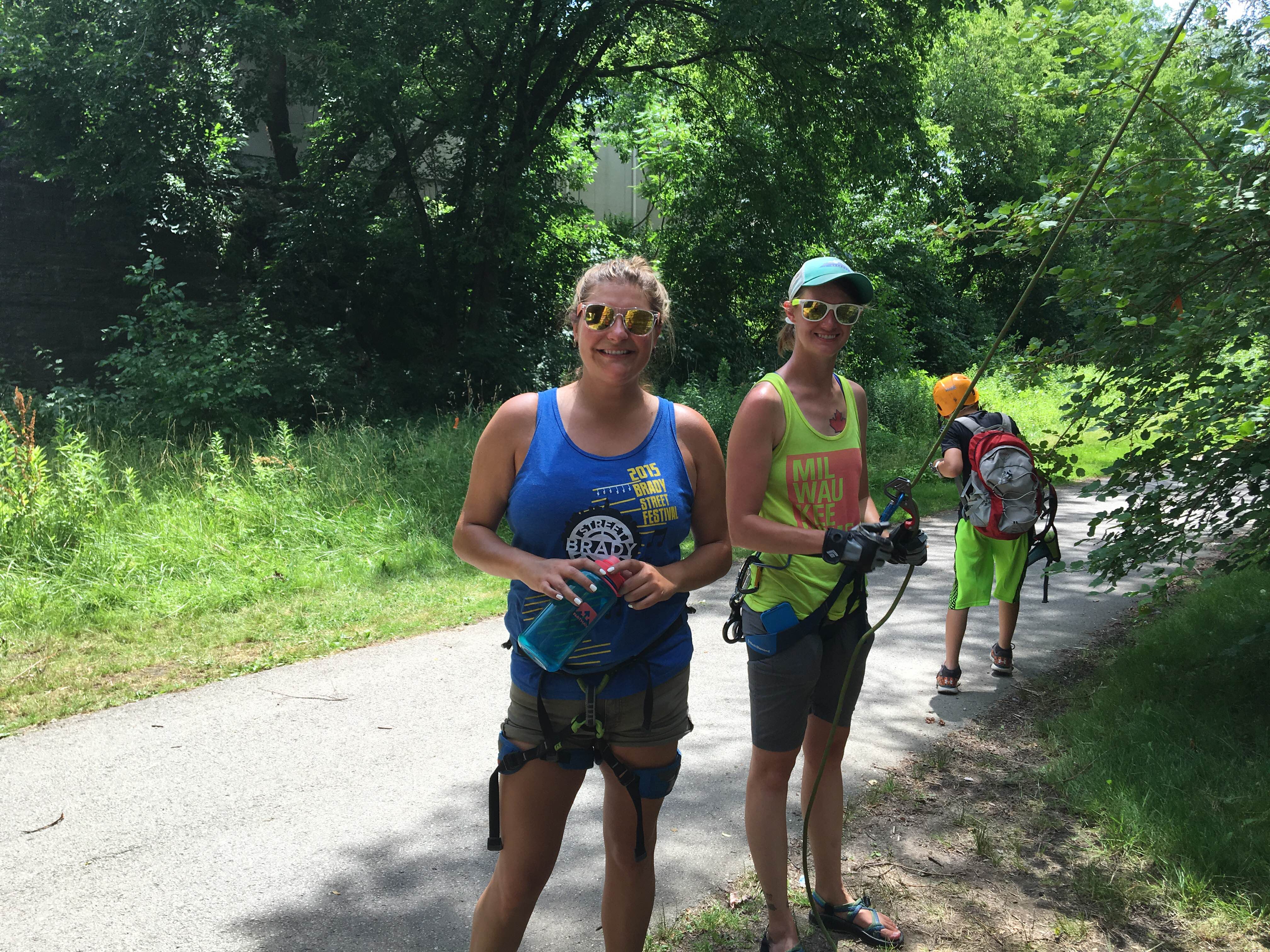 I was intrigued by a group of kids, led by two adults, using the brick-lined wall holding up a bridge to rock climb. It was a unique use of the Oak Leaf Trail. As it turned out, the two girls were Riverwest Outdoor Educational Adventure Summer camp counselors, helping the kids through a new outdoor adventure. And this is just one of the many activities they do with the kids.

"We take kids canoeing, kayaking, rock climbing, hiking, and biking through the city of Milwaukee," explained Melissa Markes (right). She chose this job to combine her love for kids and for the outdoors. Her co-counselor, Kaelie Blake, is in her first year of this job and loves it as well because she enjoys having fun with the children and trying new things. 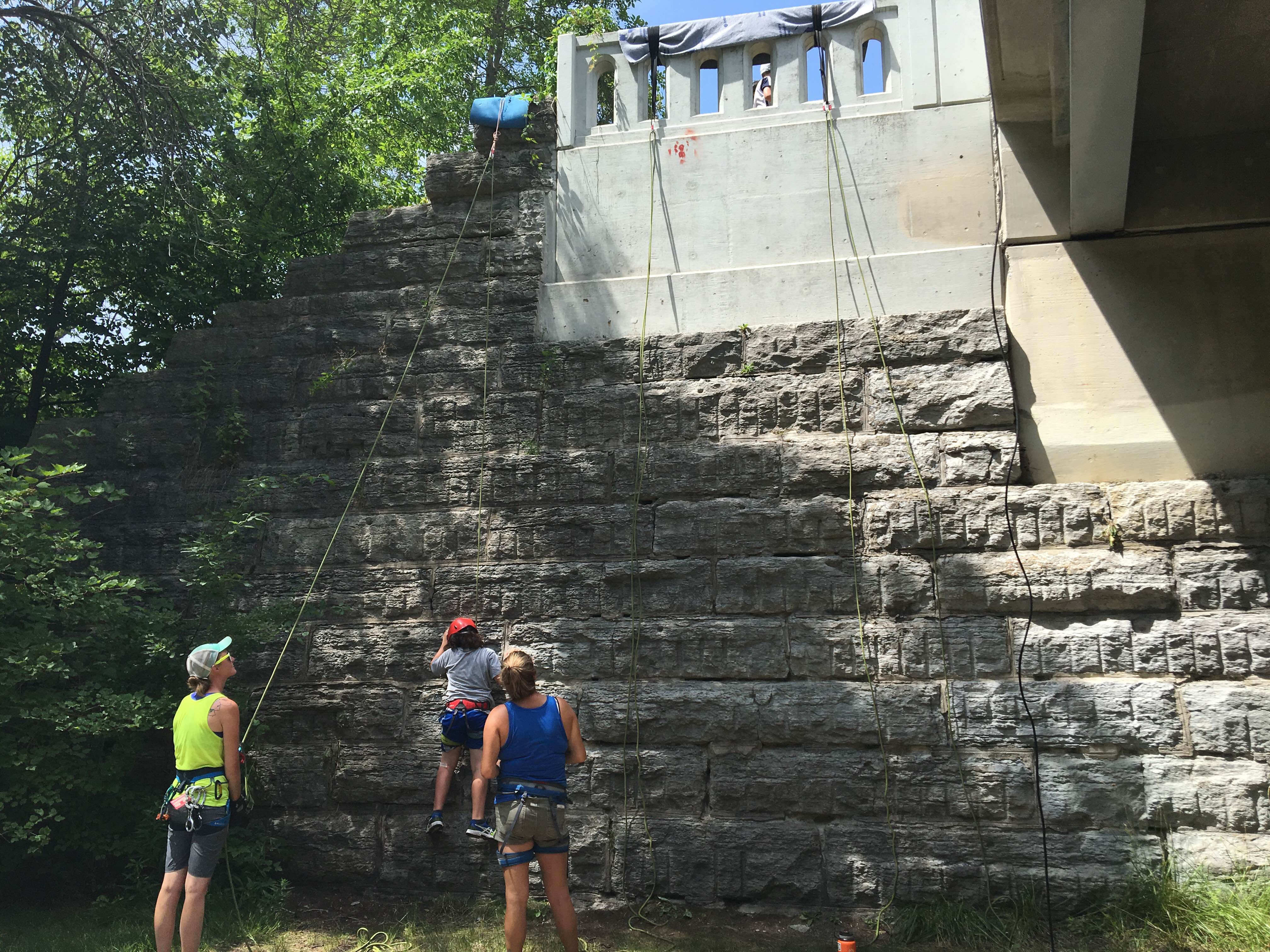 The Oak Leaf Trail helps them get the kids where they need to be without worrying about traffic and the busy roads getting in the way. But most importantly, the trail allows for a dose of outdoor fun for the children, even while living in the city. 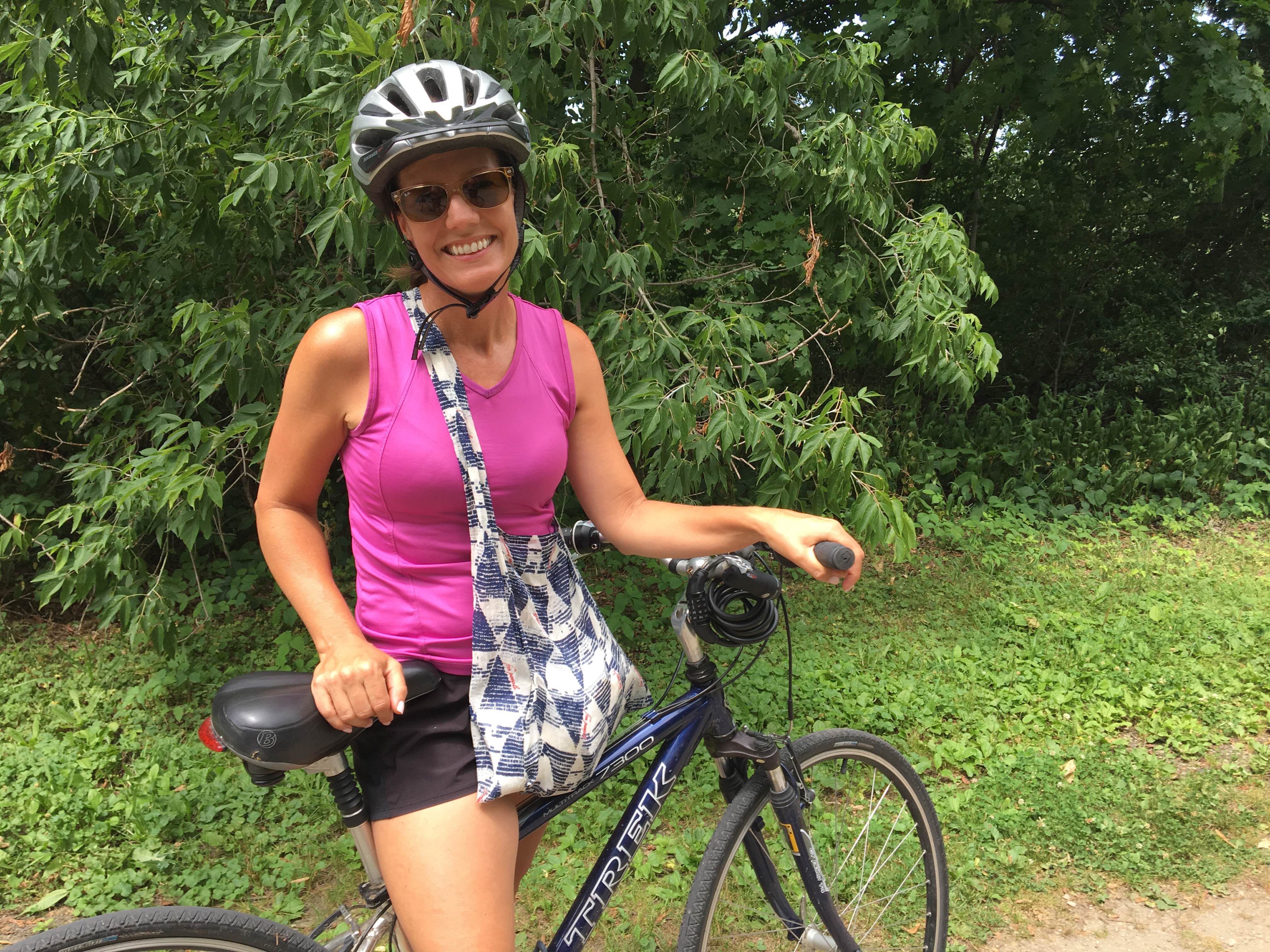 The long span of the trail makes it easy for people to get from one place to the next. The trail goes from Downtown Milwaukee, through the East Side and out to some of the suburbs. Lisa Lyons likes the convenience of the trail. She lives in Whitefish Bay, so the trail allows her to get Downtown to work.

"It is a really nice, direct, safe route to get back and forth to work. I just find it is far more relaxing and stress-relieving than driving and parking and all that," Lyons said. She also likes the fact that she can start her day with a bike ride and some exercise. She enjoys that she can see nature and all the people who use the trail. To her, it is a key part of Milwaukee. 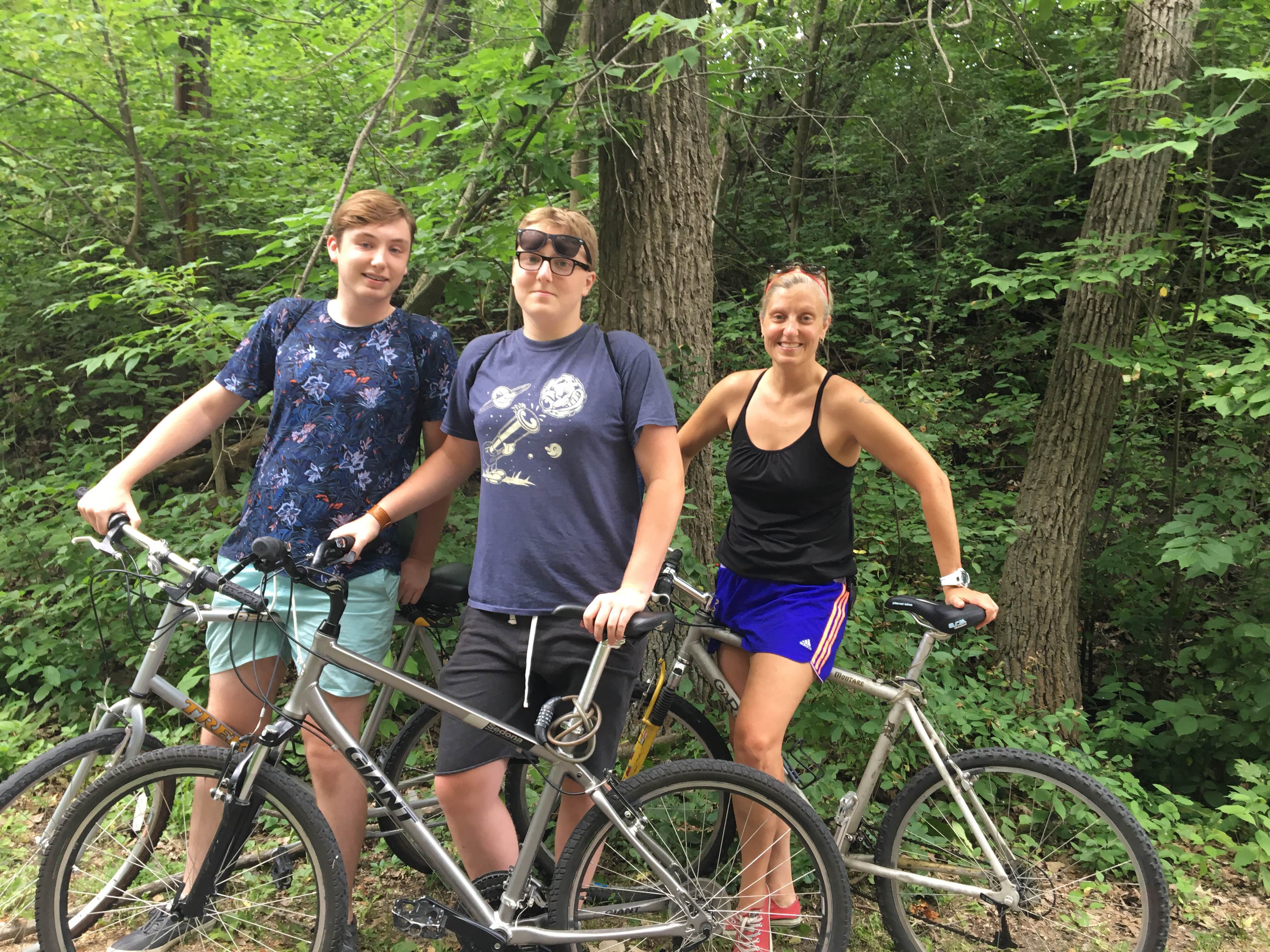 "We’re frequent flyers," says Meredith Jensen. "I'm pretty much on this path twice day and was anyways for the last ten years or so because I run and bike on it." Now she also has her two sons, Oscar (left) and Avery Sprangers, joining her on the path for family time and to travel to the fun activities they have planned for the day, like going to the swimming hole in Brown Deer.

Their family uses the trail to bike and travel further distances since it now extends all the way up to Sheboygan. They like the convenience and ease of being able to travel from Downtown to Shorewood or to other places around the county. They love that it is a double whammy of being able to get around while getting exercise. 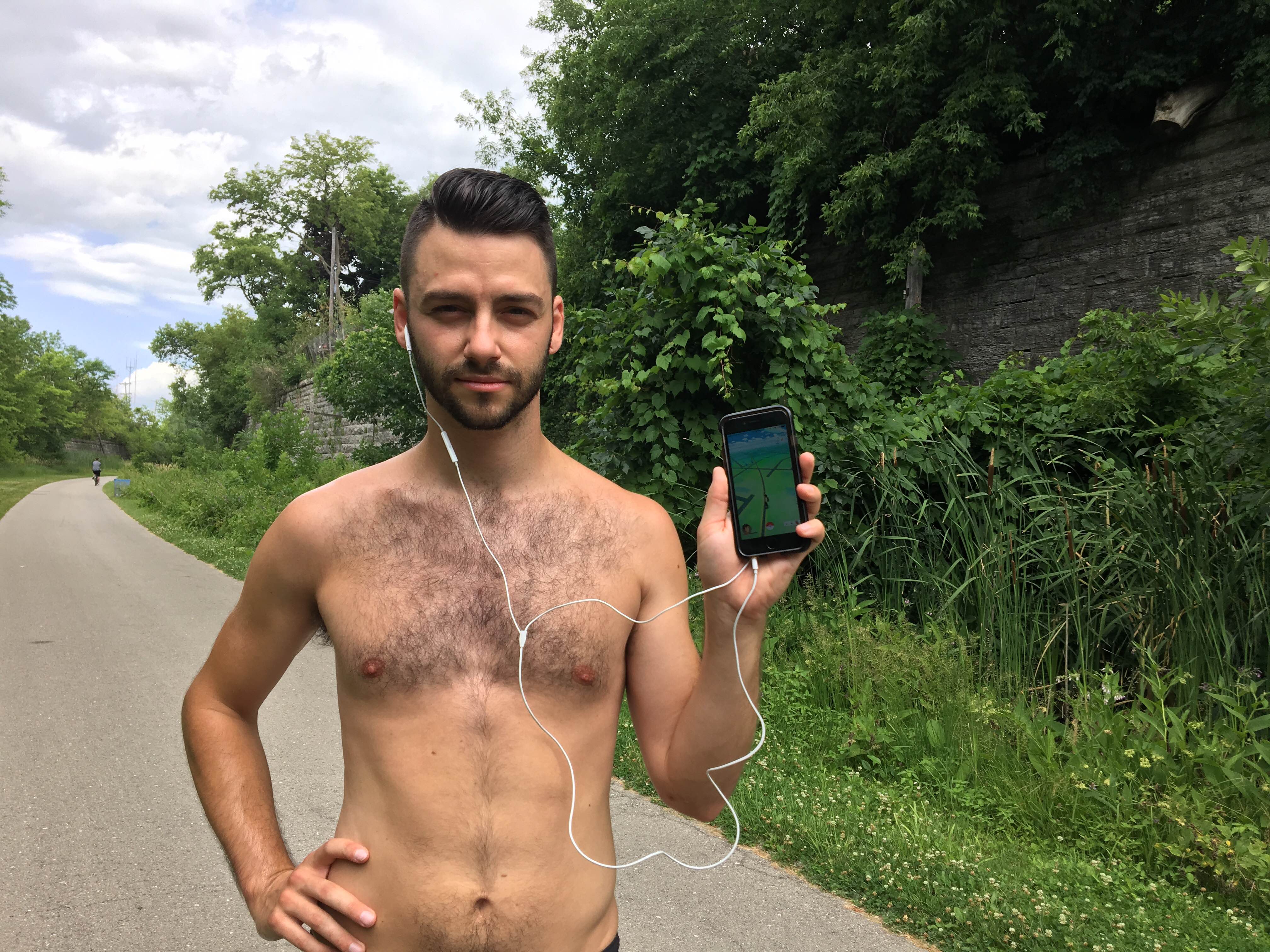 "I don’t run very much. Today’s really hot, and I had nothing to do, so here I am," Nick Edmonds said as he was on the trail. He really likes the fact that the trail has been re-purposed from train tracks and thinks that it is a solid route for his running that's away from traffic.

He uses the trail for much more than fitness. It also allows him to catch some Pokemon along the way and get a few breaks from his run. However, he has a PSA for all the Pokemon Go users out there: The trail unfortunately does not have a lot to offer, so he recommends you take your Pokemon catching elsewhere. 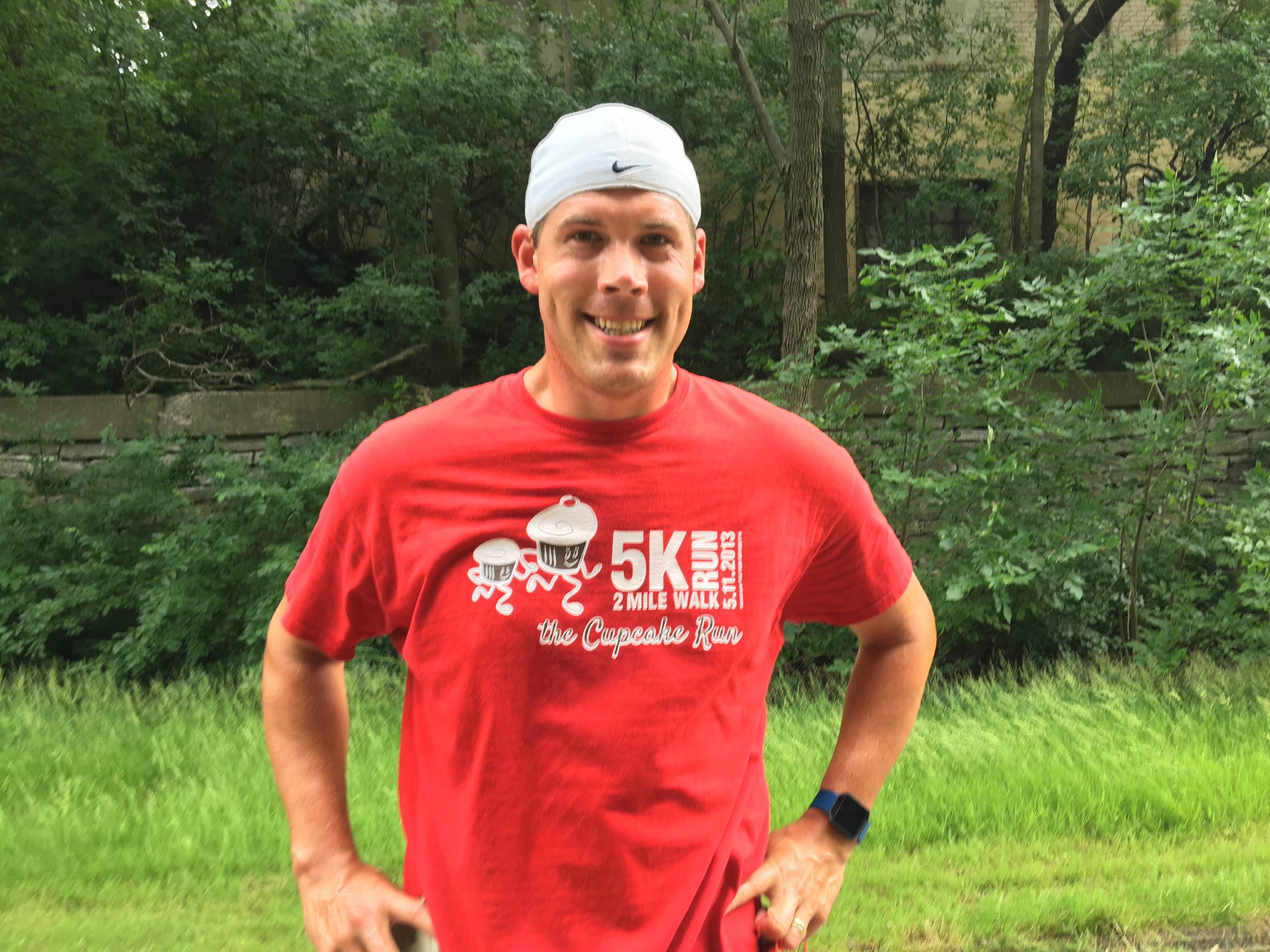 The Oak Leaf Trail is more than just a way for people to get from place to place. It is also a training center. Runner Nick Mccalmont uses it to help him train for taking on big races. Right now, he is working on running for his first half marathon.

He likes the fact that, right after he works Downtown, it is easy to hop on the trail to get straight to training.

"I prefer running here than the suburbs," Mccalmont said. It is a trail that has helped him do three weeks of training already for his race in the fall and will continue to help him train further since, according to him, he still has work to do. 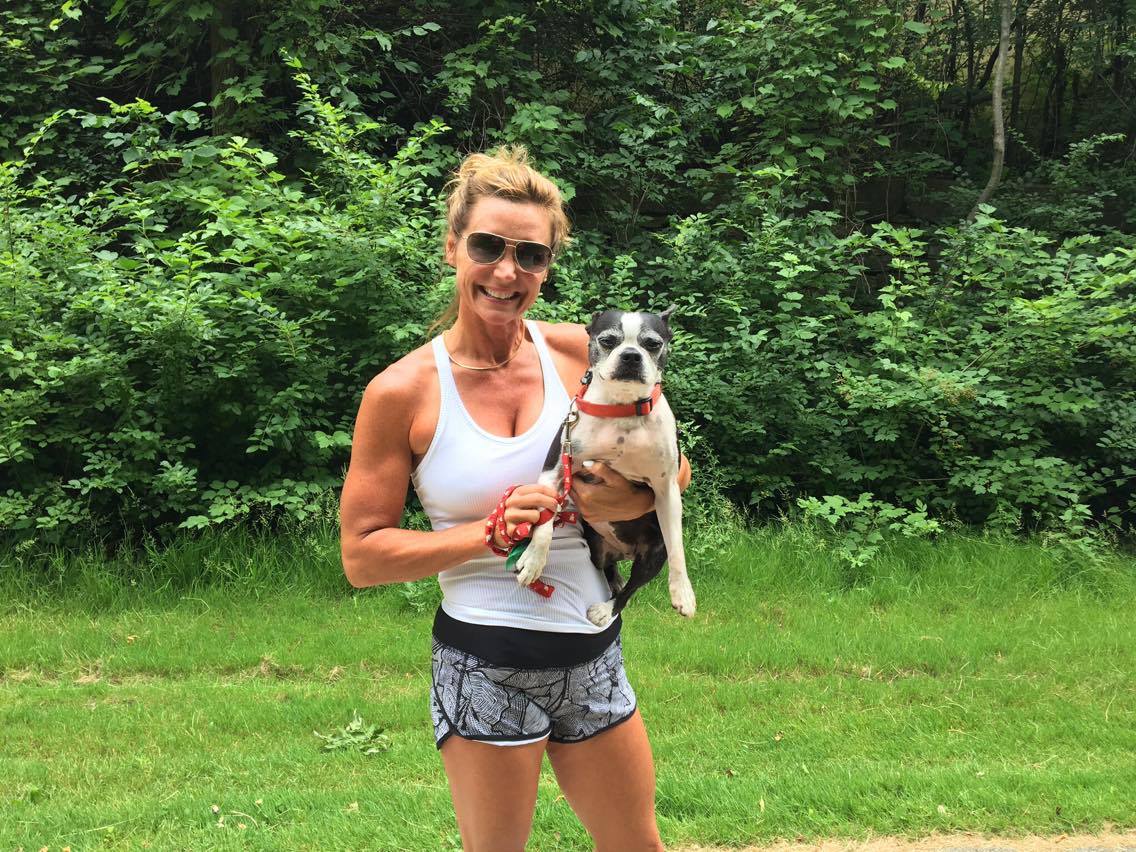 "You know, it’s beautiful actually when the foliage is out, there are so many nice people and it really is just peaceful." Dawn Davis explains. The trail is right down the road from her place, so it is a great place for her and her dog to head out for their daily walk and get away from the hustle and bustle of the city.

She loves seeing all the people on the trail, including the fellow dog walkers. Her dog loves really anywhere she gets to go, but Dawn says the dog definitely enjoys getting to walk along the Oak Leaf.

These are just a few of the many people you might meet along the trail, so be sure to hop on it yourself and see who you encounter.