Cleanup work continues at Trinity Evangelical Lutheran Church, 1046 N. 9th St., which was damaged in a fire in May. When that work is complete, a temporary roof will be installed, followed by a permanent roof.

The muck has been cleared from the area where the pews once sat in the sanctuary at Trinity Evangelical Lutheran Church, 1046 N. 9th St.

But up toward the altar, the entire floor is still hidden under a couple feet of the stuff, a mix of insulation, 140-year-old building materials, ash and other remnants of the fire that ravaged the 1878 building last May.

When I ask Triad Construction site superintendent Rich Awve if the entire sanctuary floor was covered in the gunk, I point to where it’s maybe two feet deep. 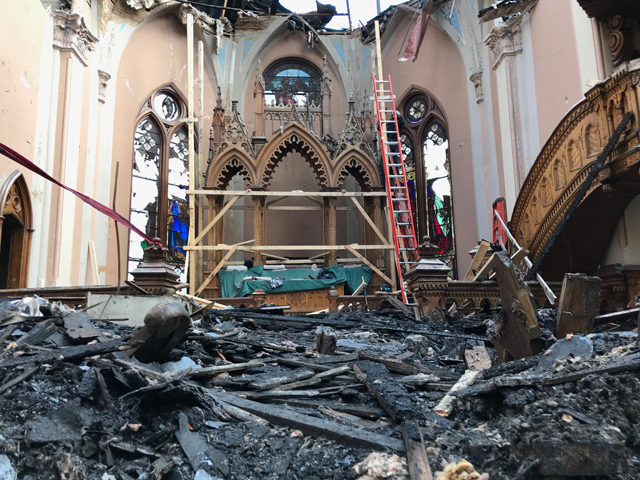 "It was," he says, "but it was more like that," he adds, indicating an area on the left side of the altar where a pile of the muck looks like it must be nearly four feet deep. 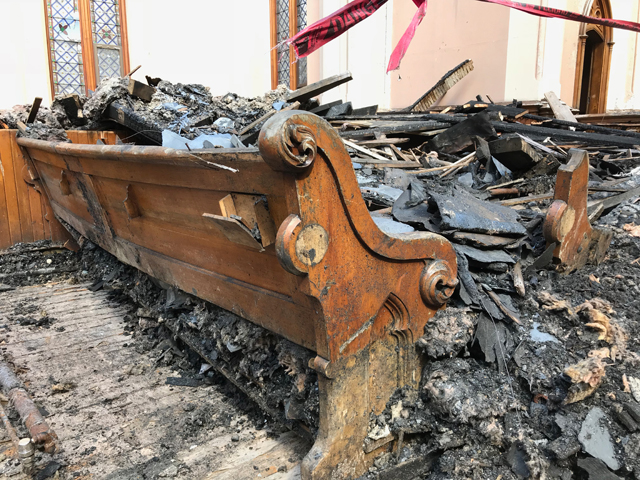 (Here are some images taken inside the church shortly after the fire.)

Crews are still working hard to clear out what was left after the May 15 fire, which led to the collapse of the roof and a couple of steeples, both of which fell through the floors into the basement. The smaller one – which was a decorative cover to an air vent – is still lodged where it fell. 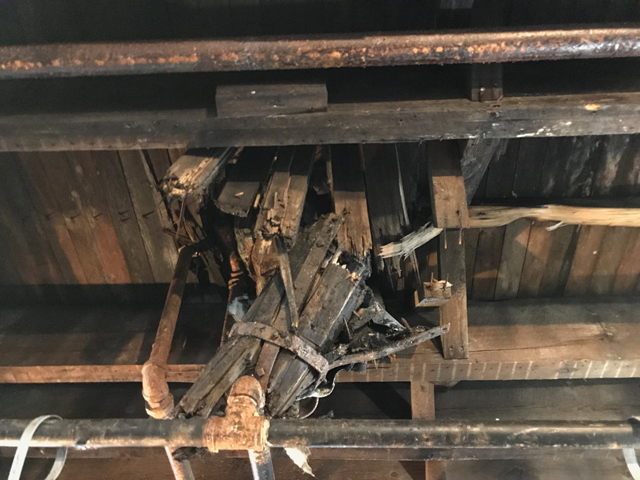 Cleanup work began in earnest after Triad attached steel I-beams to the exterior walls to ensure its integrity until a new roof is installed.

Uihlein/Wilson-Ramlow/Stein Architecture has been tapped to do the architectural work for the renovation of the historic Gothic Revival church.

Sifting through the detritus has proved fruitful, as useful bits have turned up and have been saved; like a section of the border (pictured below) that ringed the point in the ceiling from which the chandelier hung. 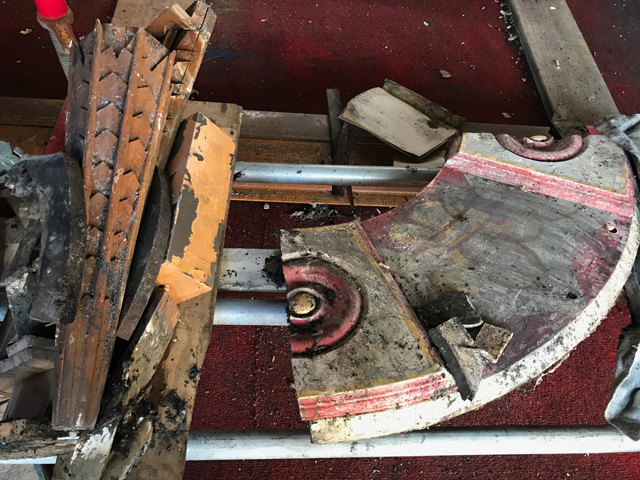 Awve is a member of the church and with Triad has done a lot of work there over the years, including not long before the fire when it installed cabinets in the basement and did upgrade work on the unique heating system that included pipes that ran beneath each of the pews (and which is still there and will be restored). 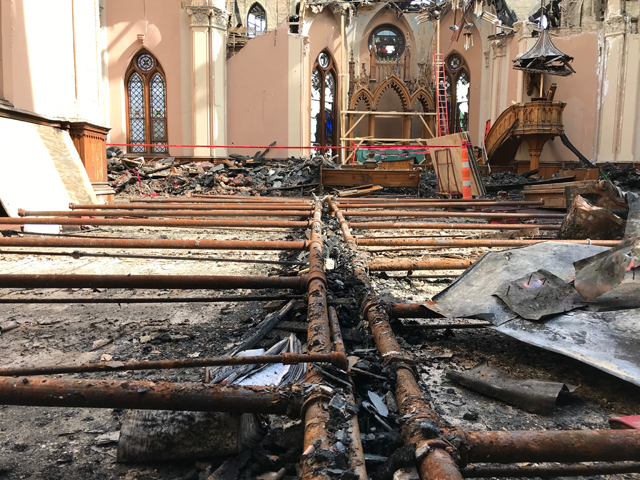 "I’m old German Lutheran," he says, as we stand in the now-open-air sanctuary as workers carry wood and other ruined items out to a dumpster. What remains of the rafters remains, like a spider web, above us. Two workers use a sledgehammer to take apart a burnt vintage pew that was clearly built to last and isn’t exactly cooperating.

"I know this place inside out," Awve adds. 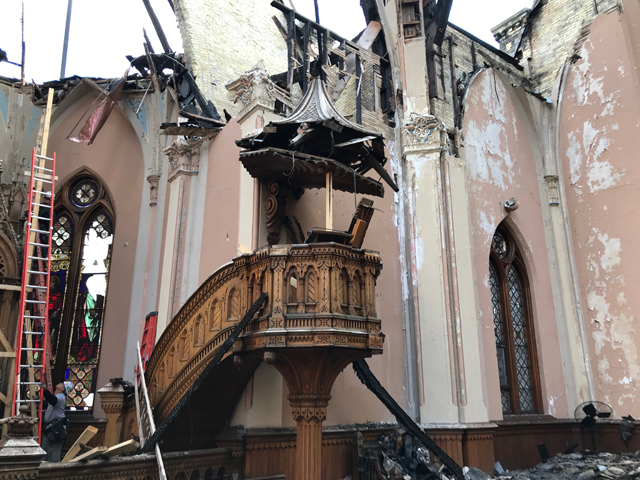 He tells me that what was left of the priceless original organ has been removed. What could be rescued has been saved and will potentially be reused if a replacement is built here. What was beyond repair is gone. 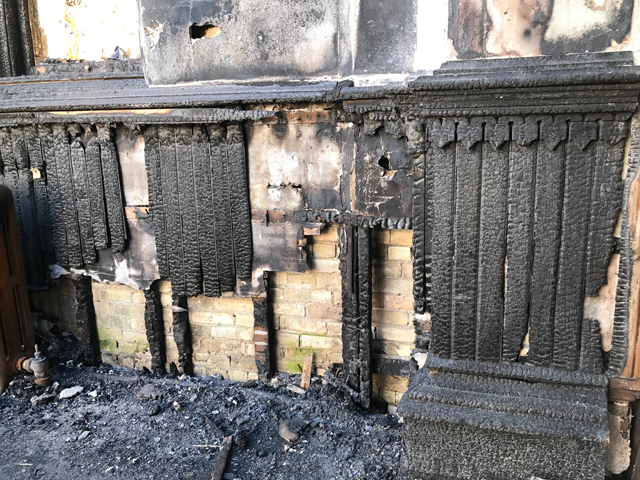 Out beyond the narthex, in the base of the taller, north tower, I see the gorgeous sweeping staircase has survived and its stalwart newel post was undamaged and has been crated up in place to prevent it being damaged during the clean-up and restoration. 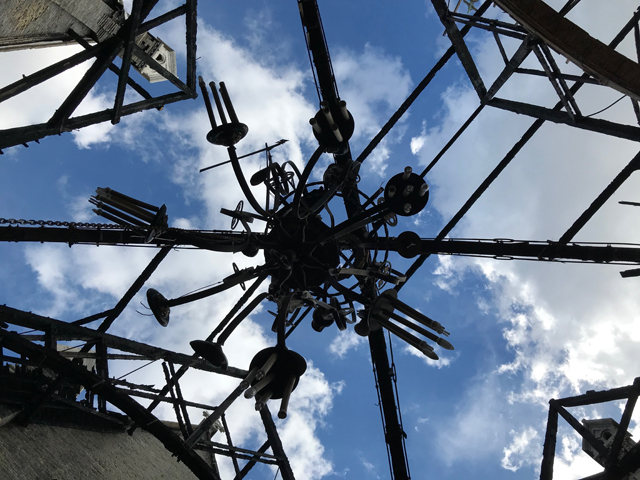 The chandelier still hangs in place, eerie in its starkness. Those heating pipes are all still there in a grid on the floor. The wall separating the narthex is burned in spots, but mostly relatively undamaged. 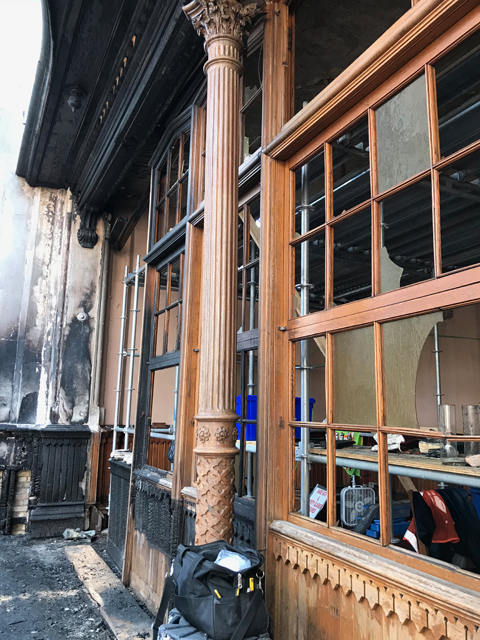 Some window frames will need to be replaced, Awve says, but plenty of them are still in good shape. They’ll preserve as much of the original frames as possible.

The wainscoting is mostly unscathed, though there are some burned sections. The pulpit and the altar are still standing. Original artwork has been rescued as have items that can be used to create replacements for other details.

The Bells of Milwaukee recently announced that it hopes to help restore the bells in Trinity's belfry.

Triad president and owner Mike Long says there may be enough original pews to reinstall a few rows. The rest will be recreated using the originals as guides.

The clean-up is expected to last a few more weeks, Long tells me, and in the meantime drawings for a new roof system are being completed. 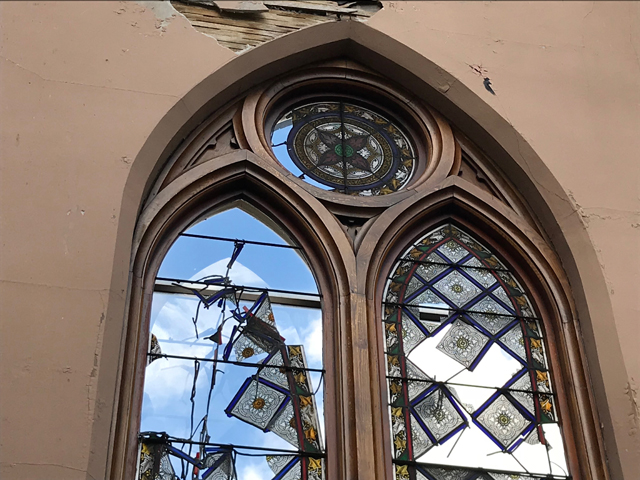 "First we clean up, then we put a roof on and then we put the gingerbread underneath," quips Awve.

"We’ll put up scaffolding in the entire footprint of the church," says Long, more seriously, "and then we’ll put on a temporary rubber roof, so this can all dry out."

He expects that to happen before the end of the year. Then a new metal roof structure will be erected and, after that, a permanent new roof will go on. What type of roof it will be – slate, steel, etc. – has not yet been determined.

The goal is to complete that work by early in the new year.

Beyond that – and the reopening of the adjacent office building by mid-October – there’s not a firm plan yet. There is no plan yet to bring worship services back to the site for now.

There’s a lot of work to be done, but as we stand there in the middle of the damaged sanctuary, it clear that there’s plenty to work with. And, miracle of miracles, the building stands despite a blaze that sure looked as if it might prove fatal for this Downtown landmark.

When I ask if Awve and Long have ever done a job like this before, they smile.

Three years after a devastating fire, Trinity is making strides