Striking images of the interior devastation at Trinity Evangelical Lutheran Church have begun to emerge. Here are a few.

Yesterday, at a press conference held by the Milwaukee Fire Department, an employee of the Missouri Synod showed me a series of photos of the interior devastation at Trinity Evangelical Lutheran Church, 1046 N. 9th St., after Tuesday's fire.

Last night, another employee shared similarly distressing images. But we agreed to hold them until the congregation could take a look before they went public.

This morning, the church, built in 1878, shared this striking image on its Facebook page:

In it, you can see that the altar survived – which we learned yesterday when the paintings in it were carried out by cleanup crews – as well as some of the stained glass in the apse.

"This is a powerful reminder of who really is in charge," a church employee told me.

Much of the altar at Trinity is salvageable. The paintings from it have survived! pic.twitter.com/x1pWdvpPEv

What we didn't realize is that – as you can see in the images below, taken yesterday – the pulpit and its staircase and canopy have largely survived, and the central chandelier that adorned the sanctuary still hangs in place. Damaged, but there. 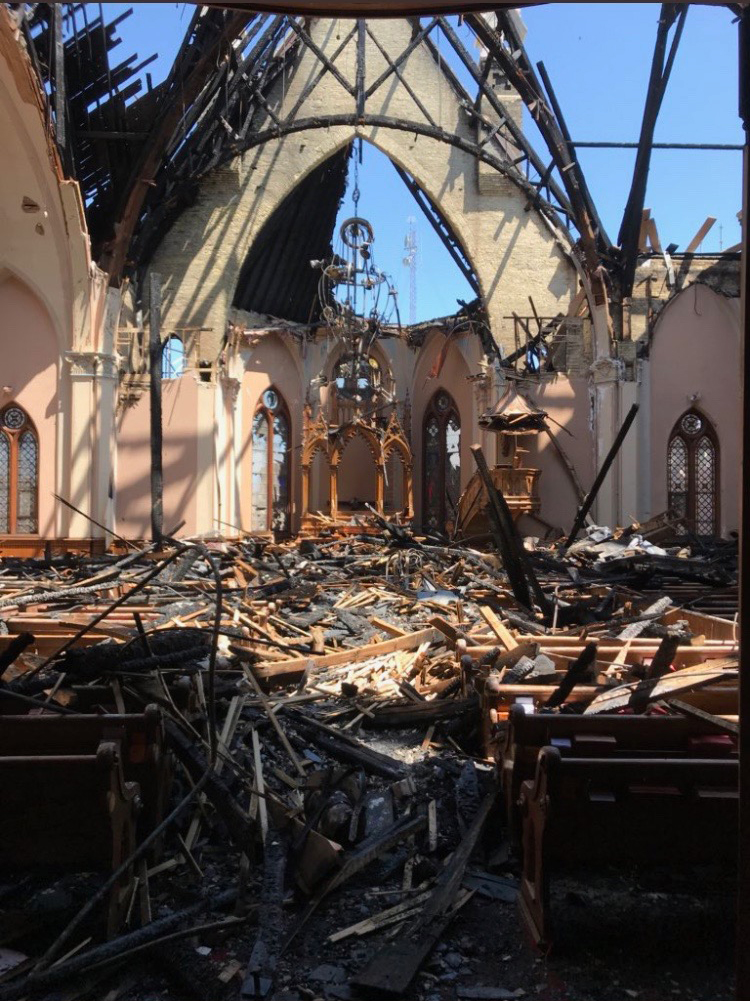 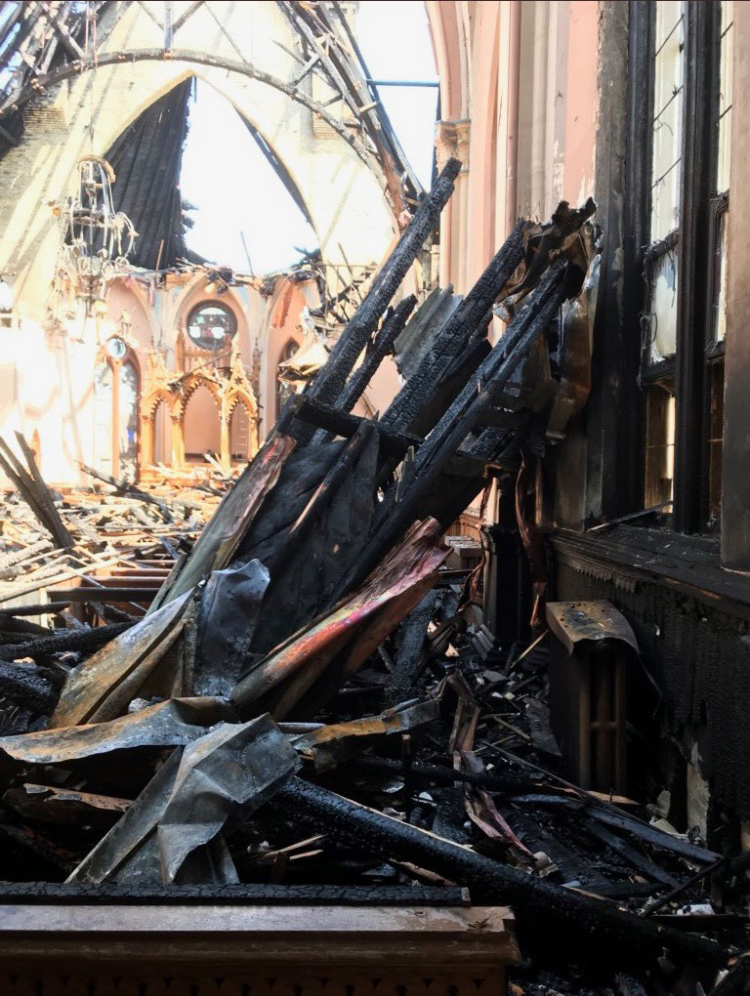 According to a source at the church, access to the interior has now been sealed until structural engineers can assess the stability of the structure, and that everything that can be saved and easily moved (such as the altar paintings and crucifix) has now been removed from the building.

Rev. Jonah P. Burakowski, mission executive for the Missouri Synod, said that structural engineers were on the scene today.

"Structure specialists are in the process of conducting a survey today," he told OnMilwaukee. "They are not sure how long this process will take and so we wait for their report.  Until we receive their report, the city engineers report, a civil engineer’s report and the fire inspectors report, we are unable to offer any speculation or determination on the physical structure."

Congregation leadership is expected to meet today to make what Burakowski called, "a series of decisions including where they will worship on Sunday."

At an evening press conference on Thursday, congregation representatives said that worship services this Sunday will be held at MATC, across the street from the church.

Also, yesterday, the church posted this information on Facebook after an unaffiliated individual launched a GoFundMe campaign to raise funds in the name of the church. 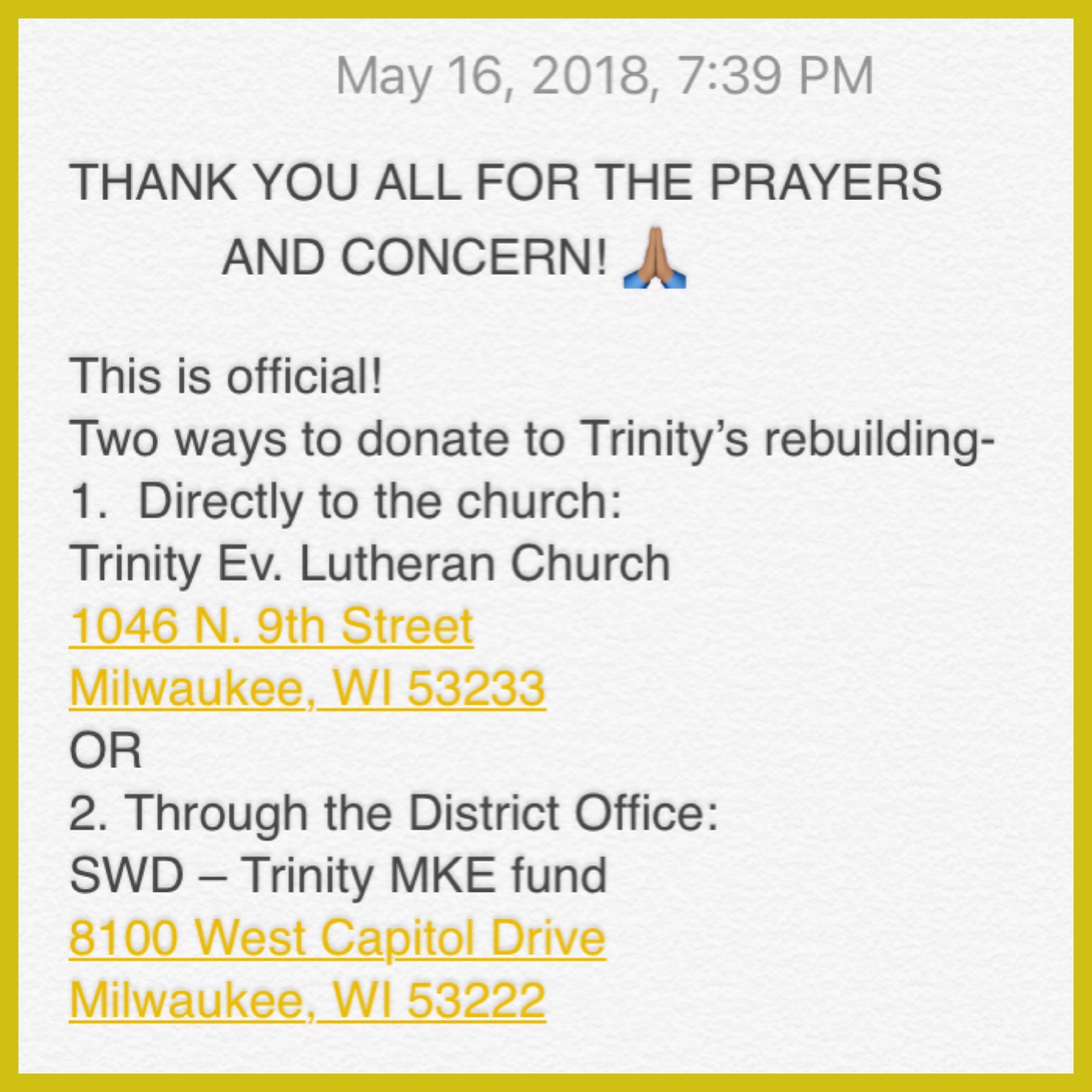