According to a statement issued today by the Rev. Jonah P. Burakowski of the Missouri Synod of The Lutheran Church's South Wisconsin District, Trinity Evangelical Lutheran Church, which burned on May 15, will be rebuilt.

According to a statement issued today by the Rev. Jonah P. Burakowski of the Missouri Synod of The Lutheran Church's South Wisconsin District, Trinity Evangelical Lutheran Church, which burned on May 15, will be rebuilt.

The fire, which apparently started on the roof of the church, 1046 N. 9th St., reportedly broke out while workers were repairing the roof. The blaze caused extensive damage, which you can see in more photographs here.

According to Burakowski, "Pierce Engineers Inc. visited our facility on May 30 to inspect the existing structure and determine the condition of the existing masonry walls. We met with our engineers on Friday, June 1, and learned the existing walls and gables, upon providing temporary shoring/bracing, are stable and appear to be in satisfactory condition for reconstruction without needing any demolition. 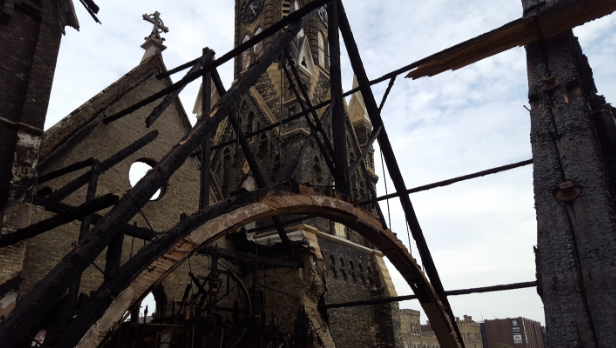 "We have retained Triad Construction Inc. to stabilize the walls and put a roof on the building so salvage of the sanctuary can begin. Our intent is to rebuild so that the Gospel of Christ crucified for the sin of mankind can continue to be proclaimed for many generations to come."

Some materials – including a triptych of altar paintings and a crucifix that stood upon the altar – were already salvaged the morning after the fire, when church officials and employees were allowed in to assess the damage.

The Victorian Gothic-style church, built in 1878 to plans by Frederick Velguth, is listed on national, state and local historical registers.

Burakowski told OnMilwaukee Monday afternoon that there is not yet a timeline for the work.