It was 30 years ago today; U2 reprises "The Joshua Tree" at Soldier Field

Two years after Irish quartet U2 played a string of nights at the United Center in support of its "Songs of Innocence," the band returns to the Windy City - to the even bigger Soldier Field - to rekindle the magic of its classic "The Joshua Tree," released 30 years ago.

Two years after Irish quartet U2 played a string of nights at Chicago's United Center in support of its then-new record, "Songs of Innocence," the band returns to the Windy City – to the even bigger Soldier Field – to rekindle the magic of its classic album, "The Joshua Tree," released 30 years ago.

The shows this weekend are part of a 33-concert tour that will be attended by an estimated 1.7 million people in North America and Europe this summer.

"The Joshua Tree"– released in March 1987 – was the band's fifth LP, following the critical acclaim and sales success of "The Unforgettable Fire," which went to No 1 in the U.K. and No. 12 on the Billboard charts here. 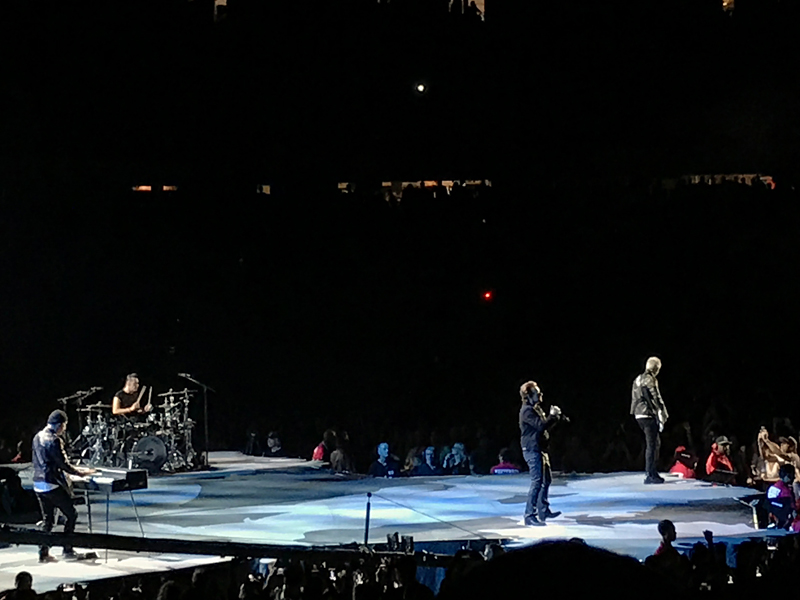 With a more straightforward, yet still arena-ready rock 'n' roll sound than its more experimental predecessor, "The Joshua Tree" spawned hits like "Where The Streets Have No Name," "I Still Haven't Found What I'm Looking For"and "With or Without You."

Its tour sparked the "Rattle and Hum" film and live album that followed.

The album topped albums charts around the world, from the U.S. and the U.K. to New Zealand, France, Canada, Austria and the Netherlands. It has sold more than 10 million copies in the United States alone. 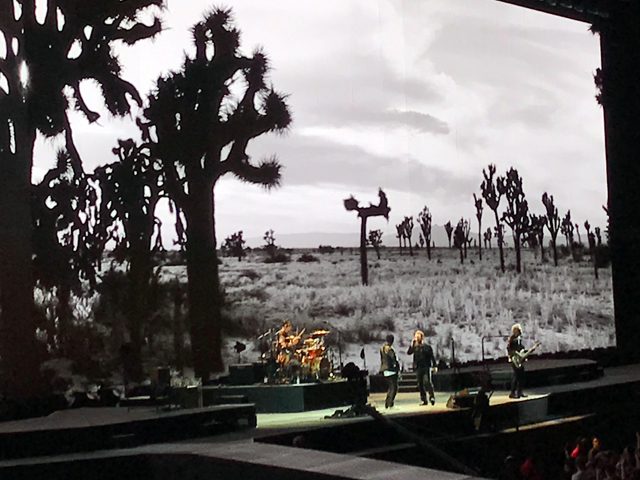 It was also a critical success, nabbing the 27th spot on Rolling Stone's 2012 "500 Greatest Albums of All Time" list. In 2014 it was inducted into the Grammy Hall of Fame. It's safe to say that it was the record that catapulted the band to the megastardom it continues to enjoy today.

On Friday, a 30th anniversary edition of "The Joshua Tree" was released and then yesterday, the band's first ever tour without a new album to promote rolled into Chicago for two sold-out shows at the gargantuan football stadium. 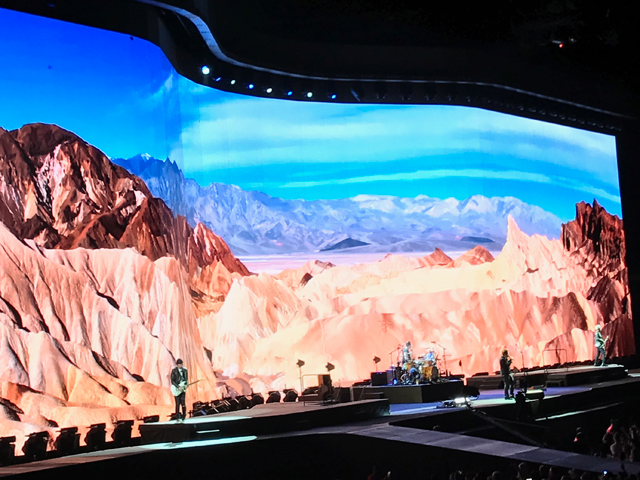 After a 45-minute set by The Lumineers as daylight shone and most of the crowd shuffled around buying beer and T-shirts or finding their seats, The Pogues' "Rainy Day in Soho" wafted from the speakers and the house lights dimmed.

Larry Mullen Jr. walked out to the drum kit on the "B stage" that extended out into the audience and fired up the instantly recognizable beat to 1983's "Sunday Bloody Sunday." Soon after, The Edge emerged, playing the guitar riff. Next Bono, followed by Adam Clayton, and they were off, playing a quartet of songs from "War" and "The Unforgettable Fire," the two LPs that set the stage for "The Joshua Tree."

Moving to the main stage, with its stunning 200x45-foot video screen backdrop images supplied by photographer/filmmaker and longtime collaborator Anton Corbijn, the band reeled off a blistering "Where the Streets Have No Name," the opening track on "The Joshua Tree."

Despite a few missed lines during the night and the occasional flub – and a relatively flat, perhaps rusty, "I Still Haven't Found What I'm Looking For" – U2 brought its A game.

Thirty years on from "The Joshua Tree" the band sounds as good as ever. And they still make it look easy. The Edge's majestic chiming guitars – and his channeling of Gang of Four's Andy Gill on "Bullet the Blue Sky" – the bedrock provided by Mullen and Clayton ... they've never been better.

Sure, there's plenty of production going on, but it tends to be video and lighting production. 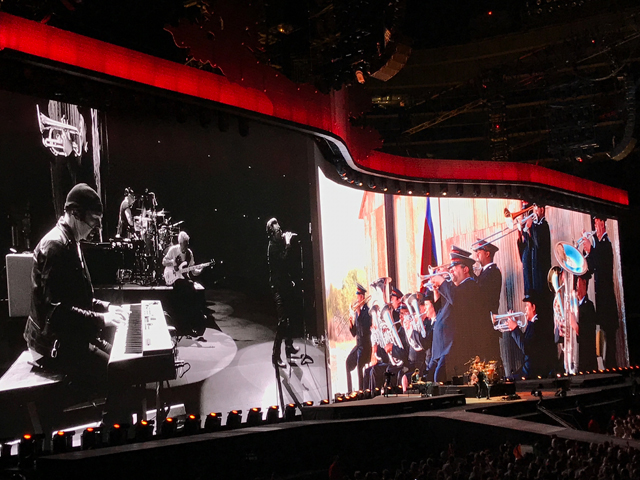 There's very little sequenced or recorded augmentation, other than, say, the scene-setting intro to "With Or Without You," the recorded contribution of the late Luciano Pavarotti on "Miss Sarajevo" and the Salvation Army brass band guesting – via video – on "Red Hill Mining Town."

That last song was inspired by Britain's divisive 1984 National Union of Miners strike and when it was finished, Bono said, "After 30 years we just figured out that song. Sometimes after 30 years a song feels newly relevant. Here's another one...," as the band sprung into "In God's Country."

Other than a vintage film clip with a character named Trump who is exhorting his neighbors to build a wall around their homes for protection, Bono avoided partisanship when talking about the fight against AIDS, the under-recognized contributions of women – which was the subject of a stunning video montage of a wide range of influential women during "Ultra Violet (Light My Way)" – and other timely subjects.

"Left, right and everyone in between, everyone is welcome here tonight," he said, and I paraphrase. "We will find common ground by moving to higher ground."

When Bono contributed harmonica to a couple songs, most notably, "Trip Through Your Wires," it conjured Bruce Springsteen and I realized for the first time the thematic similarities between "The Joshua Tree" and Springsteen's "The River."

While Springsteen dug deep into the heart of the America he knew first-hand, "The Joshua Tree" offered an outsider's view of the country, but one that was no less powerful and no less captivating to millions. Bono told the crowd that U2 loves America, a country he called "magnificent." And he lauded the fact that American taxpayers help fund the drugs to treat millions of AIDS patients.

But he subtly and not so subtly chided us, too, reminding us to reflect. Before "Miss Sarajevo" (now renamed "Miss Syria"), a 15-year-old Syrian girl appeared on screen to explain why she dreams of coming to America.

During the song, Bono recited the famous lines, written by Emma Lazarus in her poem, "The New Colossus:" "Give me your tired, your poor, Your huddled masses yearning to breathe free."

The screen showed images of refugee camps and that young, hopeful Syrian girl in a specially commissioned film by French artist J.R. It was as powerful a moment as I've seen at a concert.

I just hope the folks eating french fries and looking at cat pictures on their phones during the show (yes, these were things I witnessed at a rock and roll gig on Saturday night) were paying close enough attention to get the message. 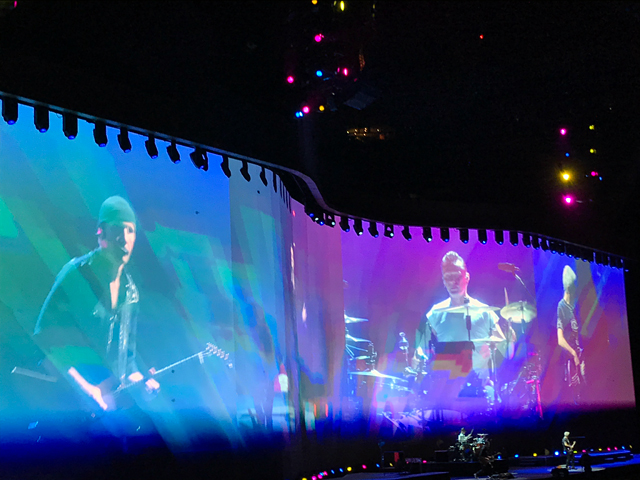 U2, Soldier Field, Bono, The Edge, Chicago, The Joshua Tree