U2 is in the midst of an eight-day, five-gig run at the United Center in Chicago as part of its iNNOCENCE + eXPERIENCE Tour. We went down to have a look and a listen.

Has U2 gotten modest?

The Irish quartet has long been known for full-blown (critics might argue overblown) experiences, on the road – where one thinks back to the extravaganza that was the lengthy Zoo TV and Zooropa Tours – and also on record, where few would use that adjective to describe records like "Achtung Baby" or "The Unforgettable Fire."

Consider, too, the planned week-long Fallon show launch of "Songs of Innocence" last year – derailed by Bono’s bike accident – and the distribution of the record itself, unasked for, into everyone’s iTunes account ... for free.

If "modesty" – or "innocence" – is a word some might have applied to, say, 1981’s "October" LP, it’s rarely cropped up in descriptions of the band's career since.

But, fortunately, U2’s pomp and circumstance have long been tempered with philanthropy and, especially lately, a self-deprecating sense of humor.

Both that sense of humor and modesty were on view as the band played the second night of its eight-day, five-gig run at the United Center in Chicago on Thursday night. 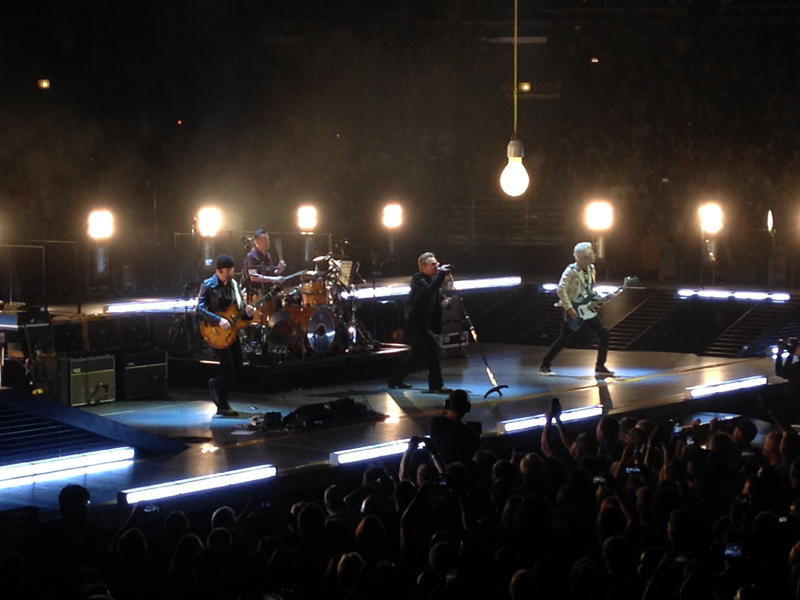 As part of its iNNOCENCE + eXPERIENCE Tour – is that perceived modesty the "innocence" part? – U2 is pitching its tent for these lengthy residencies in a handful of North American cities. After a two-night break, there will be two more gigs on Sunday and Monday, before another pause and a final show on Thursday, July 2.

That's as close as they'll get to Milwaukee this time.

The house lights didn’t dim before the band made its way out on to the ancillary stage with little fanfare – other than Patti Smith’s "People Have the Power," which served as walk-up music. There was no Stravinsky overture, no fog machine, no moody lighting. In fact, it took a moment for many to realize the show was even starting.

When opening the second part of the concert – after an intermission that featured the recording of "The Wanderer" with Johnny Cash from the "Zooropa" LP – the band began playing the as-yet unreleased "Invisible," but was obscured by the video screens and the house lights remained at least partially up. Again, the crowd needed time to catch up.

Even the gear was modest, with The Edge using a bank of five small amps and Adam Clayton relying on a bass amp barely bigger than a bread box. 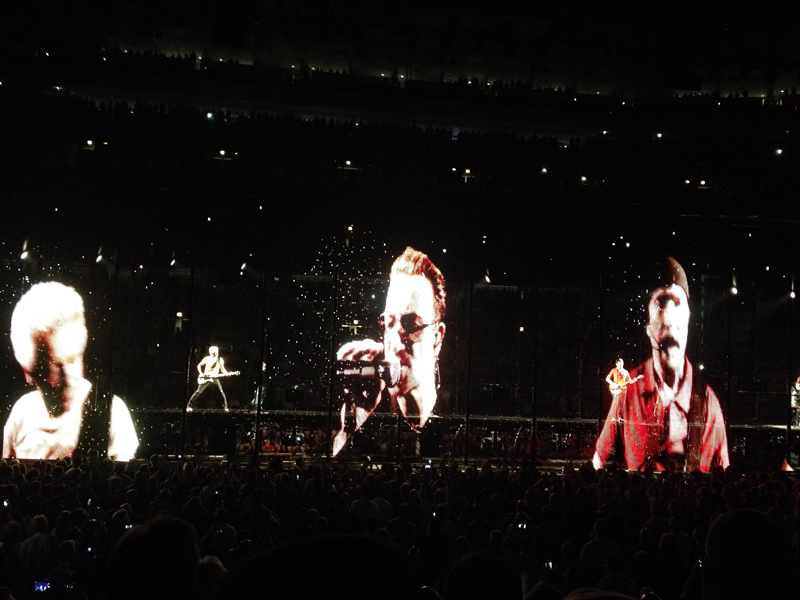 What’s most impressive about the group’s approach onstage is its clear desire to create intimacy where there is little (for example, a basketball arena). The simple main stage inhabited one end of the cavernous space and a smaller stage was at the opposite end, connected with a runway. The effect was to make nearly everyone, at least on the lower levels, feel close to the action.

Above the runway ran a tall, narrow catwalk, the sides of which were giant video screens that flickered with action from the show, animated artwork and images that related to the songs, which appeared to document the band’s history.

Playing songs rooted in that past – like "Cedarwood Road," named for the band’s Dublin neighborhood, and "Iris (Hold Me Close)," about Bono’s mother, who died when he was 14 – and projecting images of conflict in Ireland during "Sunday Bloody Sunday," the band wove a theme throughout the evening. But it was a fairly loose concept, looping in and out of the setlist, and I’d bet few in the audience even consciously put it all together.

Perhaps overthinking it, my theory is that Clayton’s Sex Pistols T-shirt before the break and his Buzzcocks tee afterward were subtle nods to the concept.

The two dozen songs in the two-hour-plus set (including a single, three-song encore) drew on nine of the band’s records, thereby offering an inclusive run through U2’s 35 years of recorded history. 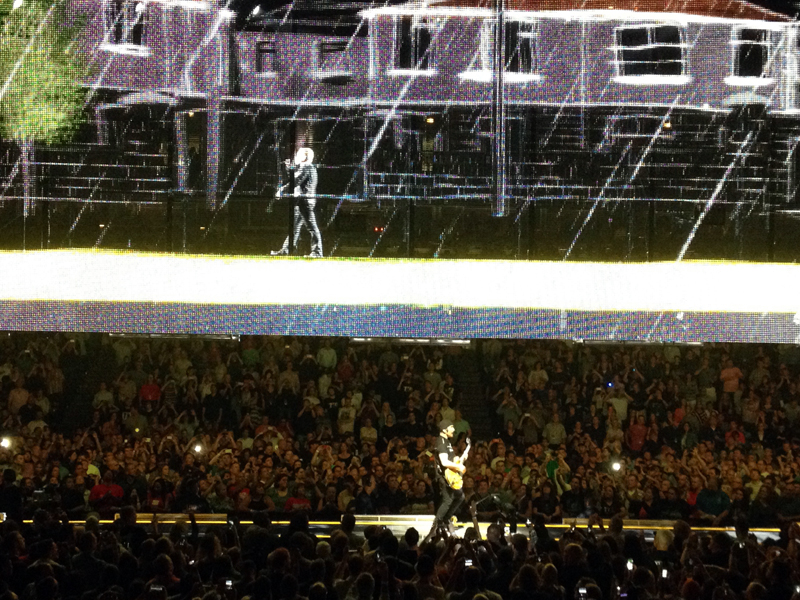 Of course, "Songs of Innocence" saw the most action, with seven of its 11 tunes included. The opening salvo of "The Miracle (Of Joey Ramone)," bare bones readings of "Song for Someone" and a piano and vocal performance of "Every Breaking Wave" were all considerably more powerful than their recorded versions.

As expected, the long-standing favorites were best received – "Pride (In the Name of Love)" "Beautiful Day," "Mysterious Ways," "With Or Without You," "Where the Streets Have No Name."

Best of all, the same four guys who started the band nearly 40 years ago – how often do you see THAT? – were the only musicians on stage, and musically they were unadorned. Into their fourth decade, U2 is not slowing down. On the contrary.

Drummer Larry Mullen Jr. and bassist Clayton grow ever more solid a rhythm section, and The Edge makes it all look easy. This was a power trio in overdrive. 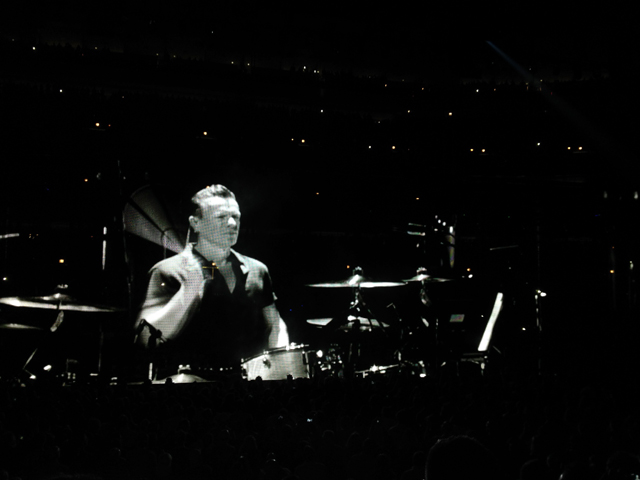 But, out front, Bono – the self-described megalomaniac, who, incidentally, betrayed no signs onstage of the bronchitis he is reportedly suffering – is the one working to bring the crowd onstage (in one case, very literally). And to gauge his success you needed only to witness the final song of the night.

As The Edge intro’d the anthemic "One," the lyrics were intoned – not by Bono (who barely sang a half dozen lines of it), but by the crowd, which sang the entire song, in unison, spontaneously.

How a band could maintain even a modicum of modesty after experiencing something like that is beyond me.

Encore:
City of Blinding Lights
Where the Streets Have No Name (with "Mother and Child Reunion" intro and "California (There Is No Love)" snippet)
One