After seeing a glut of photos on Facebook of Bloody Marys piled high with everything from a half-dozen deviled eggs to an entire chicken, we finally experienced one of these decadent Bloodies at Downtown's The Loaded Slate.

After seeing a glut of photos on Facebook of Bloody Marys loaded with everything from a half-dozen deviled eggs to an entire chicken, I finally experienced one of these decadent Bloodies for myself.

The Loaded Slate offers two different Bloody Marys on the regular menu, but once or twice a month, the bar and eatery serves up a gargantuan cocktail for two called The Ultimate Bloody.

The Ultimate Bloody will be available on May 14, May 28 and June 25. Other summer dates, always Saturdays, will be announced soon.

For $26, a couple – or sometimes a very thirsty and snacky individual – can order a 26-ounce Bloody with a Pabst Tall Boy as a chaser. The Ultimate is made with the locally bottled Jimmy Luv’s Bloody Mary mix, signature seasonings, a splash of Guinness and topped with a dozen or so locally-sourced garnishes.

"We knew Milwaukee was all about the Bloody Mary and so we got outrageous," says co-owner Joe Kuntz. 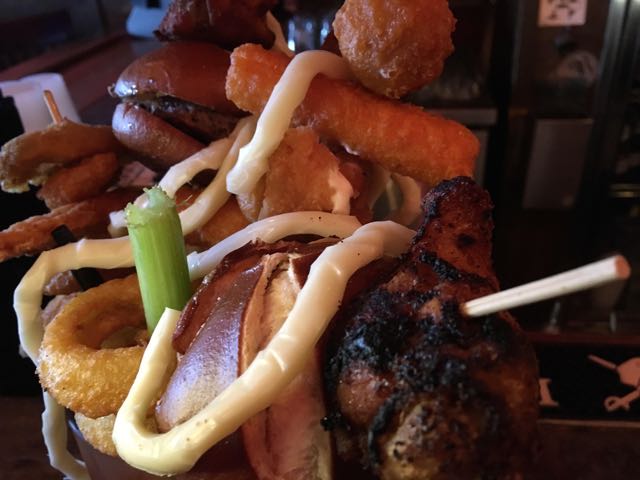 "It’s a meal and a drink for two," says co-owner Doug Daul. "Sometimes people have to get a to-go box for the rest of their Bloody Mary."

When the Loaded Slate first started offering the Ultimate Bloody, they’d make about 10 or so per Saturday. Recently, they’ve made 40-50 over the duration of the day.

"We wanted something that would separate us from other brunch places and it has worked," says Daul. "Our Bloodies come from the kitchen, not from behind the bar."

Kuntz and Daul will celebrate five years of Loaded Slate ownership this August.

"For a small bar, we have a lot of character," says Kuntz. "We treat people like family here. If we don't know you when you walk in, we will when you walk out."