Urban spelunking: A peek inside the old Renaissance Books

For years, many of us were conflicted when it came to the Renaissance Bookstore at 834 N. Plankinton Ave., Downtown. It was a place that was packed with books. Great! But it was also clearly too packed with books. Last week, we went inside to take a look.

For years, many of us were conflicted when it came to the Renaissance Bookstore at 834 N. Plankinton Ave., Downtown.

So much so that the floors appeared to sag and the creaky staircases to list. The shelves were ceiling-high and the aisles not very wide. For as long as I can remember, it had the scent of vintage books, with a whiff of firetrap. 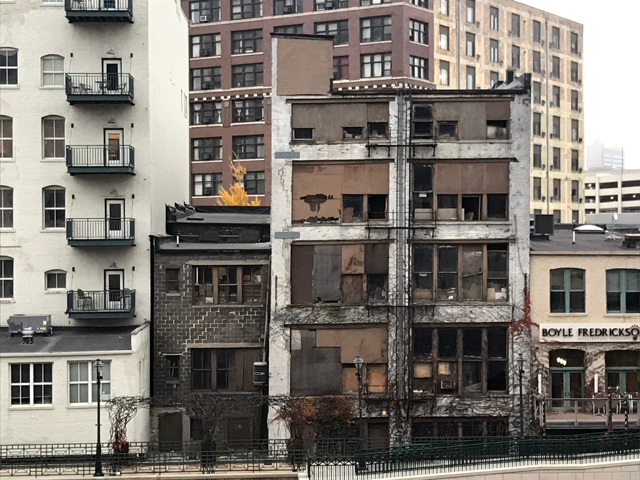 The owner’s battles with the city over the Riverwalk and the building's condition seemed to rage endlessly, which suggested the shop’s lifespan would be limited. But when it closed in 2011, it still seemed something of a surprise. And yet not.

Luckily the Renaissance Bookstore in the airport concourse is still open, dishing up a wide variety of literary gems, and reading like a unique feature that few other cities’ airports can match.

Back on Plankinton Avenue, an engineer’s inspection uncovered structural problems and news reports said the city didn’t want anyone, including the owner, inside. Five years later, developer Tim Gokhman bought the building, along with the three-story building next door. The buildings are connected inside. 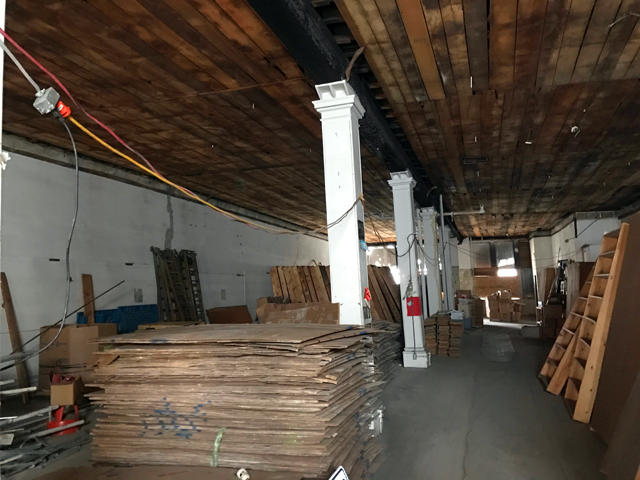 Gokhman told BizTimes he was excited about the possibilities for the site, and the former owner Robert John told the business news magazine that the building was "at the end of its useful life."

Soon after the sale, news emerged that the building would be deconstructed to make way for something new, but when Gokhman met me at the site last week, he said removal of the building – while likely – is not a given.

He has no plans for the site right now and said if someone wants to buy and rehab the existing structure, he’s all for it. But, clearly, he’s skeptical, and with good reason.

"People don’t realize what it’s like inside," he told me just before we donned our hard hats and went in.

First, a little history. The four-story neoclassical/commercial-style building was built in 1895 to plans drawn by Carl Ringer, who designed many commercial, residential and ecclesiastical buildings in the city.

Initially, the building – which spent many years as a furniture store and warehouse – was three stories, with a fourth floor added a few years later, according to a post at Urban Milwaukee. The post details structural issues dating back nearly that far.

Today, Gokhman says that the weight of the books was certainly no help. And as many of us former customers know, there were a LOT of books in there. Later in the bookstore’s life, Gokhman says, even more books were stored there, filling in the aisles between those tall shelves.

Even now after countless dumpsters of destroyed books and many more containers of books donated to Milwaukee Public Schools have been removed, there are many, many, many, many books still inside. 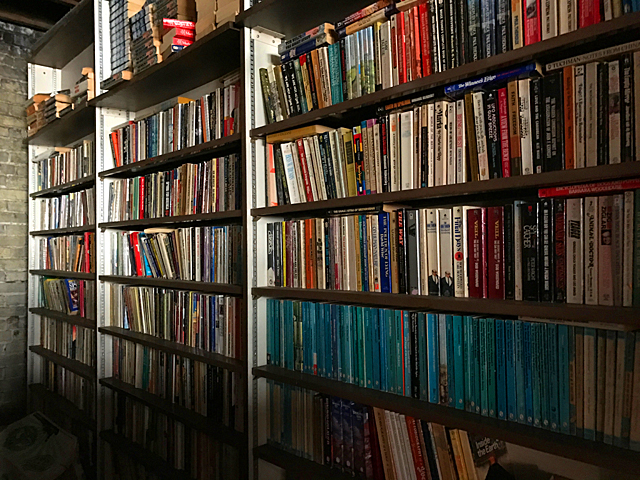 Gokhman is working to get them out – dumping destroyed books and donating the rest – and ease pressure on the structure.

On some floors, the shelving units remain and are still packed with volumes. On another, there are huge cardboard bins full of books that are being donated.

On the top floor, there is an amorphous mass of ice and books (pictured below) created by the combination of a roof leak and the fact that the heat had been turned off in the building. 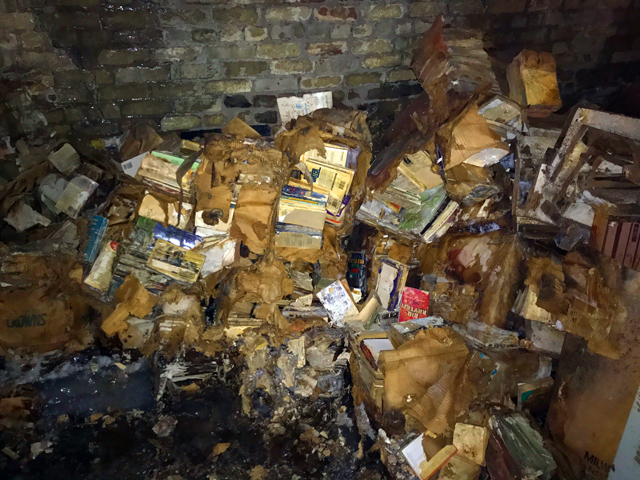 In the basement, there is an upheaval of the concrete floor that would alarm even the most blase of homeowners, but a contractor on site said, "that’s the least of the problems with this building." 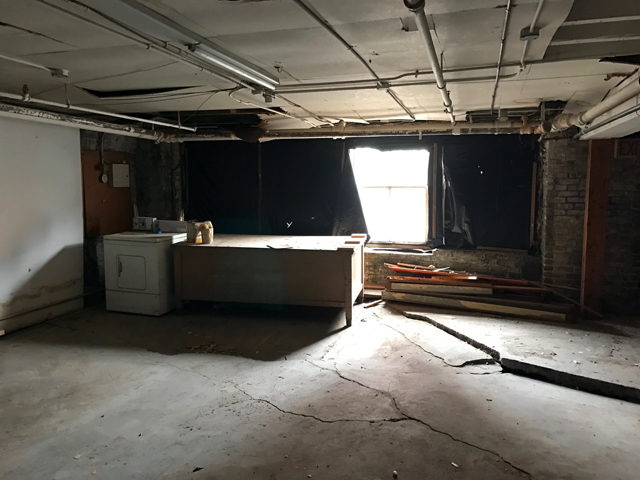 And to the untrained eye, it looks like he’s right. On every floor you can see the ceiling above tilting at alarming angles. Outside, a giant crack opened up in the cornice. From the sidewalk you can see the building's lean.

It’s hard to say what the future of this building is, but its survival doesn’t look good.

Here are more photos from last week's look inside the former Renaissance Books: 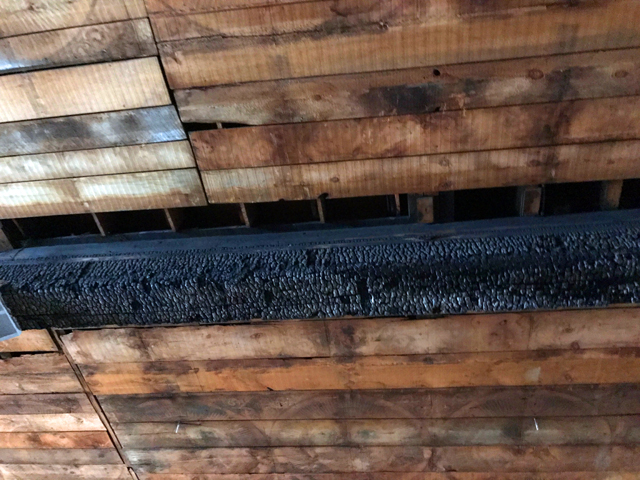 There was a fire at some point, as this major structural beam on the first floor is heavily charred. 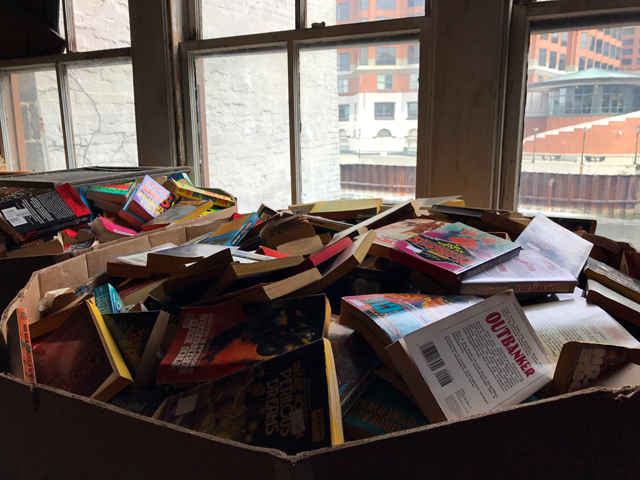 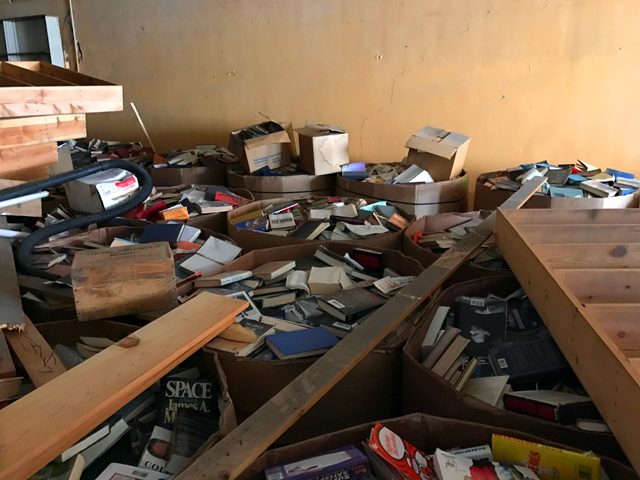 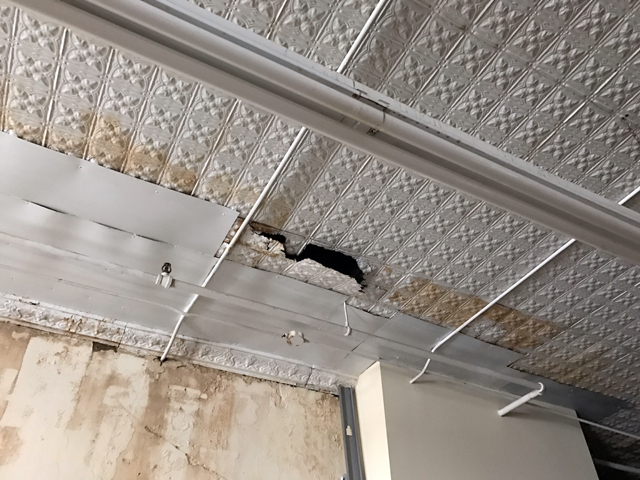 There are beautiful tin ceilings, though they're badly damaged. 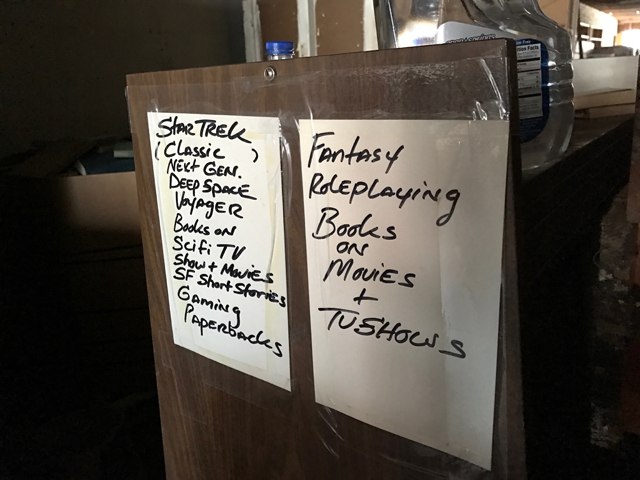 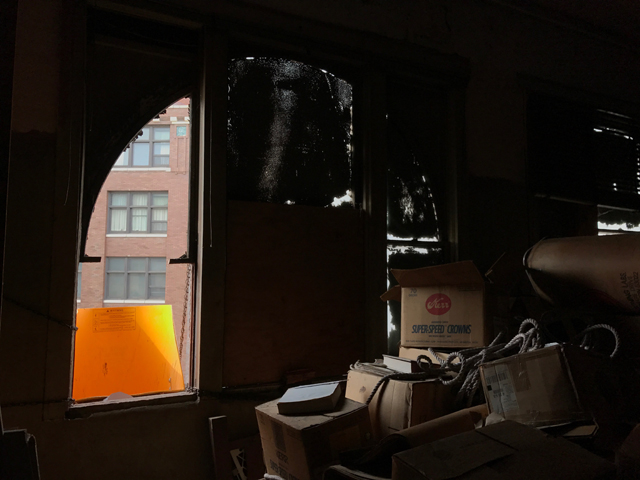 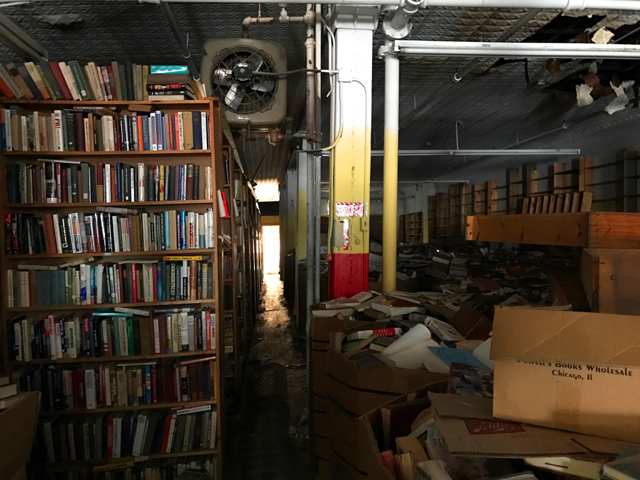