How safe is UWM? The reasons we don't need guns on campus

If we're going to have the "guns on campus debate" - and due to warring pieces of legislation, we must - let's at least argue the issue using accurate information. And according to that information, the University of Wisconsin-Milwaukee campus, if it were a city, would be one of the safest around.

If we’re going to have the "guns on campus debate" – and due to warring pieces of legislation, we must – let’s at least argue the issue using accurate information. And according to that information, the University of Wisconsin-Milwaukee campus, if it were a city – and it sort of is one, like Vatican City is within Rome – would be one of the safest around.

In fact, when you look at crime statistics, the UWM campus emerges as a violent crime-free island within a city plagued by crime despite UWM’s large population (more than 25,000 students, several thousand staff).

So that’s where they want to inject a bunch of guns?

Legislators should instead take that new surplus and give campuses, including UWM, more money for safety measures, like funding more BOSS vans that ferry students around, instead of allowing the arming of a bunch of impulsive undergrads in campus buildings. The legislature’s big budget cuts have made funding such safety initiatives tougher. Ironically.

"Campus crime" at UWM is simply not a compelling reason to arm the campus populations of every single university in the state within campus buildings. Two state legislators, Rep. Jesse Kremer (R-Kewaskum) and Sen. Devin LeMahieu (R-Oostburg), proposed a bill to make it impossible for campuses to ban guns in campus buildings. So much for local control (guess what; the chancellors don’t want this).

The proposal was more predicated on reports of supposedly rising crime around the UWM campus, Kremer said, than it was on mass shootings in other states (not sure why that means we need guns on campus in Eau Claire). In fairness, Kremer made it clear he was not only talking about crime ON campus, but news accounts said he did say gunless students would be "vulnerable targets" on campus too, and he expressly discussed how the bill would allow them to have guns in dorms.

He’s also talking about the dangers students face when they walk TO campus "disarmed" through close neighborhoods. Legally, they can walk to campus armed now if they obtain a concealed carry permit, but they can’t carry the weapon into a campus building. Thus, he’s arguing that they’d have nowhere to put their guns once they reached the campus boundaries, so it’s essential to let them carry them inside.

It’s true there’s some concerning crime in the neighborhoods where students walk. However, crime maps through the city Compass site reveal that the campus area is hardly a crime hotspot in the city; crime is clustered to the west of it. The maps last year don’t seem much different.

How about this solution instead: In addition to using surplus money for safety measures, authorities could just require students or profs to secure their weapons in lockboxes after the supposedly dangerous treks to campus. That should take care of Kremer's concern without injecting a lot of guns into campus buildings, where there is basically no violent crime at all.

If students living in the dorms wanted to carry concealed outside campus boundaries to protect themselves, there could also be a lockbox at the dorms, maybe at the UWM police HQ. This is a realistic concern for some; a student pizza delivery driver was killed once a ways from campus.

But let’s get real: How many students and profs would really carry guns to walk to class from, say, Kenwood to Maryland or from the Sandburg dorms to Bolton Hall in broad daylight anyway? Probably none. I’ve never been remotely scared walking around or near campus during the daytime. How many students (or profs) would carry guns to walk to a night class? Maybe a couple.

On-campus, including in the dorms, it’s actually incredibly safe. The biggest issue? Alcohol. I can’t imagine having a lot of guns in a building where alcohol is an issue would work out well.

UW-Milwaukee provides detailed on-campus crime numbers to the community. The 2014 numbers just released included figures for on-campus, non-campus (which means building or property controlled by a student organization or by campus but not directly on the campus grounds) and public property, which means "immediately adjacent to and accessible from the campus."

Is it safe in the neighborhoods around campus but not abutting it, though?

I once had a police district commander in my class about 10 years ago who told students that, when he looked at his crime maps, the crime was clustered pretty far away from campus on the west side of his district, but the media attention was focused on crime near campus on the east side of his district, which was less prevalent. I always thought that was interesting.

I ran some crime maps on the city Compass site. The clusters of 2015 crime dots (and 2014) are not centered around campus.

In fact, the area around campus stands out because of the lack of crime dots in it. UWM police handle the actual campus, whereas the Compass program I used to run the maps is an MPD statistical thing. So, UWM police statistics won’t appear on the maps. However, the crime stats provided by the university for campus itself (listed above) show that, if UWM police stats were plotted on Compass also, there’d be almost no dots for violent crimes.

If you expand out more, the clusters of dots increase dramatically to the west, far away from walking distance to campus.

Many, if not most, of the dots that do exist around campus probably didn’t involve students at all or involved students at night or on weekends when they weren’t walking to campus. I’d bet many of them have nothing at all to do with campus or students walking to it. Some of the crimes surely occurred inside homes.

One of my students wrote a story years ago when the media were all aflutter about a supposed spike in aggravated assaults that they were pinning on campus. It turned out a lot of those offenses occurred outside bars or inside houses late at night, weren’t close to campus and involved non-students.

So arm students in math class or whatever for the supposed plank walk through campus neighborhoods to campus, especially in the day? Seems silly. Now imagine the wisdom of letting undergrads carry guns in the largely crime-free dorms, where there are alcohol violations (and don’t even get me started on Camp Randall Stadium).

Here’s the 2015 Compass robbery map. I drew a red arrow to show you where campus lies. Students would be likely to walk in the few neighborhoods around it. 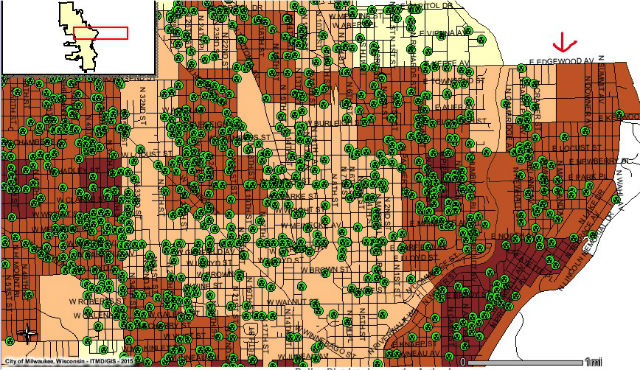 The 2015 Milwaukee homicide map shows that homicide in Milwaukee is a remarkably concentrated phenomenon that rarely touches the east side. Remember UWM police reported no homicides on campus. 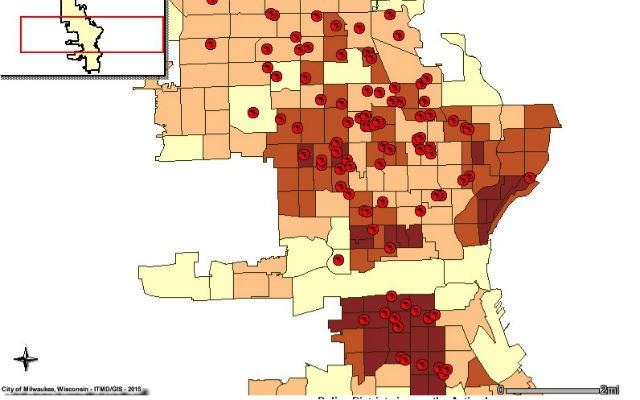 Here’s a zoomed-in map of the areas students would be likely to walk to campus. Yep, no homicides. Since Kremer says crime is up around campus, I ran the same map for 2014. Same thing. None. 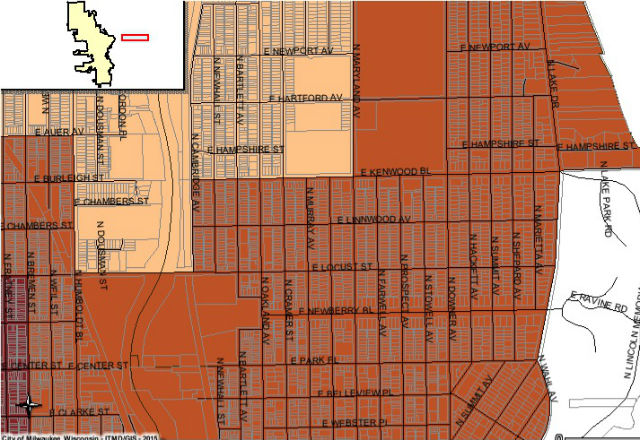 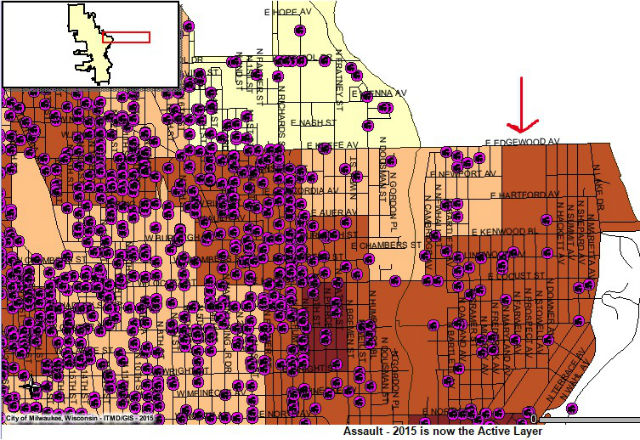 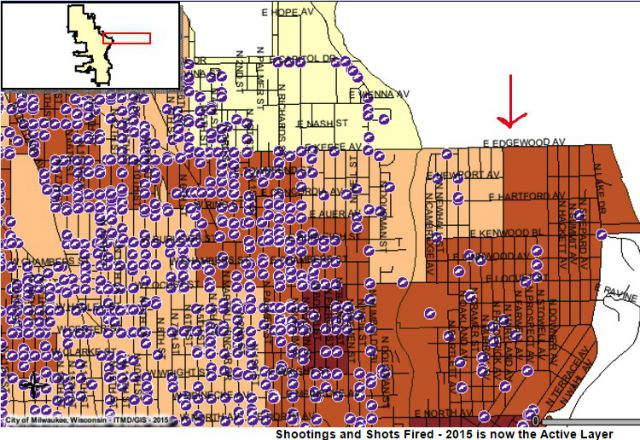 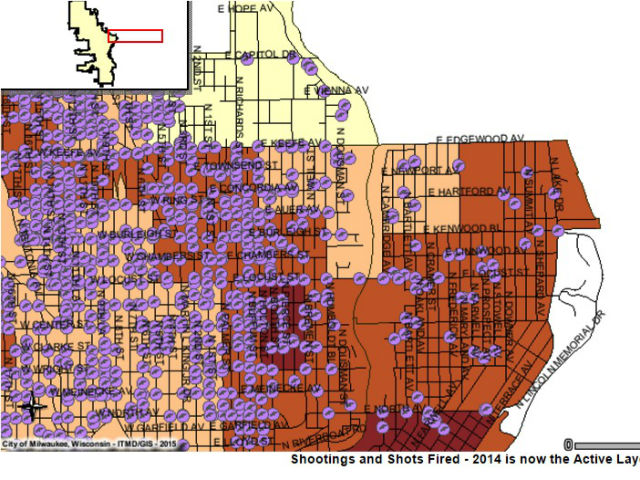 It was basically like that with every crime map I ran. Crime in Milwaukee is stubbornly geographically concentrated and has been for years. Now everything is relative. It’s true that the UWM campus exists in close proximity to areas of extremely high crime, which isn’t true of, say, a campus in rural Wisconsin. It’s true that sometimes violent crimes (including shootings) occur in areas where students live and might walk.

But the fact is that the areas where students would be walking to school aren’t the crime hotspots of Milwaukee at all – and, again, the bill would affect all campuses, not just Milwaukee’s. Imagine how dot-free a crime map would be in, say, Whitewater. Milwaukee is probably a big outlier.

Once UWM students get to campus, they’re in one of the safest neighborhoods in the city (and remember the bill would expressly make it so they could carry in buildings on campus). And surely many of the crime dots didn’t involve students at all or have any nexus to them walking to class.

We should recognize, though, that there are legitimate crime concerns for students. The Emily Willegal case comes to mind. The student was walking to her car from her east side apartment in 2003 when she was attacked, raped and murdered. But, she wasn’t walking TO campus, so nothing in this bill would have altered a thing. Current law would have allowed her to carry a concealed weapon where she was accosted whether this campus carry bill passes or not.

So the reasons for passing this bill seem weak. However, there are potential costs. It seems risky to inject a lot of guns into what can at times be a complex, confrontational campus environment that is packed with concentrations of impulsive, sometimes immature, sometimes intoxicated young people, some of whom have severe mental health issues.

I wouldn’t carry a gun if allowed because I consider campus and its surrounding neighborhoods in daytime to be safe and, anyway, any professor who tried to carry one would probably be branded an instant nut. If I had a night class, I might park inside the student union. I would urge a student walking around at night to call BOSS or drive.

I say all this as a person who supports concealed carry in general. I wouldn’t begrudge a person living in a crime-dot laden neighborhood from carrying concealed. However, campus strikes me as an unusual environment. They don’t let you carry a gun into Lambeau Field, either.

Democratic lawmakers proposed a counter-bill to make it a felony to carry a gun on campus. It’s unnecessary. Their proposal will do nothing to stop mass shootings. Guns are already banned in campus buildings.

Now, the mass shooter argument: If a mass shooter showed up on campus, it would be great if someone had a gun to save the day. But that’s as remote as crime on campus. I don’t want to live in a culture of fear in which people equate campus to Beirut (when it’s not).

We shouldn’t change laws to deal with remote things that likely won’t happen when those laws could increase safety concerns on a daily basis (like guns in campus dorms). My opinions are my own and don’t represent UWM, by the way.

New report: Children killed by guns in Wisconsin on the rise

No more middle of the road trying to please GOP, NRA on gun control