When Dead Bird Brewing opened its doors last September, the buzz was all about the beer. But, six months later, brewery regulars seem to be just as excited about the plant-based dishes and deli offerings on the menu as they are about the brews.

When Dead Bird Brewing opened its doors last September at 1726 N. 5th St., the buzz generated focused (logically) around their beer, which included offerings like their flagship Pamplemousse, an American Pale Ale (5.5% ABV) loaded with Cascade and Amarillo hops and their accompanying grapefruit and citrus aromas.

But, six months later, brewery regulars seem to be just as excited about the plant-based dishes and deli offerings on the menu as they are about the brews.

And there’s good reason for that. Even during the ongoing COVID-19 pandemic, Dead Bird is serving up beer-friendly, carry-out appropriate eats that are as delicious as they are meat and dairy free.

"Before we moved here from Madison, my wife and I drove down to Milwaukee regularly to go to Strange Town, Celesta and Comet," says Nick Kocis, who founded the brewery with partner Jeremy Hach. "The city has a lot of amazing breweries. We also have some really spectacular vegan restaurants. Here we’re really trying to bring both of those together in one place. 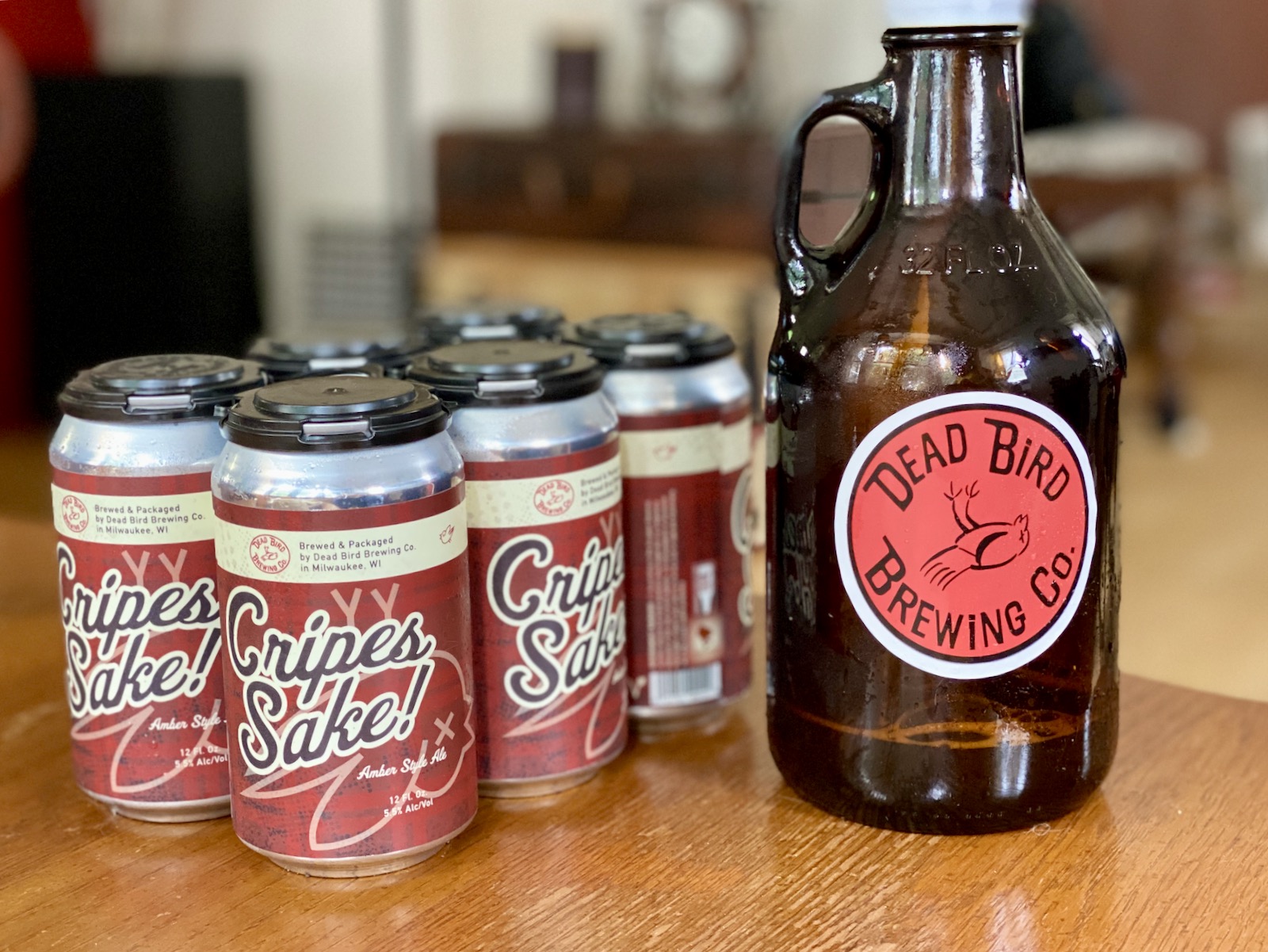 "We weren’t originally going to add a kitchen," says Kocis, noting that they planned to rely on food trucks to satiate hungry guests, "But as the plans came together, we realized we had the space. So we decided to take advantage."

Kocis, whose background includes work in the restaurant industry, took the helm alongside kitchen manager Nick Wersel, a cook whose experience with foraging, fermentation and preservation – along with local supply chain connections – made him a natural fit for the menu Kocis envisioned.

"We’re trying to be as low environmental impact as possible overall," says Kocis. "So in terms of our food, the more we can source locally and support local purveyors and businesses the better." 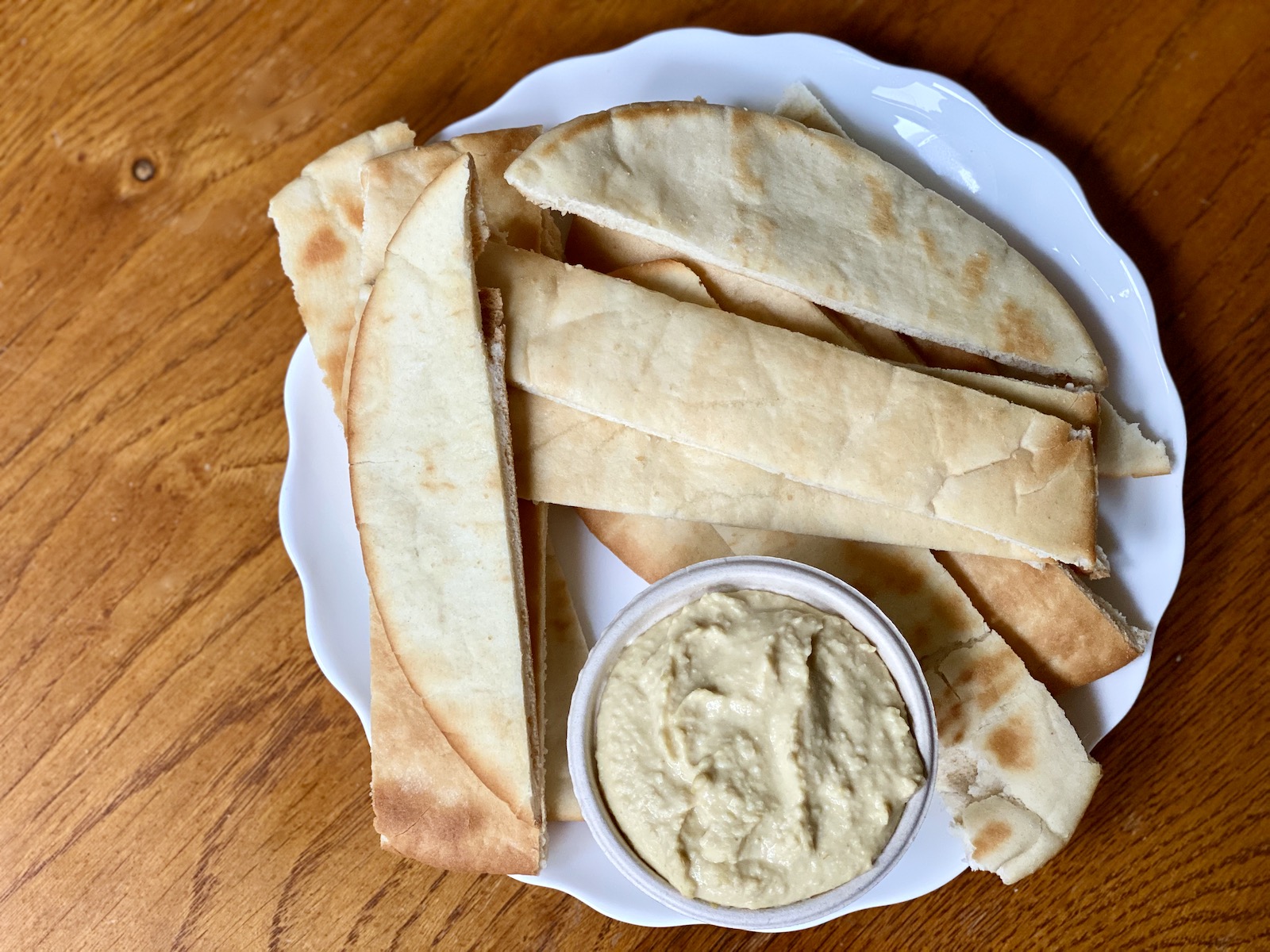 There are also sandwiches, including the TuNo salad sandwich served hot or cold with Violife cheddar on multigrain bread ($10); an Impossible Burger patty melt with cheddar and caramelized onion jam toasted on multigrain bread ($10); the BBQ Chicky featuring shredded bbq chik'un, house slaw and pickled onions on ciabatta ($10); or the Korean Banh Mi with housemade kimchi, carrots, radish, cilantro, sesame, and chick'un with house sauce and gochujang (pictured, $11).  All sandwiches are served with a choice of chips or house sides including coleslaw, potato salad or mac & cheese. 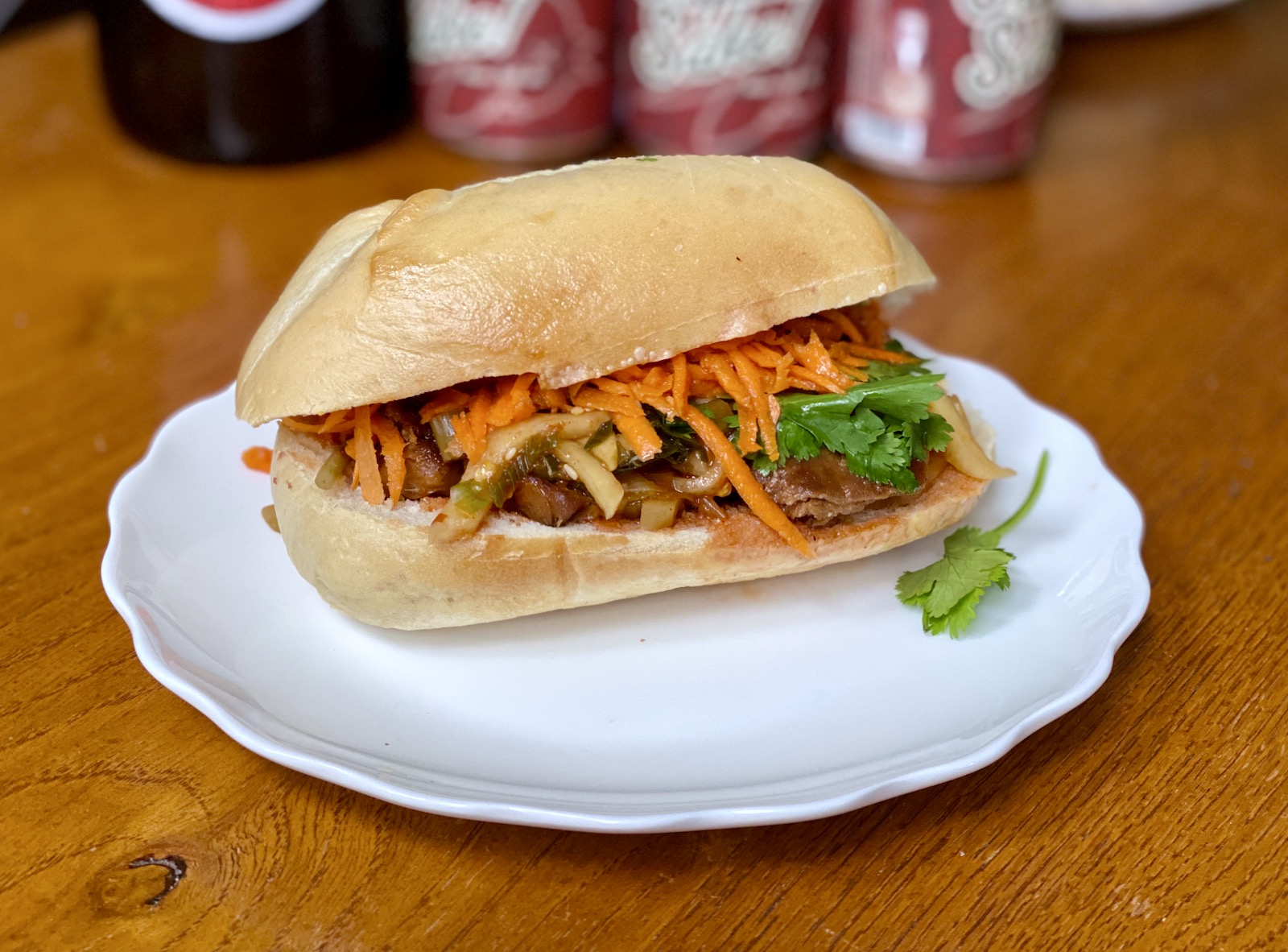 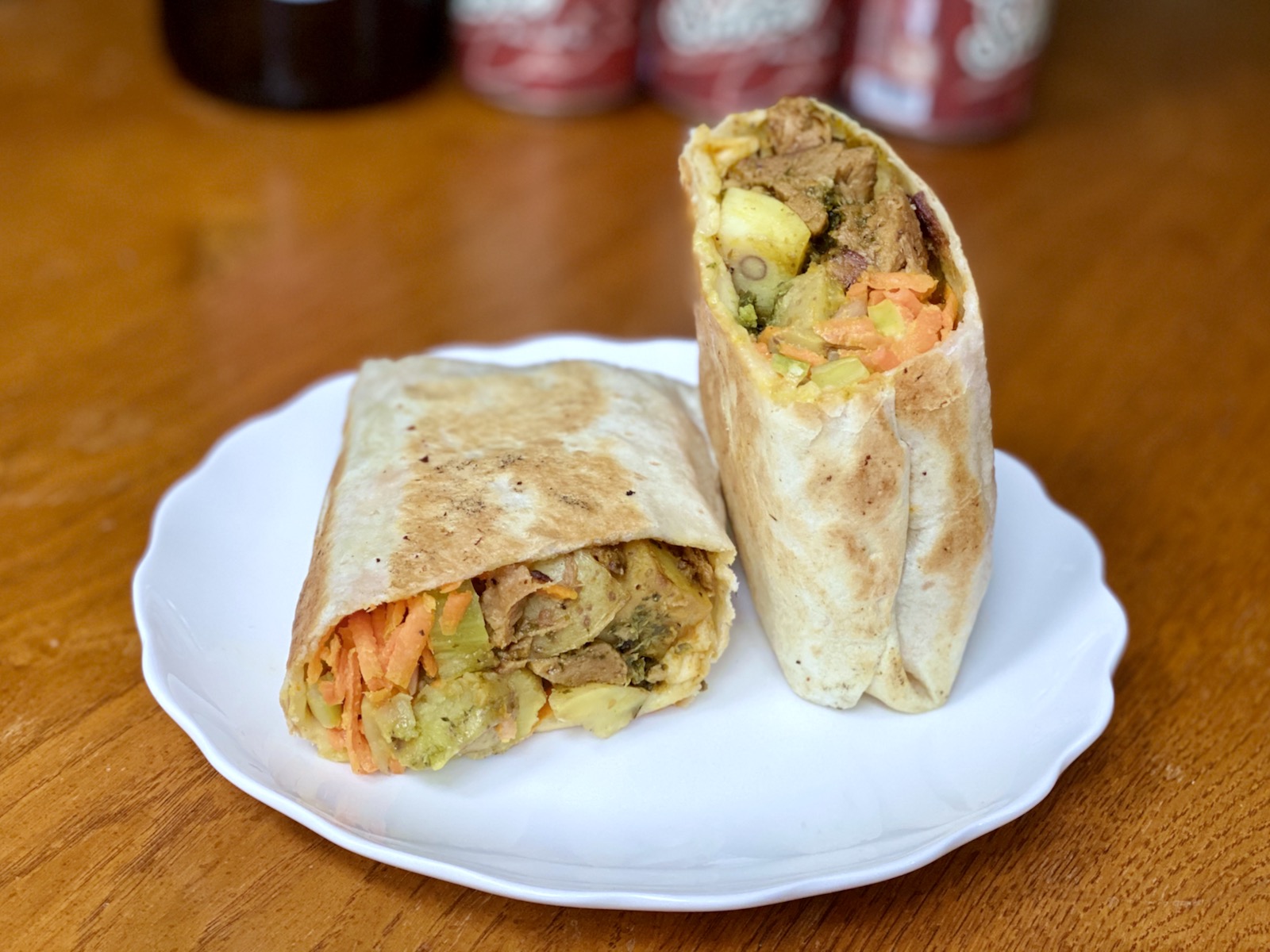 This week, it’s the Crab Cake Oscar Benedict featuring a Troubadour Bakeery English muffin topped with a flakey crab cake (made with heart of palm and chickpeas), hollandaise and grilled asparagus ($15).

Meanwhile, dessert options – including cheesecake every Friday – are procured from Madeline Joanne Ruyle of Bunny’s Bite, a local vegan and gluten-free dessert brand. And the brewery is also launching a partnership with Liv a Little, a nascent ice cream brand founded by recent Marquette University graduate Olivia Menzia.

"We’ll be using her ice cream for our beer floats and milk shakes," says Kocis, "And we’re also working with her to create a number of beer-based ice creams, along with a Dead Bird Big Baby ice cream line.

Plant-based cheese is among a variety of items that Dead Bird makes in house. In fact, Kocis put his background in microbiology to work, creating a sunflower seed-based mozzarella cheese which is used in combination with purchased Violife aged cheddar.

Kocis says he has also begun work on a line of high end fermented cheeses, including vegan Camembert and blue cheese – which will be aged in a small cheese cave on premise. He’s also working to create a house substitute for the Impossible Burgers they currently serve, as well as housemade sausages.

In addition to their regular menu, Dead Bird has also launched the Big Baby Vegan Deli menu featuring their housemade cheeses (by the pound), condiments and sides appropriate to round out a variety of home-based meals.

That includes items like plant-based mozzarella (and smoked mozzarella), vegan bacon, salads, spreads, queso, hummus, house mayonnaise (made with an aquafaba base) and ranch and Caesar salad dressings. 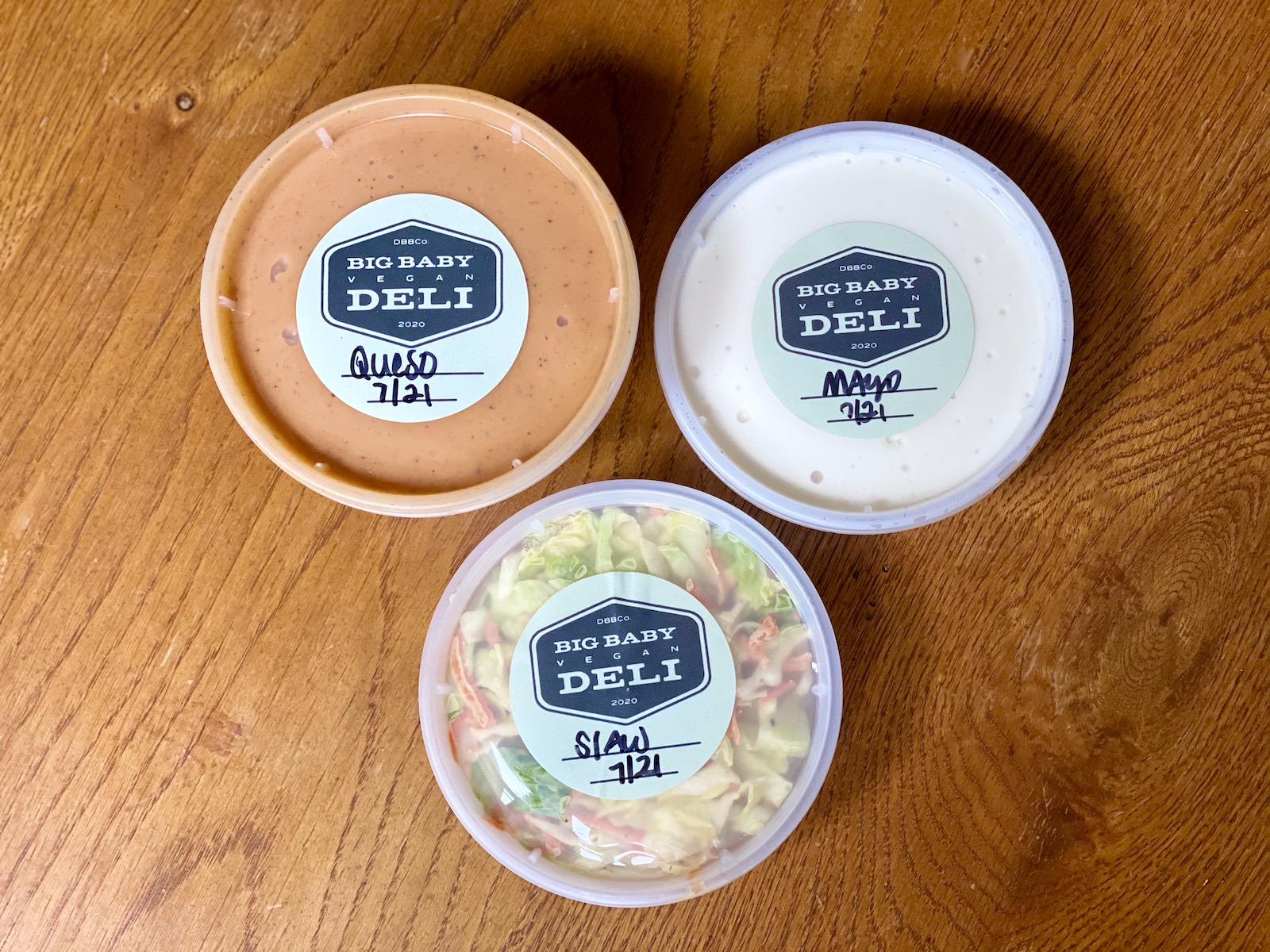 A few of the items – including the ranch dressing – are regular purchases for Dead Bird customers, who’ve been known to make weekly pilgrimages to the brewery for their weekly condiment supplies. That’s good news for Kocis, who says he’d love for the brewery to fill a need for vegan staples.

"I really want people to think of us as another grocery stop," he says. "Even while we’re doing curbside pick-up, we’re happy to run out a tub of mayo to you. If you just want potato salad for your socially distanced barbeque, that’s great. We can deliver on that too." 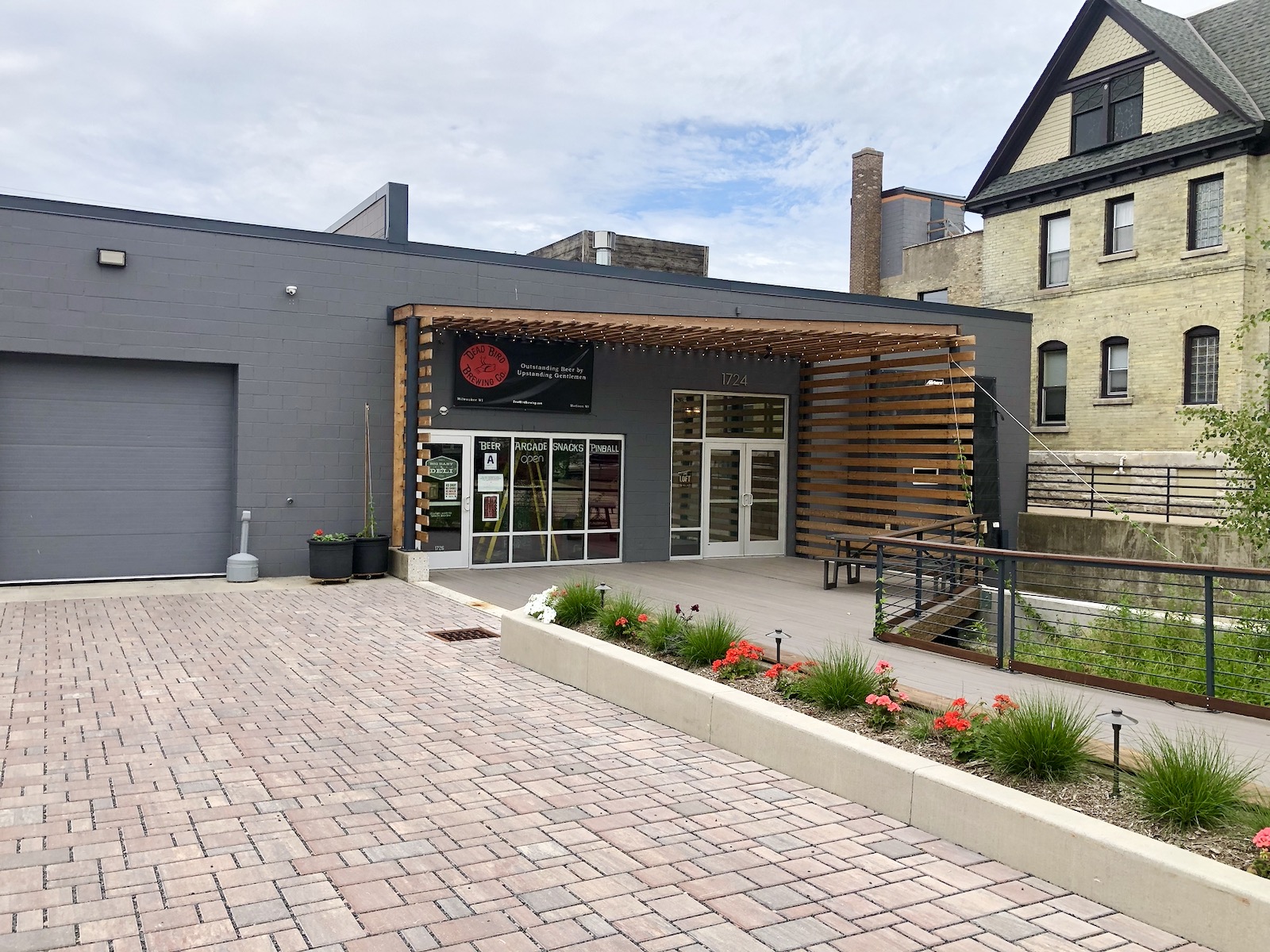 Kocis says that, while they don’t have immediate plans to reopen the tap room anytime soon, they are working hard to make their 800 square foot patio space more amenable for customers. That includes adding furniture, sun sails and patio umbrellas to create shadier areas protected from the harsh afternoon sun.

They also have four batches of of beer in the works, which should be ready within about a month. That includes a re-release of their Literally Just Orange, a hazy pale ale which will be available in cans; a new batch of their flagship Pamplemousse; a new Black is Beautiful stout collaboration made with Sunshine Brewing in Lake Mills; and Paloma Gose made with pink Himalayan sea salt and ruby red grapefruit and then aged on tequilaed oak.

Any one sounds perfect for sipping slowly on a beautiful urban patio in the late summer sun.

Currently, Dead Bird Brewing is open Tuesday through Friday from 3 to 8 p.m. and Saturday from noon to 6 p.m. Hours may be expanded when they open their patio to the public in the coming weeks.