With Mid-century Modern all the rage since "Mad Men" and now that we all love "Schitt’s Creek," too, is the motel fashionable again?

Revamped vintage places like these would seem to say there’s plenty of life left in the motor hotel, the popularity of which boomed with the explosion of car culture in the 1950s and ‘60s in America.

Thanks to Adam Levin and the Old Milwaukee Facebook group for some of these images. 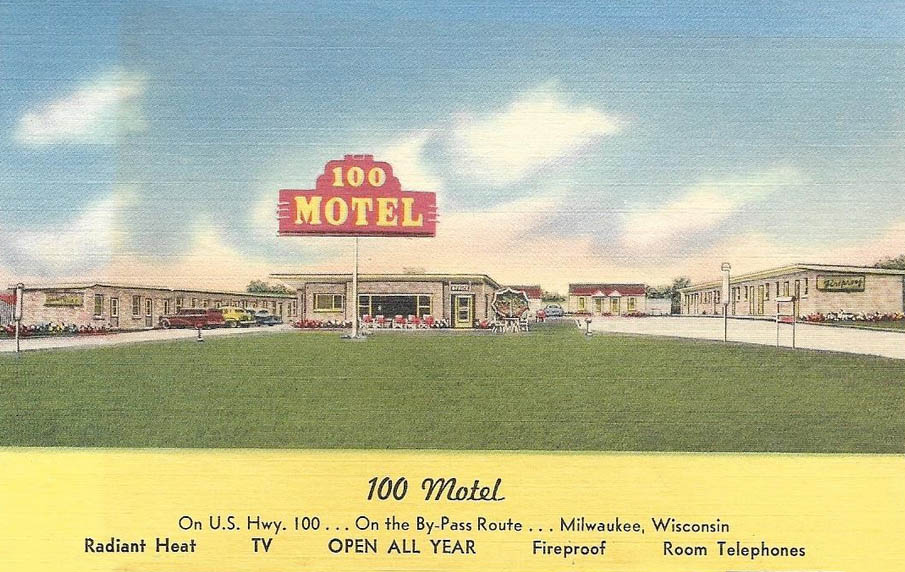 Now gone and replaced by an apartment complex, 100 Motel – open year round! – had a distinctive red sign and a sprawlin complex of low-slung buildings, two miles north of Capitol Drive on Highway 100. Inside there were tile baths, tubs and showers, carpeting, radiant heat, TV, fireproof, room telephones and air conditioning. In addition, it was a ticket agent for the S.S. Milwaukee Clipper ferry to Muskegon and could sort out your reservations for you. As the postcard noted, the motel was "on the by-pass route ... 15 minutes to the heart of Milwaukee." 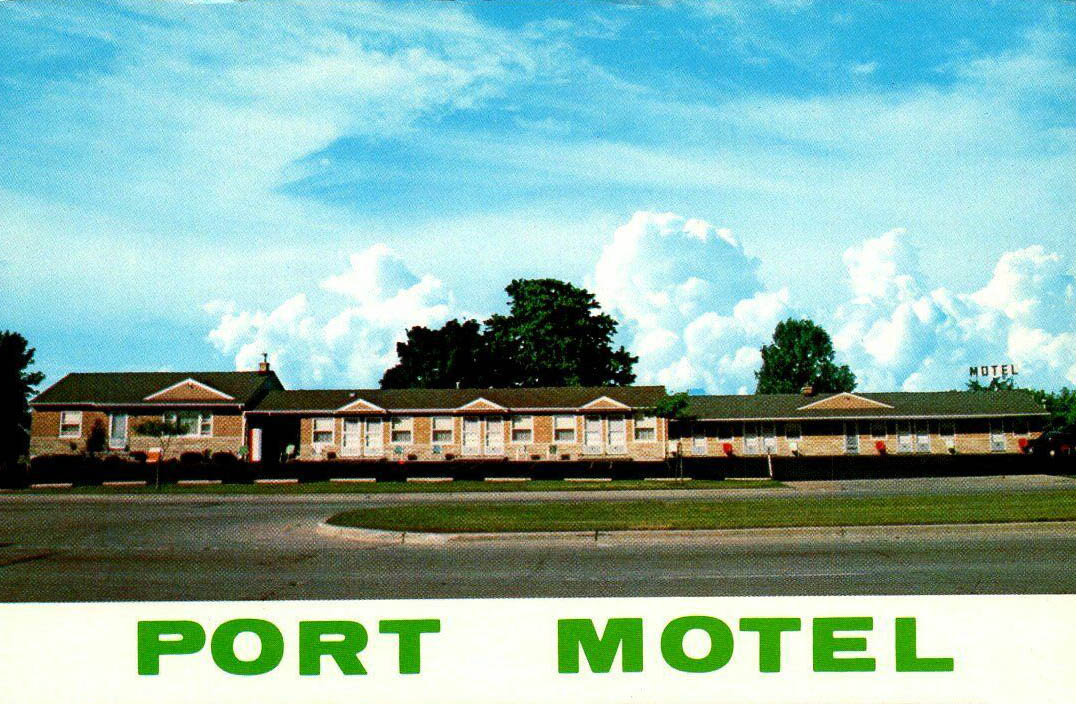 The Port Motel, which has the look of having been built in stages has two lodging sections attached to a private house – all adorned with little matching gables – is a bit of an optical illusion. An earlier black and white postcard has a photo taken from a different angle in which you can see that the section at the right is a separate building, located a bit further back. The 1960s era postcard offers this basic description: "Color television – air conditioned – private bath with shower – carpeting." The earlier card notes the owners as Marcel and Norma Laventure. Not only is the building still there, the Port is apparently still open. 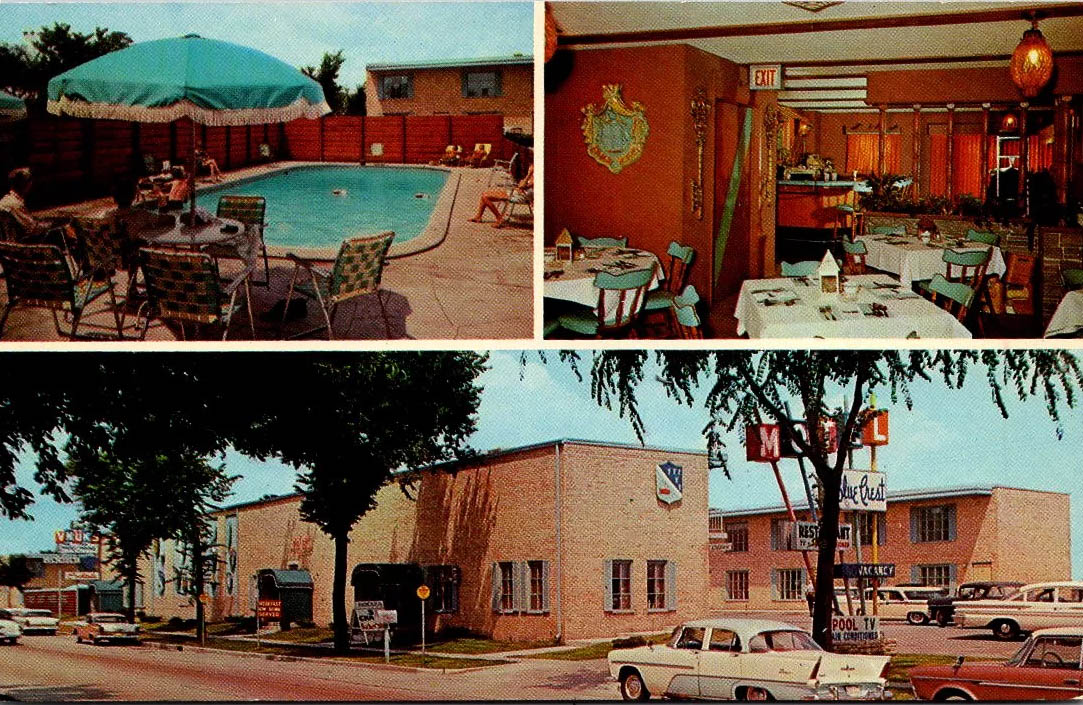 Motels in Milwaukee must have been popular with visiting baseball fans because numerous postcards, including this one from 1960, refer to the distance to County Stadium. This one, now demolished, says it was "15 minutes to Braves Stadium," reminding us that it was before Interstate 94 was constructed. The Blue Crest, which boasted its own teletype number, also had, in the words of this card, "66 modern air-conditioned rooms with T.V. and 24 hour phone service. Heated swimming poll. Meeting room facilities for groups accommodating 10 to 125 people. Coffee shop, dining room and cocktail bar." 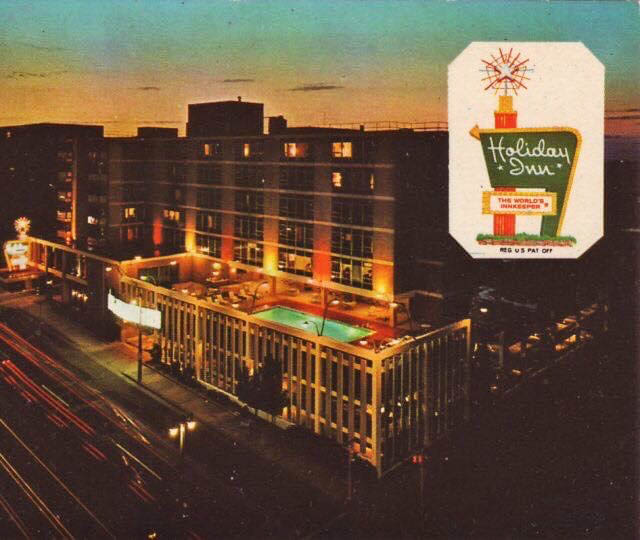 The Holiday Inn chain of hotels and motels dates to 1952 and quickly became a trusted brand among motoring families thanks to its uniform approach and seemingly countless locations. This 1965 postcard shows the former Coach House Motor Inn, which had just been rebranded a Holiday Inn. In September of the previous year, the seventh floor had been the Beatles’ home base during their sole visit to Milwaukee. Now it’s Marquette University’s Mashuda Hall dorms. In ‘65 it was home to the Carriage Restaurant and the Coach Room Lounge. 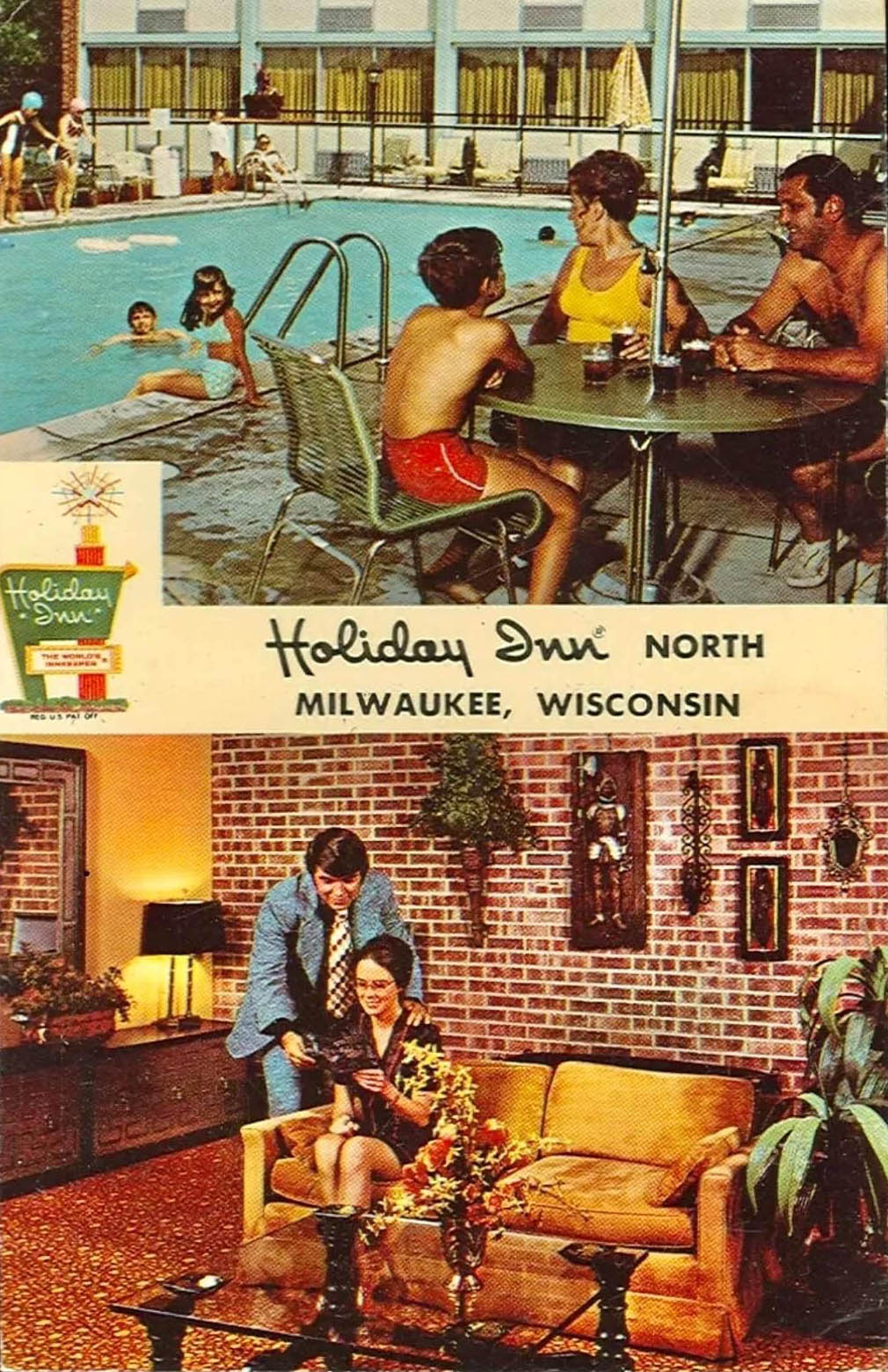 Torn down and replaced by a La Quinta Inn & Suites, the Holiday Inn North looked like the place to be, especially if you had a family in tow and wanted to test our your new swim cap. Just 10 minutes from Downtown Milwaukee, the card notes, it had, "exquisite guest accommodations, meeting facilities and a restaurant and lounge." 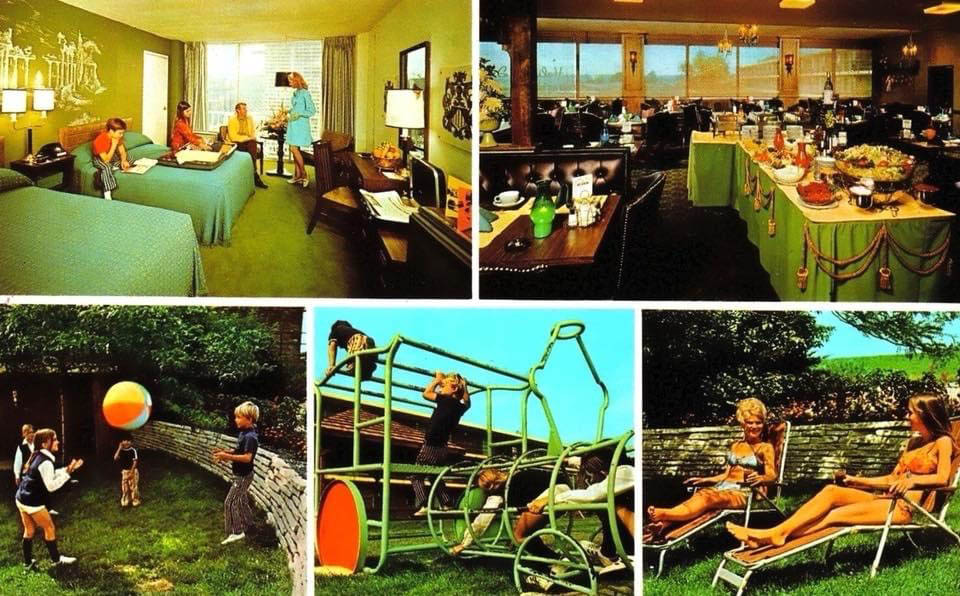 This Holiday Inn location, which opened in 1965, was so representative of the brand that its image was used on generic Holiday Inn postcards used to promote properties in other states. Replaced by an Ascension medical facility, this place offered, "exquisite dining in our Red Lantern Restaurant ... cocktails served in the old English setting of our Red Fox Tavern ... (and) playground facilities for the children." 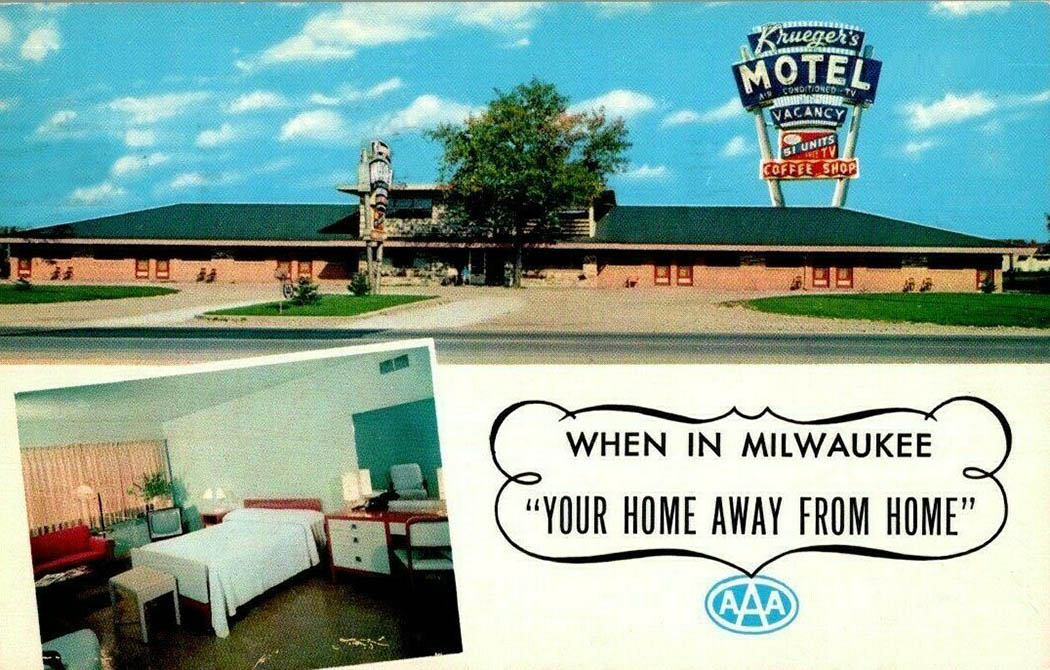 Razed and replaced by an Advance Auto Parts on the corner of Cold Spring Road, Krueger’s claimed to be, "Milwaukee’s finest," with "51 rooms with all the latest conveniences. Air conditioning, wall to wall carpet." It also had a lunch counter, at least in its earlier days. It appears to have, at some point, undergone a renovation or reconstruction in a Colonial style. The photo here is on the earlier iteration. 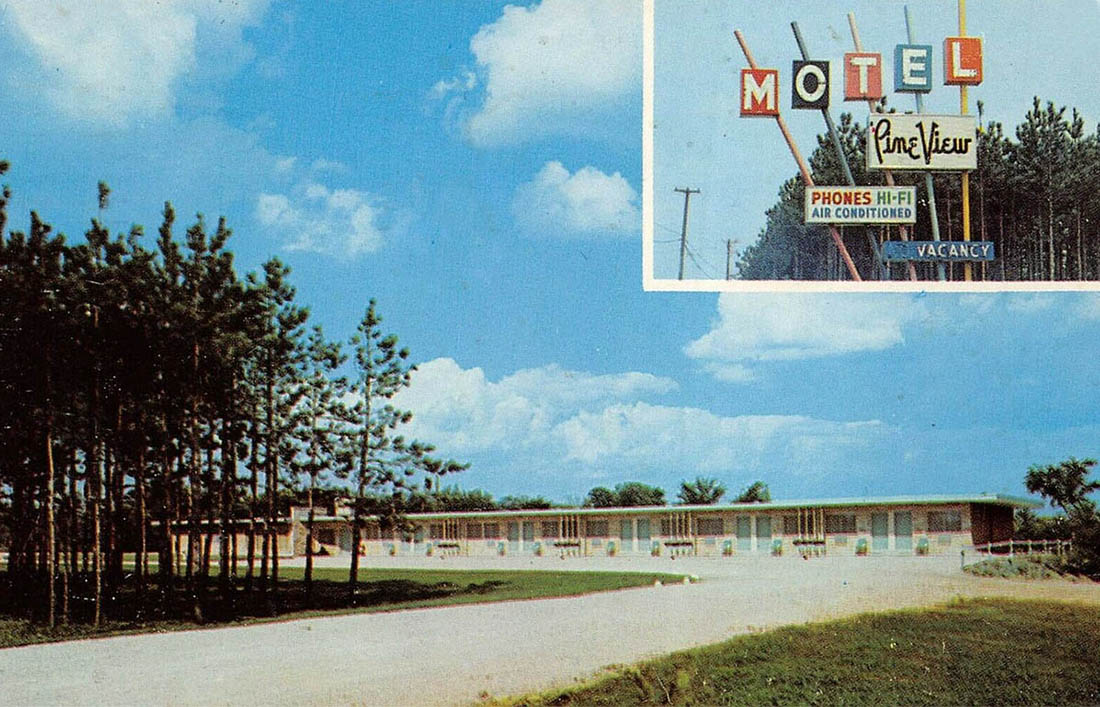 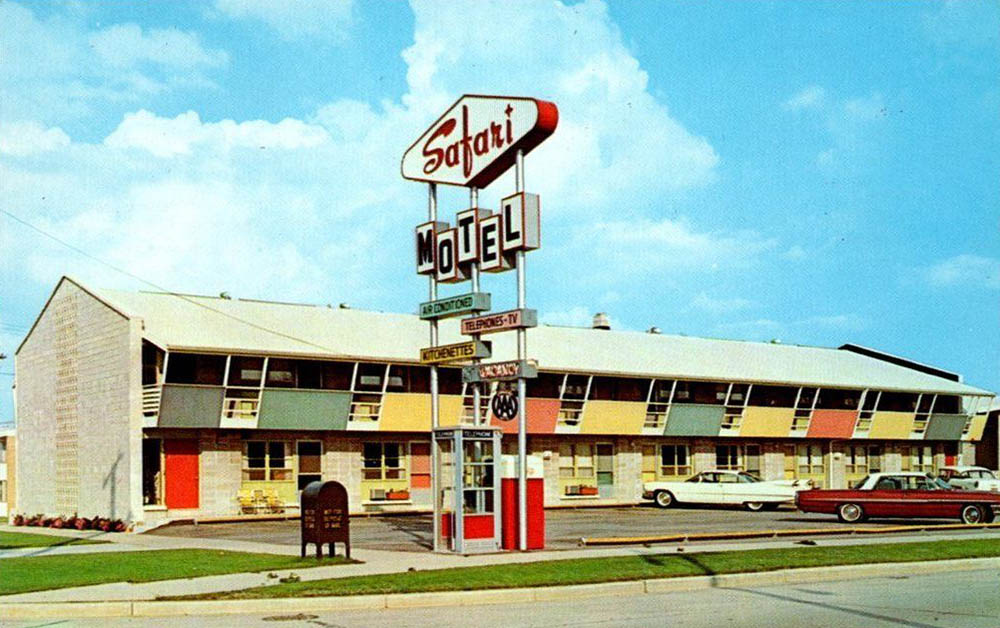 This distinctively colored building survives – without the variegated panels – as the American Inn Motel. This 1961 postcard says that the Safari – run by Ed. Tegge and Marv Erickson – had, "35 modern air conditioned thermostat controlled heated units. Free TV. Telephone service. Moderate rates," and was, like the Blue Crest, "15 minutes from the heart of the city and the Braves Stadium." (The card did not mention the convenient mailbox and phone booth located in the parking lot.)