On Saturday, Nov. 5, the Archdiocese of Milwaukee swings open the doors to four parishes around Milwaukee to welcome the community in for behind the scenes tours. We're writing about all four parishes before the event. Today, we visit Our Lady of Guadalupe/Holy Trinity in Walker's Point.

On Saturday, Nov. 5, the Archdiocese of Milwaukee swings open the doors to four parishes around Milwaukee to welcome the community in for behind the scenes tours and more. We're writing about all four parishes before the event. Today, we visit Our Lady of Guadalupe in Walker’s Point. 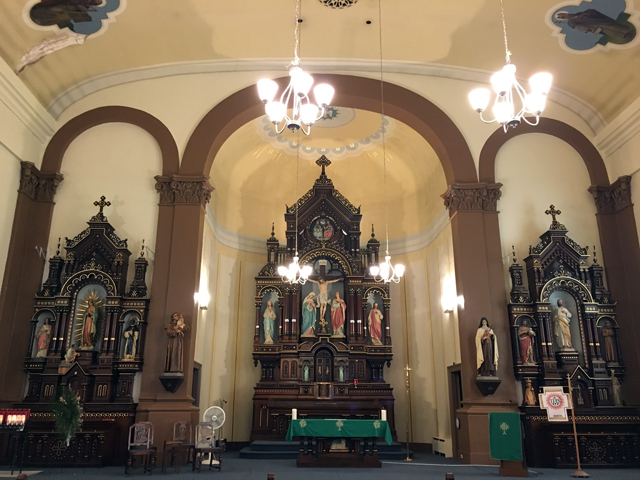 Our Lady of Guadalupe, 605 S. 4th St., looks like a classic old Milwaukee church and, you know what? It is.

Built as Holy Trinity in 1850 to serve German and Slovenian immigrants in the neighborhood, it is the third oldest Catholic Church in the city, after Old St. Mary’s and St. John’s Cathedral, both built in 1847 to plans drawn by architect Victor Schulte, who, surprise, also designed Holy Trinity. 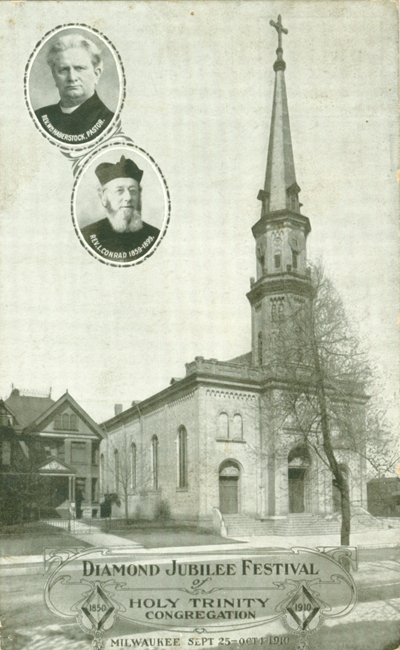 According to H. Russell Zimmermann, who mentioned the architect in a piece he wrote for Milwaukee Magazine, "Schulte (was) an immigrant from Westphalia, Prussia. He first settled in Pennsylvania, where he worked building railroad bridges. In 1840, he moved to Milwaukee and was able to land four prestigious commissions with the newly formed Catholic Archdiocese.

These resulted in three other landmarks, all still standing and among the oldest buildings in town: Holy Trinity Church at Bruce and South 4th Streets, Henni Hall at St. Francis Seminary at 3257 S. Lake Dr., and (St. John’s Cathedral)." 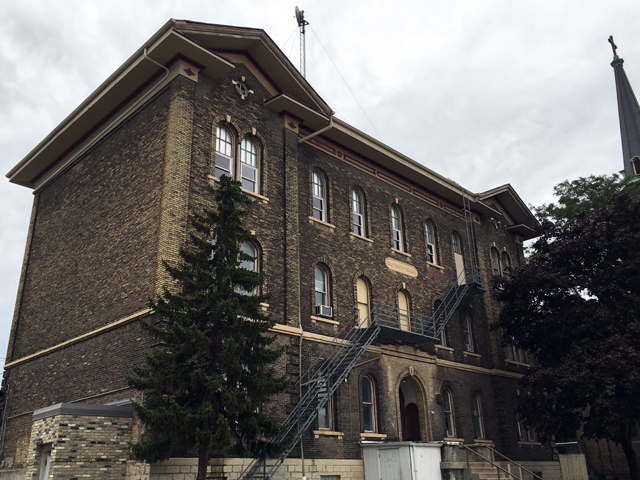 The old school next door (pictured above, and separated from the church by a beautiful 1892 Queen Anne-style rectory designed by Schnetzky and Liebert), however, dates to 1853 and is the oldest surviving schoolhouse in Milwaukee, edging out the old Jefferson School by five years. A stone on the left side of the entry marks the construction date. Opposite it is another stone noting that the school was rebuilt in 1867. 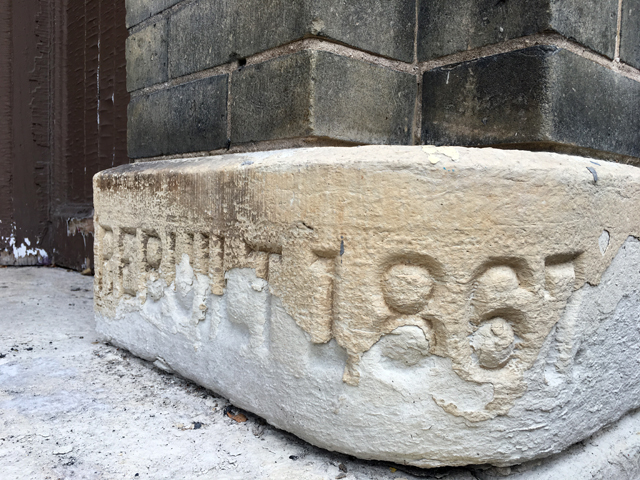 Though the original porch was still there when Zimmermann wrote about the building in his "Heritage Guidebook," calling it "an excellent and unspoiled example of Victorian Italianate design," it’s now gone. All you can see is the subtle change in the color of the brick outlining its position. 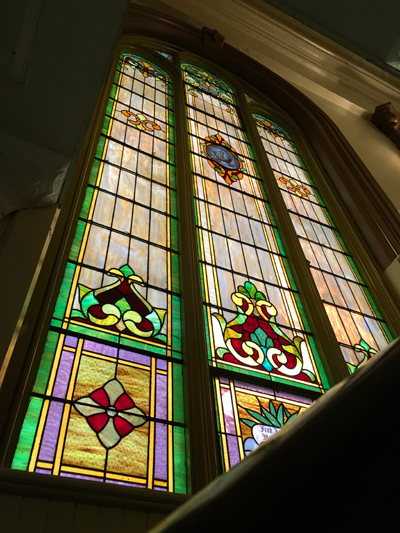 These days the school is rented to the Montessori Institute of Milwaukee, but in the past it was home to Bruce Guadalupe School, which is now housed at the United Community Center on South 9th Street.

The latter had begun as a mission on 5th and National in 1926, becoming a full-blown parish church on 3rd and Washington in 1946.

Since 2006, Our Lady of Guadalupe has been administered by Jesuit priests and at the moment, it shares clergy with nearby St. Patrick’s, on 7th and Washington Streets. 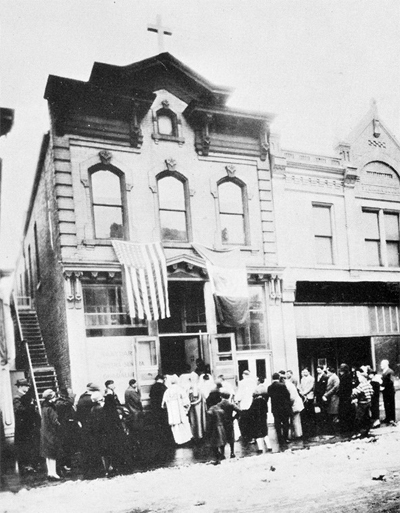 The original Our Lady of Guadalupe mission. (PHOTO: Courtesy of Archdiocese of Milwaukee)

When you visit, don’t forget to take a peek at the former School Sisters of Notre Dame convent (picture just below), also the work of Schnetzky and Liebert and built in 1888, around the back on Bruce Street. 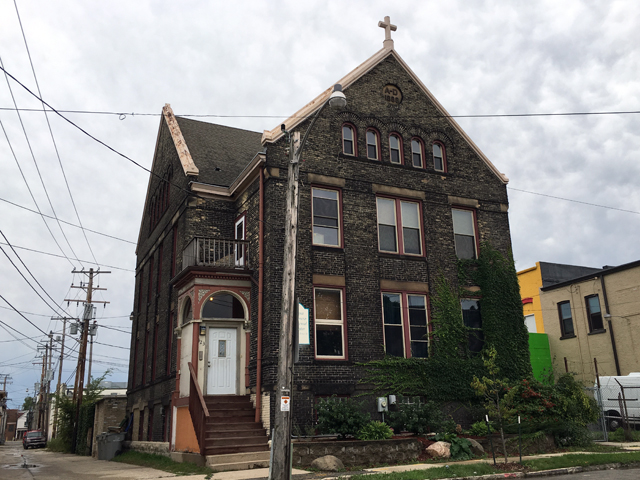 The church itself is quite attractive and is an amalgam of work by different architects. While Schulte did the main section in 1850, the distinctive octagonal steeple atop a pair of graduated octagonal sections was added in 1862 and designed by Leonard Schmidtner (St. Stanislaus).

Renovations were apparently undertaken in 1863 and 1873. The bells were added in 1869 and the pipe organ followed nine years later. 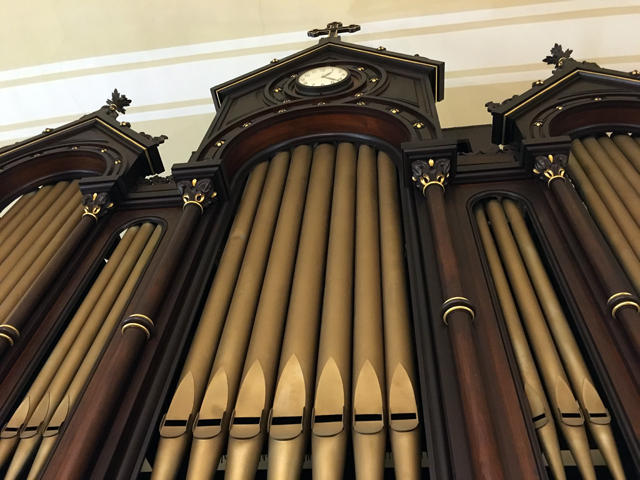 "Holy Trinity is influenced by German Zopfstil architecture, a baroque variation of classical design," notes the building’s entry in the Wisconsin Historical Society’s Architectural Inventory. "It was popular in Germany in the 1840s, as the first wave of German immigrants arrived in Milwaukee. 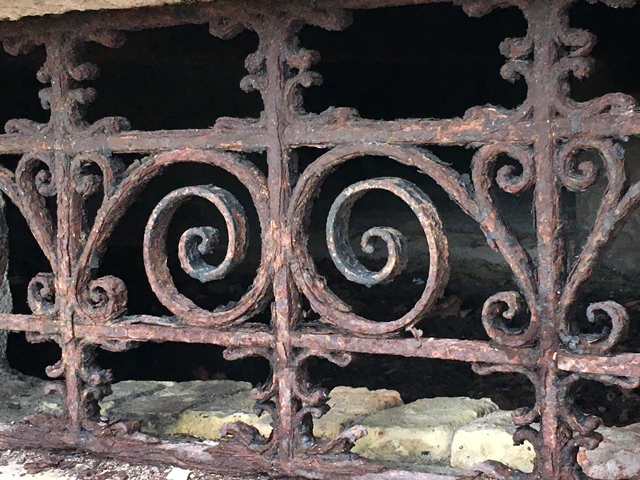 Decorative ironwork on the rectory porch.

"Holy Trinity exhibits a ‘pioneer’ simplification of Zopfstil design, with modest baroque elements. Its restrained Zopfstil influences include its round-arched windows, a large tower centered on the front of the building, and a low-pitched roof. The chaste facades have plain brick pilasters defining each single-windowed bay. Brickwork accents include round-arch corbeling around the building, and a "paneled" balustrade and blind, round-arched windows on the main elevation. The church interior retains its mid-nineteenth-century decoration."

Inside, the sanctuary has an elliptical ceiling dotted with frescoes and the walls have decorative pilasters between the gorgeous stained glass windows in warm, subdued hues. 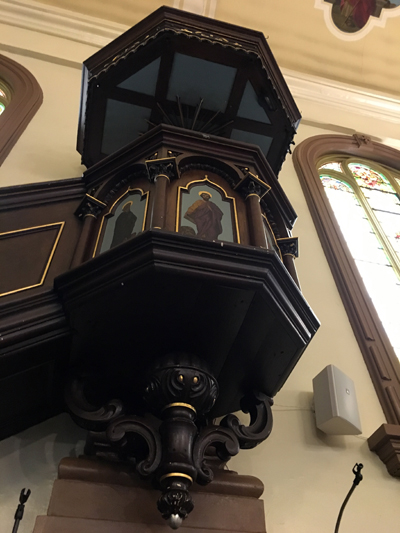 The three wooden altars – executed by Aegidius Hacker of La Crosse – date to 1890. The choir loft and the raised pulpit are also handsomely crafted in wood.

If you’re lucky, maybe they’ll let you pull the ropes in the narthex to ring the bells.

While you’re there, notice the transom window above the entrance to the sacristy, still inscribed with the name "Holy Trinity."

The name also lives on up in the school gym – which also has antique basketball hoops, a 1947 mural and a distinctive stage with a moat and a well-worn rail running along its curved edge – where the initials HT are painted at center court. 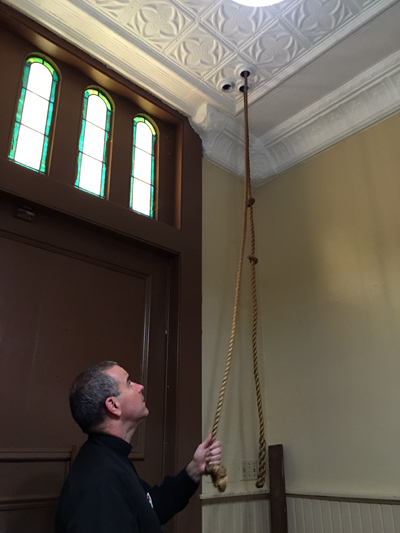 At the VIP event, there will be performances by the church’s children’s choir, and maybe a youthful mariachi band, too.

You’ll get behind the scenes tours and food trucks will be on hand selling ethnic foods.

When you’re done, walk around the corner to Brenner Brewing, 706 S. 5th St., and get $2 off tap beer when you mention the VIP event. A dollar from every sale goes back to the church as a donation from Brenner Brewing.

Complete details of all four churches taking part in the VIP event are here.

Read my story about Saint Bernard Parish in Wauwatosa here, about Bay View's Immaculate Conception here and about All Saints here.