Soon, Milwaukeeans will be able to access information generated by a new City as Living Lab (CALL) initiative, called WaterMarks, that aims to educate residents about water usage and the flow of water through the city's infrastructure.

Soon, Milwaukeeans will be able to access information generated by a new City as Living Lab (CALL) initiative, called WaterMarks, that aims to educate residents about water usage and the flow of water through the city’s infrastructure.

WaterMarks will drop lettered markers showing the locations of different water resources throughout the area to help keep residents updated on programming related to those systems. The markers will be linked to a new smartphone app.

There will also be a feature much like the one generations of Milwaukeeans have looked to for weather information.

The Jones Island smoke stack will be illuminated to serve as a water system status update. Blue light will mean the system is functioning normally, while red will warn of impending rains to let residents know that they can scale back their water usage to help assuage a deluge into the system.

The initiative was developed by the New York-based CALL and Marquette University and will run with the cooperation of the Milwaukee Department of Public Works, Department of City Development and the Milwaukee Metropolitan Sewerage District. It is funded by a grant from The Institute of Museum and Library Services. 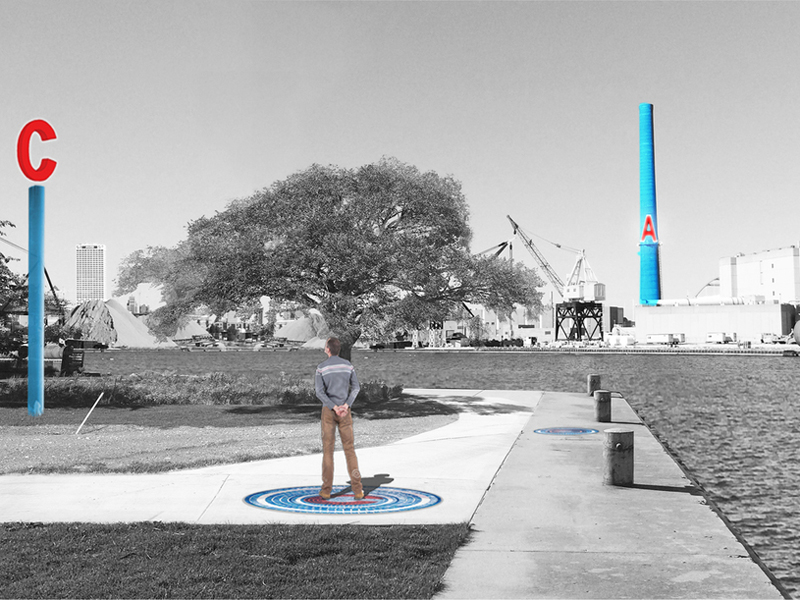 According to the project web site:

"M/CaLL ‘Watermarks’ is an initiative to develop an inclusive and urban-scaled vision for the city of Milwaukee, designed to help its citizens better understand their relationships to the water systems and infrastructure that support that support their lives. This is envisioned as a multi-layered framework that can be implemented over time.

"The project intention is to develop a dispersed series of projects, designed to engage citizens in varying capacities throughout the city, and in their own communities. Initial project interventions will be strategically embedded into the existing water fabric of the city, as catalysts to incrementally populate the city with further projects by other artists. Furthermore, a series of public programs, citywide initiatives and community events will be developed to further support the creation of a tangible, intimate understanding of and engagement with water.

"The overall objective will be to increase water IQ throughout the City of Milwaukee to help create a new public narrative around water where citizens recognize water as resource and responsibility, vital to life as well as general well-being across the region."