Retired Milwaukee firefighter Wayne Mutza knows a thing or two about firefighting and the equipment required for the job. In his latest book, he shares the history of American fireboats.

Retired Milwaukee firefighter Wayne Mutza knows a thing or two about firefighting and the equipment required for the job. Over the course of more than two dozen books, Mutza has shared that knowledge – as well as his passion for battle aircraft. 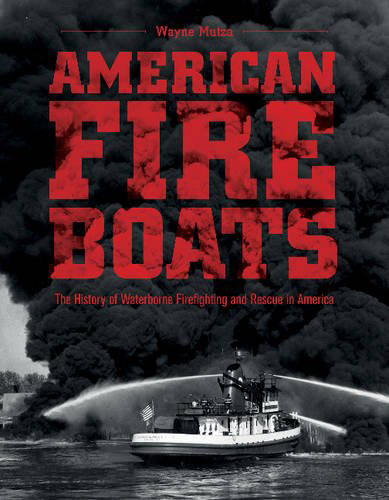 We asked Mutza about his books, about fireboats and about his new book (and his next one, too).

OnMilwaukee: You seem to be an endless book machine. How many have you written to date?

Wayne Mutza: And endless book machine. Yes, that’s me. Actually, I would like to have written more but I get involved in many other things. I’d need another lifetime to do all the books I planned years ago. I don’t track them so I had to count – I’ve done 28 books. And some time ago I wrote a good number of articles also.

As new as this one is, you already have another published since, don't you? Can you tell us about that one?

I did have another book in the works besides "American Fireboats." A publisher I’ve worked with asked that I do a book to kick off their new series. Although swamped with projects, I was honored and couldn’t turn them down. The book is "Bell 47/H-13 Sioux Helicopter" for Schiffer Publishing’s new "Legends of Warfare" series. The Bell 47 is most recognizable as the bubble-canopy chopper that opened each episode of the television series M*A*S*H.

How do you do your research for a book like "American Fireboats," especially considering how exhaustive and encyclopedic it is. It must be a lot of work?

I do "deep research" for any book subject; no stone unturned, and all that, very much like detective work. I’ve never considered it work since being on the research trail research expands knowledge and opens so many doors. It’s enjoyable, really.

How much time did you spend on this one?

People often ask how long it took to do a particular book. I don’t track the time I spend on them. Not a day passes that I don’t do something related to writing, be it research, or even penning a sentence or two. My memoir took only a few months; I went gangbusters on that one when the memory banks opened like flood gates. Others might be books "in-progress" for years.

I maintained a file on fireboats for years, and about two years before publication began the book in earnest, collecting material and making contacts to fill the areas I knew I needed to present a comprehensive volume. That is possible only with help of so many people and organizations across the country.

Tell us a bit about the rise – and fall, I guess – of the fireboat in America.

The use of fireboats goes farther back in history than most realize. Their early history is fascinating, especially for anyone interested in marine history, the steam era – which evolved into diesel power – and big, powerful vessels.

Fire departments in large American cities had all they could do to keep up with rapid growth of busy waterfronts, where the massive wooden structures of commerce stood shoulder-to-shoulder. And when they burned, which is often, there was no stopping conflagrations until portions of the city were lost.

Over time, lessons were learned, although slowly; industry moved inland, fire codes came into play, building materials became more fire resistive, and land water systems were improved. Technology and the economic burdens felt by large cities combined to produce fire-rescue vessels that were smaller and maneuverable, yet powerful and hi-tech enough to deal with most modern emergencies.

Sprawling marinas and the popularity of waterfront living makes life hazard a priority for marine fire-rescue.

They must've been pretty important in cities like Milwaukee, with multiple waterways. What's the quick history of Milwaukee fire boats?

Given Milwaukee’s proud history as "The Machine Shop of the World," with commerce flourishing along our three rivers by the mid-19th century, fireboats were deemed a necessity. Milwaukee’s first fireboat, the Cataract, began service in 1889, with four "big boats" answering more than 500 alarms annually during the early 1900s.

When the budget axe fell in one of its many swings, only two large fireboats protected Milwaukee waterways. The low-profile (to fit under downtown bridges), diesel-powered Deluge would go it alone until it too became a victim of the economy in 1984. Her replacement, along with a smaller 27-foot Chris-Craft, was a military surplus amphibian transformed into a fire-rescue boat.

Controversy aside, the amphib did the job until 1993 when it was replaced by the smaller, less powerful Phoenix.

What's the future of fire boats in Milwaukee?

With most of industry long gone from Milwaukee’s waterfront, marine protection today comes from the Canadian-built Trident, a 36-foot vessel usually seen at its berth near Discovery World. The lightweight, water-jet-powered, hi-tech vessel appears to be the future of Milwaukee’s fireboats, a far cry from the big boats that once plied Cream City waterways.

Are you working on any more fire department related books?

Yes, my main book project lately is an in-depth history of Milwaukee Fire Department apparatus, intended to be a fascinating, comprehensive volume covering the early days of buckets and hand-drawn fire apparatus to today’s diesel-powered behemoths, and all types of emergency vehicles and equipment in between. Rare photos, equipment from other Milwaukee County protective organizations, and first-hand accounts promise to flavor this volume.