3 Milwaukee spots that put the "craft" in craft cocktails

How to avoid this: You walk into a snazzy looking bar, order a fancy cocktail, and the better part of a $20 bill later, you realize you just drank 4 ounces of swill you probably could have gotten for $5 for at a college bar.

It happens:  You walk into a snazzy looking bar, take a seat at the bar and order a fancy-sounding drink off the "craft cocktail" menu. The bartender smiles and – quicker than a whip – delivers a rocks glass filled with an appealing looking concoction. You take a sip, and then another. The better part of a $20 bill later, you realize you just drank 4 ounces of swill you probably could have gotten for $5 for at a college bar.

But, it doesn’t have to be that way.

"People are so used to going places and getting shitty cocktails that they don’t even look at a cocktail menu anymore; They just jump to beer and wine." says Mike McDonald, president of the Milwaukee chapter of the U.S. Bartender’s Guild. "We’re fighting a battle to really win the hearts and minds of people – engaging them in the idea of what a craft cocktail really is."

And – as many have learned from experience – price is never a good indicator of quality.

"Milwaukee has always run on the expensive side for drinks," notes John Dye, owner of Bryant’s Cocktail Lounge. "The best way to tell if a bar is making a great cocktail is to taste it. Is it balanced? Are they using fresh ingredients? Is there care taken?  A bartender who grabs a glass by the rim is probably not making a great cocktail."

But what is a craft cocktail?

Once the ingredients are accounted for, the rest is contingent upon technique and, as Dye notes, care. Ideally, that technique incorporates a combination of education, a sense of history and a working knowledge of the chemistry that takes place when mixing soluble elements. And care includes cleanliness, the use of appropriate glassware and an all-around attention to detail. 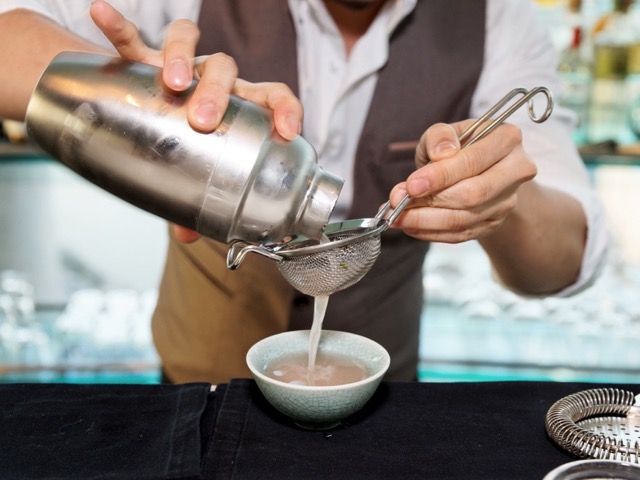 "People sometimes scoff about bartenders using a jigger, thinking we’re skimping," McDonald notes. "But, it’s as much about not using enough as it is using to much. The jigger provides assurance that guests get what they’ve paid for. In the end, everybody wins with jiggers."

Three spots to get your craft cocktail on

There are numerous places in Milwaukee making great craft cocktails – and the list is growing – and here are three for starters.

Goodkind
Katie Rose runs the bar at one of Bay View’s hottest restaurants – a spot that’s become known for its inventive craft cocktails.

"We sell more cocktails than beer and wine combined," she says. "And part of it has to do with the way we operate. We encourage people to take a moment and really look at the list of cocktails. We open up a conversation about ingredients, get to know the person and what they gravitate toward. Then it’s a matter of finding things that they’re likely to enjoy."

Rose has the advantage of working side-by-side with the Goodkind kitchen, where she has direct access to farmers and seasonal produce, which she uses to make a variety of house-made products – some of which are hits, and others misses.

She remembers her efforts to capture the magic of fresh sweet corn in a housemade soda. "It was delicious to start," she says. "But, maybe three days later, I went to open one and it just sort of oozed out like something out of Ghostbusters. So, I grabbed another one, and it did the same thing. Turns out that all the starch reacted to the process. We lost about five gallons of soda in that experiment."

On the other end of the spectrum, she just finished up a batch of rye whiskey took over a year to infuse with fresh peach flavor. In this case, time and patience were key.

"Once we got it to the point we wanted it, we experimented, using an immersion circulator to reproduce the infusion," she says. "We thought maybe we could save time on the next batch; but it just wasn’t as good. 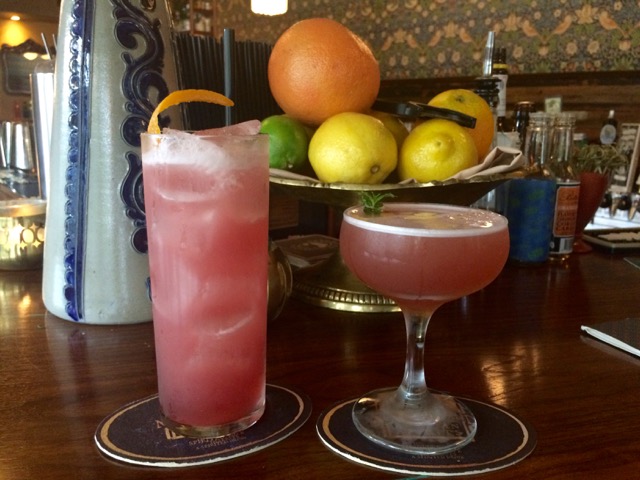 1. Light as a Feather
St. George Terroir gin, Hayman’s Sloe Gin, Dubonnet Blanc (a fortified wine), Spruce/mint syrup, lime, Pernod
It's for you if:  You usually opt for vodka over gin, but are looking to branch out with a cocktail that's balanced, bright and citrusy.

3. For You, 1976
Dickel Rye, Grand Poppy Bitter Liqueur, Rishi Tangerine Ginger tea syrup, grapefruit bitters
It’s for you if: If you like whiskey, but not looking for something that’s fruity, tangerine ginger complements bitter liqueur, keeping it from getting too bitter.

Spain is known for its gin bars, which showcase a wide variety of gin-based cocktails, serving them up in beautiful balloon shaped glasses. And MOVIDA follows suit, sporting 25 different gins behind the bar, including a Spanish gin, Mahon, which is a bit sweeter, mixing elements of both old and new school gin with plenty of lightness and citrus.

Rather than using pre-made selzer, bartenders at MOVIDA use a soda stream to carbonate the entire cocktail, bottling it in six-ounce portions. 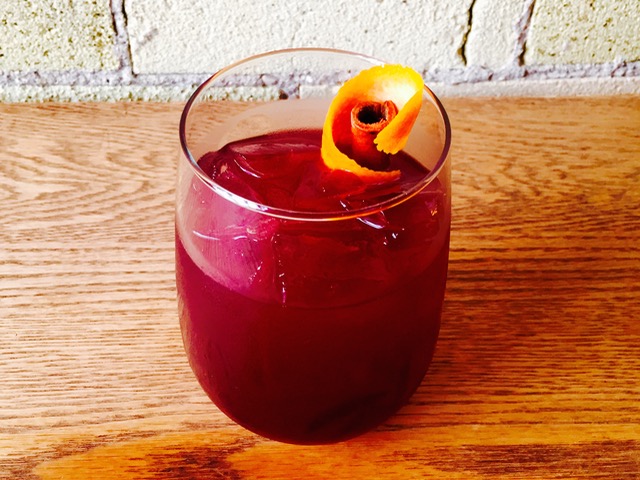 1. Something Borrowed Something Blue
Broker’s gin 95 proof London dry, fresh lemon, blueberry lavendar syrup, Jamaican #2 bitters, Spanish sparkling rose
It’s for you if:  You’re a fan of the French 75; you enjoy a bit of fruit and bubbles

2. From Here to There
Plantation 3 star rum, mango habanero syrup, fresh lime juice, Jamaican #2 bitters.  Served up with fresh mango.
It’s for you if: You like tropical drinks. It’s technically a riff on a Daiquiri, but not a thing like the blended drink you can get at Applebees

3. Sangria (pictured above)
Spanish Tempranillo, house made peach brown sugar syrup, Spanish brandy, Pierre Ferrand Dry Curacao and bittercube cherry bark bitters, fresh fruit juice
It’s for you if: You enjoy sangria, but want to try something a little bit outside of the usual box. Spanish sangria is redolent with vanilla and spices, so it's almost like a mulled wine served on the rocks.

Bryant's Cocktail Lounge
If there’s a classic "craft" cocktail bar in town, Bryant’s is it. Founded in 1938, Bryants was founded in 1938, the bar harbors over 450 recipes for both traditional and modern cocktails, with more being added all the time.

"I don’t think that in the 1920s they called them craft cocktails," remarks owner John Dye. "I always avoid using that word here, because we’re not a modern throw-back. We really try to be true to what Bryant’s has been for over 70 years. The drinks have evolved over the years, but they’ve always been true to the idea of cocktails created with care."

If you walk into Bryant’s on a given evening, you’re likely to find imbibing of all sorts, from straight up old school drinks like the Manhattan, to ice cream drinks and hurricanes.

Overall, the Bryant’s philosophy is simple: "We try to avoid cocktails with a million ingredients," summarizes Dye. "It’s simply not necessary. In fact, some of the best drinks have just three ingredients." 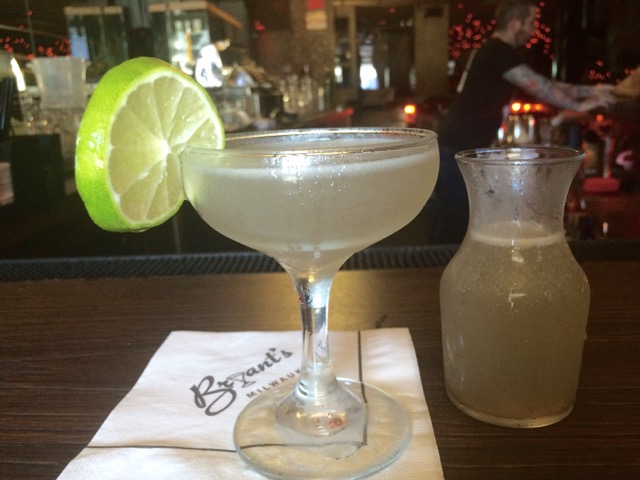 1. Over the Rainbow (pictured above)
Journeyman bilsbury gin, Mathilde peche, parfait amor, bittercube Jamaican #1, lime juice, mint garnish
It's for you if: You're already a gin fan. This drink could also be a good entry-level cocktail for someone who's trying to develop a taste for the complex spirit.

2. Pina Colada
Rum, coconut and pineapple
It's for you if: You're craving a tropical treat that's refreshing and smooth. Bryant's special high powered blender ensures it's one of the smoothest in town.

3. Manhattan
Your choice of brandy, whiskey or rye with vermouth, bitters and a cherry (you can order it sweet, dry or perfect, with elements of both) Always stirred, just as they have been for 50-plus years.
It’s for you if:  You want an alcohol-forward tipple with a bit of history.