Yesterday, a friend shared a 1955 photograph with me on Facebook. In the small, square monochrome image, a group of men lean against a gorgeous Art Deco bar, alongside a couple of uniformed police officers. But they're not drinking. They're investigating a murder.

Recently, a friend shared a photograph with me on Facebook. In the small, square monochrome image, a group of men – mostly in hats – leans against a gorgeous Art Deco bar, alongside a couple of uniformed police officers.

But they’re not drinking. Heads down, they’re taking notes. The clock above the small, round mirror mounted in the back bar reads 11:25. A coat rack on the wainscoted wall appears empty, as does the rest of the bar, which looks neat, clean and orderly.

That is, except for the chalk outline of a body and the cross-shaped pool of blood on the floor.

Christine Erdmann shared this startling image from the 1950s, which she’d found on the "American Saloons, Bars & Taverns" Facebook page, where it had been posted by John A. Harris (the photo appears to come from the Wisconsin Historical Society website) with this caption:

"Chalk lines in the foreground mark the spot where the owner of the ‘White Elephant Bar’ in Milwaukee, Wisconsin was shot and killed on May 11, 1955. Police and detectives are at the bar investigating the ‘facts.’ The killer was eventually captured and confessed to the crime."

The blood on the floor was that of 45-year-old Carl Fisher, who was the tavern keeper at the White Elephant, 5000 N. 35th St., on the corner of West Cameron Avenue, up near North Milwaukee.

"For a thrill, (Riege) held up a northwest side tavern Tuesday night and shot and killed the tavern keeper," the Journal reported the following day. "The shooting was done in sight of the victim’s wife and their 19-year-old son. Captured three hours later, the killer, in the mistaken belief that the wife and son had given information that led to his arrest, expressed regret that he had not killed them, too."

After being shot, Fischer lay on the floor of his tavern moaning. Riege, saying he "wanted to put him out of his misery," shot Fischer multiple times.

Walking out, Riege went to his job as an assistant press operator at Milprint on Holton Avenue, where he was arrested three hours after the shooting.

"Riege Wednesday told authorities he wanted to plead guilty and have a speedy trial, and they moved to accommodate him," the paper reported.

Meanwhile, according to the Journal, Riege’s mother said, "He’s never done anything wrong before, never ... to kill an innocent man that way ... I just can’t understand it ... why would a good boy do that sort of thing?"

In September, when her son pleaded not guilty by reason of temporary insanity, she’d note that two of her brothers were hospitalized for mental illness.

At the trial, Fischer’s widow, Evelyn, testified that Riege, dressed in a black leather jacket and a black cap, entered the tavern – empty except for the the Fischers and their son, Robert – and ordered a beer.

"Suddenly, he reached down to his right side ... and took out a gun from his jacket," the paper reported. "He fired toward me without any warning."

Riege said that just before he pulled out the gun, Mr. Fischer had asked him if he knew the score of the ballgame. "All of a sudden I had the gun out. Mrs. Fischer said, ‘You’re kidding.' I said, ‘No, I’m not.’ I had the hammer back and fired."

Mr. Fischer got off his stool at the other end of the bar and approached Riege, who shot him in the abdomen. Riege then demanded money from Mrs. Fischer. Robert Fischer fled for cover. 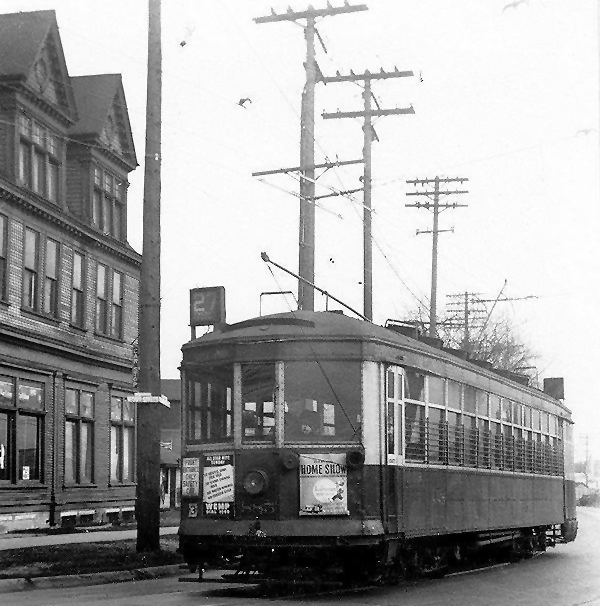 An exterior view of the White Elephant, at left, in an image courtesy of Don Ross
and Thomas Manz/Facebook.

"Mrs. Fischer said she walked into a hallway leading to the kitchen," the Journal noted. "Unable to close the door, she watched through it as the robber started toward the front door. He took a few steps, she said, whirled and fired three more times at Fischer, lying on the floor."

In his own defense, Riege testified that he "was pretty well excited and worked up. I was all mixed up. I didn’t know what to do. Everything happened so fast ... and the noise of the gun ... and that made me excited."

Asked if, when he’d arrived at work, he was sorry about having committed the murder, Riege replied, "I didn’t give it a thought."

When asked why he was at the tavern, Riege said he was on his way to work and, in a stunningly poor choice of words, added "because I had a few minutes to kill."

Riege had visited Mrs. Margaret Wendorf’s tap, at 5717 W. Villard Ave., a couple hours before the shooting, and Wendorf testified that he seemed agitated, as if bothered by something.

The three "alienists" charged with determining Riege’s mental state all agreed that he was sane.

Despite his uncles’ woes and the fact that he’d suffered a head injury when he crashed his car at 28th and Mount Vernon two years earlier – a fact that figured into the temporary insanity defense – Riege was found guilty of first-degree murder and sentenced to life. Another guilty verdict on a robbery charge added an extra three to 30 years.

His attorney, Brooke Tibbs, likely didn’t help Riege's cause when, in his closing argument, he said, "this offense cannot be excused. I wouldn’t permit this man to go free – he did a horrible thing – it shocks me every time I hear it."

In 1960, when Gov. Gaylord Nelson was granting clemency in a number of cases, Riege’s request was denied.

Riege was paroled in 1970 – something that appears to have gone unnoticed by the press at the time – and left Wisconsin.

The building that housed the White Elephant is gone, replaced by a parking lot.

Carl Fischer is still dead, lost forever to his family for $17.