﻿Before natural gas - before electricity - there was manufactured gas, also known as coal gas. Here's a look at a Milwaukee facility that gasified coal; it's now home to City Lights Brewing and other businesses.

The group – headquartered at Milwaukee Public Library, which I featured in this story a few years back – is very active in terms of collecting and archiving documents and photos and objects and also hosts numerous events each year.

Here is today's story from the Wisconsin Marine Historical Society: 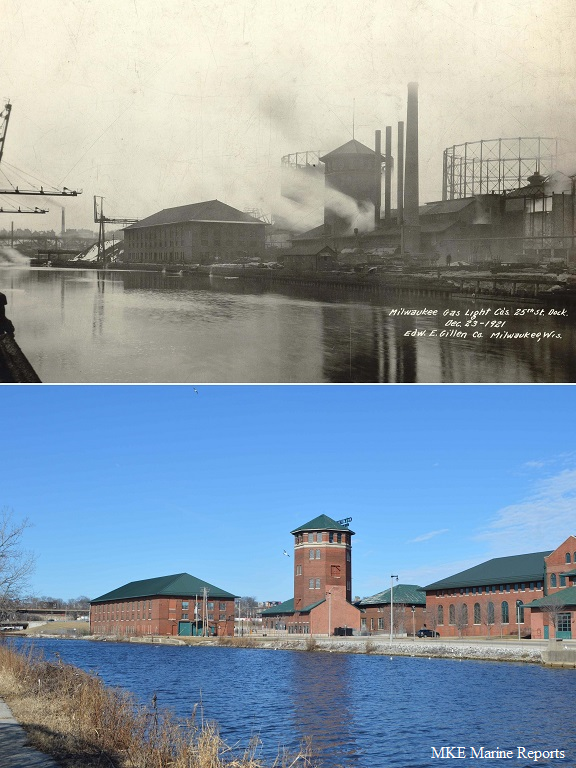 Before natural gas – before electricity – there was manufactured gas. Also known as coal gas, it is produced by cooking coal at high temperatures in the absence of air. This produces a flammable gas, which can be stored and distributed. Coal gas was first used in England around 1785.

Eager to keep pace with its upstart neighbor to the south, Milwaukee sought to light its streets with gas starting in 1849. The Milwaukee Gas Light Company was organized in early 1852, and on Nov. 23 of that year the city lit streetlights for the first time.

Gas consumption grew steadily. Milwaukeeans were soon using this "clean" fuel for lighting, cooking and heating. To keep up with demand, Milwaukee Gas Light built a large facility near 25th Street. Known as the West Side Works, it began producing gas in 1903. Coal boats traveled up the Menomonee River to almost 25th Street to feed the gas works on the north bank and supply coal docks on the south bank.

(You can read an Urban Spelunking article about part of the complex just before City Lights began its buildout and see interior photos from that time by clicking here.)

Electric light would not gain widespread acceptance until it lit the Columbian Exposition at Chicago in 1893. Natural gas did not reach Milwaukee until a pipeline from Oklahoma was completed in 1949.

Alexander Eschweiler, a prominent local architect, designed structures at the west side complex.

It was difficult to miss the facility’s four huge inflatable tanks (gasometers). These stored gas and used gravity to pressurize the distribution system.

North Point lighthouse became the first to be lit by gas in 1913.