Thanks to Milwaukeean Karl Bandow, who found a treasure trove of old Kodachrome half-frame slides of the city in an antiques store, we can offer up these gorgeous color (!) photos of the city as it appeared in the 1940s.

Though color photography dates back to the 19th century, it wasn't until the introduction of more affordable Kodachrome film in 1935 that amateur photographers could begin to use the new technology. Even still, it took time to catch on and, therefore, color photos from the 1940s aren't something you see every day.

Thanks to Milwaukeean Karl Bandow, who found a treasure trove of old Kodachrome half-frame slides of the city taken by Ray Szopieray in an antiques store, we can offer up these gorgeous color photos of the city as it appeared in the 1940s. 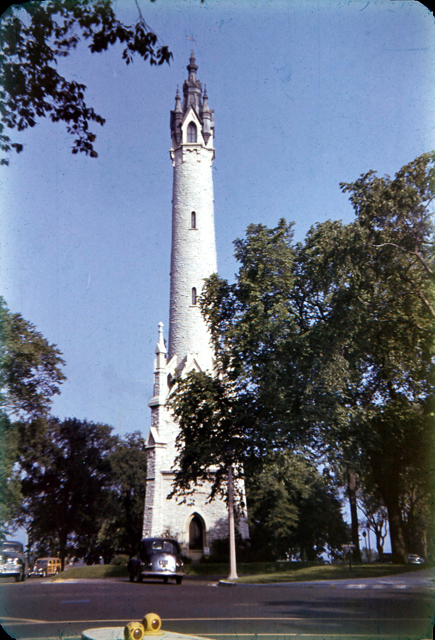 You know the deal here. This lovely spire – which dresses up little more than a pipe to help regular water pressure, with a spiral staircase around it – was designed by Charles Gombert and erected in 1871. It looks more or less exactly the same now, and if it weren't for the cars and those old low-to-the-ground traffic signals, one could be convinced this photo was taken yesterday. 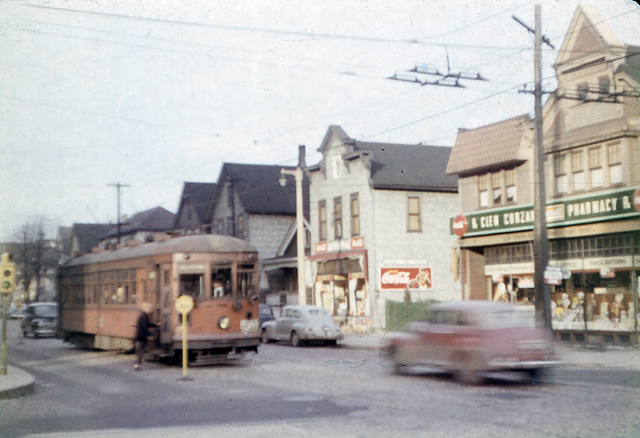 Clem Chrzan was born in Milwaukee in 1903. He ran his pharmacy – which has that classic drug store Coca-Cola sign in this shot – on the northeast corner of 5th and Mitchell Streets. The building likely fell to freeway construction. If the photographer had turned slightly to the left, you'd see St. Stanislaus Church on that corner. Chrzan and his family lived above the store. 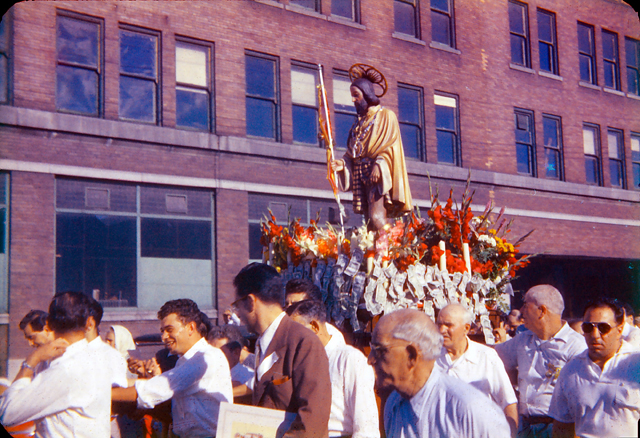 Before Festa Italiana set up shop in its permanent lakefront home in 1978, Milwaukee's Italian community did like similar enclaves around the country and, in fact, around the world, wherever Italians immigrated: they held street festivals with a procession. Go to Festa this weekend and you'll see a procession on Sunday morning much like this one, which was likely on the streets of the Third Ward, which in the '40s was still a heavily residential neighborhood. Urban "renewal" in the '50s would change that. 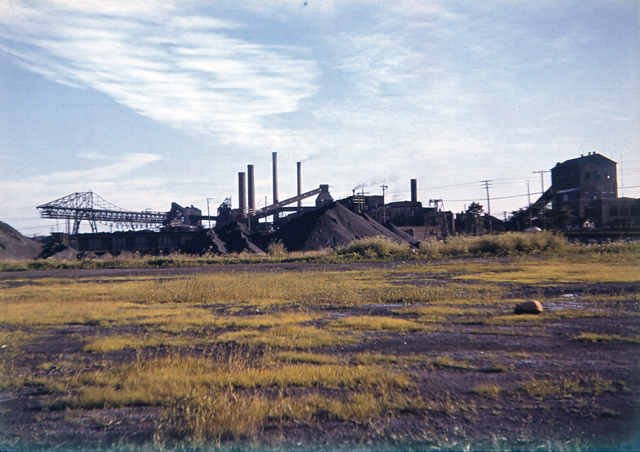 I believe this is the former Solvay Coke plant at the foot of Greenfield Avenue, the final remnants of which were just recently removed. The plant converted coal into coke, a fuel for foundries, by heating up the coal in a vacuum. We Energies is currently cleaning up the site so that it can be redeveloped. 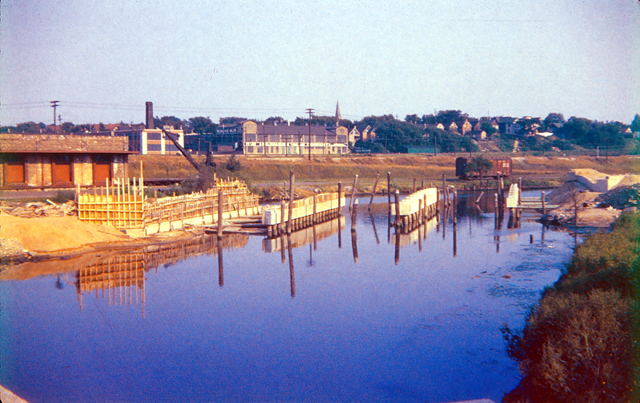 Though Milwaukee Valve Company is now headquartered in New Berlin, the business – founded in 1901 – has roots on the western fringe of Bay View. Its former site on the 2300 block of South Burrell Street is seen here from across the Kinnickinnic River. 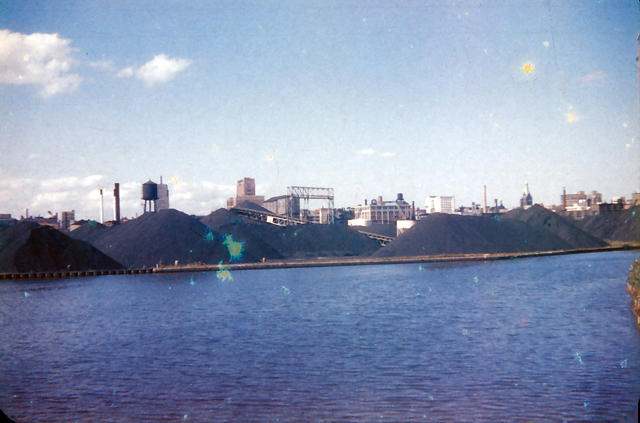 In the foreground we can see piles of coal, and its juxtaposition with the Downtown skyline in the background reminds us of the city's industrial heritage. In fact, this appears to be near the site of Valley Power Plant, which until its recent conversion to natural gas, had similar piles of coal. 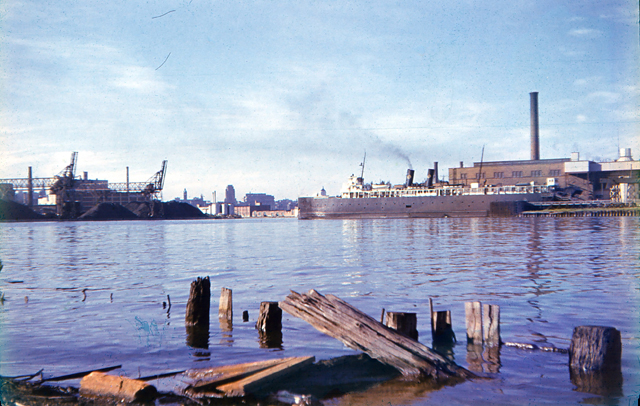 Best I can tell – and I trust you'll drop me a line if you have better info – this is taken a bit further southeast of the photo above (see the coal piles at left), on the south bank of the Menomonee River, about where it splits. But the part of Downtown you can see best is the far east end of Wisconsin Avenue – the Wisconsin Gas, Northwestern Mutual and Cudahy Tower buildings – so it's possible that Ray was perched somewhere a little farther east, too. (UPDATE: A couple folks have written in to say that this is likely taken around the foot of Greenfield Avenue, with the Jones Island smokestack visible in the center. LandmarkHunter.com's J.R. Manning pointed out that the ferry smokestacks appear to bear the logo of the S.S. City of Milwaukee.)

Stratton Grain President Harry Stratton – who was the nephew of the founder – is best remembered for his other business: the one he started in 1910 with Stephen F. Briggs. Though he long served as president of Stratton Grain, Stratton was also chair of Briggs & Stratton. This grain elevator still stands on Bay Street, near Barnacle Buds. But these days "Nidera" is painted on the side. 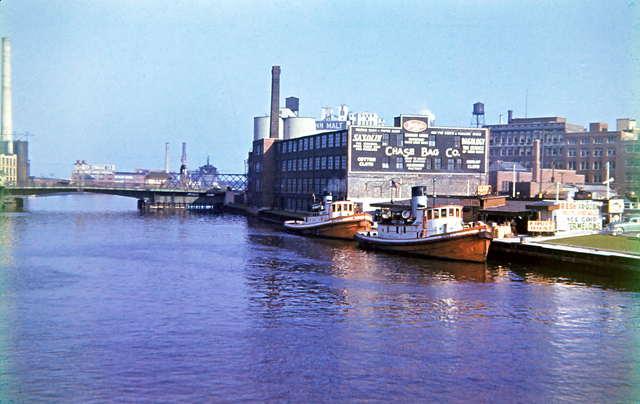 OK, so there are two photos here, but since they're of the same spot – albeit from different angles – I'm calling it a two-fer. This is the Milwaukee River, from Water Street, looking east. You can see a couple tugs and the near-legendary Fruit Boat. In the bottom one you can see current MIAD buildings. In the top one you can see the old railroad swing bridge in the distance. 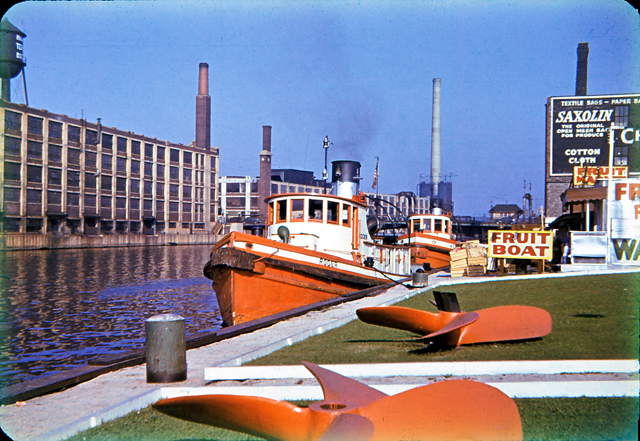 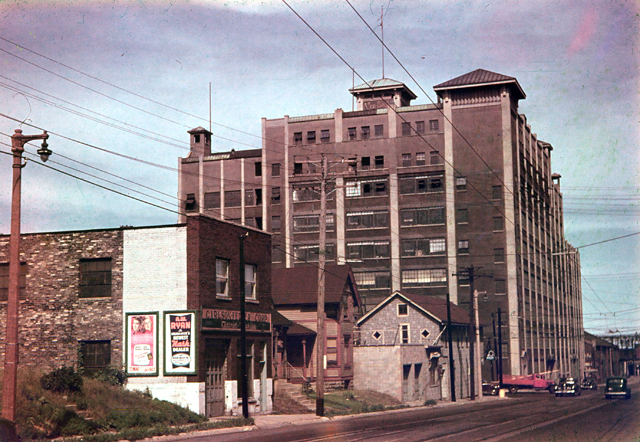