In this series, we ask chefs around the city to describe their restaurants in their own words and recommend three dishes that embody the best of what they offer. In this edition, we talk with hef Nicolas Ramos and Citlali Mendieta-Ramos of Antigua in West Allis.

What's in a restaurant? In this series, we ask chefs around the city to describe their restaurants in their own words and recommend three dishes that embody the best of what they offer. In this edition, we talk with Chef Nicolas Ramos and Citlali Mendieta-Ramos of Antigua in West Allis.

"We first opened a restaurant so that we could work together," says Chef Nicolas Ramos. "Now it’s been 10 years, and as we look back, we can see how things have evolved. When we first opened Downtown, we were a Latin cafe and we served breakfast and lunch. Our goal from the beginning was to showcase Mexican food that went beyond tacos. At the time, Latin food wasn’t as familiar as it is today."

"We were open for just nine months before we found out we needed to relocate," explains co-owner Citlali Mendieta-Ramos. "When we moved to our location in West Allis, we knew we wanted to change the name to communicate the expansion of the concept. So, we called ourselves Antigua Mexican and Latin Restaurant. Recently, we rebranded and change the name to Antigua Latin Inspired Kitchen to reflect the scope of the food we’re serving. It’s a lot easier now because people are more familiar and interested in food from around the world."

"Over the years we really began exploring and learning about other cultures," she notes. "We’ve learned firsthand from so many different people. For example, we learned how to make empanadas from Yolanda Constantini, a native of Argentina whose son owns La Lune in Riverwest."

"When someone walks through the door at Antigua, we want them to have a good time," says Ramos. "And that’s where all of my effort goes. People come here on dates and with family; they create memories here. And we want that experience to be unique from beginning to end. I also really want to give people exposure to something new and help them to learn more about other countries. We don’t serve many of the traditional tacos or burritos. It’s not that we don’t love them; but, there are so many more things that we can create."

"As a chef, it’s really been about evolving. For the first 10 years, we’ve expanded our menu to include more Latin inspired dishes. And now, for the next 10 years, we’ll be focusing on putting our own twists on traditional dishes, really making them our own."

"This dish moves away from the traditional steak or al pastor taco," notes Ramos. "We’ve always wanted to showcase something a little bit different – a step ahead, something new. I’m from central Mexico, where they use a lot of corn tortillas. But, I went with a flour tortilla for this dish, which are traditional in the Northern part of Mexico. The dish is delicious for everyone. But, we’re also getting more and more vegetarian customers who eat here. So, this dish really caters to them." 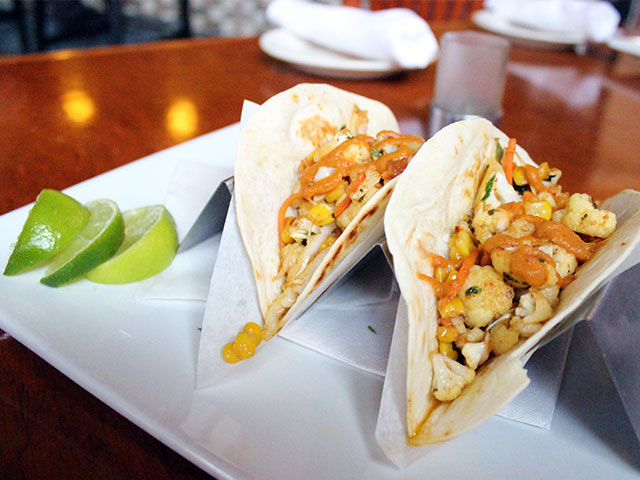 "This is close to my heart because it’s one of the first recipes I learned to make," notes Mendieta-Ramos. "I learned from my grandmother, and it’s a very tedious dish. You peel the walnuts and the pepper. But, the way the flavors come together – the pork and the fruits with the cinnamon and nutmeg – it really creates a beautiful dish. The sauce is made from fresco cheese with walnuts, nutmeg and sour cream. It’s a cheese I grew up eating, and it’s so delicious. The pomegranate seeds give it a bit of pop and texture. It’s served with our cilantro rice, which is one of our staples." 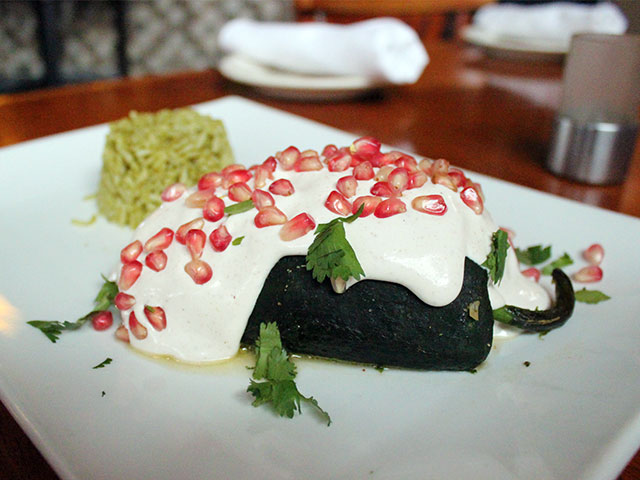 "For this dish, I was thinking… I’ve been in this city for almost 20 years," says Ramos. "It’s now the place I call home. How can I put that on a plate that reflects both my background and the place where I live? I went with a very traditional mole sauce from Central Mexico. For the filling, we’re using cheese curds, which are a staple here in Wisconsin. And then, the way we’re folding the tortillas -- which is different from most enchiladas -- reflects a technique they use on the Gulf Coast of Mexico." 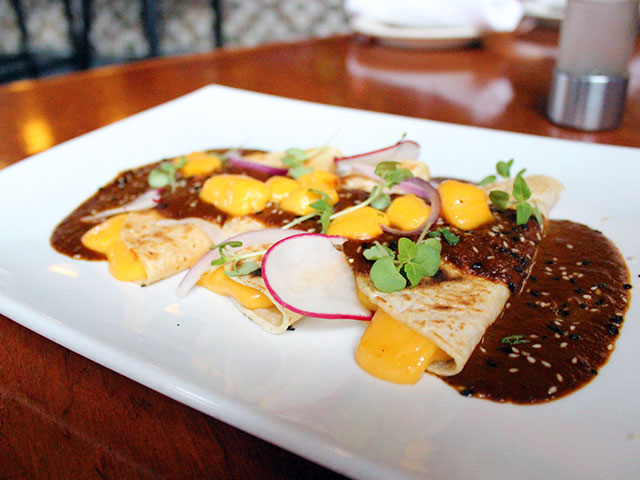