What's in a restaurant? In this series, we ask chefs around the city to describe their restaurants in their own words and recommend three dishes that embody the best of what they offer. In this edition, we talk with MOVIDA Chef de Cuisine Thomas Hulman and Stand Eat Drink Culinary Director Jeff Badders.

What's in a restaurant? In this series, we ask chefs around the city to describe their restaurants in their own words and recommend three dishes that embody the best of what they offer. In this edition, we talk with MOVIDA Chef de Cuisine Thomas Hulman and Stand Eat Drink Culinary Director Jeff Badders.


"When we first opened, MOVIDA had a fairly small menu, maybe 20 items or so," says Jeff Badders, culinary director for Stand Eat Drink Hospitality. "And everything was tapas style. Over the years, we really expanded the menu, and some items moved away from the more traditional Spanish cuisine. So, in celebration of our 4th anniversary, what we’re trying to get back to is authenticity."

"We’re revisiting really classic Spanish items with a modern sensibility and eye for quality," he adds. "Tommy [Hulman] and Sous Chef Roberto [Alveraz] have really taken the lead on that. They’ve done a lot of research and development, creating flavors that really contrast, but that also shine when they’re together."

Hulman nods. "We really looked at the menu from a community standpoint," he says. "So it was about looking at things that people missed – like the empanadillas – and then coming up with ways to really elevate them in terms of how they taste. So, we took the time with each one and really worked so we could hit the exact flavor profiles we were looking for."

Hulman says the goal is to create dishes that are a true match for MOVIDA’s convivial atmosphere.

"The way I see it, we’re this nice little casual place where you can experience a higher level of dining," he says. "But it’s tapas, so it’s also about coming in with friends, having great conversation and pairing that with really good food. You can spend a couple of hours and a little bit of money and be really, really happy." 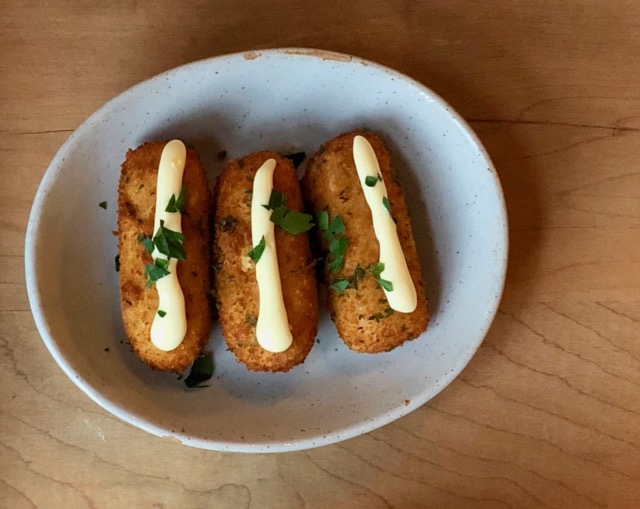 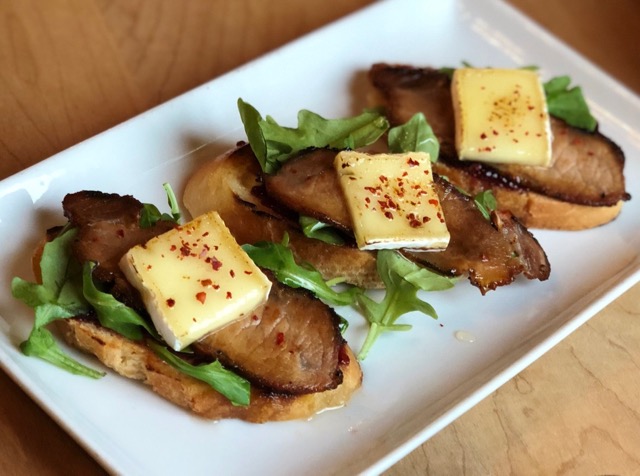 "This dish is really simple, but we wanted a really balanced flavor profile," notes Holman. "The bread is grilled, so it’s nice and crispy. We add raspberry rose jam for sweetness, and we rub the pork loin with a nice paprika-forward rub that gives it a smoky barbecue-like flavor. We intentionally slice it a bit thicker so that it has a good presence, but it’s still easy to bite into. As you’re eating, you get sweetness from the jam, a little spiciness from the arugula and the smokiness of the paprika; it all comes together beautifully."

"The meat is really the highlight of the dish," adds Badders. "It’s imported Black Foot, an Iberian pig which we import; and thanks to the breed, the treatment of the pig and its diet, the quality is just unsurpassed." 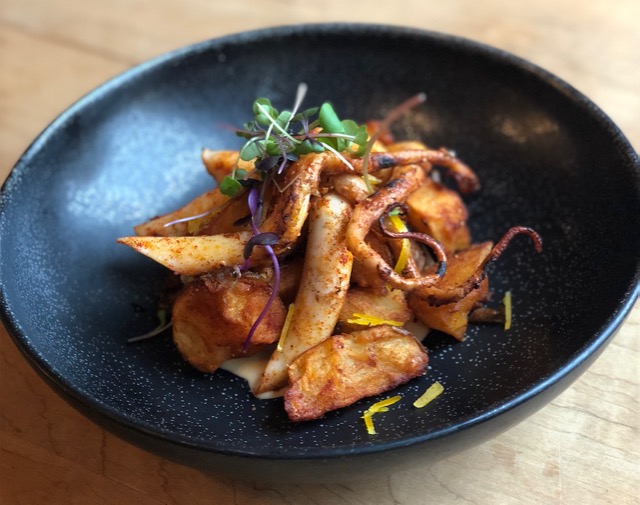 "Octopus hasn’t been on the menu for quite a long time, so we really wanted to reintroduce it," says Badders. "To create a great dish, we decided on the flavor profile we wanted, and then they broke down the components and focused on each one, making sure that it brought its best to the table."

"This is a really rustic dish," explains Hulman. "We par-cook the potatoes and hand tear them before we deep fry them so they nice rough edges that get really crisp when we fry them. The Octopus is traditional, braised with paprika and then grilled... so you get the nice char on the exterior. And then you brighten things back up with the citrus flavors in the aioli. It’s good. It’s traditional. When I’m sitting down and eating this, it’s really a moment where I take a bite, and I know this is some of the best we’re putting out there." 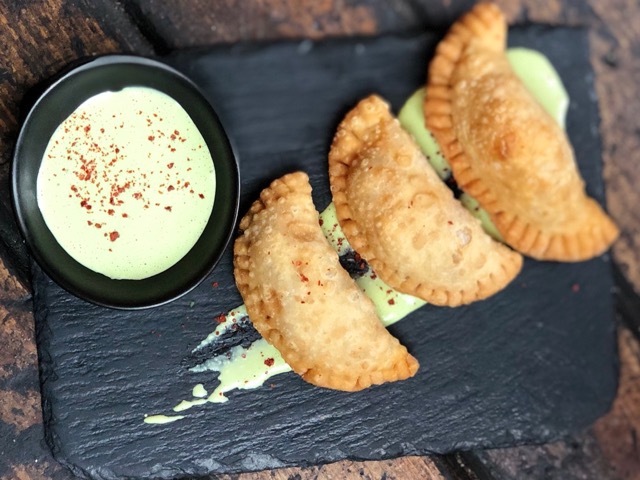 "Guests have been telling us for a while that they wanted the empanaditas back," says Badders. In the past, we’ve made them with pork, but we’ve incorporated pork in a number of places. So – as essential as pork is to Spanish cooking – we looked for a protein that would bring some diversity to the table. The brilliance of this dish is the way the flavors come through. First you get the jalapeno from the chicken, and then you get the flavor – in a new way – from the mojo verde."

"When you eat it you’re really getting the flavors of our paella in each little bite. We’re serving it with the mojo verde – you’ve got spiciness from the jalapeno peppers that’s tempered by sour cream. It’s bright and vibrant and it really shows what MOVIDA is – it’s simple, but there’s a lot of care, and that means the flavors really pop."