What's in a restaurant? In this series, we ask chefs around the city to describe their restaurants in their own words and recommend three dishes that embody the best of what they offer. In this edition, we talk with Klayton Mutchler of ABV Social, Cafe Grace and Taqueria El Jefe.

What's in a restaurant? In this series, we ask chefs around the city to describe their restaurants in their own words and recommend three dishes that embody the best of what they offer. In this edition, we talk with Klayton Mutchler of the Phoenix Hospitality restaurants: ABV Social, Cafe Grace and Taqueria El Jefe.

"With all three concepts we’re really trying to offer something truly unique," notes Chef Klayton Mutchler, who heads up the kitchen for three restaurants: ABV Social, Cafe Grace and El Jefe. "And all of our restaurants are influenced by global flavors."

"We're not just strictly French at Cafe Grace. We’re serving some truly classic French dishes. But the French settled in so many places around the world – Vietnam, Morocco, Montreal and Quebec – so we’re also taking advantage of various techniques and ingredients that might not be traditional in France."

"At El Jefe, we offer everything from classic, traditional items like barbacoa and al pastor cooked on a spit. But we also have not-so-traditional offerings like the Karate Kid with pork belly that's been confited in pork fat, pressed, sliced, glazed with teriyaki sauce and served with green apple jicama slaw. We also have weekly specials, so there’s always something new to try. And every Friday we feature a fish fry taco."

"Meanwhile, at ABV Social, our goal is to give people really elevated bar food. We take the structure of well executed European style cuisine and we apply that to dishes that are casual and comforting. You can get great fresh cut wings with Chinese takeout sauce or a heart attack burger with creamy peppercorn sauce made with bourbon. But you can also get a super fresh salad, including a cold lo mein salad with cucumbers and scallions and peppers. Moving forward, we’re working on a Korean bulgogi eggroll. It’s a bit like a Philly cheesesteak egg roll with Korean barbequed beef."

""My hope is that people will come to our restaurants and follow their instinctual cravings – maybe it’s tacos, maybe it’s a beer or a croque madame – but then, I hope that they will give all three restaurants a try. In each of the restaurants, we want to give customers a great experience so that they're blown away by what they’ve found in this unexpected location." 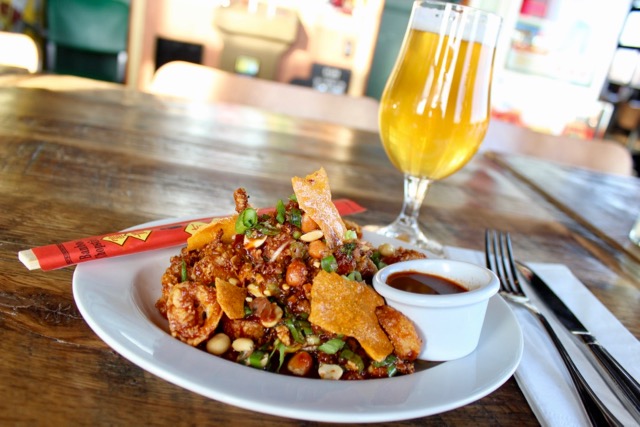 "We do things here that are both approachable and fun, so I’ve been playing with the idea of kung pao for a while. I didn’t want to do standard kung pao chicken with white rice. You'll see kung pao chicken wings here and there, but I’ve never seen a kung pao calimari. And I've always wanted to put calamari on the menu, so this was kind of a no-brainer. You’ve got this really crispy calamari with a great sauce, peanuts and crispy rice chips. It’s sweet. It’s salty. And it’s just so good with a beer … and ABV has so many good beers."

2. Two tacos and a side from El Jefe 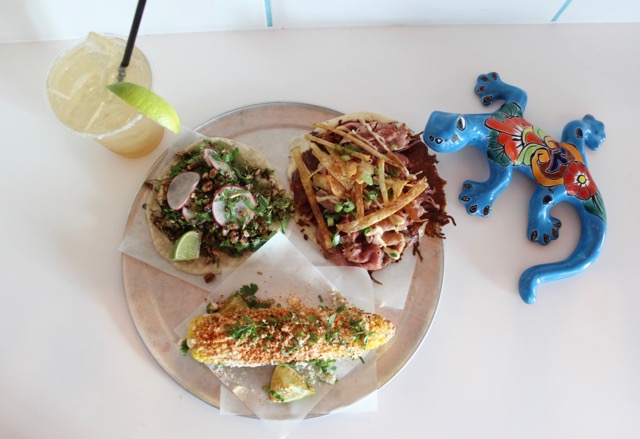 "The elote is just super traditional sweet corn. We didn’t do anything outside of the box for that; but we introduced it as part of our day of the dead specials and people loved it, so we kept it on the menu. It’s the traditional mayonnaise, queso fresco, lime tajine seasoning and cilantro. It’s just delicious."

"The idea for the Mean Green came out of the necessity for a solid vegetarian option. Our goal was to make it vegetarian, but not necessarily healthy. It’s fried Brussels sprouts tossed in a traditional sauce made with bread, sesame seeds, chile de arbol and cider vinegar. Then you have the freshness of the radish and the guacamole. My wife comes here a lot, and she always goes to El Jefe and orders this taco."

"When we came up with the Senor Croque, I was also involved with designing the Cafe Grace menu, so I looked up "ham and cheese taco." This taco was invented by the Europeans who settled in various places in Mexico. And it's a lot like a croque madame. You take cheese and put it on the griddle until it melts and crisps. Then you top it with the tortilla and add the ham and mustard. It’s actually really popular in Mexico. Kids eat it at home as a snack after school, and people eat it late at night from taco trucks." 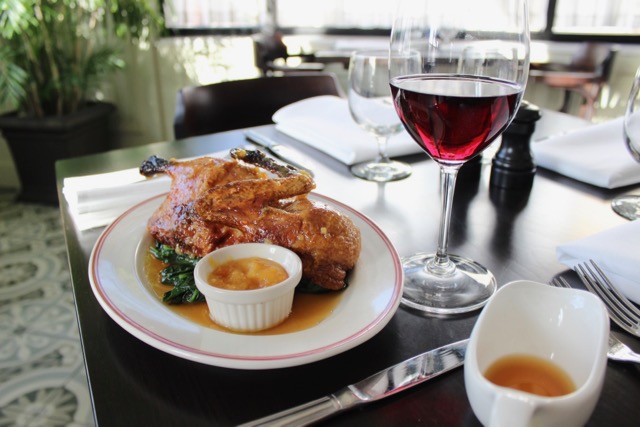 "When I created this dish, the goal was to make great use of the rotisserie to make the best duck ever. For this we actually start with a really traditional Chinese technique for preparing duck and we finish with a really French sauce. It’s a multiple day process that starts with injecting air into the duck to separate the skin from the flesh; that allows the duck fat to render effectively. Then we ladle boiling water and rice wine over the duck to tighten up the skin. From there, it goes into a cooler, where it dries out further for four days before we oil, salt it and put it on the rotisserie for about 45 minutes. During the last five or ten minutes, we brush it with house marmalade, which caramelizes on the skin."

"This is the sort of process that really gets me going as a chef. It’s about taking something so simple and putting a lot of love into it. This duck takes five days to make. It looks simple, but it tastes amazing. It’s the same with the accompanying orange duck consomme; we make and clarify it over the course of about three days."