Milwaukeeans love our 414, the area code covering the city, the county and parts of Muskego and Brookfield. But why did they pick 414?

Milwaukeeans love our 414, the area code covering the city, the county and parts of Muskego and Brookfield, and it’s been around forever.

Actually, forever only extends back to 1947, when Bell Telephone established our iconic area code, along with 715, in Wisconsin. The goal back then was to standardize long-distance calls and to remove the switchboard operator from having to manually connect people across systems with patch cords.

The exact answer isn’t totally clear, but we have some clues.

AT&T designed the North American Numbering Plan (NANP) for the Bell System in the 1940s. Originally, it consisted of 86 Numbering Plan Area Codes, and they had to follow certain rules.

States with multiple area codes had a "1" in the middle of their three-digit codes. States with one area code were assigned a "0" in the middle. Additionally, for the first digit, "0" and "1" were restricted, since those implied operator-assisted or international calls. The second and third digit could not be the same, since those codes were reserved for special purposes, like "411" and "911." Finally, the last digit couldn’t be a "0," because those were for "typewriter exchanges," an early form of text messaging.

So that explains the second digit in 414, and rules out certain numbers for the first and the third. The two fours, though, are more arbitrary.

Let’s look at the eight other area codes with a "1" in the middle, and the same first and third digit, for some hints:

At first, I thought that the largest metro areas would get the easy-to-remember area codes, but that’s not exactly right. Los Angeles, for example, got 213, and Chicago got 312. Additionally, these aren’t assigned like the interstate system, in which the number signifies the highway’s direction and placement in the country (but that’s another article).

I then surmised that the original planners tried to pick area codes for nearby cities that were really different, like 414 and 715 in Wisconsin, or 412, 215 and 717 for Pennsylvania. Remember that old rotary dial photos were not the easiest devices to use accurately.

While AT&T devised the area code system, it’s now overseen by the FCC, but handled by a dozen people at Neustar, Inc., a spin-off of Lockheed Martin. But Neustar doesn't know the significance of the fours, either.

Turns out, Milwaukee's area code has something to do with the number of clicks on a rotary phone. Fewer clicks were easier to dial.

John Manning, the Senior Director of the NANPA, told me that choosing fours were probably about the shorter clicks that Milwaukee earned by being a larger city. "Only 160 area codes (were) available," he said. "As such, the quantity of NPAs to select from was not that large. It had to do with the large call volumes going to the large cities, and the call setup time reflected in the 'register holding time.'"

Indeed, the biggest cities got the easiest to dial area codes: 212 (New York), 213 (Los Angeles) and 313 (Detroit). Anchorage got the hardest to dial (907), which required 26 clicks. New Jersey, Washington, D.C., Maryland, and Connecticut got 201, 202, 301 and 203. There were some odd exceptions, though: Dallas, western Massachusetts, and Manitoba were all promoted above their importance in 1947, while Boston, Kansas City (both Kansas and Missouri), and the suburbs of New York City were demoted.

Of course, the next three digits in phone numbers are a little easier to trace back, because they sometimes spelled out telephone exchange names or central office names (think "PEnnsylvania 6-5000"). But that just doesn’t jibe with the area code mystery.

"It's not terribly scientific," said Doug Hescox, a California code administrator, who talked about this to the Baltimore Sun in 1997. "There's a pool of numbers we can choose from, and we're getting down to where there's no nice, neat numbers left."

So that’s that. The fours are mostly arbitrary. 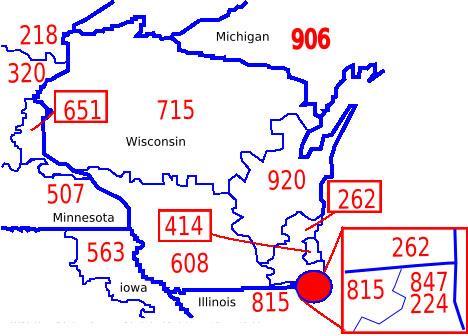 There certainly was cultural significance to area codes back in the day. Brian Bergstein of the MIT Technology Review told The Atlantic in 2014: "Of course we didn’t know it at the time, but now it seems that the atomization of area codes was a prelude to the microtargeting that fuels political campaigns and advertising: it refined our perceptions of who people are."

Does it matter anymore?

In 2017, it doesn’t really matter too much. Most of us don't memorize phone numbers, thanks to cell phone address books and speed dial. Because of number portability and the effective end to long-distance tolls, your neighbor may own a number with a completely different area code.

However, Verizon Wireless' Steve Van Dinter told me, "It’s really more for attaching a bit of geography to a phone number. While most people that grew up using cell phones tend not to memorize phone numbers, there are still plenty of people that identify an area code or exchange with a certain geographic area. And some choose not to pick up phone calls from people with area codes they do not recognize."

In other words, 414 may be a source of pride, but someone with one of the other 293 American area codes may be a Milwaukeean, too. At least until 2038, when some have speculated another digit will be added somewhere. Then it's anybody's guess.

7 famous Milwaukee movies you can stream for 414 Day

Moving Milwaukee Day video will bring a smile and a tear