After having a daughter, Angela Mancuso decided she was not going to accept or tolerate that violence against women and girls is a natural state of being and so she decided to do something about it. 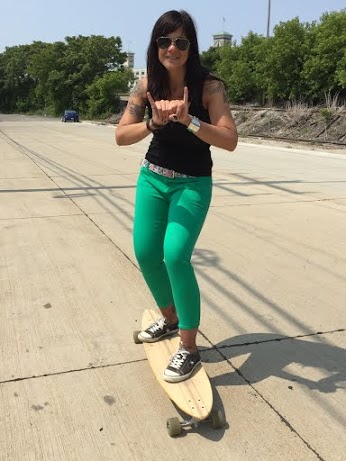 Angela Mancuso was born and raised in Green Bay, but moved to Milwaukee after graduating from high school in 1987. She had a daughter when she was 21 and later graduated from Mount Mary College with a business degree.

Becoming a mother changed everything for Mancuso.

"When my daughter was just born what instantly flashed through my mind was how we would protect her from harm and violence, rape and so on. In a matter of seconds I worked myself into a panic about her future of not being able to walk at night, that her clothing would somehow become the accepted logic behind a sexual assault," says Mancuso. "And then I got angry that I had to even think that way so right then and there determined that I would not just accept or tolerate that violence against women and girls is a natural state of being and decided that I would do something about it."

Mancuso started working at the Sojourner Truth House in 2001 and today she serves as the executive director of the Women’s Center in Waukesha.

"Domestic violence incidents and sexual assaults are so prevalent – everyone knows someone who’s been abused or assaulted and these crimes are at the root of all that ails a community," she says.

OnMilwaukee.com / Too Much Metal: How long have you worked in your field?

OMC / TMM: What time of year/season is your favorite in Milwaukee and why?

AM: I get super excited when it’s the Mama Tried Motorcycle show time of year – such great bike designs, good people watching, tattoos and such. Also, in recent years I’ve looked forward to Milwaukee Psych Fest because of the number of cool bands you can see, as well as, the exposure to several new bands. So fun. Oh, and Mondo Lucha time of year! Love it.

AM: I love the smell of chimneys in the fall and winter – evokes the coziness of fireplaces. And Indulgence Chocolatiers smells awesome. Conversely, I greatly dislike the way the city smells the day after a street or neighborhood festival – like warm PBR.

AM: Aside from hoping for on-going and continued community resolve to eliminate homelessness and hunger, equity amongst all people, a homicide rate of ZERO, the elimination of family violence and sexual assaults, and more safe, affordable housing and more jobs with livable wages? I’d hope for ALL of the potholes to be magically fixed.

AM: I fell in love with Milwaukee as a young kid when we would come down here to visit family and go ice skating at Mayfair Mall. That was a cosmopolitan experience for me as a kid. Also going to State Fair, eating the corn on the cob you would dunk into a Folger’s can of melted butter and then walk around among the masses who all had matching butter stains down their shirts.

In high school I would come down here to go to Summerfest and / or to see bands at the Odd Rock, et al. So as a youth, Milwaukee always seemed to have so much to offer and I couldn’t wait to move here after high school. Also, it is a great city to raise a child – the lakefront, the schools, so much to do! That all said, it boils down to the people.

We have a veritable hive of entrepreneurs, musicians and artists that have helped transform the city; coupled with some outstanding social services and activist movements of those who will stand up for what they believe in. Milwaukee is a very cool city.

OMC: Why do you do what you do?

AM: Working with survivors of sexual assault and abuse or domestic violence at The Women’s Center means that each child, woman and man we are connecting with can get the support, compassion and respect they deserve and need to move beyond the violence. We have countless success stories. All of that translates to a significant reduction in crime – violent or otherwise, which leads to a healthier, more vibrant community which leads to a parent eventually not having to fear or dread their child’s future.

OMC / TMM: What neighborhood do you live in?

OMC / TMM: Name a Milwaukeean you would like to high five?

AM: Samson. I adored that big, hairy ape.