While Western Kentucky isn't the most formidable opponent, the Badgers sure looked impressive with their 34-3 win over the Hilltoppers to kick off the 2018 season. Here are seven takeaways from Friday night's victory.

While Western Kentucky isn’t the most formidable opponent, the Badgers sure looked impressive with their 34-3 win over the Hilltoppers to kick off the 2018 season.

With a packed student section as well as fans and alumni from throughout the state ready to cheer on the fourth ranked Badgers – Wisconsin’s best preseason ranking since 2000 – everyone in attendance had expectations of a high-scoring blowout for a rare Friday night game. Lucky for Madison, the Badgers delivered.

Riding the momentum of their last performance, a 34-24 win in the Orange Bowl over N0. 10 Miami, the Badgers began their season 1-0 and will return to Camp Randall on Sept. 8 to take on the Lobos of New Mexico.

It will be a long road to the college football playoffs, but after a 13-1 season last year and a number of starters and All-Americans returning to the roster, fans in Wisconsin are asking: if not now, then when? More than ever, a trip to the National Championship looks like a realistic goal to kick off the season.

Although a home win over a non-conference opponent should be taken with a grain of salt, here are seven takeaways from Friday night’s victory. 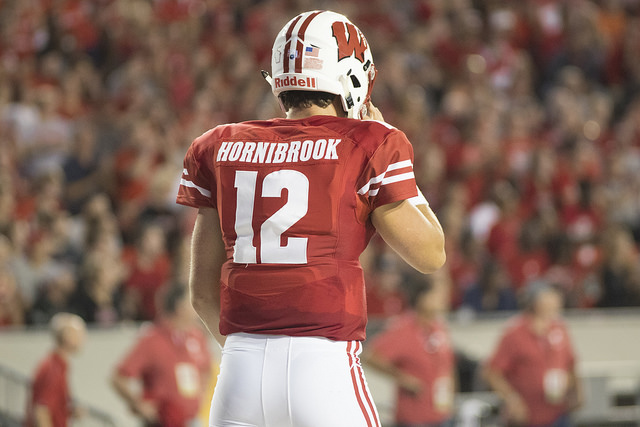 Alex Hornibrook continued to improve for the Badgers last season, and as a result, he entered Friday night’s game as the unquestioned starting quarterback for Wisconsin.

In 2017, Hornibrook improved his stats in almost every area relative to his number of attempts, including touchdowns, yards, completion percentage, QBR and more. However, one area that needs focus is his interceptions, as he was picked off 15 times last season.

Although just one game in, it already looks as if Hornibrook’s offseason training is paying off. The redshirt junior had no interceptions in his 29 attempts on Friday.

Even without a couple of his best receivers, Hornibrook had no trouble taking care of the football against Western Kentucky – something Badgers fans are hopeful will continue against tougher opponents in the Big Ten throughout the year.

2. The best O-line in the country 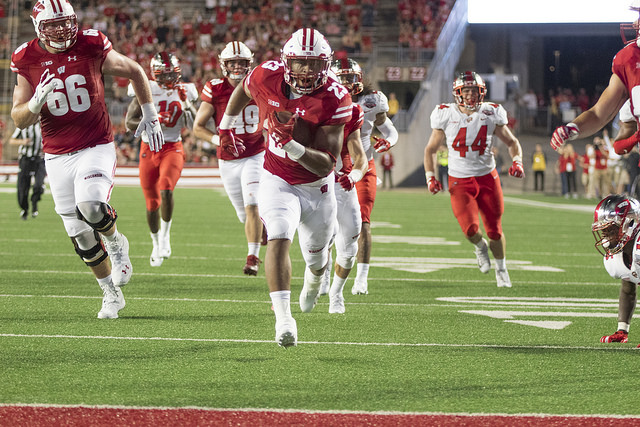 One thing that helped Hornibrook stay accurate against the Hilltoppers was Wisconsin’s dominant offensive line.

The Badgers easily had one of the most impressive O-lines in the country last year, so Big Ten defenses will have their work cut out for them this season as all five starters have returned for the Badgers – three of which received All-American honors in 2017.

Throughout the entire night, David Edwards and company embarrassed the Western Kentucky defense, creating holes for Jonathan Taylor and giving Hornibrook plenty of time to throw the football.

The O-line stood tall and helped account for 234 yards of rushing throughout the four quarters of play.

3. No sophomore slump for Jonathan Taylor 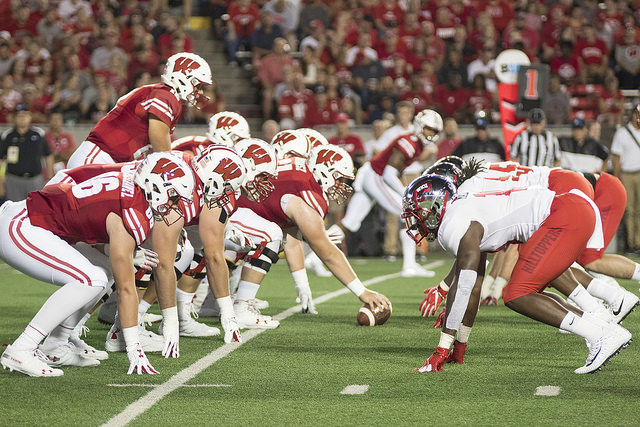 With 13 touchdowns and a record-breaking 1,977 yards rushing, the most ever for a freshman, expectations for sophomore running back Jonathan Taylor are huge.

Taylor is one of the favorites in this year’s Heisman Trophy race, and with his five best friends on the O-line returning in 2018, Taylor is poised to have a great season.

One game in, Taylor’s momentum from last year is showing no signs of stopping. The New Jersey native rushed for 145 yards on 18 carries, and tacked on two touchdowns, a hair above his 141 yards per game average from 2017.

4. The Badgers have serious playoff aspirations 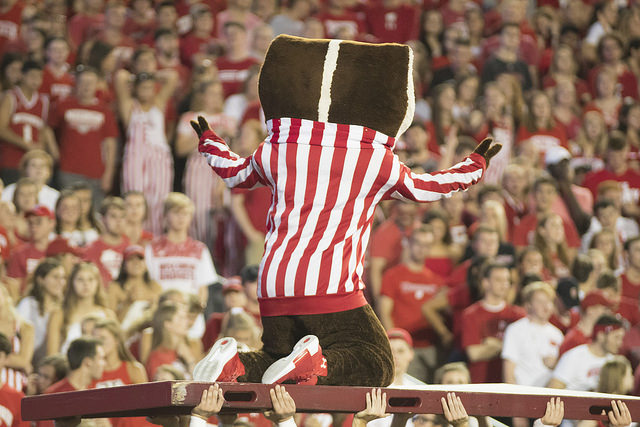 The Badgers are no joke this year. After exceeding expectations in 2017 with a school record 13 wins and an undefeated regular season, Wisconsin is a serious contender.

The success hasn’t come overnight, however, as the Badgers are just one of four schools to win at least 10 games each of the last four seasons, with Ohio State, Alabama and Clemson being the other three. Winning has been consistent for Wisconsin, but they are desperately looking to get over the hump and make the college football playoffs for their first time.

And while their schedule will be no cake walk, Wisconsin has what it takes to beat all the opponents ahead of them. The Badgers benefit from being in the Big Ten’s easier division, and will not play either Michigan State or Ohio State in the regular season.

The sizeable win against Western Kentucky was a given, but the real tests will likely come on the road and against some stronger conference opponents. Getting to the conference championship will not be enough, as the Badgers will have to finally win the Big Ten Championship game to help solidify a spot in the playoffs.

Based off Friday night’s performance alone, fans throughout the state should have great confidence in the program.

5. You know what to expect with Wisconsin 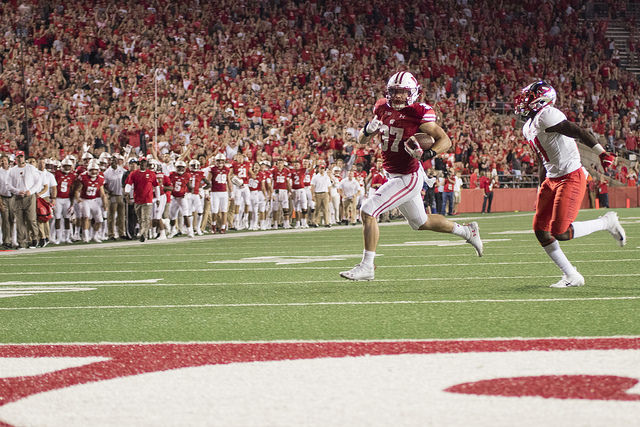 Boasting the best running back and O-line in the nation, it’s no surprise that the Badgers are looking to run and run often. The program has a history of impressive RBs that will always get their fair share of reps.

While some teams will beat you with their wild cards and unpredictable game plans, the Badgers come with very little surprises – yet their running game is still near impossible to stop most weeks.

To no surprise, the Wisconsin offense ran the ball from endzone to endzone on Friday, totaling 39 carries throughout the night. This game plan was not specific to the Hilltoppers; you can expect more of the same next week against New Mexico. 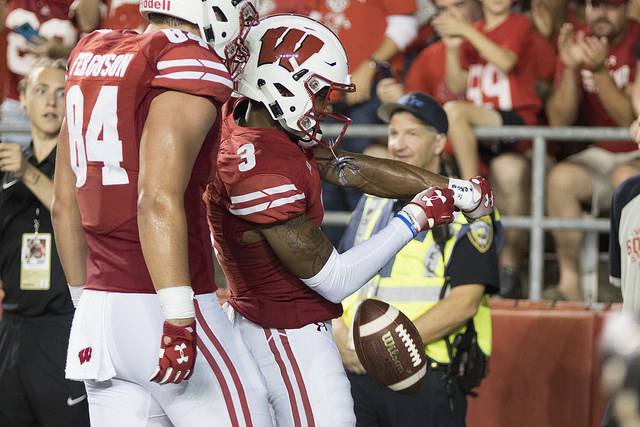 Two missing cogs in the Wisconsin wheel on Friday were wide receivers junior Quintez Cephus and sophomore Danny Davis. Cephus has been suspended indefinitely and Davis has been suspended for two games, from an April incident the resulted in two charges of sexual assault for Cephus.

It’s unclear whether Cephus will suit up for the Badgers this year, so Hornibrook will have to find receivers elsewhere. Cephus and Davis combined for 11 touchdowns and nearly 1,000 yards last season, despite Cephus missing the final five games of 2017 with a broken right leg.

The receiving core took a "next man up" approach and all handled their own on Friday. A.J. Taylor totaled 85 yards on five receptions, while Kendric Pryor added another 51 yards with four catches on the night. Time will tell whether the wide receivers will be the team’s weak link throughout the year.

7. The defense looks to be one of college football’s best 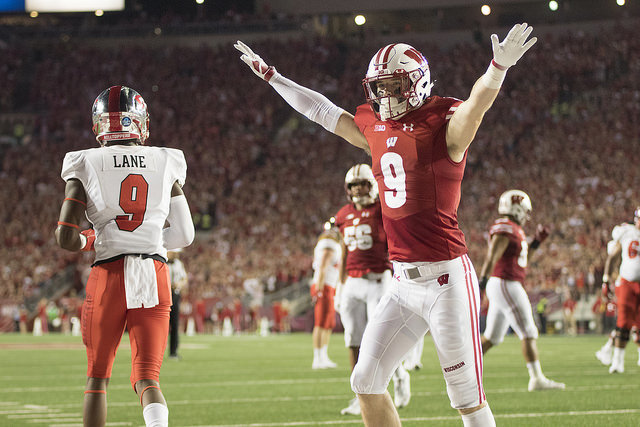 The Badgers put together one of the best defensive cores in the country last season, finishing second in total defense (262.1 yard per game), third in rushing defense (98.4 yards per game) and third in scoring defense, giving up less than a two touchdown per game average.

Unfortunately for Wisconsin, the Badgers lost seven starters (including team captain Jack Cichy) on defense – but it sure didn’t look like it on Friday.

LB T.J. Edwards is one of the best players in the country and finished second on the team with 81 tackles and picked off four passes. With his return, the Badgers look to continue their success on D.

On Friday night, returning stars Edward, Chris Orr and Ryan Connelly helped show the nation that the Badgers can be just as dominant in 2018. The defense gave Western Kentucky QB Drew Eckels and team’s running backs a ton of trouble from start to finish, and forced two red-zone turnovers while only giving up 181 yards passing and 124 total yards rushing. Most importantly, the defense only gave up 3 points to the Western Kentucky offense.

Wisconsin looks to have one of the best defenses not only in the Big Ten, but the entire country.