The Wisconsin Badgers enter the Big Ten tournament in an unusual spot (historically) - as the favorite to win it all. With a national player of the year candidate and potentially three future NBA players, is coming home with anything less than a championship enough?

Things are rolling along for Bo Ryan’s Wisconsin Badgers this season, with "only" an injury to senior point guard Traevon Jackson clouding what many expected from the very beginning to be one of the best seasons in the program’s history.

No, the Badgers were never going to go undefeated, so the occasional loss, even in conference play, can be forgiven.

But they were expected to win the Big Ten regular season conference title, which they did with an impressive 16-2 mark in conference play, which tied the 2007-08 squad as the best in school history.

That’s the weight that comes with returning nearly every key player from a Final Four run from the year before and being ranked as the No. 3 team in the nation at the start of the year.

The Jackson injury tested the Badgers’ depth, sure, but then comes in Bronson Koenig, who has more than capably filled the role.

As has senior Frank Kaminsky, a pre-season All-American who not only didn’t shrink from the spotlight, but has blossomed even more under it in averaging over 18 points and eight rebounds per game. Now, national pundits say the national player of the year race is between him and Duke freshman Jahlil Okafor.

Sam Dekker has been more consistent a the team’s second leading scorer and Nigel Hayes can be a force of nature in spots.

But now, it’s tournament time, when it’s one and done.

Fortunately, the Big Ten tournament that kicks off on Wednesday at the United Center in Chicago is just the appetizer for the Big Dance, which begins in about a week.

The Badgers can afford an upset and still earn a high seed and preferable region in the NCAA Tournament. But this tournament will be a little different in that they won’t be the fourth-seeded "underdog" that reached the tournament finals in 2013.

They’re a favorite, like when Marcus Landry carried that top-seeded 2007-08 team to a tournament title. It's a harder deal to close when you're the king. 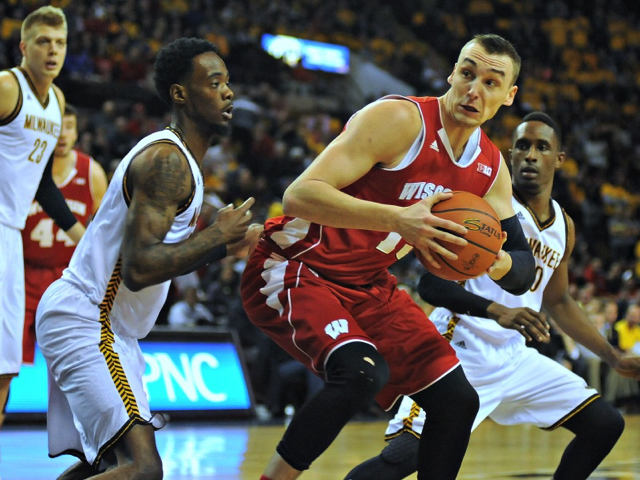 It is a tournament, of course, so anything can happen.

Wisconsin, Purdue and Michigan State have also won in that time.

Runners-up have included Minnesota and Penn State. There is always a Cinderella.

But the Badgers have proven throughout the course of the long Big Ten season that they are, indeed, the cream of the crop – losses to Rutgers and Maryland, notwithstanding.

But, what those losses hint at is the ability for the Badgers to be beaten by "inferior" opponents.

It's easy to dismiss them in that they can be forgotten and built upon because during the regular season, there is always a "next game."

Not so in tournament time.

I’m curious to see if the Badgers can just dominate from the outset, and close over the better teams at the end.

Yes, most of these guys lost in the Big Ten tourney last year and then turned it on until the penultimate game in last year’s NCAA tournament, but while experience counts, every year is different.

Kaminsky has been great, and deserving of all the accolades he will receive, but can he he dominate from start to finish? Will Dekker remain on the floor for heavy minutes, and get to the rim when its most needed? And while Koenig doesn’t play afraid, I’m curious to see how he handles the ball, and running the offense, in a win-or-go-home situation.

It’s a good practice run for these Badgers, really. Many, including the team itself, will be disappointed if they don’t sweep the Big Ten trophies this year. But either result – an unexpected upset or a run to another net-cutting ceremony – could bode well for the biggest stage as they aim to win a national championship.