Bartender confidential: Secrets and stories from behind the bar

Jessica Schlitz is a career bartender. With her years of experience, the 46-year-old Mequon native has seen a lot. But now that she's not currently bartending, she's willing to tell the stories most bartenders would never divulge.

Jessica Schlitz is a career bartender. Over the years, she’s worked all over Milwaukee, mostly Downtown and in Riverwest and, at one point, owned the long-gone Orbit in Walker’s Point.

With her years of experience, the 46-year-old Mequon native has seen a lot. But now that she’s not currently bartending, she’s willing to tell the stories most bartenders would never divulge.

We caught up with Schlitz at the Uptowner, a bar she worked at for years, where the regulars give her hugs and still expect her to pour shots. Her answers to our questions are surprisingly frank and honest. Welcome to Bartender Confidential.

Jessica Schlitz: That’s a tough one. It depends. I think, sometimes, depending on what I'm wearing, and what's going on that night, the guys will tip better. Because, boobs. Tits for tips.

What if you don’t want to a do a shot when someone buys one for you?

Well, usually I want to do it.

But if you don't?

I just tell them I can't do it. Or give it to a friend, or some dude.

Is there ever a fake shot involved?

I think I might have done it once, but not really.

Is it hard to tend bar if you're drunk?

If you're super drunk, yeah. I would take the order, and then forget. That was my first Saturday bartending. I'm like, "Booze, free!" It didn’t go so well. 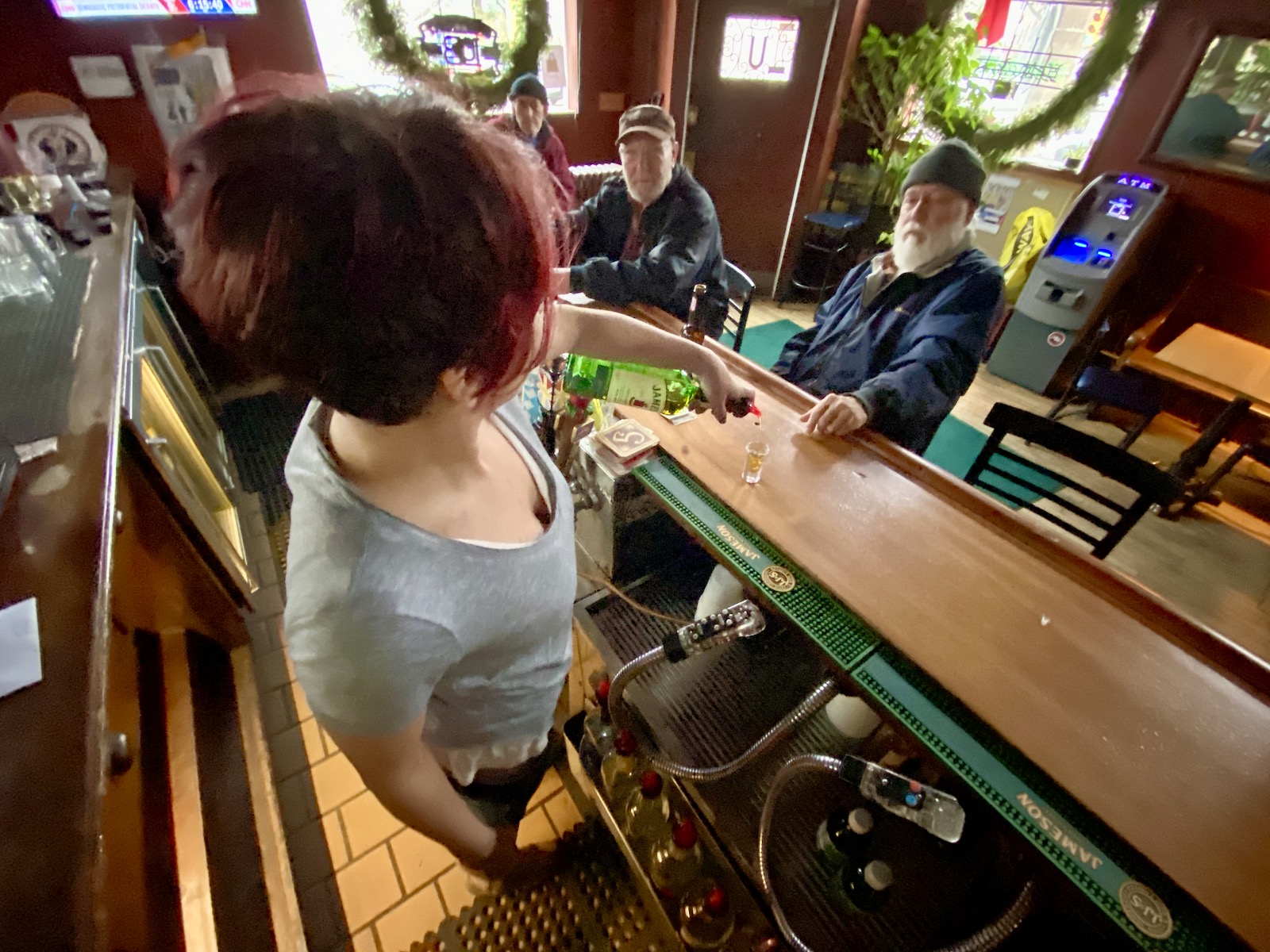 As a bartender, do you always have to say yes to bar dice?

If you're really busy, no, because there's no time. I prefer to take the money. But I usually play a lot of it. I like it. And the pressure of winning is off when you're behind the bar.

What about people who are obviously having an affair? Do you see that happening?

Probably. I've seen a lot of people making out and having sex.

You've seen people having sex at the bar?

What did you do? Did you stop them?

Have you had to kick a lot of people out of bars?

A fair amount. A dozen and a half, maybe. I've definitely had to throw down some weight. I've grabbed and pulled. Like, when I break up a fight ...

You've had to break up fights before?

Oh, hell yeah. Yeah. You get into the middle.

Well, I don't know, because I don't think you're scared in the moment, because you're just pissed. So you get all that adrenaline, and you're a little drunk, so you're like, "I don't give a f*ck. I'm He-Man."

Are "bartender" ears a real thing?

I think so. I always hear all the weird things, even out at the supermarket.

Do customers ever hook up with bartenders, or does that not work?

It's happened. I've hooked up with customers. I've met guys through bartending. I was dating three guys ... well, not "dating" dating, just kind of casual, going to dinner, whatever. This was when I was at Orbit. Then they all three came in. That was fun.

So it is possible for a customer to pick up a bartender?

Sure. I think so. It could happen. I've met guys here and dated them.

What if someone's wasted? Do you ever water down their drinks?

Oh, I've done that a couple of times. This guy Charlie, he was cool. But he would drink whiskey and Coke ... you had to stop him. So one time I just poured him regular Coke. And he’d say, "This is the best one you've ever made me!" Like, it's just soda. I told him years later that I did it.

As a bartender, you shouldn't be serving people who are really drunk, right?

Yeah. Because if they get in an accident, the bar could get in trouble. It happened to my friend Nick; he over-served, and the chick crashed on her motorcycle.

So how do you cut people off?

Just say, "You're done." Take the drink. One time, it was pretty packed, and it was a younger crowd. This chick came up and ordered, and she looked super young, so I'm like, "I need your ID." She said, "No no, I don't have my ID. I've already been drinking here." But if you're at the bar, we can still ID. Just because you're in the bar doesn't mean you get to stay. So she got all mad, and obviously she was underage. She threw a beer in my face.

Do people still use fake IDs?

We haven't really seen as many. In my whole bartending career, I've only seen a couple. 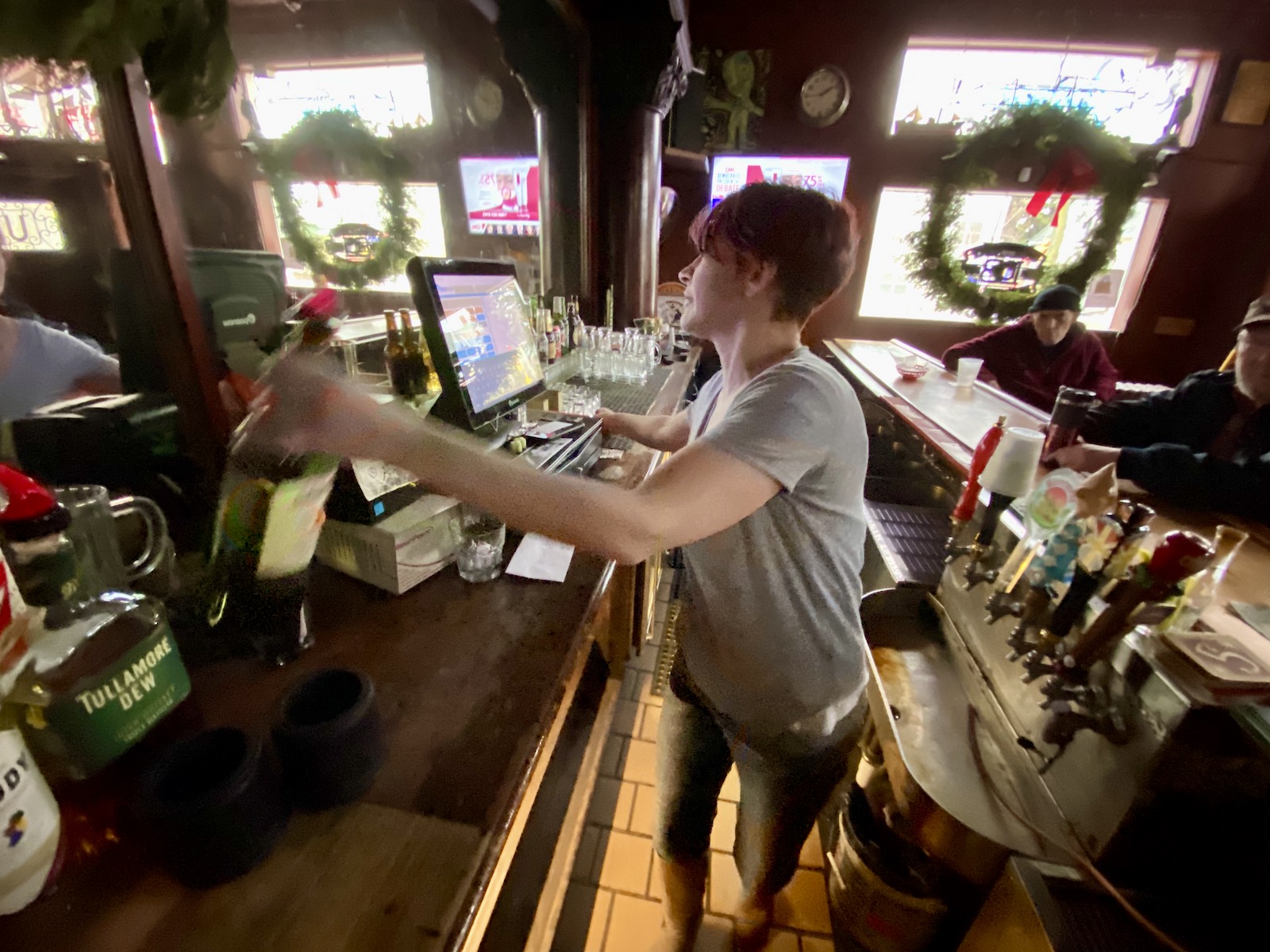 Do people ever use counterfeit money?

Yeah, one time. There's a bartender page on Facebook and was warning people about fake 20s. We were on the look-out.

Did you catch them in the act?

I looked at one and, like, I knew that something was going on. A guy would come in and order, because it was a dollar per beer. So he'd order a dollar beer and get $19. And then the next time, there's another 20. So we noticed.

Did you ever see nudity at the bar?

I've seen plenty of boobs. This one chick, for hours, was just sitting there with her shirt off. Oh my God. We finally got her to put a shirt on. Then this other guy comes in, and we're telling him about it, and it’s back off again.

What about the slot machines? They're not really for amusement only, right?

There's a person that comes in. We write the points and stuff down. And then, when the dude comes in and collects the money, he pays them.

What about people who pay by credit card, but leave the credit card at the bar?

Oh yeah. Well, I just try to close it out, and then figure it out.

Do you give yourself a tip?

Have you seen a lot of drugs being done?

Oh, plenty of drugs get done. They'll do weed, coke. That's it, really. The basics. At most every bar, I think. Everywhere I've worked are people I've seen who are doing drugs, and dealers and stuff. Sometimes people sneak in their own booze. That I get pissed off about. Like, just make sure you're not in the bathroom for 100 hours. If you do it like nobody notices, then whatever. It's not worth it.

What about smoking in the bars? Does anyone still do it?

No, I haven't seen it, really. I think some people, when it's like negative degrees out, smoke in the bathroom, or they'll stand right in the doorway. But not straight-up. I don't miss it, either. I mean, I've smoked cigarettes a long time. I'm cutting down, but I don't miss the bar being smoky. It was gross.

So when the bar closes, how much longer do you have to stay here?

Not that long. Depends on the bar. I mean, you've got to obviously clean the stuff, dishes, nothing sticky and gross, soak the water gun. Chairs up, sweep if you want to. It’s about 3 a.m. if we just do the basics, the usual stuff or 3:30 a.m. on the weekends.

8 things I miss about Milwaukee's bars