Milwaukee has its share of first rate chefs these days, making the decision of who to name as "best chef" more and more difficult each year. But, it was a solid Bartolotta's win this year with Chef Adam Siegel bringing home the gold for best chef.

Milwaukee has its share of first rate chefs these days, making the decision of who to name as "best chef" more and more difficult each year. But, it was a solid Bartolotta's win this year for best chef in Milwaukee, with Chef Adam Siegel bringing home the gold.

Siegel received his formative training at Chicago's Spiaggia under mentor and James Beard Award-winning Chef Paul Bartolotta before making his way to Milwaukee to open Lake Park Bistro; in 2008, he was honored with the James Beard Award for Best Chef Midwest. Since then, Siegel has been promoted to corporate executive chef and managing partner for the Bartolotta Restaurant Group.

Runners up include past winners Justin Aprahamian of Sanford and Justin Carlisle of Ardent along with Peter Sandroni of La Merenda and Daniel Jacobs and Dan Van Rite of dandan.

Lori Fredrich's pick: Thomas Hauck (c.1880)
There are a number of chefs I could have chosen, some whose food pushes boundaries and still others whose commitment to the community is unparalleled. However, this year my vote goes to Chef Thomas Hauck, who not only has contributed a gem to the fine dining scene in our city, but also made a commitment this year to revive Karl Ratzsch, one of Milwaukee’s iconic restaurants. In doing so, he put in the time, consideration and research that it took to really bring the venue back to its roots as a destination for German cuisine. Kudos, Chef Hauck. And thank you.

This year we also asked a variety of prominent Milwaukeeans to weigh in on their pick for specific categories. For this category, we consulted Chef Jan Kelly, former chef and owner of Meritage. 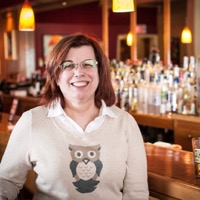 Kelly's pick: Ross Bachhuber (Odd Duck)
This is an impossible question. And everyone on this list is deserving for a different reason. But, Ross Bachhuber from Odd Duck creates food that is inventive, different, creative, beautiful … all of those adjectives that make a restaurant so incredible to dine at. He and Melissa Buchholz make a great team. They’re community oriented, and the fact that they’ve welcomed and supported so many other chefs is just really admirable.