Bitters have long been used to add complexity to cocktails. But the talented staff at Bittercube have taken the use of bitters a step further, reducing waste (and making their cocktails tastier) by infusing the spirits at the bar with the byproducts of the bitters making process.

Bitters have long been used to add complexity to cocktails. In fact, every cocktail gleans benefit from a dash or two of a complementary bitters blend, since the botanicals in the bitters assist in accentuating flavors and adding depth and balance to the drink’s flavor profile.

It’s something bartenders across the country have been doing for years; but it’s become the foundation of the bar program at Bittercube Bar & Bazaar, 4828 W. Lisbon Ave.

In fact, the talented staff at Bittercube has taken the use of bitters a step further, reducing waste (and making their cocktails tastier) by infusing the spirits at the bar with the byproducts of the bitters making process.

"We always say that bitters are the spice rack of the bar. But when you infuse spirits with those flavors, they become more of the protein," says co-owner Ira Koplowitz. 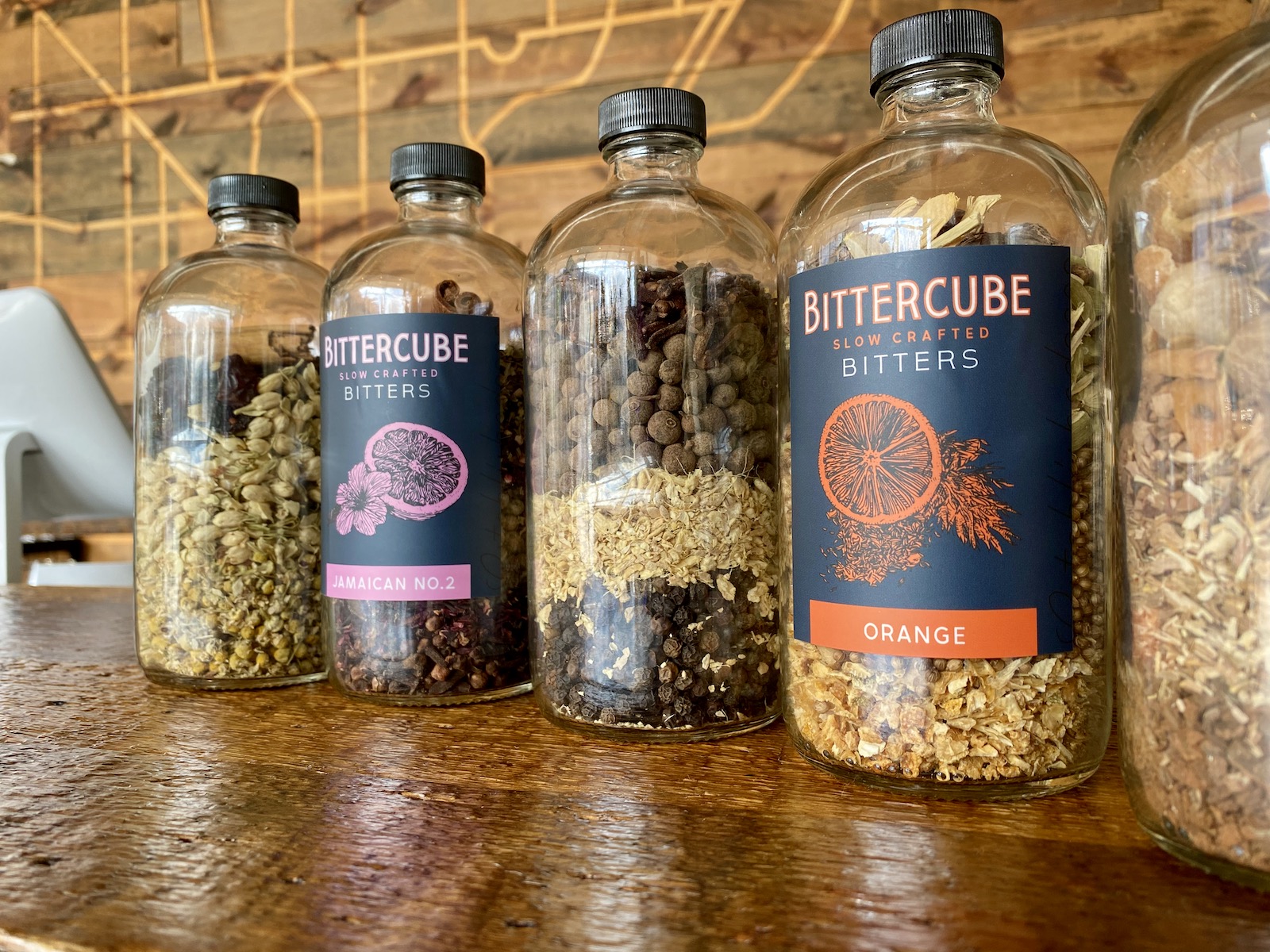 The process that makes it all possible

While many bitters companies use extracts to create their bitters, the Bittercube process relies on real fruits and botanicals including fresh citrus peels, vanilla beans, herbs, whole spices and bittering agents including dandelion root, wild cherry bark and gentian.

Citrus fruits are hand-peeled and mixed to specifications with complementary botanicals, which are placed in stainless steel tanks with high proof spirits (rum, neutral grain spirits or whiskey) for a period of 20 to 30 days. During the infusion process, botanicals are agitated daily to increase the saturation of dried materials and assist in releasing the flavors in the botanicals. From there, the bitters are double filtered and bottled for retail sale.

What’s left at the end of the process is a flavorful mix of high quality botanicals, which would ordinarily be destined for the compost bin or trash. In fact, for years, the bulk of Bittercube’s mash ended up in the hands of Compost Crusaders. 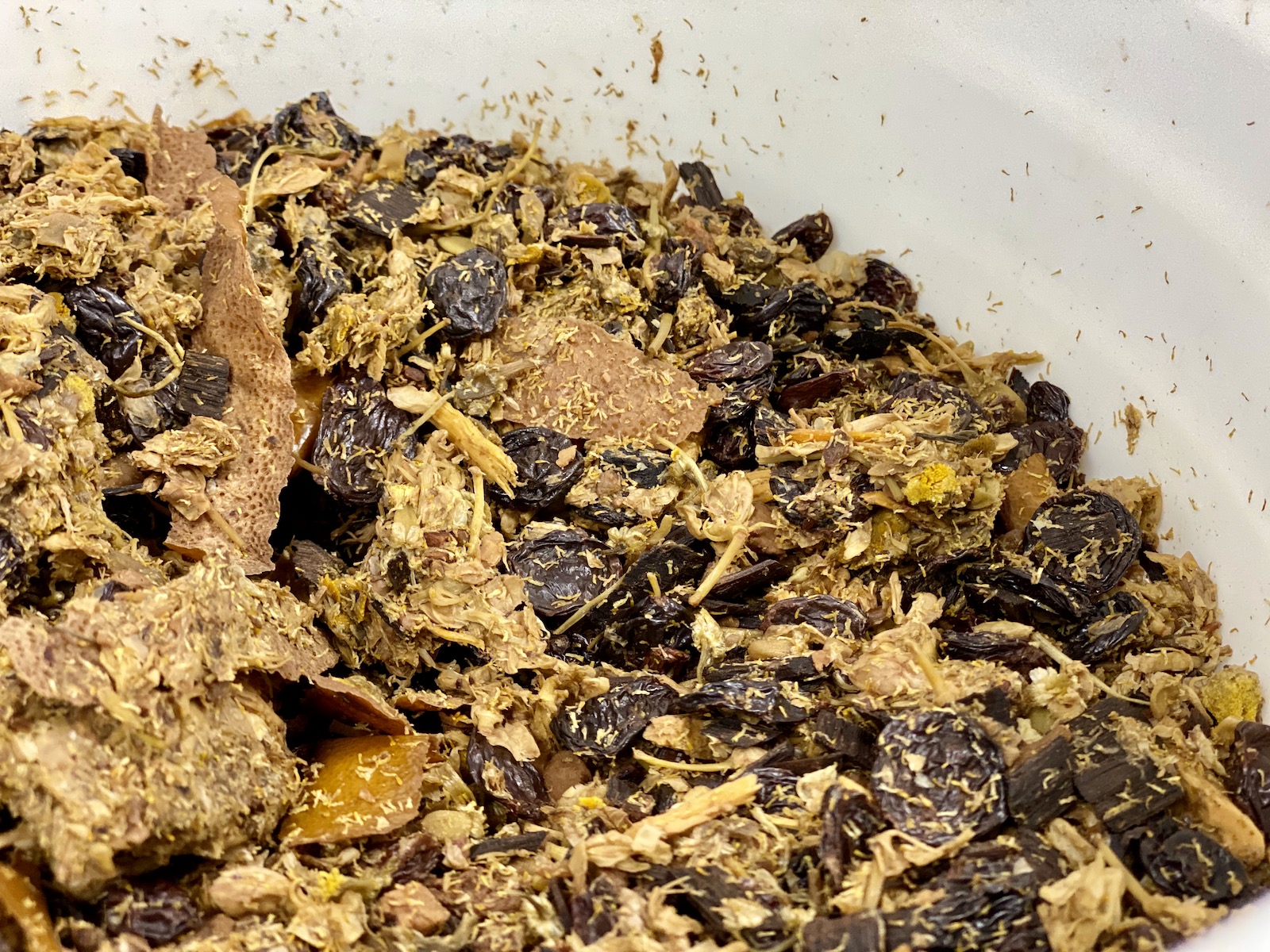 However, when the bitters manufacturer made the move to a larger facility in Uptown Crossing, which accommodated the addition of both a bar and retail shop, they began to take a closer look at alternative uses for the mash.

Since the intensity of flavor in the mash has been reduced by the bitters-making process, they cannot be reused to make additional batches of bitters; however, enough of the flavor compounds remain that it can be used for other purposes.

Some of the orange bitters mash is delivered to Purple Door Ice Cream, where it’s used to infuse their bitter orange and dark chocolate ice cream with complex notes of bitterness and fruit.

But Bittercube is also using the mash to boost the flavor profiles in their cocktails by infusing their flavors into the spirits used at the Bittercube Bar. 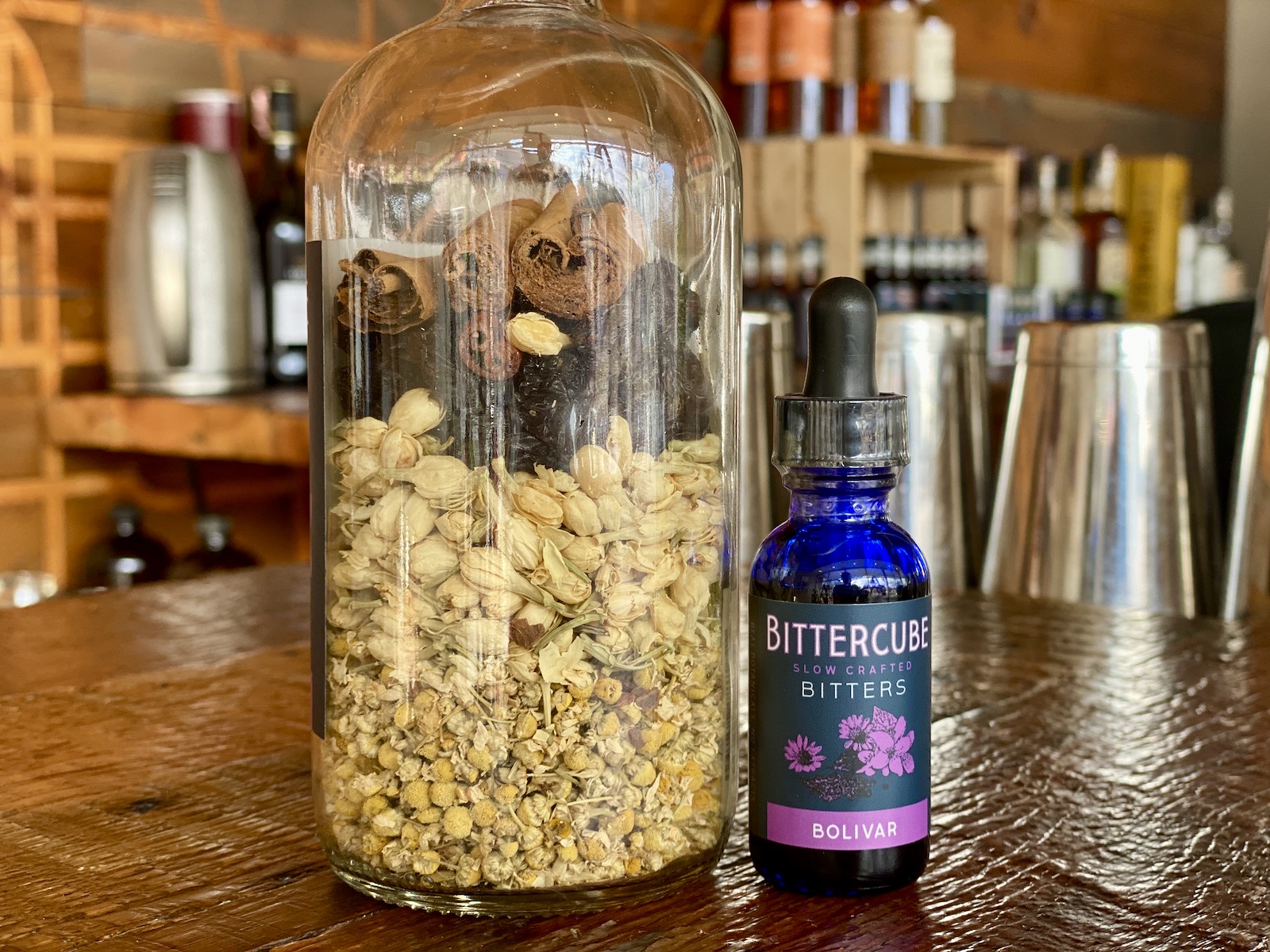 On a visit to the Bittercube production facility this week, we found Nick Gomaz infusing Bolivar bitters mash (a mix of chamomile, jasmine, cinnamon, prunes, raisins, cloves, gentian and orange peel) into both wheat whiskey and gin.

The infusion process is relatively simple. In the case of a Bolivar Bitters mash infusion, bitters mash is combined with spirits in a ratio of 20 grams of mash to every 100 liters of spirits. 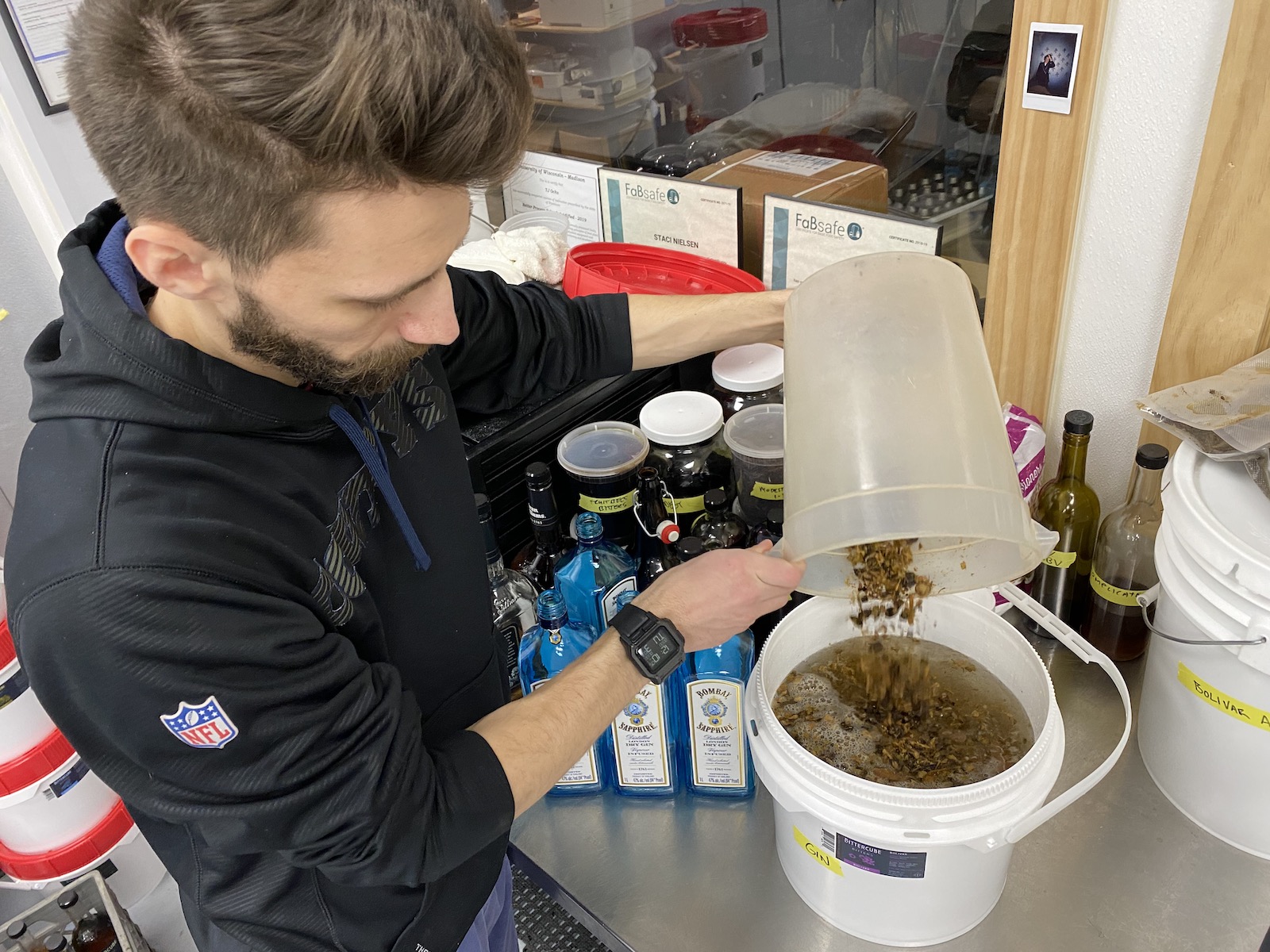 "The botanicals express themselves quite differently on their second use," says Brandon Reyes, who manages the bar and handles R&D for Bittercube products and cocktails. "Vanilla goes from being round and sweet to earthy, smokey and a bit more tannic. Cinnamon remains strong through both stages. And the bittering agents hold on to their bitterness, so it’s really important that we keep the infusion process short so that we don’t draw out too many of the bitter flavors."

As a result, the infusion process is limited to just 24 hours. But during that time, the flavor compounds in the spirits marry with those of the botanicals in the mash, creating uniquely flavored spirits that are infused with some of the characteristics of the bitters. 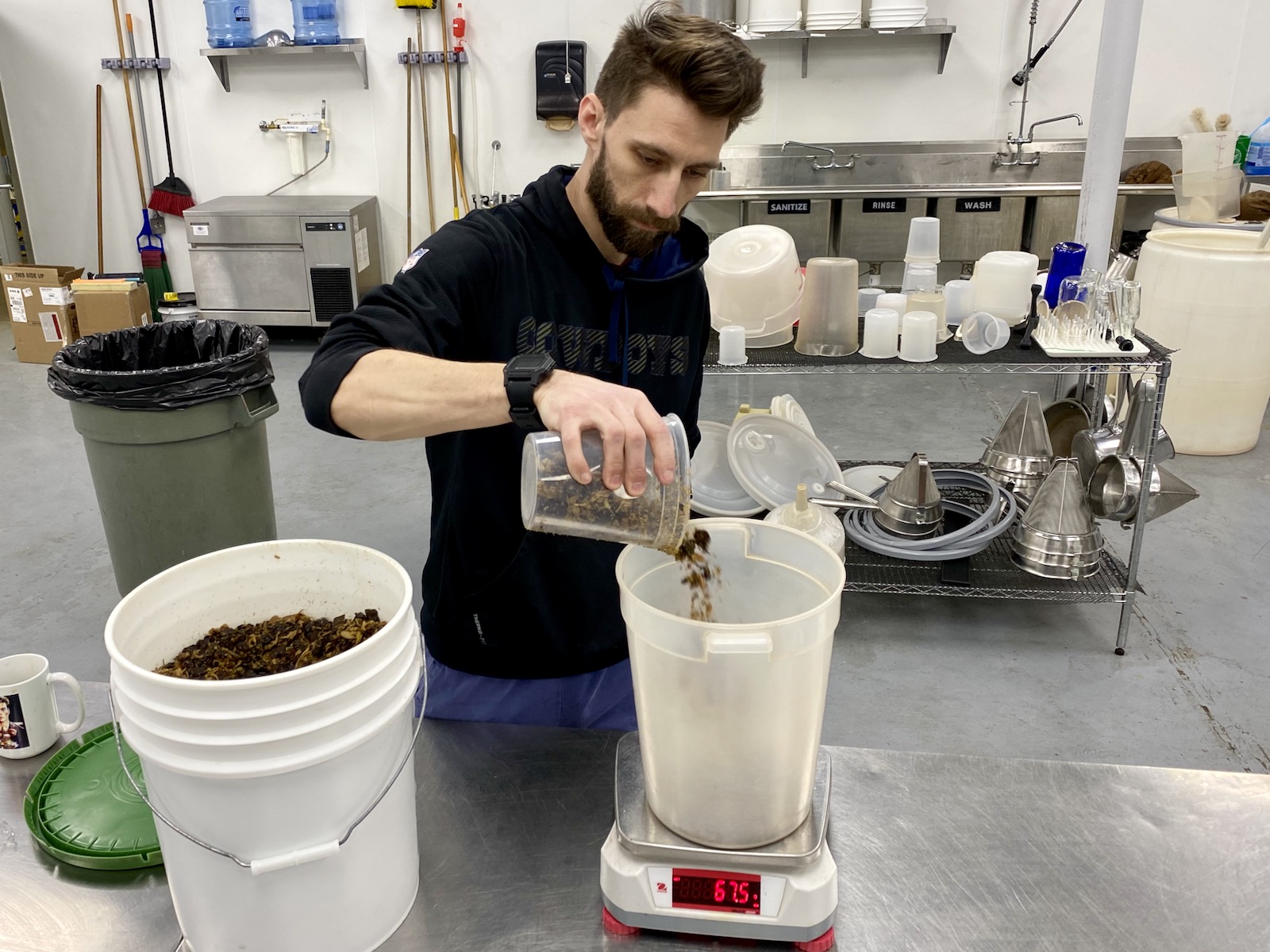 In the case of Bombay Sapphire gin, Reyes says that the Bolivar mash highlights the floral aromatics already present in the gin itself. 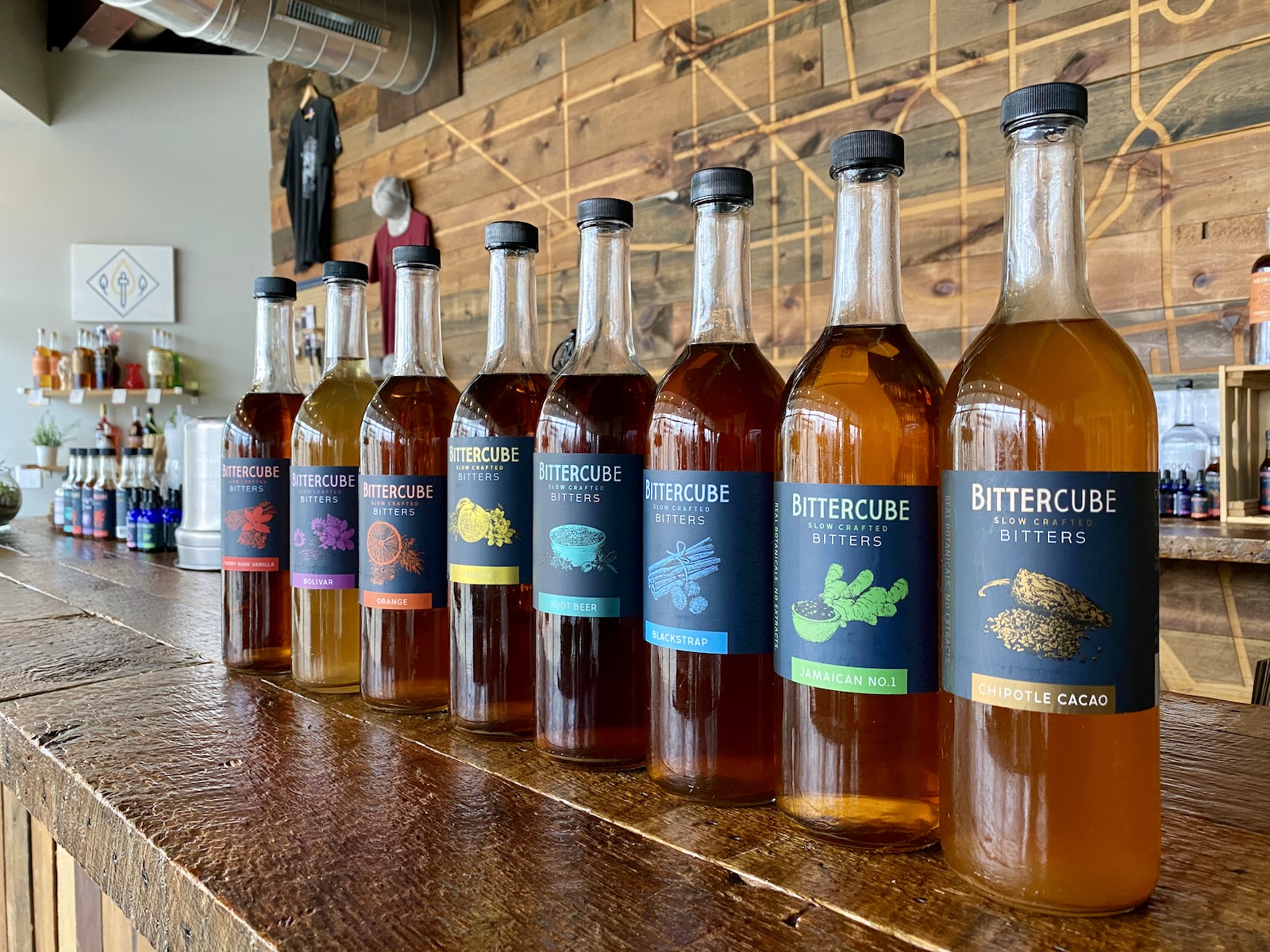 "We’ve been doing mash experiments for a long time" says Reyes, "But we really came to the process in earnest at the end of this summer. We’ve featured cocktails using the infused spirits on menus for a while, but our current menu is the first in which the structure of the program is fully realized."

On the menu, you’ll find eight cocktails made with mash-infused spirits, from a Manhattan infused with Cherry Bark Vanilla to a Chipotle Cacao tequila cocktail augmented with Heirloom Creme de Flora. All of them utilize Bittercube’s Seven Pillars, along with a liberal dose of creativity, to create tasty unique drinks you won’t find elsewhere.

Among them is a gimlet using the Bolivar infused Bombay Sapphire gin, acidified grapefruit juice and sea salt. Ordinarily, a gimlet is made with lime juice. But Reyes says they chose grapefruit for two primary reasons. 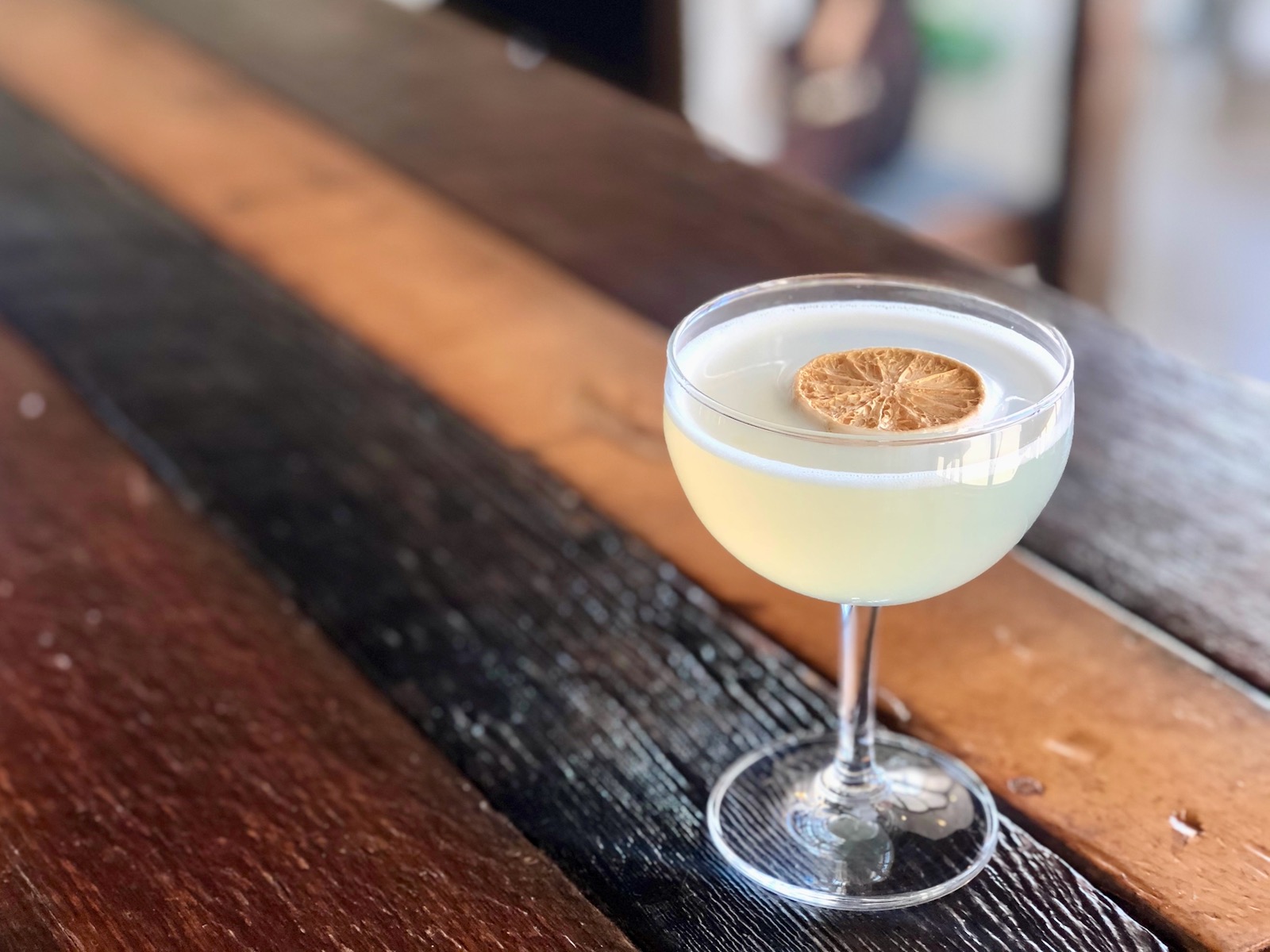 "The grapefruit has a slightly more herbaceous, floral flavor," he says. "So it’s a nice match for gin. But it’s also another waste reduction measure. We’re using grapefruit peel as a garnish in a number of other cocktails and we wanted to make use of the remaining juice. We acidify the grapefruit juice to bring it to the acid level of lime, and then we add saline which helps to balance that acidity while pulling out the more subtle flavors, like chamomile, from the gin."

Reyes says the use of the infused spirits has really changed how they approach cocktails at the Bittercube Bar & Bazaar.

"For the most part, we’re actually using less bitters in the cocktails, since those flavors are already present," says Reyes. "But there are also situations where we’re able to combine the infused spirits with bitters to enhance and balance the various flavor profiles."

A good example is the Old Fashioned, which consists of a relatively standard build of whiskey, simple syrup and bitters. But for this rendition, they’re using the blended Trinity whiskey, muscovado simple syrup (which adds richness and depth, while balancing out the bitters) and additional Trinity Bitters to underscore the citrus and vanilla notes in the cocktail. 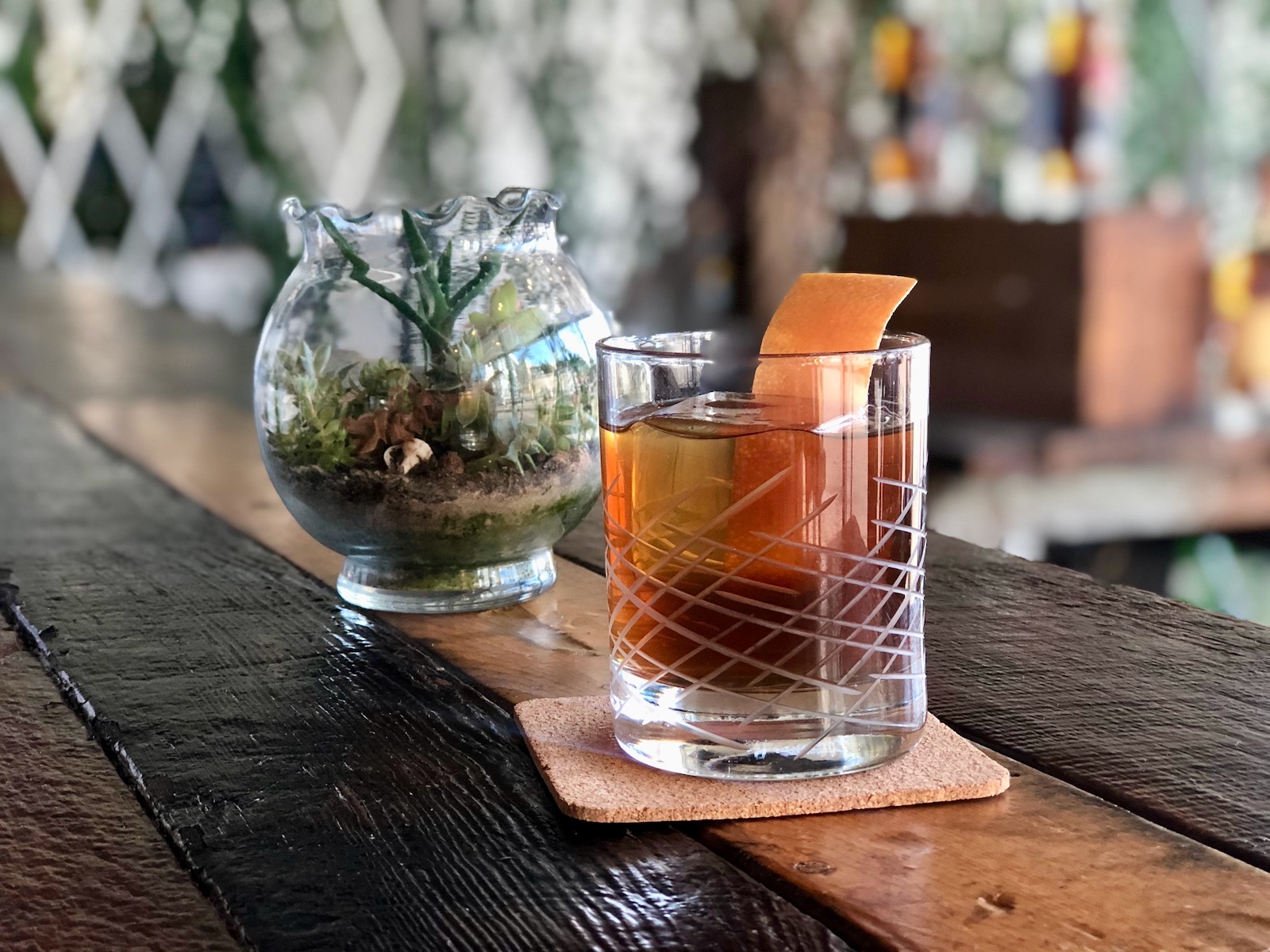 "Bittercube has been around for ten years, but this is the first bar where we’ve have the opportunity to truly showcase our story," says Reyes. "The foundation of our operations begins with bitters, so it makes sense that it’s also the foundation for our bar program. It’s not only a practical solution; it also helps us to paint a fuller picture of the botanicals that we use in the bitters themselves."

Moving forward, Bittercube plans to offer Bitters infusion kits, botanical infused sugars and salts and dehydrated citrus at the Bittercube Bazaar for customers who’d like to experiment with cocktails or Bittercube-infused baking projects at home.