"Over the last year, since protesting the national anthem has been used to try to call attention to issues of race inequality and systemic oppression of people of color, it’s certainly been something I’ve thought a lot about," says Kopischke.

"Regardless of whether you think this is an appropriate way to call attention to these issues and hopefully address them, right now you can’t think of the national anthem before a sporting event without thinking about the protests, so singing it becomes a political act whether you want it to be or not."

Although Kopischke, who has been a professional singer and actor since age 9, never served in the military, many of his friends and family members did.

"Some feel like any protest is a slap in the face of vets and some feel like the protests are exactly what our country stands for – that we can peaceably protest and speak out against the government – and don’t feel a personal affront," he says. "There’s certainly not a consensus or easy answer."

Grappling with the issue, Kopischke reached out to a friend, an African-American and former elite athlete who is now a personal trainer working on a doctorate, and whose father served in the military.

"Because he was a friend, I knew he would permit my ‘hey person of color can you help a white person understand racism better?’ inquiry and we had a great conversation," says Kopischke.

At the end of the conversation, the decision was made Kopischke would sing the anthem wearing a Jackie Robinson jersey.

"I can’t imagine anyone, regardless of what you think of anthem protests or who you voted for in 2016, could not respect and marvel at how he fought for justice. And I know that if I want to truly be an ally in the fight for justice I have to use whatever power, privilege or visibility I have to help bend the arc of the moral universe towards justice, even if just a tiny bit," says Kopischke. "Wearing his jersey while I sang seemed like a small but important statement I could make." 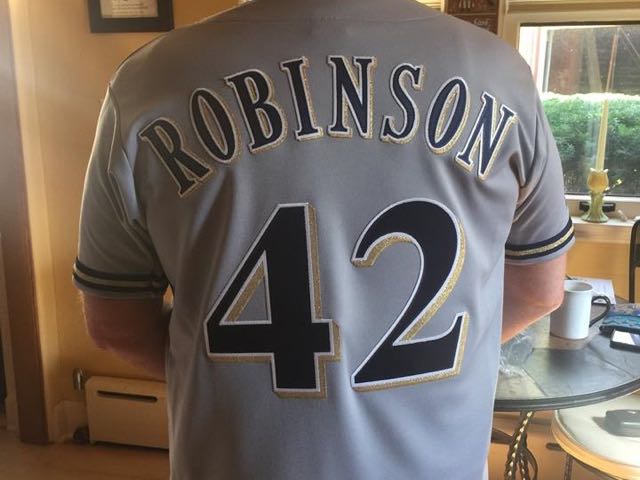