The Christmas Cabbage Patch Kid Craze of '83 is still talked about today. So is the prank by two popular Milwaukee DJs.

This article originally ran in 2018.

We all want to find our special someones the "perfect" holiday gift, but how far we’ll go to get the goods varies from shopper to shopper. Some will do whatever it takes to nab the coveted item – even if it means bum-rushing Best Buy workers or trampling nanas at Targets.

Thirty-five years ago this month, parents who were desperate to procure a Cabbage Patch Kid doll for their hopeful child found themselves wrapped up in a viral-spiraling prank. It happened after WKTI radio morning-show hosts Gene Mueller and Bob Reitman joked on air that later in the day a pilot – named Jack Daniels no less – would fly a B-29 Bomber over County Stadium (the home of the Brewers before Miller Park) and airdrop 2,000 Cabbage Patch Kids.

The DJs went on to encourage people to show up at the stadium with a baseball mitt – to catch one of the dolls, of course – and a credit card. Anyone who caught one of the dolls would hold up their credit card for the pilot to photograph and bill them later.

20-30 people showed up that afternoon to hopefully score a doll from the sky.

"We thought it was ridiculous enough that no one would actually believe it," says Mueller.

The unexpected reaction to what was believed to be an obvious gag quickly became a national news story.

"We got by far the most media attention on this than anything else we did in our careers. All of a sudden Time Magazine was calling, asking for a photograph and we were getting interviewed by DJs in Australia," says Mueller. "All of this for the stupidest damn thing we ever did." 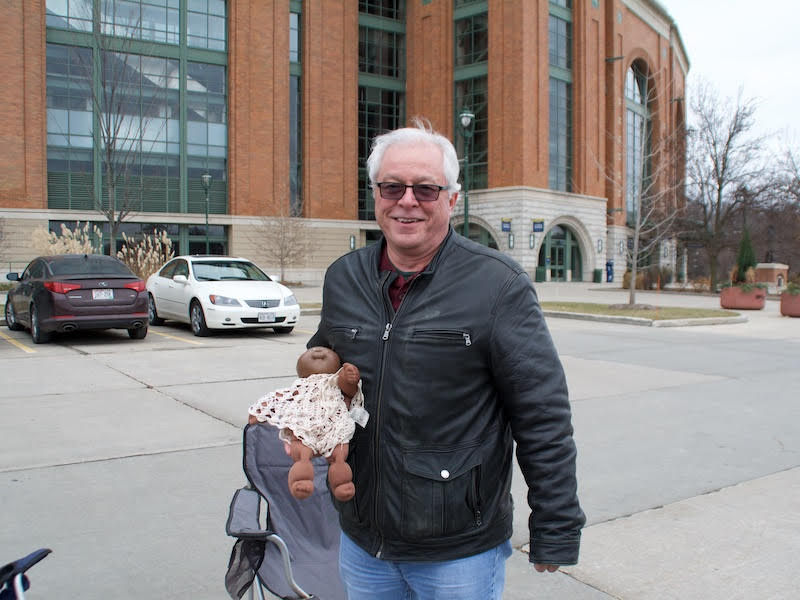 During the holiday season of 1983, Cabbage Patch Dolls were in such rabid demand that hundreds, in some cases even thousands, of people would show up at toy stores hoping to get their hands on one of the squishy, dimpled dolls. Desperate shoppers – primarily parents – were reported waiting in lines for hours before mobbing the stores, fighting in aisles and even trying to storm stockrooms in search of "hidden" dolls.

HBO is currently working on a series – produced by actor Laura Dern – about the Cabbage Patch riots and how they set the tone for Black Friday violence in later years.

In 1983, I received a Cabbage Patch Kid for Christmas – a bald, round-faced "preemie" model – but I was too young to understand the ramifications of receiving one. No, my mother didn't have to strangle someone with her purse straps at K-Mart, but she did ask my father to ask his coworker to ask his spouse who was the manager of a local Toys ‘R’ Us if they could clandestinely pluck a couple from the patch for us. (I had a sister who desperately wanted one, too.)

And it worked. On Christmas morning, I whooped with glee after I unwrapped a Cabbage Patch Doll in my grandma’s living room. Every Cabbage Patch Kid was considered completely unique because it came with a birth certificate and adoption papers embossed with his or her first and middle names and birth date. Mine read "Katarina Jeannie, March 1." Strangely, it had such an impact on me that every March 1st after that, including the one just nine months ago, I mentally acknowledge that it is my Cabbage Patch Doll’s birthday.

Why these dolls were so insanely popular can only be speculated. It was definitely an age of materialism in the United States, and for many parents, obtaining this desired doll demonstrated their commitment to pleasing – and even their love for – their kid.

Plus, the recipient of the doll signed the adoption papers and their parents mailed them back to Coleco, the company that manufactured the dolls, if they wanted to receive a birthday card on the doll’s first birthday. This brought kids even closer to being a real parent to a real baby, which is often at the core of the attraction to playing with dolls.

"It was a false scarcity. Make it in demand and everybody's gotta have it no matter what it is. Pure marketing genius," says Mueller.