Made in Milwaukee: Carmex lip balm

In 1937, Alfred Woelbing began making Carmex by hand, pouring the lip balm into the familiar yellow-capped jars in his Milwaukee kitchen. Today the company is based in Franklin and owned by Woelbing's grandson who says, despite rumors, the product is not addictive.

Made in Milwaukee is new series about the businesses that sell to the world but call Milwaukee home. Presented by House of Harley-Davidson, Milwaukee's locally-owned Harley dealer, we're shining a spotlight on these iconic companies – their histories and their futures.

In 1937, Alfred Woelbing began making Carmex by hand, pouring the lip balm into the familiar yellow-capped jars in his kitchen. The first jar of Carmex sold for 29 cents.

For many years, Woelbing produced Carmex from his Milwaukee home until he moved the business to a Wauwatosa production facility in the 1950s.

In 1975, the business – called Carma Laboratories, Inc. – outgrew the Wauwatosa space and moved to a manufacturing site in Franklin, where it remains today.

Currently, Paul Woelbing, who is the grandson of the inventor of the product, is the president and owner of Carma Laboratories, Inc.

In 1988, the company introduced Carmex lip balm in a squeezable tube and then in 1999 it added "click-sticks" to its product list.

"Both of these were in response to customer requests," says Woelbing.

A few years ago, the company launched a new product, Carmex Cold Sore Treatment. The purpose of the product is to block the itch while minimizing the appearance of a cold sore.

"It works on contact – so you see and feel results quickly," says Woelbing. "While no product can cure a cold sore, this breakthrough product can really help sufferers feel more comfortable and confident."

Carmex is sold in 25 countries. "So many people use Carmex that we sell 130 products every minute," says Woelbing. 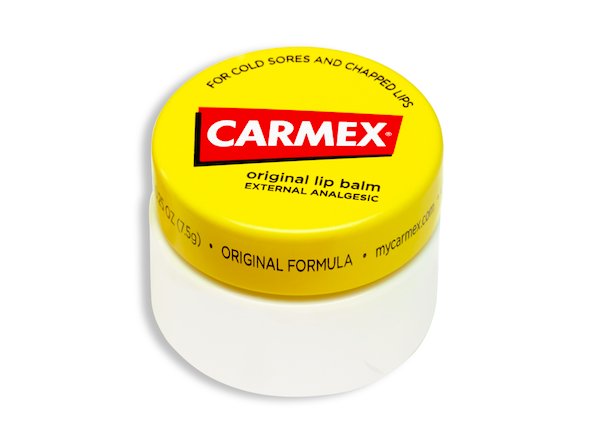 The Carmex recipe is the original family formula, which has been in constant production for over 77 years. Carmex is a mix of moisturizing ingredients such as lanolin, cocoa butter and beeswax combined with menthol, camphor and salicylic acid which promotes healthy skin.

There has been an ongoing rumor that Carmex is "addictive" and the more it’s used, the drier lips become and, therefore, more dependent on the product. Woelbing says this is not true.

"We do hear this but it's based on ‘pseudo-science.’ The reality is that as we age our skin becomes less efficient, just like the rest of our body. As a result, skin tends to need more moisture as we age," says Woelbing.

Woelbing also points out that the consistently changing environment also plays a big factor in the need for dry or chapped skin relief.

"The problem is that we live in all climates simultaneously. For example, you may leave your house in the morning and it’s damp and cool, drive to work in your car that is dry and warm, then get to work where it’s dry and cool," he says. "Our skin cannot adjust to all the environmental conditions we expose it to."

Carmex is regulated by the FDA (Food and Drug Administration) and is in good standing. This is further proof, according to Woelbing, that Carmex is not addictive.

"If there was any truth to such rumors the FDA would not let us produce Carmex. Often when people say that they are addicted to something it’s simply a matter of repeatedly using something that they like – much like a chocolate addiction," says Woelbing.