The snow is falling and it's cold outside, but you can get away to hit the slopes (or a snow tube run) with a jaunt to Christmas Mountain Resort at the Wisconsin Dells.

WISCONSIN DELLS – It’s been a mild winter, of sorts, hasn’t it? There have been some really cold days, that nasty kind of cheekbone-blistering cold, and there have been a couple days where you’ve had to shovel a bit – but on the whole, winter has just been, well, there. Nothing special. Nothing memorable.

Now, that could signal disaster for those seasonal-affected souls, as gray days only look grayer when there’s no white to cling to the tree limbs, and there really isn’t anything to talk about.

Some like to rectify this by jetting to warmer climes – beaches, golf courses, a sun with real heat.

I decided to do some real "wintering" and headed to the Wisconsin Dells and Christmas Mountain Village for some snow sports.

While belly-sliding down parts of my alley could be fun, I figured jumping into an inner tube and barreling down a hill would be a far better use of what snow there is on the ground.

This was a new adventure for me, as I’m not typically a "snow sport" kind of person – but why not embrace the Wisconsin name on my driver’s license.

Get your gear to hit the slopes.

I went up with my wife for two days and a night, and we stayed in one of the lovely townhouses on the campus, which was a short walk (in the summer) from the golf course, pro shop and Mulligan’s restaurant.

The space was cozy, and an electric fireplace. It was outfitted for a couple that may be staying for a week or so, with a kitchen that included a dishwasher and refrigerator.

We were there for the outdoor fun, however, and the feel of the townhouse lent itself to that mindset in that it was as a place to eat, relax a bit, clean up and sleep. I don’t think we turned on either of the televisions, actually. 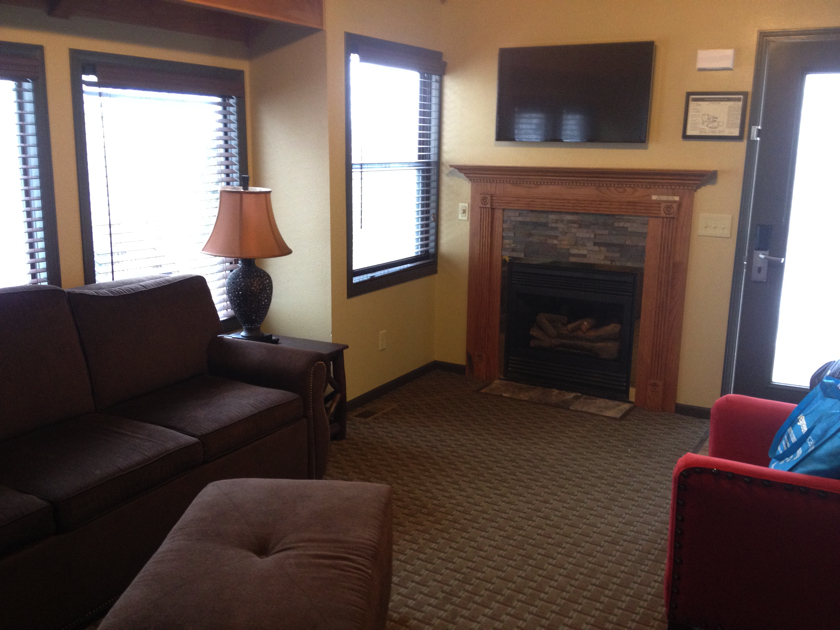 It’s sort of like the Dells water parks we all know and love, in that you’re dragging your tube around with you and waiting in line for a "slide" to open but, but it was, frankly, exhilarating.

We booked a 2-hour ticket, which sounds ridiculous for just one activity, but actually the time flew by.

Three of the lanes were standard, just straight down the hill, and a fifth included some mounding that fired you up and down and around at a tremendous amount of speed.

You lose all your bearings, really, going down any of them, until you level out at the bottom. And the lanes are built for multiple riders – we saw families of four to six tie their tubes together and barrel down, the screams of joy (and terror?) echoing over the ski hills. 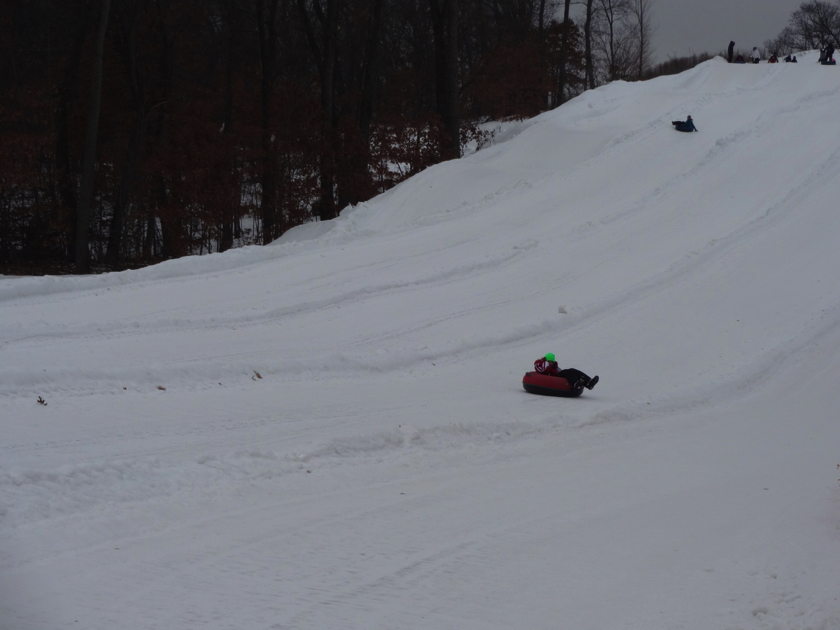 The clubhouse area featured a nice indoor pool, though we didn’t stay there much since there were quite a few families and kids, instead electing for the adults-only sauna. There was also an outdoor hot tub, which was a popular choice for many as well.

Our second day was to be devoted to getting me up on some skis, which was no small feat. I’ve had three major knee surgeries, and frankly I like to avoid all unnecessary risks regarding my health (and my summer golf game).

But, it was time to try something new, so we booked an adult group lesson ($79), which includes a full-day lift ticket and all of your rentals, with Fransisca, a Chilean 20-something who told us she mountain skies in her home country, so everything at Christmas Mountain was a bunny hill.

We gave it a shot, moving a quarter of the way up the beginner’s hill, or Nob Hill. It eventually crowded, with children and other novices, but it was big enough for people to fall safely, or stop in time before taking out people’s legs at the bottom.

Fransisca was charming, if not loquacious, and she was helpful in getting us going. I’ll be honest – I couldn’t finish the entire one hour lesson, both out of nervousness at skiing at any real rate of speed down any real sort of incline, and out of leg exhaustion – I haven’t worked some of those muscles, even in my many rehab stints, and was sore for a day or two. But, I can at least say I "skied" … in a technical sense.

I don’t have children, but I can appreciate the way the instructors there handled the groups of kids ($69 group rate) they were in charge of. Nothing can be more daunting then trying to communicate, to multiple children, how to work their legs to turn and stop on skis.

Now, since were just learning how to ski, there was no way I could truly experience the proper ski and snowboard hills, ranging from the beginner "Hee Haw" ski hill to the black diamond "Blackburn."

Even as a spectator, what I appreciated about this was A) the family atmosphere on all the runs and B) the willingness of everyone to help each other, if it be on a fall, or a runaway board, or even helping someone pull off a ski boot for the first time.

Stay warm and cozy in these!

The only events we could not participate in were snowshoeing and cross country skiing (though the facility does not rent those specific type of skis). If need be, Christmas Mountain can make its own snow, but six to eight inches of real fluff is needed to trek around the trails the top of the "mountain."

On our way to Christmas Mountain I was worried about how many of the activities we’d be able to enjoy with fall browns dominating the landscape as opposed to winter whites. It was nice to see the snow covered hills at Christmas Mountain, and I found it to be an affordable, fun experience.

I’d say Christmas Mountain definitely caters to the family outing, but even two adults who want to learn a new winter sport and spend time together enjoying it can do so without finding strange children too annoying. The staff was courteous, helpful, and above all, patient, which was important.

The snow may or may not stay (or come back) here in Milwaukee, but it was nice to "get away" just up and around 94 and enjoy some real winter activity.