I went to ComedySportz with a friend for a Friday night performance. I was surprised how much the show relied on audience involvement.

Imagine this: two people sitting on chairs on stage, one person saying "welcome to our channel" and "I know nothing about tectonic plates, so I have my uncle here to explain them" and the other forcing his hands against each other to try to explain tectonic plates while saying "I really don’t know much about them either."

At ComedySportz, the people on stage, or players, are constantly put on the spot and forced to think on their feet. Even when they might not know much about the topic.

I went to ComedySportz with a friend for a Friday night performance at 7:30 p.m. I was surprised how much the show relied on audience involvement. I would say 80 percent of the show relied on the audience giving answers to questions the referee asked.

The players were split into two teams: the red team (aka the sparklers) and the blue team (aka the dendrites). I don’t know how they chose the team names to be a firework versus a part of a nerve cell, but it for sure made it interesting whenever the referee called out the names. They competed against each other, playing multiple improv games, and the team that got the most audience approval (by applause and hollering) determined the winner. So, comedy is literally a sport.

A nice bonus about ComedySportz is that food is available and is actually encouraged to be a part of your experience. When I arrived in the arena, I noticed the seats were split up Medieval Times-like, with color coded sections and long tables spanning across every seat. Wait staff came around, attending to your needs. I ordered a chicken quesadilla, which that and the tortilla chips that came with it were very tasty. 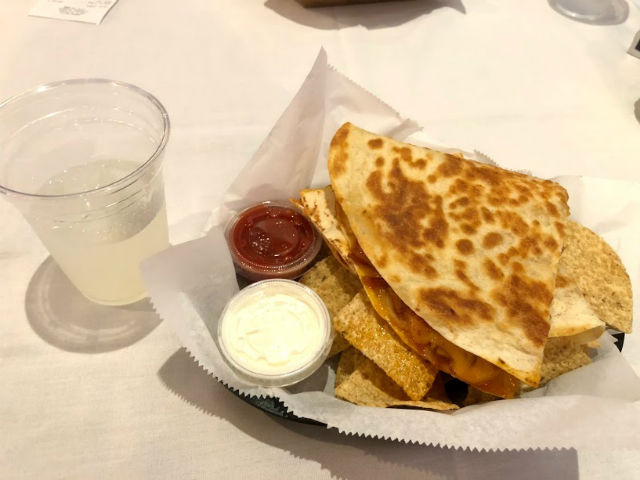 It was impressive how quickly the players thought of content to match what was said by the audience. They work their skits around what was said. I also was not aware how many improv comedy games were out there. Two twin children, celebrating their birthdays together, went on stage as volunteers. The players thought of the "moving bodies" game where the twins had to touch the players in order to allow the players to move. Otherwise the players were frozen stiff. This game was not only kid-friendly because the kids got to play make-believe on the setting of a "spaceship," but also it was highly adorable because who doesn’t love watching two youngins bumble around on stage? And the players made sure to keep everything G-rated throughout that skit and the entirety of the show. 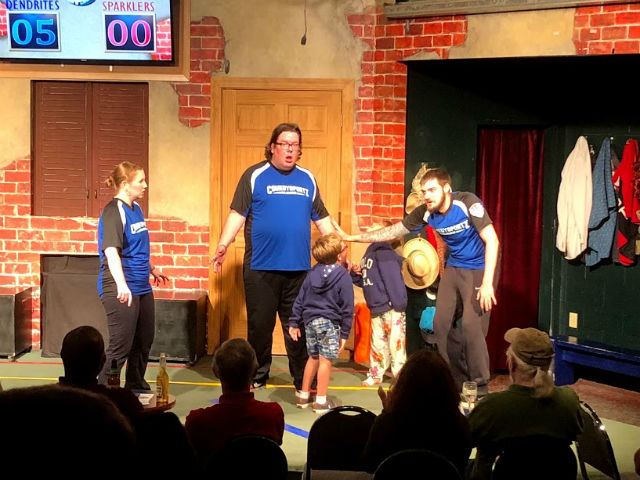 There really wasn’t a game where I didn’t laugh, or even just slightly chuckle, at least once. My favorite game was when all of the players were on stage with their backs turned. Two players were up front, facing the audience, acting out a scene. They would switch out with players who hadn’t been watching the scene, and the new players would have to get back in the position the previous players were in and come up with a new scene out of context. So, scenes went from a male masseuse giving his client a massage so intense that he was literally on top of the client, to Dora and her talking backpack, to two female cheerleaders hanging onto each other in a perpendicular pose. It was funny to see the players try to reenact what the previous players left the scene in, because some players were more or less heavy, and more or less flexible than others.

One of the less exciting games featured the players talking about a topic given by the audience, and any player could interject and challenge something the player was saying. In this case, the topic was clipping toenails. That topic does not give a lot of space for conversation, and the players naturally drove off course, talking about mouths and eating and trying to weave back to toenail clipping. The conversation would back up at what they were originally discussing, and so the whole thing felt circular, which got a little boring. However, this game, while it did not stand out as particularly hilarious, did not take away from my experience and I still thought it was a rollicking good time overall.

I would go back to ComedySportz, maybe for a midnight show on a Saturday when I’m already out and about. The midnight shows are rated R, so it would be interesting to see what type of topics the players cover and how different those shows are compared to the all ages shows of the earlier hours in the day and evening.