Just before Dierks Bentley took the stage, it began to rain - again. Never a full torrential downpour, but a decently steady rain. But in absolutely no way did it dampen anyone's spirits. And Bentley embraced it and didn't give in to it.

Shortly before I shut down Thursday night, everything went quiet on the Country Thunder festival grounds. Lightning was shooting across the sky like nothing I’ve ever seen before. It was, in a word, scary.

Tragically, a young woman on her phone outside one the campgrounds was struck by that lightning sometime around 12:30 a.m. Friday morning. All concert activities, the food court and marketplace had been shut down by that point, and attendees had been told to take shelter. I didn’t know this until I got onto the grounds Friday morning, but one could definitely sense a somber feeling.

Kicking off the music on Friday, country crooner and long-time recording artist Harry Luge took the stage. Filled with energy, original songs, some covers and a lot of personality shining through, he probably could have played longer. He was a definite treat.

Next up, the female vocal trio fan favorite Runaway June. This group is just so, so cool – and it was nice to hear some female voices take the main stage for the first time, three women with powerful, beautiful voices singing laid-bare country with harmonies that truly will make you drool.

Runaway June's hour-long set was filled lots of original songs and super popular covers, and while the crowd was small, it was also loud. They performed a super roached out version of Dwight Yoakam’s "Fast as You" that had people up dancing. But honestly, pretty much every song they did that wasn’t slow had people up and moving. This band has an energy that’s just so hard to describe. It might be weird to say, but I’d describe it as contagious. Regardless of how it’s described, the ladies have it. And they were a joy to watch.

The following act, Muscadine Bloodline, a band formed by two musicians from Mobile, Alabama, is unapologetically itself. Which in country, if you aren’t you, you aren’t anything. The band's musical country stylings feature rock country rhythms and throwback-sounding country love ballads. It was good – and it’s likely we’ll see the group back in Wisconsin opening for another act sometime soon.

Ashley McBryde hit the stage with the title track from her debut studio album, "Girl Going Nowhere." It's a really beautiful song about being shot down, put down, told no and pretty much consistently being told your dreams aren't realistic. It's about overcoming the no's. It's about persisting. It's about being told you're going nowhere and winding up where you always wanted to be. McBryde looked visibly moved to be on the Thunder stage. It was a really poignant moment.

Having had the chance to interview her earlier in the day, I was super pumped to catch her set. And after that beginning, I couldn't wait for the rest. She didn't disappoint. Playing mostly original songs, she kept the crowd going with her breath of fresh air, bluesy rock country, including songs like "El Dorado," "Radioland" and the song that put her on the map, "Little Dive Bar in Dahlonega." She was truly great.

A slight delay was well worth it when Brothers Osborne lit up the stage, flying in with "Shoot Me Straight." Right off the bat, Brothers Osborne established that their set wasn’t going to be straight plays of their songs. Nearly every song they played had some twist. Whether it was an extended play with an amazing guitar solo by John Osborne, or a full band interlude, or just some bumped up harmonies, it was hands down just a skillfully crafted set.

The whole set had a vibe of, I guess you could say, thankfulness and joy. T.J. noted that playing Thunder was a bucket list item for him. He’d first been here awhile ago on the road crew for Phil Vassar, and it had been a dream of T.J.’s to get back here and play one day. They hit a couple new songs, "I Don’t Remember Me (Before You)" and "Weed, Whiskey, Willie" – definitely recommend grabbing them both.

Oddly enough, I think my favorite part of their set was an unexpected cover of the Dixie Chicks hilariously morbid "Goodbye Earl." They did a rocked out booming rendition that made the song brilliantly ruthless.

Brothers Osborne then closed with a super extended play version of "It Ain’t My Fault" and the crowd pretty much went bananas.

Just before Dierks Bentley took the stage it began to rain ... again. It never turned into a full torrential downpour, but it was a decently steady rain. But I'm here to tell you, in absolutely no way did it dampen anyone’s spirits. If anything, it heightened the experience. And Bentley embraced it and didn't give in to it.

Just a bit after 10 p.m., Bentley blew onto the stage after a quick musical introduction to the Mountain High tour. The cheers were deafening. Opening with "I Hold On," the crowd was dancing even before he started singing. It was awesome.

He drank in the energy and fed off it, rolling into his next two songs, "Free and Easy (Down the Road I Go)" and "Somewhere on a Beach." With the weather turning into a rainy, Wisconsin fall night, Bentley’s video display had me really wishing we were somewhere on a beach. 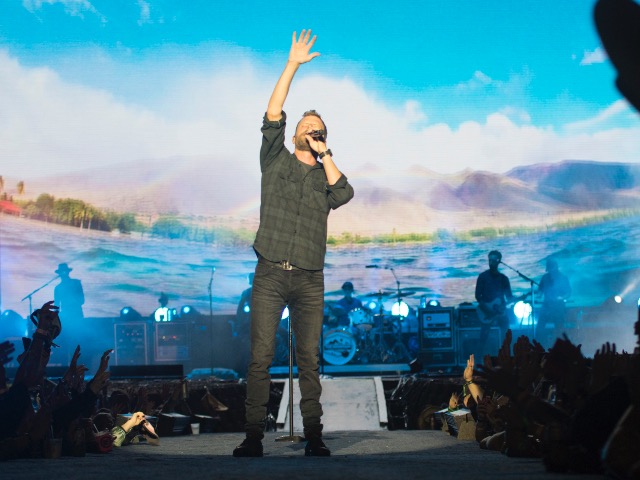 Bentley and his bandmates ripped through the first five songs with very little pause. Then, during "Burning Man," he welcomed Brothers Osborne back to the stage to perform. After "Burning Man," Bentley swung into "Up on the Ridge" – all the while the weather kept getting nastier. The feint of heart started to trickle out, but for the most part, the worse the weather got – wind kicking up, temperature dropping, rain getting heavier – the crazier the crowd got. For my part, I started to hide under my rain poncho, literally becoming a turtle while watching Dierks perform through the window of my poncho. I’ve never felt older and more joyful than I did today.

During a small pause after "Different for Girls," the crowd began to chant, "U.S.A.! U.S.A.!" Bentley responded by saying that the best moment of his day was hearing that chant. We live in such a great country, he said. 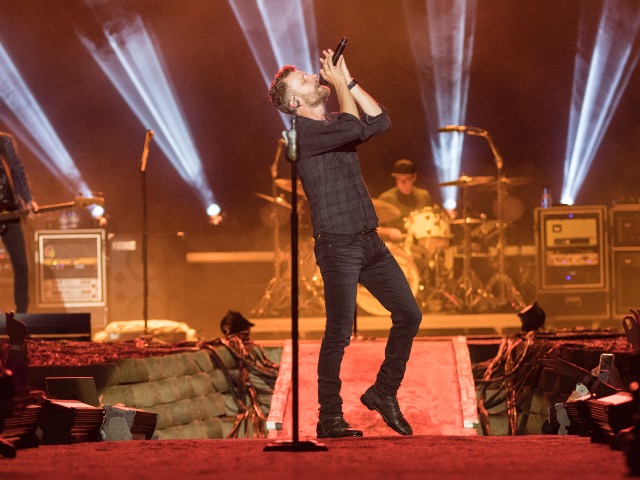 I gotta say that, as crap as the weather was and as chilly as it got, Bentley never wavered in energy or intensity. He was just so, so good. During probably the heaviest part of the rain, Bentley walked out on the catwalk with someone from the audience as a prelude to "Tip It on Back" and they shot-gunned a beer. So very country. So very loved by the crowd.

Bentley closed with "Drunk on a Plane," dressed like an airline pilot and dancing like Magic Mike. It was the perfect end to day two of Country Thunder. 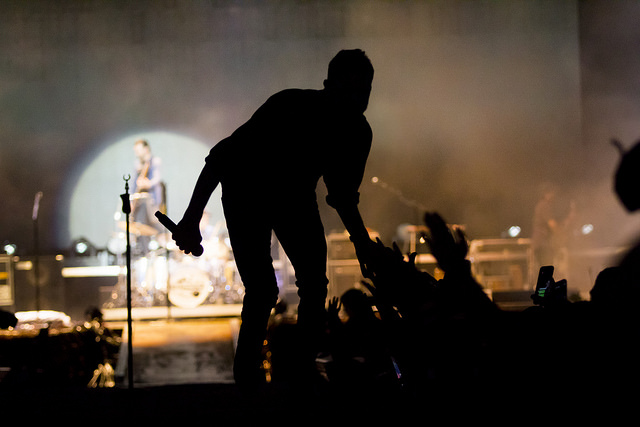