The Oriental Theatre will get hit with a disconnection notice Thursday night - but don't worry, the building will still have plenty of power. If anything, the evening should be more electric than usual.

The Oriental Theatre will get hit with a disconnection notice Thursday night – but don’t worry, the building will still have plenty of power. If anything, the evening should be more electric than usual.

That night, starting at 6:30 p.m., the Oriental will host the world premiere of "Disconnection Notice," a new rom-com shot right here in Milwaukee and starring several comedians from the Milwaukee comedy scene and beyond.

The film follows Mike (played by Chicago comedian Brian "Wildcat" Smith, the winner of the 2015 Shaq’s Next All-Star competition), a layabout guy trying to keep his relationship with his fed-up girlfriend (Milwaukee comedian Kelly "Kellz" Stinnett-Davis) from falling apart. Step one: Getting a job so he can pay off his massive debt to the electric company that’s threatening to cut off his power. Finally kicking his lazy cousin Ricky (fellow local funnyman Myron Jewell) off the couch would also be a step in the right direction.

"I wanted to find something that we could identify with and laugh at – not just a black thing, because I have white friends too," explained screenwriter La Shawn Parks. "So I was thinking and then I looked at the electric bill – the electric company is notorious; they have no heart –  and it said disconnection notice. So that’s how it was kind of born."

While the film’s subject came from the very legitimate threat of losing your power – or, as Smith bluntly and jokingly put it: "Poverty" –­ the actual vibe and feel of "Disconnection Notice" comes from a much lighter, funnier inspiration: "Friday," the iconic Ice Cube/Chris Tucker comedy and Parks’s favorite movie. He, too, wanted to take a real-world slice-of-life situation and fill it with skilled, hilarious comedians. And judging from the film’s credits, he got his wish.

In addition to Smith, Kellz and Jewell, each scene in "Disconnection Notice" packs the frame with funny people from across Milwaukee and the entire Midwest, including Rodney Perry ("Madea’s Big Happy Family"), Manita "Playa Mook" Johnson (four-time Queen of Little Rock Comedy), stand-up comedian Alfred Kainga, Patricia "Ms Pat" Williams ("Last Comic Standing") and many more – all giving and taking jokes and jabs, some from the script and some from the top of their heads. Oh, and some involving Smith suffering through nipple clamps.

"It was a good 70 percent script, 30 percent improv, but that’s the beauty of working with people that understand how to make music," Smith said. "It’s like, ‘Hey, here’s my baby. Feed it, bathe it, but other than that, I can’t tell you exactly what songs to sing.’ It’s good to work with people who give you that flexibility so you can make it your own.

"It was dope. There were times when we said cut, and the room just blew up."

"I had a lot of jokes and stuff, but it was hard working with [Smith]," Jewell joked. "I thought I was witty, but we’d be doing scenes and if we shot it five times, he said five different things that always caught you off guard. It was hard for me to stay in character at times. He was saying stuff where it’s, like, who thinks of that?" 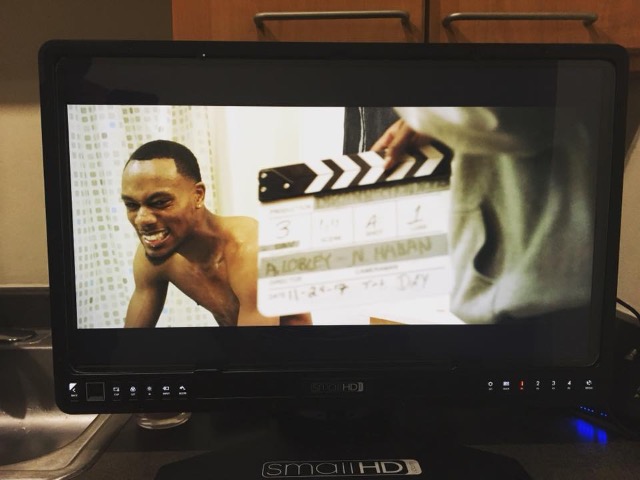 They’d need that extra jolt of comedic energy to stay warm during the film’s shoot throughout a frigid Milwaukee winter, beginning in mid-November and going all the way into February.

"Snow was not supposed to be a part of this movie," laughed director Rubin Whitmore II, credited under the moniker Ali Rosenthal III. "No matter how we plan it, we end up shooting in the middle of winter."

"I tried to keep a jacket on and got long johns; Rubin would say, ‘For this scene, we need versatility,’ and I’m like, ‘Well, then give me another jacket,’" Smith joked. "I caught a couple of colds filming this movie, but watching the trailer, I’m really excited. Each day, when it was over, it was like, ‘Now I know why we do this, why I’m standing out here in the cold in a jacket.’" 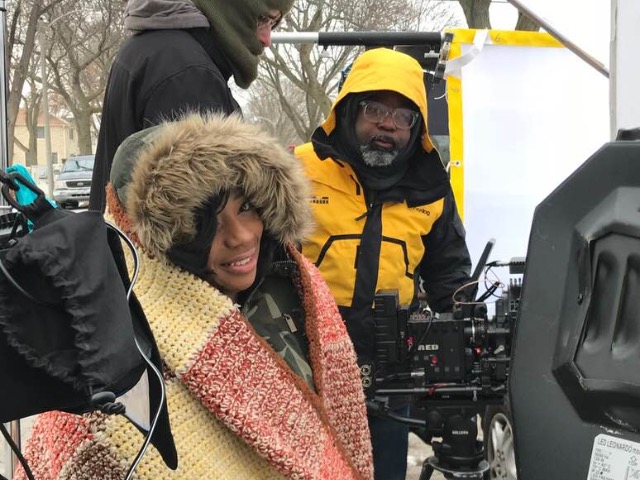 Battling the weather is worth it, too, for Whitmore. With "Disconnection Notice," the director has now shot five feature films in his native Milwaukee (his previous effort, "Life of the Party," was a Milwaukee Film Festival selection last year) showcasing the city beyond its typical postcard landmarks – and showing no sign of stopping production here, even with the snow.

"It’s genuinely a community that wants to see itself in these [filmmaking] positions, and that’s what they rally behind. Because a lot of times you don’t believe or know that you can do something because you don’t have examples to say, ‘This is possible.’ So part of the goal is just to prove it’s possible. And that’s something that we’re very cognizant of when we make these movies."