Oscar-winning filmmaker and Milwaukee native John Ridley ("12 Years a Slave," "American Crime") today announced the creation of No Studios, a hub for the creative arts in downtown Milwaukee.

No is the opposite of creation. No is termination, rejection, to strike something down and eliminate it from existing. Even the word itself lands with a thud, a small but powerful verbal brick wall.

It's a word Milwaukee native John Ridley has likely heard a lot as an artist constantly climbing Hollywood's notoriously slippery ladder in the process of becoming an Oscar-winning screenwriter ("12 Years a Slave"), director and producer. He's certainly no stranger to hearing no while also trying to sell his idea for a Milwaukee creative hub to businesspeople over the past three to four years, a theater space at a time when theater attendance is declining. It wasn't until he had a text conversation with County Executive Chris Abele and pitched him his idea that he heard the word's life-giving magical inverse: yes.

"Yes is something we just don't hear enough in our lives," preached Ridley to a room full of media members and local leaders at The Brewhouse Inn on Tuesday afternoon. That makes the name of his new Milwaukee creative hub, opening in a 40,000-square foot building at 1037 W. McKinley Ave. in the Pabst Brewery Complex this September, all the more surprising: No Studios.

As an East Asian Languages and Culture major in college, Ridley explained that "no" is actually the Japanese root word for art, skill and talent. But its English meaning also carries into the name of Ridley's new social space.

"No is a word that all of us hear too much in life – and I think art in particular is forged against the word 'no,'" Ridley explained. "No, no, no – and then finally saying I don't care what other people say, I don't what other people think; we can accomplish. So to build a space that, for everyone that is involved, ironically is trying to flip that word and try to make it not a negative anymore but a positive is something very important to what we do." 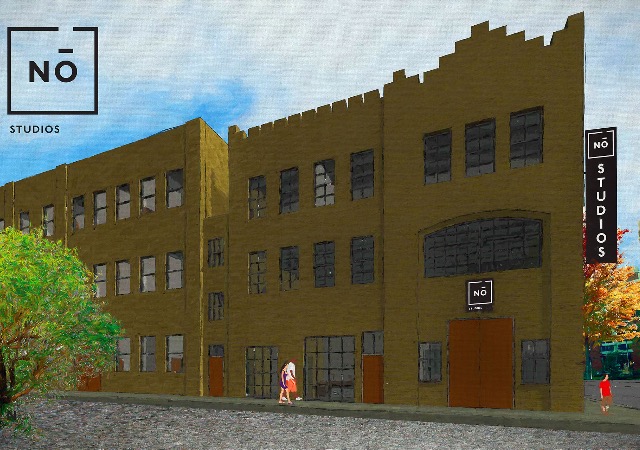 Negative into positive is a key part of No Studios, a new space where Ridley and his business partner Abele, hope artists can "socialize with purpose" in a building dedicated to creating, curating and presenting art in the city of Milwaukee.

The structure will feature long-term and short-term office space for local individuals, organizations and companies – a list of tenants already including Milwaukee Film, the newly formed Milwaukee Filmmaker Alliance, 371 Productions, UWM School of Film, Marquette University and more – as well as a 50-seat screening room, galleries, a rooftop event space and food and beverage to help literally feed the creative minds hard at work and those coming to enjoy the programs emerging from inside its buzzing walls.

The goal, according to Ridley, is to create a space to bring talented creatives, thoughtful patrons and diverse communities together – from across the city and hopefully across the nation – collaborating and conversing over art and learning more about the world through it.

Contrary to its stark name, No Studios will be a definition-less space, one filled by the creative minds working and mingling inside of it. One thing it is not, Ridley made clear, is a non-profit, a purposeful decision on his part.

"We are for-profit because we do not want to try to intrude on the space of all the non-profits who are writing grants, who are looking for funds, who are doing such good work and who are embedded here," Ridley explained. "We really want to, in the best sense, get the patrons of the art, people who love art, people who are excited by the hub and the amenities we're going to offer and bring them in to support those artists and those individuals."

Ridley also explained the goal of No Studios is not to "bring Hollywood to the lakefront."

"We're not trying to compete with Los Angeles or Atlanta or other places where there's a lot of production going on," he said. "If we can at some point, that would be terrific. But that is a large effort. That is an effort from citizens to government – and we hope that we can be a part of that – but what we know we can do is create a conduit, so we can identify individuals here in Milwaukee of talent, of ability, of self-regard, and help those individuals find people on the East Coast or the West Coast or wherever who can support their craft."

It's a realistic goal for a Milwaukee film scene constantly growing and on the cusp of exploding even more into a player in the pop culture world (the Milwaukee Film Festival's slight move later will have it playing more for high-profile features, while the Milwaukee Filmmaker Alliance already reported last year that the city's film industry has surpassed its beer industry). But it's also a mission beyond growing an industry and making thrilling, thought-provoking art. For Ridley, it's about filling a space in a city growing in many ways – and helping fill the spaces notoriously dividing Milwaukee, the place he called home and that many of his family members still do. (His mother and father were in attendance at Tuesday's media gathering, while his sister, a fellow significant player in bringing No Studios to life, helped introduce him.)

"The concept that we want to do – building a space where people can come together, where they can take their different interests, their different disciplines, their different backgrounds, and cross-pollinate and create something that goes beyond the borders of this city, this state and even this country – while that idea in New York, in Los Angeles, in Austin, in Chicago, is not that revolutionary, in Milwaukee it is," Ridley said. "But the great thing about that is that it's a space where we can convert on that idea and on that perspective.

The hub is expected to open this September with a weekend of events shining a spotlight on the space's multi-use functions and possibilities. And after that, expect to hear "No" much more often – in a good way.