Erin Salerno is a passionate cake maker who overcame an injury on the job. "I've made people smile through sugar for eight years," she says. 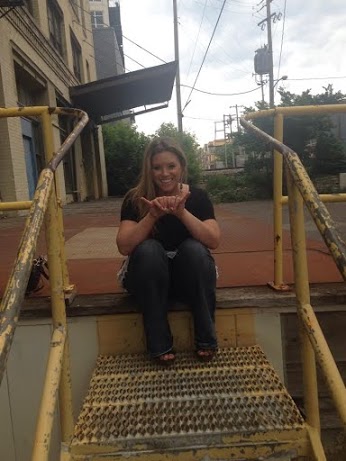 Erin Salerno says she’s made people smile through sugar for eight years. As a passionate cake maker and the owner of Cakes By Erin Salerno, she has positively contributed to many couples’ wedding days and other special occasions.

Salerno started cake designing seven years ago after getting inspired by "Ace of Cakes" on television. She started as an intern at Elizabeth’s Cakes and within two days became a regular employee. She became respected and celebrated in the industry through her work with the Iron Cupcake Competition and created a signature 3D style of cake decoration.

Salerno has also overcome a physical hardship. In 2010, Salerno got her hand caught in an old industrial dough sheeter at work and suffered three broken fingers and two shattered fingertips. Even with surgery, she lost functionality in a portion of her index finger, and limited movement of the others.

"Since my hand injury in 2010 that's left me with permanent damage and loss of function in my fingers, I've felt that I lost some of that magic. Right before the accident, I felt like I hit my stride. But, afterward, my confidence was shaken to the core," Salerno told OnMilwaukee.com’s Lori Fredrich in 2012.

But Salerno persisted and has gone on to create edible masterpieces and memories by the masses for multitudes of Milwaukeeans.

OnMilwaukee.com: How long have you lived here?

Erin Salerno: My husband has been proudly serving the Milwaukee Fire Department for 28 years, so we've been here a while.

ES: I’m a warm weather girl! Give me sunshine, blue skies and blooming flowers, and I'm a happy girl. I really love the summers in Milwaukee, because there's so much to see and do.

ES: Funnel cake. No seriously … any fair, festival, or even the zoo, that's where you'll find me. In my best Homer Simpson voice: Hmmmmm … funnel cake!

OMC: What’s your hope for Milwaukee?

ES: My hope for Milwaukee is more perspective. Sometimes we get caught up in the mindless everyday hustle. We all have a story, a light, a struggle, a passion, a fear. My hope is that more people are able to step back and accept each other for their differences, their thoughts, their beliefs. We are all unique, and that's what makes us a gift. It doesn't matter what gender, religion, race, ethnicity, political belief or sexual orientation you are. Everyone has something to share, to enlighten, to teach – it’s all in your perspective.

OMC: When and how did you fall in love with Milwaukee?

ES: I’ve lived in Wisconsin my whole life, and moved to Downtown Milwaukee shortly after college. I lived near Knapp and Prospect. My apartment building had the most amazing rooftop deck. You could see for miles in every direction, and could walk to Summerfest, or better yet sit right on my bed and watch the fireworks. It was truly incredible. I would have to say that my love for Milwaukee came then, and it just kept growing when I met my husband, and truly came full circle when I started doing wedding cakes.

I'm so privileged to be able to work with so many talented and inspiring people. Every couple has such a journey and it's a blessing to be a small part of it. Plus I get to see so many extraordinary venues. The history of Milwaukee, its people and its love, are defined in so many of the great places it offers.

OMC: What neighborhood do you live in?

ES: My husband, two children and I live in the Florist Highlands neighborhood on the Northwest side.

OMC: What’s one of your guilty pleasures?

ES: Did I mention funnel cake? Let's go ahead and throw in a Bomber Burger from AJ Bombers, and fried everything at Palomino. #fatgirlprobz

OMC: If you could high five one Milwaukeean, who would it be?

ES: I'd like to throw out a few high fives, starting with Angela and Greg Quigley. As owners of Married in Milwaukee, they share information about all the Milwaukee vendors for weddings. It's such an asset for brides and grooms, and also gives the vendors a great community within. We get to know each other, support each other, and grow our business together. They are also part of their neighborhood association, and have been very instrumental in the expansion and growth happening in the East Tosa area. Good people, great things!

The other major high five actually comes with a hug for Emma Pulson. She's a recent cancer survivor that I met through a charity that makes cakes for children with intense, aggressive or life threatening illnesses. Emma took her experiences and started her own charity called Patients Helping Patients. Every month she hand delivers care packages full of toys, gift card, games, etc. to the oncology, hematology, and transplant unit at Children's Hospital. Emma is the most poised, heartfelt, special young woman I've ever met. She's also decided to become a pediatric cancer nurse to help other children through what she went through. There aren't enough words to describe how amazing Emma is.