If you've been outside the U.S. you know that despite whatever the NFL might say, finding someone with an even passing interest in American football isn't always easy. That is, unless you go to Italy and bump into Fausto Batella, who has a new book out.

If you’ve been outside the U.S. you know that despite whatever the NFL might say, finding someone with an even passing interest in American football isn’t always easy. That is, unless you go to Italy and bump into Fausto Batella.

Though he’s a soccer fan, like pretty much everyone there, Batella is especially passionate about professional American football.

He’s played the game in Italy’s leagues – so has a cousin of mine! – and he’s written a number of books about the sport, in Italian and, now, in English. A couple years back, we told you about his Vince Lombardi book. 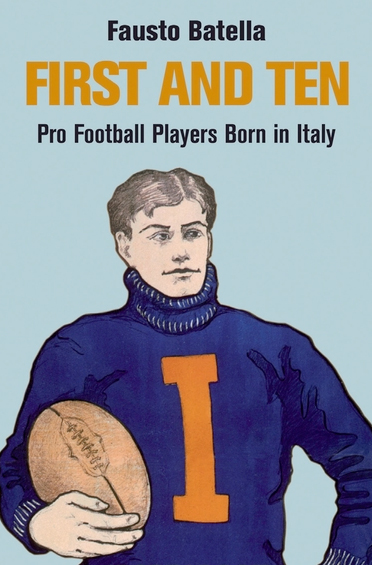 His new book is called "First and Ten: Pro Football Players Born in Italy." The book – the title of which is pretty self-explanatory – looks at players like Peter Gorgone, Leo Nomellini, Ralph Vince, Dom Cara, Joe Savoldi and others, who were born in the boot and went on to play in the NFL.

We asked Batella about the book via email and here’s what he had to say.

OnMilwaukee: Tell us a bit about American football in Italy.

Fausto Batella: The first real American football game played in Italy took place in Florence on Jan. 1, 1945 in front of an audience of 25,000 people; it was the "Spaghetti Bowl" played by two USA military teams representing the Army and the Air Force. An isolated case.

Football was heard from again in 1973 with the establishment of the Roman Gladiators team as part of a project of the Bob Kap’s International Football League. That dream soon vanished. Finally, the construction in 1980 of the Vince Lombardi Stadium in an Umbrian town started a regular activity that spread to the rest of the country – Milan, Turin, Bologna, Ferrara – and is still ongoing.

Would you say it’s getting more and more popular among Italians or that it’s more or less the same?

It’s the same situation as in 2015 when you wrote about "Il Vincente" ("The Winner"), my book about Vince Lombardi. In Italy football is a minor sport with about 100 amateur teams and fewer than 10,000 players. The major league, IFL, organizes an elite tournament with the participation USA players with experience in football college. In Italy soccer is too popular and intrusive on the media.

The only positive note: in Castel Giorgio (Terni) the Vince Lombardi Stadium reopened in July 2016 after 31 years and in the city hall the museum of American football in Italy (MUFA) has been inaugurated. I am proud to be the author of some of the texts of the various information boards.

How did you discover football?

The Vince Lombardi Stadium was built a few miles from my house and I started to play there in the early 1980s as defensive tackle. In 1983 I started to write about football while following the first European championships for a daily newspaper. Even today I split my time between financial journalism and the new book dedicated to football and Italian Americans, also available as an ebook (via leasingtime.it and sportbook.it). 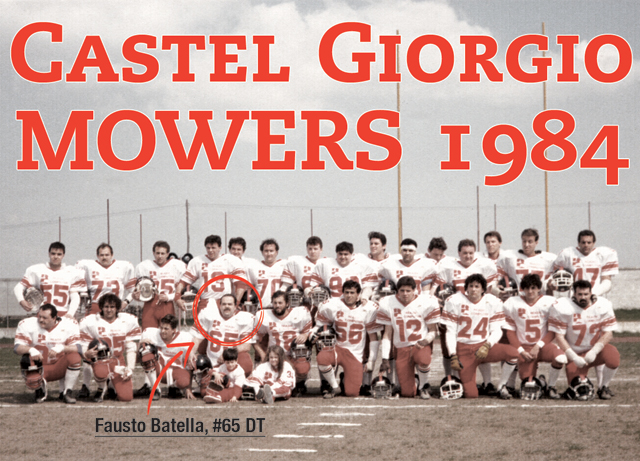 Football is a rough sport but loyal and with lots of strategy; definitely character building. It teaches teamwork and respect for the opponent, develops courage and quickness of thought and requires dedicated practice.

Do you root also for a soccer team?

My favorite sport is football, but as a good Italian I also follow soccer and I root for A.S. Roma.

Do you have a favorite American team?

I root for NFL Green Bay Packers thanks to Vince Lombardi and I watch their games on the web or satellite TV. In addition, I own a well-stocked library with books and videos. In the 1980s I bought many books from a New Jersey company.

You have written many books about American football suggesting that there is an audience in Italy for this subject. Is it true or do you mostly write for English speakers?

In Italy the books devoted to football will never become best sellers, but there is a hardcore group of passionate and faithful readers, willing to learn about the past of this sport. I am a member of PFRA-Professional Football Researchers Association since 1985 which was founded by Bob Carroll and since 1998 I have started publishing books in English, too.

Tell us about this new book.

"First and Ten: Pro Football Players Born in Italy" narrates the stories of boys born in Italy who emigrated to America with their families, from the early 1900s till the 1980s looking for a better life. Different stories, some played only a few games in NFL – in 1926 the Hartford Blues roster listed three players born in Italy! – but as pioneers among pioneers of pro football USA.

Others – such as Bruno Banducci and Leo Nomellini – were on 1940s NFL All-Pro Teams and are in the Pro Football Hall of Fame. Small, great stories of sacrifice and determination that I would like to share with Italian-Americans, who are inundated by books about the mafia and cuisine.

Where can Americans buy the book?

Online bookstores such as Amazon.com, barnesandnoble.com and alibris.com. Traditional bookstores and libraries may order it directly through their dedicated platform on createspace.com.

My grandson won the Super Bowl. Now what do his parents do?