When it comes to Wisconsin football, it's usually all about the Packers and the Badgers. But there's a team in this city that plays a different kind of football. It's the Bombers, Milwaukee's official Australian rules football team.

When it comes to Wisconsin football, it’s usually all about the Packers and the Badgers. But there’s a team in this city that plays a different kind of football.

"I tell people it’s kind of like rugby but with a little bit of finesse, and people who play rugby are like, ‘What the heck are you talking about?’" said Bombers player Cory Malchow.

Not familiar with Australian rules football? Malchow explains it by referencing some more familiar sports.

"It’s multiple combinations of sports combined together," Malchow said. "You’ve got basketball, football, soccer, a little rugby in there, all combined together. It’s a great sport to play for any type of athlete."

"It’s a weird game, but it’s really fun," Riggall said. "Anyone can get into it. There’s just a couple of things you need: a pair of cleats, a good attitude and a willingness to learn. Anyone can enjoy the game."

Riggall grew up in Australia, where the game is widely popular.

"Australian rules football as a kid is kind of like American football or baseball for an American kid," Riggall said. "It’s sort of something you grow up with and everyone plays it, so you want to be a part of it." 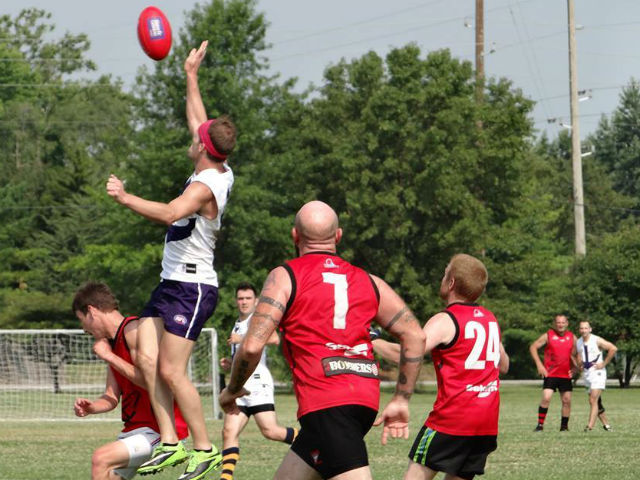 The Milwaukee Bombers are part of the USAFL, or the United States Australian Football League. They play against other teams from the Midwest and even from around the country.

"We go down to Chicago, we had one of the guys here who’s headed to Chicago right now for a metro game, " says Malchow. "We’ve gone up to Minnesota, we’ve done New York, New York."

But getting enough people to field a team is always a struggle, something that Riggall freely acknowledges.

"When I arrived in Milwaukee, the numbers were a little bit down, so now I’m sort of starting from scratch again, getting the word out, build up the numbers and the interest in the sport," Riggall said.

It’s possible that unfamiliarity with the game has something to do with it.

"We’ll just do a little three-man weave, just to get some run into our legs," Riggall said as he reached for some cones to set up the drill.

"I like that you use those words like they mean something to us," one of the Bombers said, which drew a chuckle from one of his teammates.

Yes, Australian football is different from American football, right down to the most fundamental part of the game: the ball itself. The official game ball for Australian rules football looks similar to its American counterpart, but it has rounded edges. This makes it more aerodynamic and easier to kick. 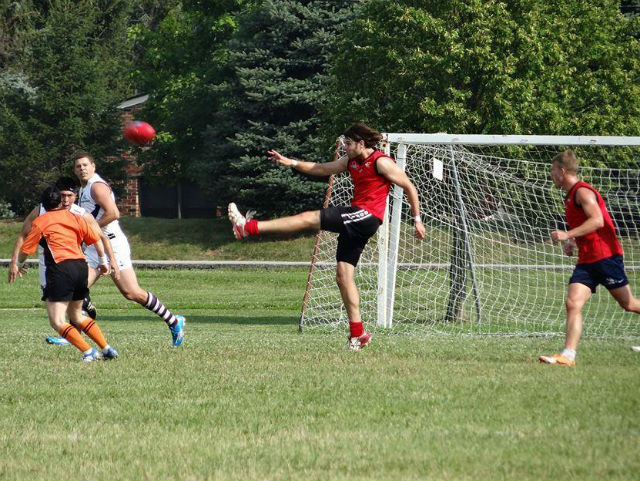 Competition is certainly part of the experience for the Bombers, but having a good time remains the first priority.

"We’re coming together for the greater good and enjoying the game," Riggall said. "It’s not so much about wins or losses in our division."

"This is a social thing for me," Malchow said. "I love talking to people, I love meeting new people. I like going out on adventures – new cities, new towns, road trips. This is a fun time."

The USAFL has 36 clubs spread across the country. The league holds a national tournament in the fall, and the Bombers have won that tournament three times since the club was founded in 1998. They will compete in the 2016 season, with their opponents to be determined.

The Bombers train on Saturday mornings at 10 a.m. at McKinley Marina along the lakefront and will take anyone who shows up and wants to join the team, regardless of experience.

Andrew Goldstein is a journalism major and digital media minor at Marquette University.

Know of other off-the-beaten-path sports stories like this one, let us know!

My grandson won the Super Bowl. Now what do his parents do?