We talked to Dean Cannestra, president of the Italian Community Center - for which Festa is an annual fundraiser - and chair of Festa Italiana, about this year's event, running July 21-23, and about the traditions of Festa Italiana in Milwaukee.

Launched in 1978, Festa Italiana is Milwaukee’s oldest ethnic festival on the Summerfest grounds, the one that spurred them all.

The event was a recreation and a re-evocation of the Italian street festivals and processions that once took place on the streets of the Third Ward, before urban renewal erased the Italian community there in the 1950s.

Since 1978, Festa has remained one of the most popular of the links in the City of Festivals chain that it helped create, changing enough to keep it interesting, while maintaining traditions that have made it beloved.

We talked to Dean Cannestra, president of the Italian Community Center – for which Festa is an annual fundraiser – and chair of Festa Italiana, about this year’s event, running July 21-23, and about the traditions of Festa Italiana in Milwaukee. 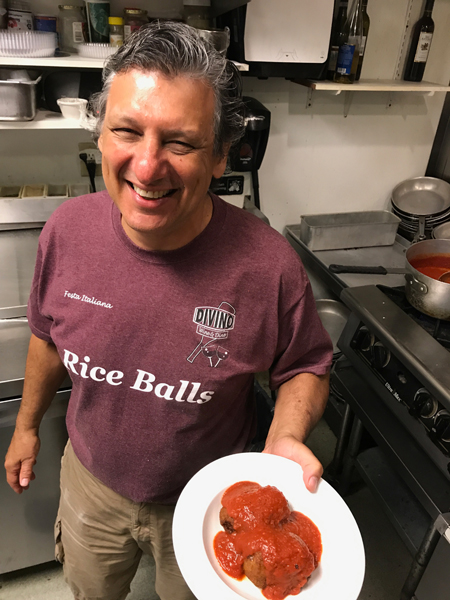 Cannestra is also co-owner of DiVino Wine and Dine, 2315 N. Murray Ave., on the East Side, and had just finished an exhausting run selling arancine (Sicilian meat- or spinach-filled rice balls) at Summerfest.

OnMilwaukee: After a big Summerfest are you ready for Festa this year?

Being on the grounds for Summerfest this year, I got a good chance to take a look at the new layout, particularly the Miller area. It's really nice and I think we're real fortunate, because I think it's going to fit well because they made some good changes on there utilizing the new Miller area.

The historical photos and religious art exhibits will be there, right?

Mm-hmm. You know, the Pompeii church and photo heritage exhibits had always been on the outskirts, way far south where the BMO is. Or if not, far north where the carnival is. Now we're using the Summerfest store for that, so it's going to be centrally located.

You don't have to worry about weather!

And it's air conditioned. It's totally enclosed so it's a perfect thing. I think a lot of people come down to Festa and they miss that exhibit.

That to me is one of the neatest things now about the Miller area. We're able to put something that's so important to us, that represents really what Festa's all about, the religious aspect of it all, which is the history of the festival. Plus, all the photos. The exhibit of the photos from the weddings, you know, the military. All the people from 100 years ago. Our grandparents. All those great pictures of them.

You guys are doing a tribute sort of to Mario Carini (who collected the photos and curated and organized these exhibits until his death just before Festa 2015), aren't you?

Well, we've always done a little tribute to Mario. There's always a little memorial to what he's done and what he's contributed over the years. Another tribute we have going on is to Dick Contino, because he passed away this year.

Anything we can do about it? (Laughs)

Well, I mean, are there ways to plan how you don't let it destroy the festival?

Yeah. How would you? We've been really kind of unfortunate the last couple years, but looking at the forecast, as long as there's no high heat indexes ahead of us ... because that kills it. When people hear "don't leave your home, because it’s high heat," especially when you're 80 years old, you're not going to leave home.

You can survive the storms, but you can't survive the heat. Look at Summerfest. Case in point there this year. It rained out a couple of days. It rained during the days. We still had some fantastic business even on some of those rainy days.

What else is new this year at Festa?

The location certainly is real important for us. I think what's really going to be new for us is just going to be our emphasis on music. It's going to be a good party. There’s going to be music for everyone, really.

If you notice, we've got the BoDeans playing on Friday. The Gin Blossoms on Saturday. We've got an ‘80s revival with a little Heart tribute band, the Dog 'N' Butterfly. We have this really cool all-female acoustic violin group call the Violin Femmes. We’ve got Nicholas David from "The Voice."

How do you balance change versus tradition?

You know that a lot of the things that are important to the community center are certainly the heritage and the culture, which we emphasize certainly with the photo exhibit ... the mass is certainly important. The cucina is great. Bocce, the gondolas. All those things represent Italy and a tribute to Italy.

What we have to remember is that this is a fundraiser. It has to make money. This year, we're really making sure that we put our ducks in that row. It's been tough the last couple years. Certainly, the weather hasn't helped us any, but our emphasis has to be on making this something that's attractive to people.

Well that's an interesting discussion because you look at Festa, but also the other ethnic festivals in the summer, and you have some people who say "oh, I don't go to them that often because they never change," but then you have other people who say "they're not like the old days."

Yeah. You know you're so right about that. Everybody has got their own version of what it should be. Now, we're never going to make it like it used to be but we're just trying hard to make it something that is good for everybody.

I think it's like some kind of illusion of some sort. You make them think that there's change but it's really not changed.

Certainly the mass and procession is a long-standing tradition. 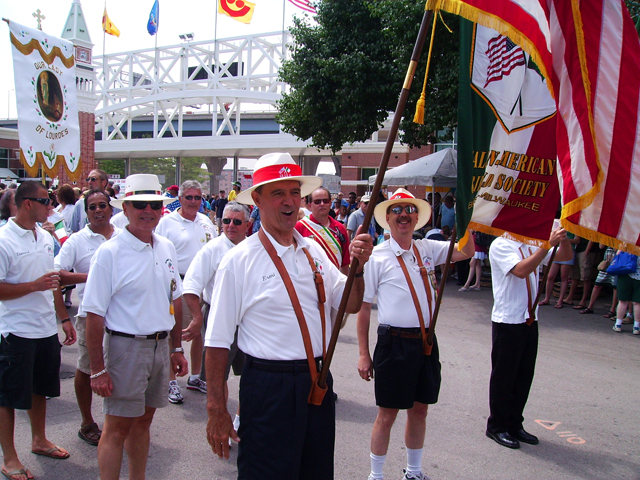 Over there, and all the other towns surrounding it, they have their religious processions, so it is pretty cool, and I'll tell you, that mass group is just fantastic. You know, they're religious about how they get it together.

For you personally, is there one thing that you look forward to every year at Festa?

Well, you know, I'm really involved in the wine booths. I love the wine booths a lot. We've had kind of a lot of evolution with that and I think you start off with the standard wines, and now we're kind of, you know, we're doing some nicer wines now. We're doing some regional stuff down there. We've got LoDuca expanding their portfolio. We've got Corvina down there now.

Now they’ve got some nice nebbiolos down there. We’ve got valpolicellas. Not only do we sell them by the glass now, we have these little disposable bags. You can buy a bottle of wine. Yeah, it comes in a little disposal pack. You can carry it around the grounds with you and drink at your leisure.

We're doing a lot more beverages and stuff. Now we've got, you know, the limoncello margaritas. I just like seeing more of the Italian beverages down there.

I know there have been changes in the local fireworks scene, but fireworks are so key to Festa. Are they staying the same?

There's a lot of stories, but Jeff Bartolotta will be there shooting off the fireworks for us, as he always has.

You grew up in Milwaukee. You must have a lot of great Festa memories.

I was a young adult when Festa started back in the ‘70s, but we were down there. My mother and my father would go down, they were running dessert booth and, of course, my aunt Betty (Puccio), you know, has been into that from the get-go.

I was down there the first couple years helping my mom roll cannoli. You know, lugging things back and forth, and then a couple years later they privatized all the food booths. My Aunt Betty had Bella Luna pasta, so I ran that for her for many years. I was always involved.

Then after that, we took over the bocce courts from the volunteers about 29 years ago, and then (my niece) Tina's father took that over when I started moving into other areas of the organization.

I know you see a lot of the same people at the ICC all year long, but does it feel a little bit like a family reunion every time you go back?

It is. They love seeing the camaraderie of everybody all around them and the music and kind of the revival of all the bands and the music.

I think that's how it started. That was the greatest thing about Festa. It was a family reunion. People get a chance to see each other. Sometimes, you know, that's it – the only time of the year, because people come from all over, converging in on Festa Italiana and that's where they get to see each other and people love that.