Celebrating a semi-sesquicentennial in the restaurant industry is no small feat.

This year marks a milestone for Five O’Clock Steakhouse, 2416 W. State St., which has been serving customers (and creating fond memories) for 75 years.

That’s no small feat, especially given the events over the past year, from a surge in the price of beef this summer to the overall stressors on the restaurant industry due to the COVID-19 pandemic. But, thanks to the dedication of both ownership and staff, the steakhouse is moving forward into 2021 with a great deal of optimism and gratefulness for having made it to their semi-sesquicentennial. 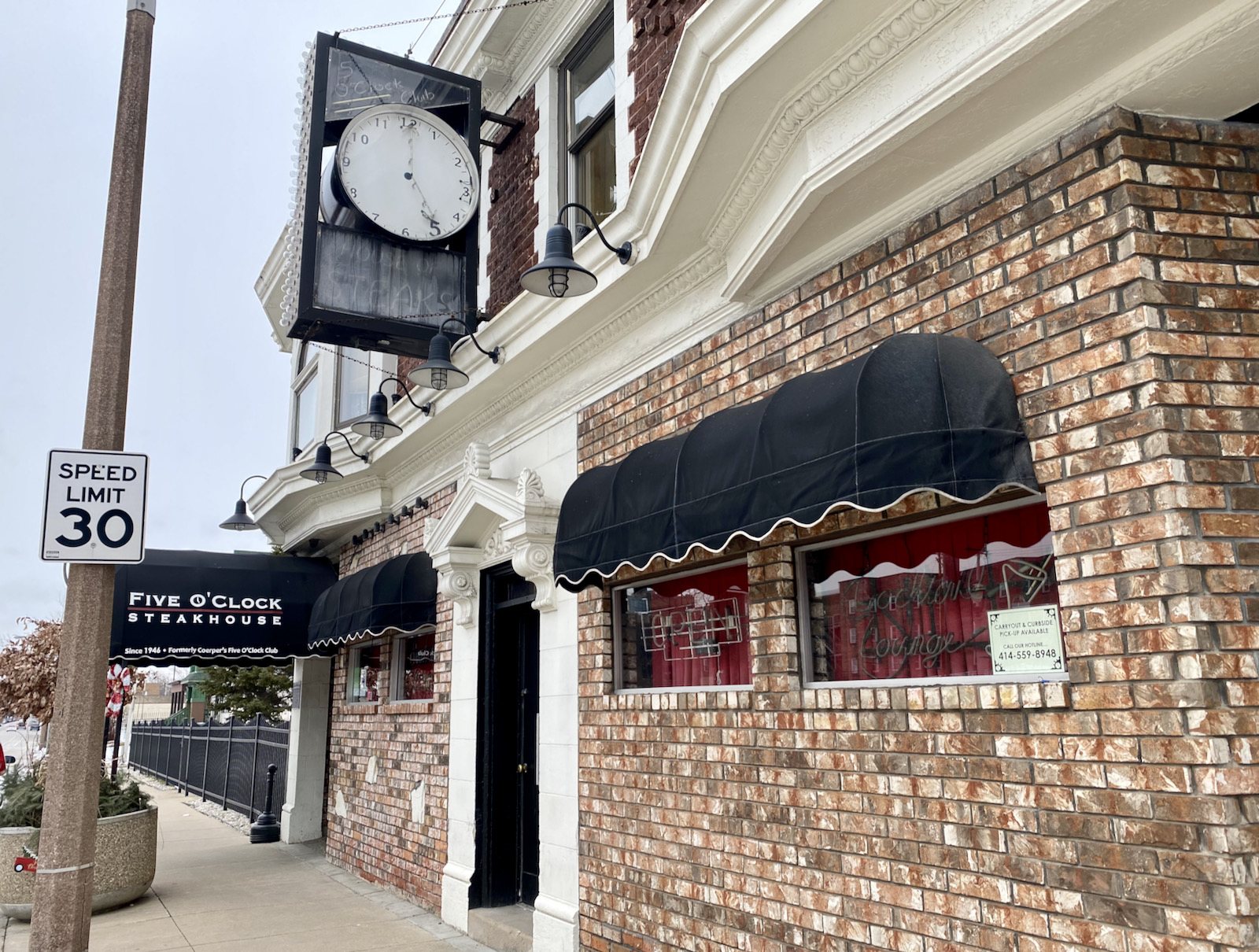 Milwaukee’s dining scene looked more than a bit different in 1946. But, the era wasn’t devoid of dining choices by any means.

Among the highlights, we saw German classics including John Ernst Cafe, Mader’s and Karl Ratzsch were swiftly gaining a national reputation as the Cream City’s “Big Three.” The Boulevard Inn made its debut on the West Side, offering favorite dishes like Caesar salad and honey duck (prepared tableside) alongside views of the scenic Washington Park.

Kalt’s restaurant was on its way to becoming an East Side institution, while Frenchy’s Cafe & Le Cabaret was making a splash as one of the city’s most popular novelty restaurants. Solly’s Coffee Shop (now Solly’s Grille) was slinging the world’s first butter burgers on the North Side. The English Room was alive and well at The Pfister, and Watts Tea Shop was proudly selling its freshly baked English muffins, chicken salad finger sandwiches and renowned Sunshine Cake on Jefferson Street.

1946 was also the year that a long-time State Street tavern, which had also operated for a short time as a bakery and – like numerous other bars – as a pharmacy during prohibition (selling ice cream, fountain drinks, “medicine” and cigars), shifted gears again, becoming one of the city’s best loved and longest running steakhouses: Five O’Clock Steakhouse. 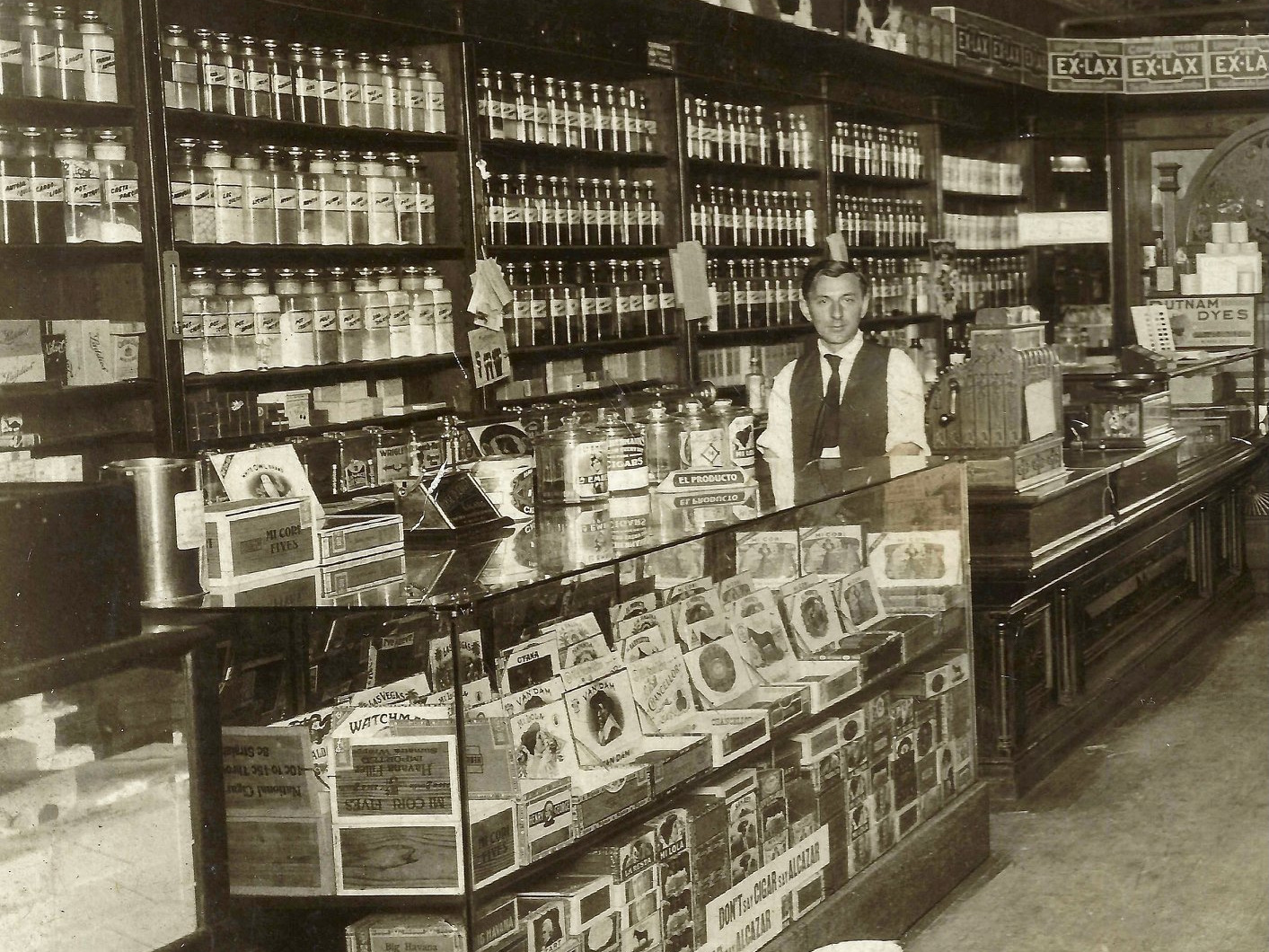 Five O'Clock Club as a pharmacy during Prohibition

The Five O’Clock Club, which arose in the era of supper clubs, embraced its new identity at the hands of Wilmer "Bill" Coerper, who added his moniker to the name and expanded the footprint of the venue, creating the foundation for the steakhouse that exists today.

“As far back as I can tell, Coerper’s adhered to traditional supper club style service,” says Stelio Kalkounos, whose family purchased the business from the Coerpers in 2004 and passed full ownership to Kalkounos in 2017.

That included starting off the night with drinks at the bar before being seated in the dining room, relish trays on the tables and live music – traditions which remain at the steakhouse today. 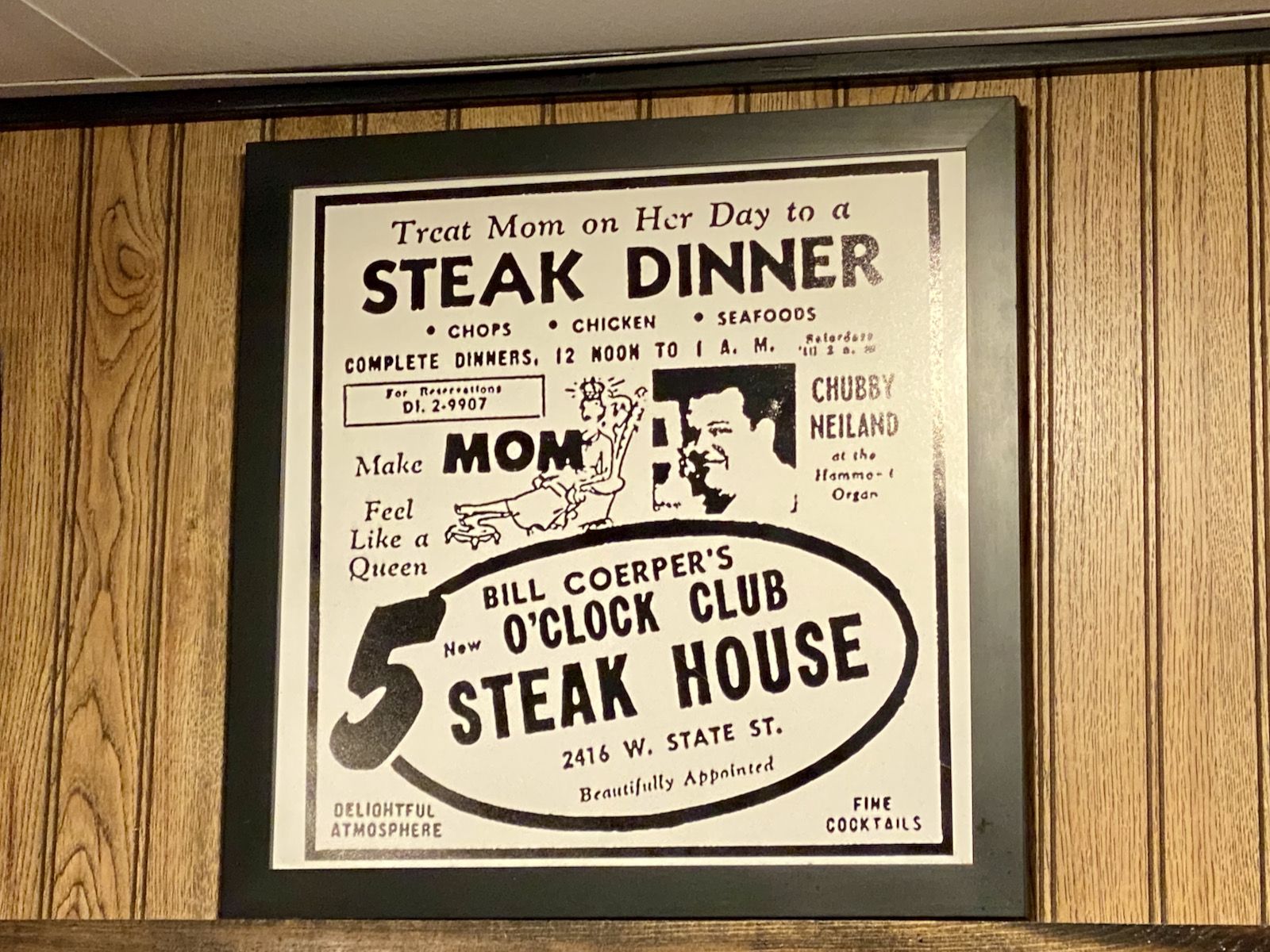 And although Coerper’s Five O’Clock Club would be best known for its steak and “seafoods,” ads from the 1950s (some of which are displayed on the walls in the restaurant) show that chicken was also a feature at the venue.

Pizza, which debuted in Milwaukee in the 1940s and expanded exponentially by the 1950s, also seems to have made an appearance on the menu (as advertised on signage from the early 1960s). It's likely a sign that Coerper kept an eye on trends that would attract new customers. 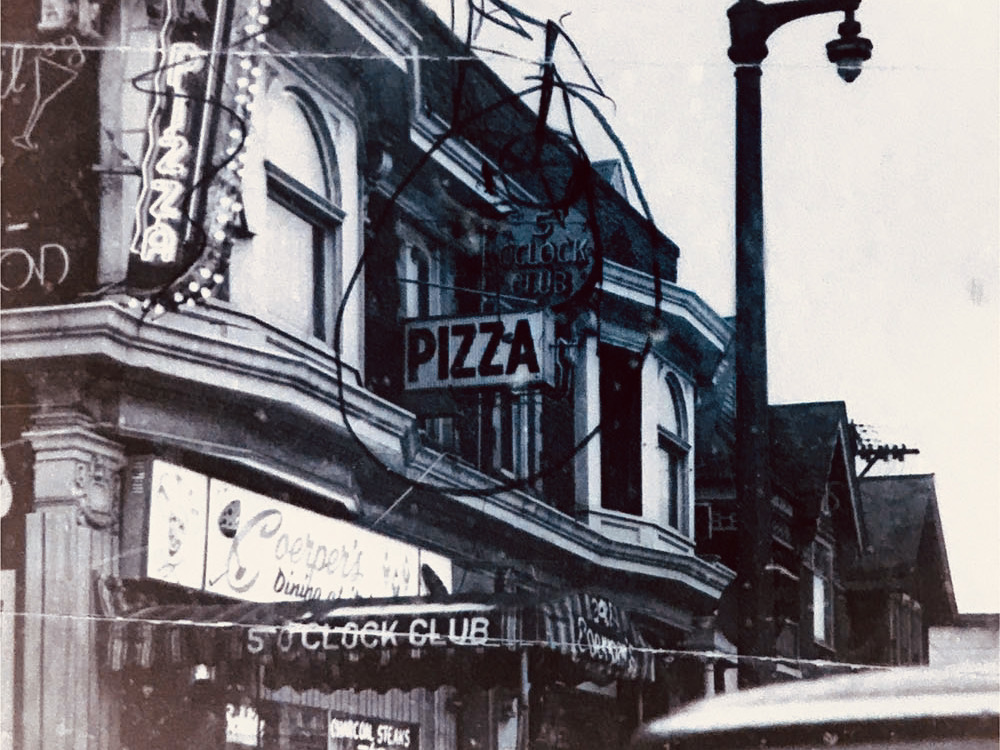 Longevity in the industry

The restaurant business is a tough one. For years, the grimmest of national statistics have suggested that the average lifespan of a restaurant is five years and – by some estimations – up to 90 percent of independently-owned restaurants close within their first year of operations. So, it takes a good deal of grit to keep a restaurant alive for 75.

In the case of Five O’Clock Steakhouse, that meant weathering 11 economic recessions (both large and small), including three in the past two decades (2001, 2008-2009 and 2020, the most recent of which has been declared the worst recession since the Great Depression).

In the case of 2020, it also meant fighting for survival during a global pandemic.

“It’s been really difficult,” notes Kalkounos, “We’re not on restaurant row. So, even in good times, we don’t get as much traffic as some places do. Our regulars know where to find us, and word of mouth has been good to us. But very few people pass us on the street and just wander in. So, it took everything from marketing and promotions to personal investments to keep the restaurant going during the worst of the storm.”

It also meant taking care of the staff. “It was tough, but we tried to keep morale up. We made sure to show them that we cared. And once we got our PPP loan, we brought as many of them back as we possibly could, giving them whatever work we could find."

When the restaurant reopened in June of 2020, Kalkounos said they were prepared. They invested in patio improvements, creating a space that could seat up to 20 guests. They also took great pains to keep in touch with their regulars, launching a video series on Facebook cleverly titled “The Five O’Clock news” and offering promotions to bring diners to the restaurant.

“Even now,” he says, “we really need to stay in touch with our customers and keep reminding them that we are here. We are open.” 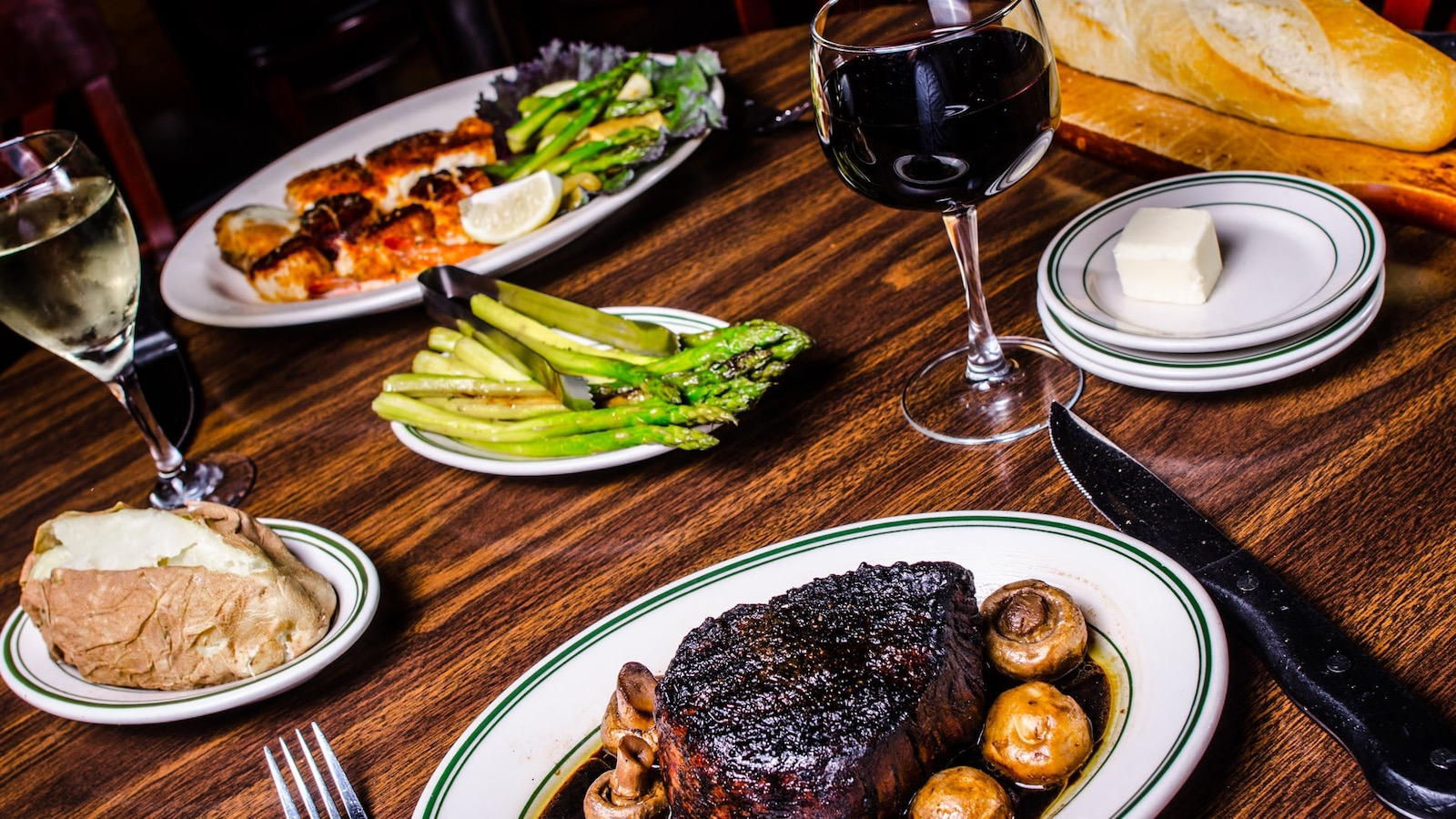 Maintaining the restaurant has been a challenge, Kalkounos admits.

“When we bought it in 2004, we made sure we had all the original recipes,” he says. “We had to make sure that everything was 100 percent the same.”

That includes the preparation of the restaurant’s steaks, which are seasoned with a proprietary seasoning, brushed with basting sauce and fired under an 1,800-degree infrared broiler (a tool the kitchen has used for over 35 years) to create their signature crust. From there, the steaks are rested and then brought back up to temp, ensuring a tender, juicy steak.

“The basting sauce,” Kalkounos says, “gives you a savory, caramelized exterior that, although it’s very dark, isn’t bitter and burnt.”

They’ve also shared (some) secrets of that process with their guests, rolling out a Five O’Clock Butcher Block offering, giving customers the opportunity to purchase raw steaks from the restaurant and recreate the experience at home. (Tip: It's a great idea for Valentine's Day at home.)

Kalkounos has also taken care to preserve traditions, like the Five O’Clock Steakhouse Wisconsin brandy old fashioned, which is still hand-muddled with sugar and Angostura bitters.

But, in addition to giving customers the nostalgic food and drinks they’ve come to expect, Kalkounos says they’ve also been sure to change with the times, adding modern offerings to the menu like fried calamari, Thai Buffalo shrimp, crab macaroni and cheese, and baked French onion soup, along with a smaller 8-ounce filet and bone-in filet.

They’ve also upgraded their steaks, with the majority processed through Prizlaff Meats. That includes their Porterhouse, New York Strip and bone-in filets which are Certified Humane Creekstone Farms Natural Black Angus. Meanwhile, their ribeye and prime rib, purchased through Meats by Linz, are raised in Pardeeville, Wisconsin and finished in Iowa. And their mushrooms (over 200 pounds a week), which are caramelized and cooked slowly in butter, are sourced from River Valley Ranch in Burlington, Wisconsin.

“When we took over, there were maybe 10 or 12 bottles of liquor behind the bar,” Kalkounos says. “And there were two wines – a Chablis and a White Zinfandel – that were served on the gun.”

Today the restaurant has a greatly-expanded, yet moderately priced, wine list as well as a list of reserve selections. At the bar, there are also expanded options, including an impressive selection of bourbons.

Those improvements, along with friendly service, have kept customers happy and returning time and time again.

To celebrate customers’ support, Kalkounos says they will be rolling out a series of promotions during their 75th anniversary year. In January, any customer who spends $100 or more (carry-out or dine-in) will receive a $20 promo certificate good for a future visit, along with a $25 bonus gift certificate to the Chicago Prime Family of restaurants in Schaumburg, Illinois. In addition, a portion of all sales during the month of January will support The Hunger Task Force. In February, a portion of all sales (Tuesday through Friday) will benefit St. Ben's Community Meal & Capuchin Community Services.

Ultimately, Kalkounos says that allowing the Five O’Clock Steakhhouse to become a casualty of the pandemic simply isn’t an option.

“This place is a functioning time capsule,” he says. “And I consider myself a torch bearer. One day I hope to pass this business on to someone else. So, I need to keep it going.”