This afternoon on Facebook Live, we rolled into Fro Zone, the newly opened ice cream shop on Brady Street, to roll some special ice cream sundaes with the help of co-owner Mike Kaid. Or more like Kaid made ice cream rolls and I just made a mess.

No, unfortunately we did not get to roll ice cream with Samuel L. Jackson's superhero character from Pixar's "The Incredibles."

This afternoon on Facebook Live, however, we did the next best thing: We rolled into Fro Zone (the ice cream shop, newly opened at 1320 E. Brady St. just this past summer) to roll some special ice cream sundaes with the help of co-owner Mike Kaid – all under the watchful eye of a Fro Zone (the superhero) wall mural. 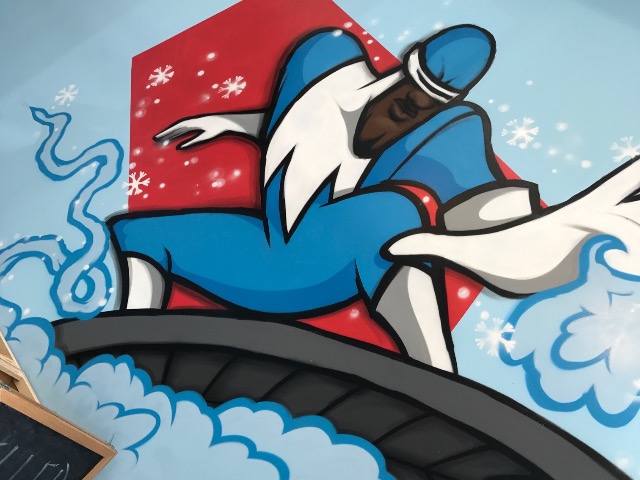 OK, so maybe Mike made ice cream rolls, and I made more of a mess of their kitchen.

But still, we learned a lot about the hottest craze in frozen desserts, a Thai-inspired process in which you quickly freeze an ice cream mix, mash in the flavor, flatten the delicious mess into a thin plate and scrape it up into several thin ice cream rolls, crowned with tasty toppings. It's a fun and flashy play on the classic ice cream sundae that's taken the country by storm, inspiring all sorts of tantalizing tributes to the snazzy, sugary spirals via YouTube, Instagram, Snapchat and more.

The good news is that I will never be behind the ice grill ever again. The even better news is that, after less than half a year in its Brady Street spot, Fro Zone ice cream rolls are such a hit that it's expanded to a second store. Just this week, Kaid and company – partnering up with the East Side donut shop Donut Squad, co-owned by Kaid's brother – opened a new tandem location found in the food court at Brookfield Square. So now you've got a place to cure your cravings for ice cream rolls AND donut holes at the same time.

If you'd rather spin by the original, however, the Brady Street spot – complete with a new menu of sundae options – is open during the winter from 2 p.m. until 1 a.m. on Thursdays, Fridays and Saturdays, and from 2 p.m. until midnight the rest of the week.