This is a story about Marticia Jenkins, but not about just her. It's about dozens of generous and kind people, and two very special women, who have set in motion a series of events that are going to make a huge difference in Marticia Jenkins' life.

This is a story about Marticia Jenkins, but not about just her.

It’s about dozens of generous and kind people, and two very special women, who have set in motion a series of events that are going to make a huge difference in Marticia’s life.

And it’s perhaps fitting that this story be told on March 21, the date declared "Single Parent Day" in the United States. The proclamation was made in 1984 by President Ronald Reagan.

The best – and perhaps the only – way to tell this story is in chronological order. So sit back, relax and join in this journey.

On Monday, March 11 (the day of a big snowstorm) I started driving for Uber early in the morning and picked up Marticia and her children, including one infant, at their central city home. The Uber driver app said that there would be two stops.

The first was at a daycare center, where she dropped off the children. The second was at a Taco Bell restaurant in Oak Creek, a $20 ride. Marticia (I didn’t know her name then) got out of my car and walked through the snow to the store, where she waited for someone to unlock the door and let her in.

I was moved by what is obviously a struggle for this woman. A $20 ride to a job that probably pays just a little above minimum wage. And another $20 coming home. So I wrote about her ride last Thursday.

On Friday morning, I got the following Facebook message: 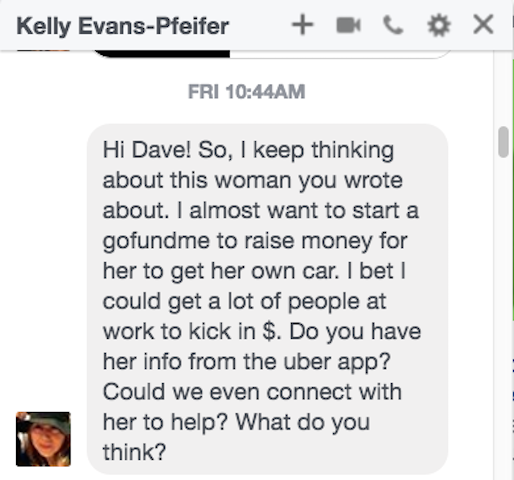 Kelly is the daughter of one of my dearest friends, Judge Terry Evans, who died unexpectedly and much too early in the summer of 2011. He was my most frequent golf partner and a man whose intellect and humor were exceeded only by the size of his heart. He left a wife, two daughters and one son, plus assorted other family members. His memorial service was gigantic, with everyone from building custodians to a United States Senator and some of the most distinguished jurists in the country.

His daughter, who lives in San Francisco with her husband Eric and daughter, 11-year-old Stella Ellington, obviously inherited his spirit of love and generosity.

Kelly and I talked and we agreed to see what we could do for Marticia.

Kelly went to work on the GoFundMe page. I called my neighbor, RoseMary Oliviera, who had tragically and unexpectedly lost her partner just a couple of weeks ago. She was selling his car, asking for $2,500 but willing to take $2000 if we could raise the money for Marticia.

By Saturday afternoon the GoFundMe page was live and very active. "I feel confident we’ll get to our goal (of $4,000)," Kelly said, so "we can get the car, insurance and car seats for her kids."

Kelly used her social media connections, I used mine, and OnMilwaukee utilized theirs to raise funds to help.

I called the Taco Bell where I'd dropped Marticia off and explained what we wanted to d0. The manager said she would have her call me. "This is so wonderful," the manager said. "I hired her when she was homeless and she’s been just great. But her life is a struggle. A real struggle."

Not long after that, Marticia called and we discussed what we wanted to do for her. I could hear the tears over the phone.

I asked if she had a driver’s license, and she said she used to, but will have to get a new one. I told her the car, a Toyota Scion, was a stick shift. "I can learn how to drive it," she said. "I’m smart."

Her two kids are Logan, 4, and Olizianna, who will be 1 next month. She spent a few months last year living in a shelter, but is now living with a cousin.

I sent her a link to the original story and to the fundraising page.

Then it was time to watch and wait.

Kelly kicked it off with $100. Then came someone named Melanie Wong, with $10. Then Olivia Baker and David Roth, each for $25, and it was as if a water tap of love had been opened. Everything from $5 to a $500 donation from a colleague of Kelly’s, San Francisco writer Diana Kapp. Someone else donated $18. Lots of people wanted to remain anonymous.

By Monday afternoon, we were there. My insurance guy had come up with a policy for Marticia that would fit in the financial picture. Kelly priced the car seats for her two children. We had researched the best way to get the title transferred and the car registered in Marticia’s name. We were working out all the details.

On Monday night I talked to Marticia and gave her the news about the car and the rest of it.

Finally, she was convinced that it was for real. She had seen the OnMilwaukee article and had visited the GoFundMe page. Then she called her cousin in Raleigh, NC, Donald Holden, and he called me.

"I'm her favorite cousin, and when she told me about this I told her it was going to change her life," Donald said. "All of you have no idea how much of a blessing this is. She has a large family but we don't have a lot of money. This is something that will help her build a better life for herself and for her children."

MKE makes progress with 10,000 Homes Initiative but leaders say more can be done