Hit a homer: A guide to dining at the sometimes enigmatic 4th Base

For some, 4th Base is a perfect fit. But for others, the unique bar and restaurant - which doesn't have a menu - is just plain enigmatic. So, we've put together a guide to eating at this unique sports bar.

We’ve written in the past about 4th Base, the Delphian sports bar that serves up grilled steaks, lobster and more in an environment littered with athletic paraphernalia and beer taps.

"We like to call it a ‘made to order’ kitchen," notes Manager Carmine "CJ" Papara, "Which means that you can get pretty much what you want, and as much as you want, when you want it. Everything is fresh, and we aim for a high quality dining experience. Our sandwiches aren’t average. Neither are our salads."

And for some, the bar and restaurant is a perfect fit. In fact, business people and neighborhood folks alike line up at the bar, not just for a beer after the Brewers game, but for bacon wrapped scallops, surf ‘n turf and fresh Blue Point oysters. For many, it’s an appreciably unique experience that you simply can’t get elsewhere. 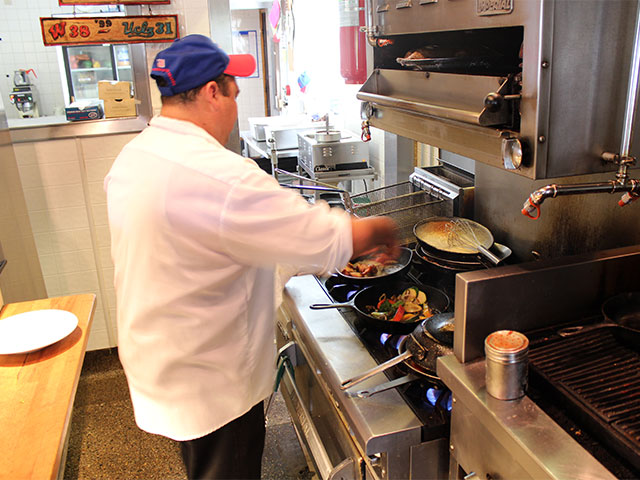 But for others, 4th Base is just plain enigmatic. For one, there’s no menu. And that means that – although the sky is the limit in terms of what you can order – you have to put a bit of trust in the chef to create something you’ll love. And, there’s no point of reference for exactly what it’s going to cost.

On a recent visit, we talked with Papara about some of the challenges new diners face when walking into a menu-less restaurant. And we came up with this list of tips, which are meant for both newbies and those who have been repeatedly perplexed by their visits to this West Milwaukee staple.

Make peace with the disconnect

4th Base is, at its core, a sports bar. There’s sports paraphernalia on the walls (even in the back dining room, which does offer more traditional seating, complete with red tablecloths). You’re not going to find super fancy plating or an upscale wine list. And – if you make the decision to order a 16-ounce lobster tail alongside a 24-ounce bone-in ribeye – you’ll still be eating it in a sports bar. And it will cost you about the same amount of money as it would if you ordered it at a swanky Downtown restaurant.

If that bothers you, you can stop reading here.

On the other hand, if you’re thinking "that sounds cool," keep scrolling because we’ve got more. 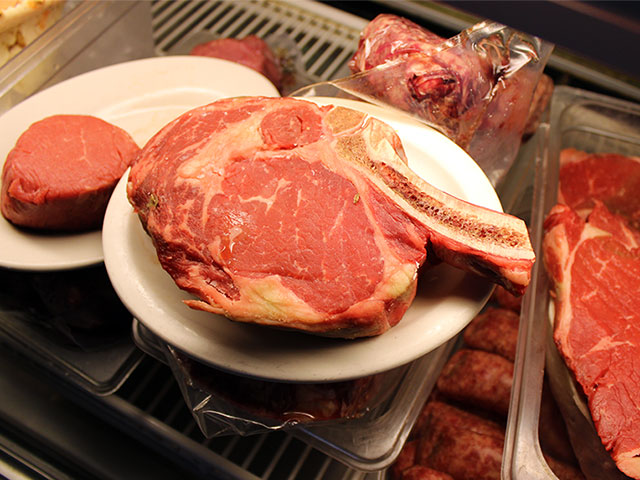 If it’s your first time there, let them know

The servers will be better able to help you if they know you’re not a pro at the "ordering without a menu" game.

Also, let them know if you’d prefer a spot that separates you from the sometimes rollicking bar. There’s also that dining area in the back that’s a bit more quiet.

Papara notes that for first timers visiting over the lunch hour might be a good option. The bar is less busy, so there’s plenty of time for servers to answer all of your questions.

Start with something easy

You don’t have to go whole hog and order steak and lobster (though you can, if you’d like). Start off with a burger and onion rings. Or order a cup of housemade soup and a salad.

"If you’ve never been here before, we realize that we have to earn your trust," says Papara. "And we want you to be happy. So, even if you just order a burger, we’re going to expend the same effort to make it great. And if you love what you’ve eaten, then you’ll feel more comfortable going bigger the next time." 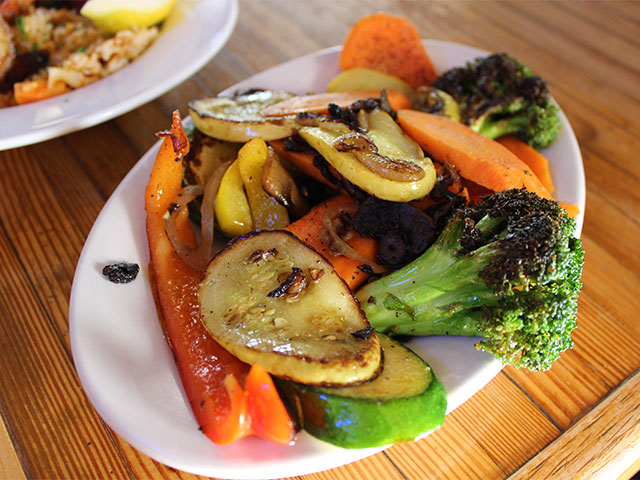 The biggest mistake customers make when walking into 4th Base and placing their order is that they fail to ask questions along the way.

"Our prices are not cheap. But, let’s be honest. Do you want cheap seafood? Do you want cheap steak?" asks Papara. "It’s about quality. If you're going somewhere Downtown and ordering jumbo shrimp or jumbo scallops or Alaskan king crab, it will cost you about the same. In that regard, we're not expensive. It's just, how many sports bar places have the food that we have?"

Part of the art of dining at 4th Base is interacting with the server, who should be happy to give you all the information you need. Unless you know exactly what you want, asking questions is the smart way to zero in on something you’ll really enjoy. It’s also the best way to prevent sticker shock at the end of the meal – because if you ask, they’ll tell you exactly how much everything is going to cost.

On a budget? If you have $30 and you want seafood, servers can help you narrow in on dishes that you’ll be able to afford. Only have $20? The server can make suggestions for options that won’t break the bank.

Want a sense of what things are going to cost? Here are some examples of dishes ordered on a relatively regular basis.

The Texas chicken sandwich, which includes breaded chicken with bacon, melted cheese, barbecue sauce and mushrooms onions and peppers and your choice of fries or onion rings is $14.

An 8-ounce grilled filet with mushrooms, onions, peppers, choice of potato is $30 And a 16-ounce strip or ribeye for about the same price. If you want to add vegetables, a good sized plate will run $6-10, depending on the vegetables and preparation. And a side salad is typically $6.

Crab stuffed shrimp are $8 each. Meanwhile, a crab-stuffed portabella mushroom (which typically contains 4-6 ounces of crab) will run $20-30, depending on the size.

You can also get a hand-cut steak sandwich for $18 or a burger made with ground sirloin for around $12. 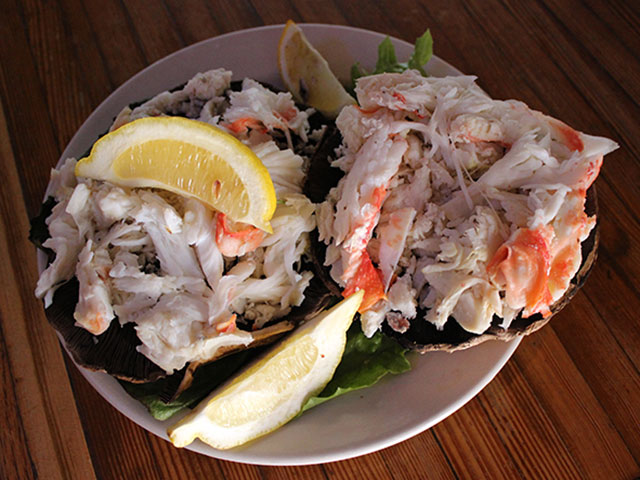 Take a look at the case

Yes, you should get up from your table and walk over to the case. You can examine the raw ingredients, as well as get some ideas for things you might want to order. You’ll typically find five or six kinds of vegetables (like brussels sprouts, asparagus, cauliflower, zucchini), shrimp, scallops, perch, walleye, 8- and 16-ounce lobster tails and Alaskan king crab legs. You’ll also see a 24-ounce bone-in ribeye, 32-ounce porterhouse, ribeye or strip loin.

Take note: the case contains nearly all larger ticket items, including steaks and seafood. There are plenty of other items available that aren’t on display. So, if there’s something you’d like that you don’t see, feel free to ask about it. 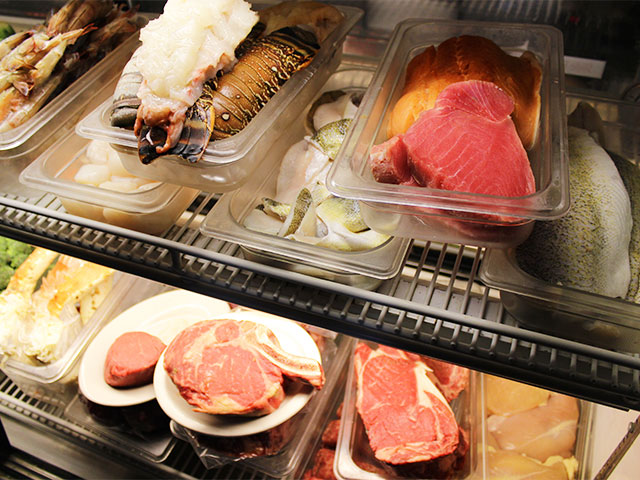 Keep in mind that portion sizes are large

It’s easy to let your eyes get bigger than your stomach, and that never feels good on your pocketbook. Even two large bacon wrapped scallops is a pretty hearty portion, especially if you’ve ordered a side of rice or vegetables.

We had a brief chat with a customer who says he’s been going to 4th Base for the past 29 years, and even he admitted that the first time he visited, he was surprised by the size of his bill. But, he was also impressed by the portions.

"The first time I visited, I didn’t realize that some of the items were priced individually," he noted. "On the upside, it was also a ton of food; I couldn’t even finish all the shrimp."

Since then, he says, he’s gotten a bit smarter. He knows how much food he’ll be getting, and about what it will cost. He notes that one of his favorite dishes to order is the Chicken Vesuvio, which he says is "absolutely delicious."

Literally everything is customizable, from the size of your steak to the seasonings on your vegetables. Want something spicy? They’ll make it spicy. Don’t like garlic? They’ll make you something without it. Vegetarian? Not a problem. Gluten-free? Make sure you say so.

And, if you’re feeling adventurous, spin the wheel of uncertainty. Tell your server you’d like "a seafood dish in the $25 price range" and they’ll bring out something interesting. 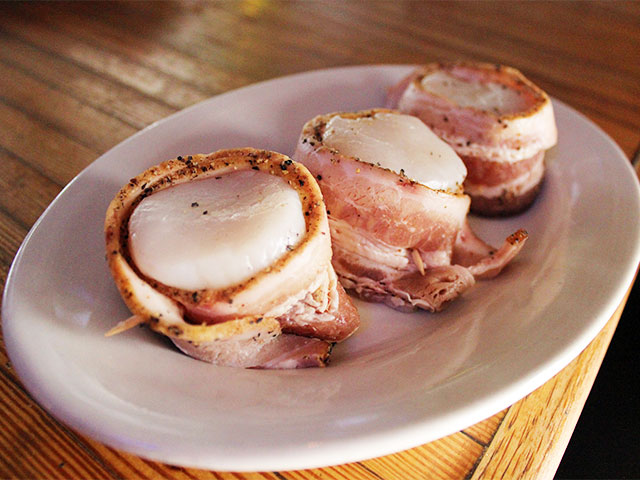 Fear of commitment is A-OK

Unlike most restaurants, you don’t have to eat a whole order of anything. In fact, you shouldn’t be afraid to order one of something, just to try it out. Want one bacon-wrapped scallop? They’ll do it for you. And, just in case you’re wondering, they’re $8 each.

"Where a typical dish in a restaurant will have a set amount of shrimp; here, you can order as many as you’d like," notes Papara. "If you like, you can even order a burger with two bacon-wrapped scallops on the side."

Feeling indecisive or overwhelmed by choices?

The bar’s original wooden menu from 1977 is posted on the wall, and all the sandwiches listed are still available. So, if you need a guideline – for lunch or otherwise – take a look. There’s also a second board just off to the right that lists off ideas for items in the case that day. You should also feel free to peruse the photos 4th Base posts on Facebook and Instagram. Another person’s creation might just be your new favorite dish. 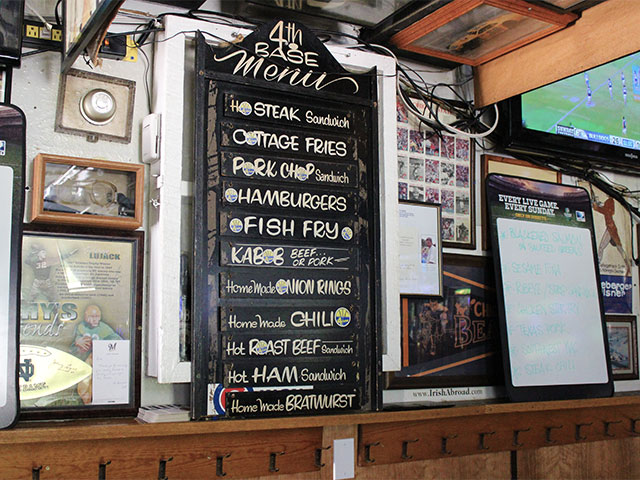 So after all that, you might ask, why not just have a menu?

"We’ve thought about it," says Papara. "But, it just goes against what we stand for. I think it limits what you do. I want to be able to give you – specifically – what you want. And I just can’t do that with a menu."