The Immigrant Project aims to elicit change through human connection

When local tech entrepreneur Ruben Flores made a simple, screen-printed T-shirt emblazoned with one word (IMMIGRANT) and began wearing it around town, he had no idea that it would spark a movement.

When local tech entrepreneur Ruben Flores made a simple, screen-printed T-shirt emblazoned with one word (IMMIGRANT) and began wearing it around town, he had no idea that it would spark a movement.

"I’d just finished a book called ‘Start with Why’ by Simon Sinek," Flores says, noting that it prompted him to consider the whys in his own life. "And all at once, the idea popped into my head. I’ve always felt that the word defined me, and I realized that it was one of my biggest motivators … to do justice to my parents sacrifice and to do better to help my family."

Flores says it also happened to be around the time that the notion of building a border wall between the U.S. and Mexico was all over the news. 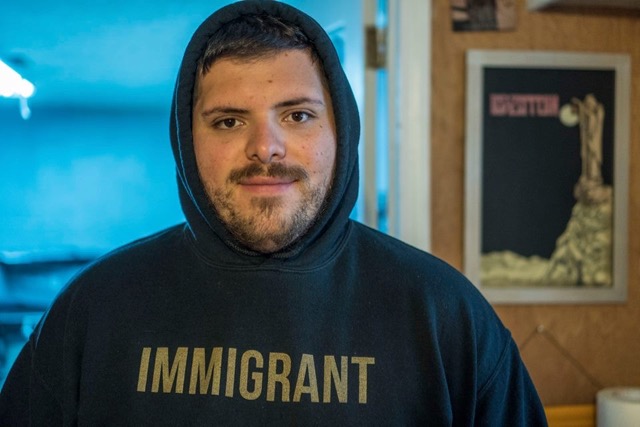 "I got so many reactions. I’d be at Whole Foods or on the bus and people would ask me where I got the shirt. One night I was in a bar and a complete stranger came up to me and he said: ‘You’ve got balls. Where’d you get that shirt?’"

When he told him that he’d made it himself, the man responded, "Wow, that’s so powerful." Flores says he immediately took down the man’s address and mailed him a T-shirt.

As the scenario repeated itself, time and time again, Flores says he began to realize how many people felt a connection with the messaging. "I began making more shirts," he says. "And as people showed interest, I’d give them one."

From there, Flores began sharing his story. And the more he shared, the more people responded.

"So many people identified with the idea of being an immigrant," he says. "I started getting notes from people all over … immigrants from Germany and Puerto Rico and Kiev. And there was such understanding, such an emotional connection. I even got a note on LinkedIn from a German immigrant who felt compelled to share his story with me."

He realized he’d hit upon something powerful. And he decided to document and showcase the faces of all of those incredible people.

He started an Instagram account called Immigrant Project. And he posted a photo of himself wearing the IMMIGRANT t-shirt with the caption "Ruben, Mexico, #immigrant."

"My thinking was, if we can bring people together under one umbrella to acknowledge the fact that we’re human, and that all of us – at one point – had a family member who uprooted themselves and became an immigrant, we win," he says. "This isn’t about being a Democrat or a Republican. And we’re not fixing the system with this. It’s about human beings. And it’s about getting in tune with who we are, at the core." 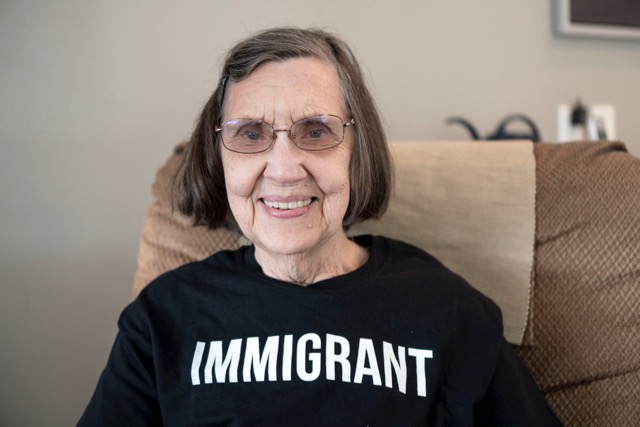 From Guadalajara to Milwaukee

Flores was born in Guadalajara, Mexico. But when he was 13 years old, he says, a number of factors prompted his family to make the move to Milwaukee.

"My parents were both highly educated chemical engineers," he says. "And a number of things – including a lack of opportunity for them – inspired us to explore another place. My great-grandmother had married a veteran from Milwaukee who she met in Guadalajara, so the city made sense. We had a connection there."

Flores was 13. His sister Betsy was 11, and his brother Joab was just 6 when they made the move.

"I spoke zero English when I started at Kosciuszko Middle School," says Flores. "And I’ll never forget meeting another immigrant student. He was in the cafeteria crying because his feet hurt. And I learned that they were burned from walking in the desert. His journey to America had been very different from mine. But our ground was the same. Neither of us knew English. And we were both kids that were completely out of our elements."

When Flores graduated from high school, he was at the top of his class. In fact, he was offered numerous scholarships to various universities. Unfortunately, he says, he couldn’t take advantage of them.

"The doors were closed to me because I wasn’t a citizen," he says, recalling an afternoon spent with his girlfriend, Bridgette, at her dad’s house. "I was lying on the carpet and I was crying. And I remember saying to her: ‘I’m supposed to go to college and do great things. And now they’re telling me I can’t do any of it.’"

Flores says he refused to compromise by taking a job working at a factory. Instead, for an entire year, he immersed himself in study.

"I’d go to the union at UW-Milwaukee every day," he says, waiting for Bridgette. "I knew I wanted to go into the technology field. So I would sit there for hours, reading and studying and learning."

Eventually, he says, he and Bridgette made the decision to get married. At that point, he says, he took the citizenship exam and became a permanent U.S. resident. From there, he went to UWM for computer engineering. His dream had taken flight. 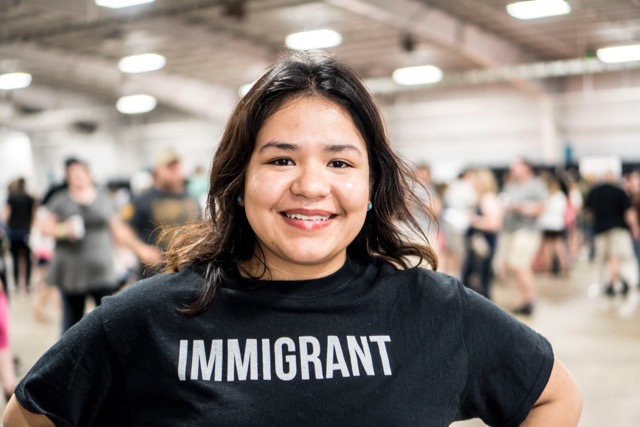 When he entered the field of technology, he says he looked around.

"As a Mexican tech entrepreneur, there’s virtually no representation," he says. "There are no Latino founders sitting in the board rooms of these tech firms, no Latino Elon Musks building empires. But I can’t be alone. I have goals and things I’m working toward. But I also never forget where I came from. And there’s power there.

"Never lose sight of where you are from, of what moves you and drives you."

Flores says his story is a difficult one to share.

"It’s tough," he says. "But it’s important for me to take control of my story, to own it. My parents sacrificed everything that they had to give me what I have. My father always told me, ‘You are going to have to always work twice as hard to get what you want in this country.’

"And I have put 1,000% effort in every single thing I do. I do not settle for mediocrity. Many roadblocks have been thrown my way, but the struggle motivates me. It fills me with ambition and purpose. I believe that the only true roadblock in my path is myself.

"Being an immigrant is the fuel that drives me. There is not a day that goes by, where I don’t think about the sacrifice my parents made for me. It defines me. And everything I ever amount to will only serve to do justice to what they did for me, and that spirit will live on through my descendants to come." 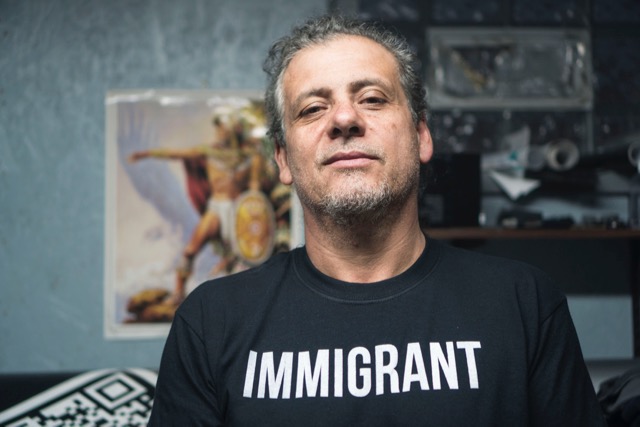 Taking it a step further

"Everything is polarized," says Flores. "We’re so disjointed as a country. But when you create these connections, everything begins to change."

He says connecting people is at the core of the mission for The Immigrant Project, which has progressed from a simple collection of photographs to an initiative that he hopes to use to empower – and ultimately to assist – young, aspiring entrepreneurs to achieve their dreams.

"Our city is going through an entrepreneurial resurgence, but I still feel like we’re not tapping the full potential," he says. "And some of that has to do with the fact that we’re not empowering the immigrants, the leaders of tomorrow. People feel that – because of their background – there’s a glass ceiling. They don’t feel entitled. And it breaks my heart.

"I think it’s important long term to really leverage these stories to provide a brighter outlook … to help people see that no matter who they are, what they look like or who they love, if they have the drive and determination, they can do anything. And they don’t need to be so afraid of failing."

Flores says the project has already sparked the interest of a number of local residents including Leslie Cadillac, Socorro Perez, Edgar Sabino, Adam Sarkis and David Sidhu, all of whom have offered a verbal commitment to assist the project moving forward. His wife, Bridgette, who has a masters degree in sustainable peace building, will also be taking the lead in directing various aspects of the project, making use of her years of experience in the non-profit sector.

In the end, he says, it all begins with awareness. But, as the Immigrant Project network grows, he says he’d like to use the momentum to take action for good. In the immediate future, that might take the form of a public event during which Flores and his team sells T-shirts, with proceeds going for a good cause. But Flores says he hopes it can go even further.

"Our initial goal is to build a network of like-minded people," he says. "And then we begin the process of empowering youth."

He says the project could take the shape of a non-profit, an incubator that focuses on technology, art and leadership.

"In my mind," he says, "That’s the goal. It’s a place where we can harbor that vision of the world we ultimately want to build together."

Flores says the project is important to him on a variety of levels. And, at its base, he hopes it will prompt a sense of understanding among members of its audience.

‘We are all immigrants, either directly or through our ancestors," he says. "And when we use this term, it’s inclusive. It’s not about creating exact definitions, but about self identity. My hope is that we can bring people together in the realization that we need to build longer tables instead of taller walls."