In 11 years of living with every iPhone model but the first, I've never laid hands on a more subtle upgrade as the new iPhone XS. Even I can barely tell what's going on with this $999 phone. Should you buy it? Read on.

In 11 years of living with every iPhone model but the first, I’ve never laid hands on a more subtle upgrade as the new iPhone XS. Even I can barely tell what’s going on with this $999 phone.

After 24 hours of putting this new device from Verizon through its paces, only the most advanced user – and I count myself in the group – would notice they’re holding a different phone than the iPhone X. In fact, if you read last year’s first-look of my first look of the iPhone X, you can probably just read it again, because the changes for 2018 are so nuanced.

So nuanced, in fact, that I’m going to have get a little dorky here. Don’t say you haven’t been warned: 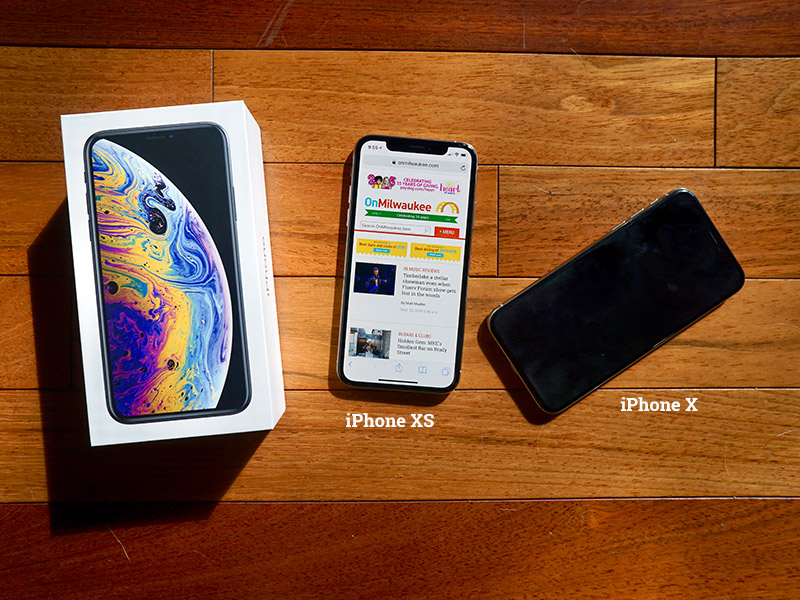 Seriously, there are changes on this new phone, but whether they matter to you for the premium cost of $999 for the perfectly ample 64GB model depends on where you’re coming from. Even compared to last year’s iPhone X, websites on Verizon LTE load noticeably faster (I’m not imagining this; "Gigabit LTE" is snappier than my home wi-fi).

Everything is a little faster, actually: the Face ID recognizes its subject more quickly and accurately; apps swipe and pop up faster. It’s not extremely noticeable – unless you look at an older iPhone. Then, it’s night and day. Some of that comes from the software improvements via iOS12, but having run that on my iPhone X for the last five days, these speed bumps are real. Wireless charging is also apparently faster, but I can’t test that yet, since my charging puck apparently can’t take advantage of that.

For me, I’d always upgrade to a newer phone just because of the camera, and not surprisingly, the camera on the iPhone XS is spectacular. But so was the iPhone X’s. I notice improvement in low-light photography like sunsets, with less high ISO graininess (thank you, multi-level HDR).

This is how you adjust the #bokeh in portrait mode on the #iPhoneXS. It’s pretty fast and easy if you already know how to use an iPhone.

The biggest feature here, though, is the layer separation in Portrait Mode, in which you can adjust the bokeh (or background blurriness) with a simulated aperture control after you take the photo. While it seems a little gimmicky, it’s a stunning mashup of hardware and software, and it’s nothing like applying a tilt shift blur filter in Instagram. I will definitely use this (and probably overuse this) extensively when taking purposeful photography. Remember: this phone is expensive, but less than the cost of a good f1.4 autofocus lens at 20 times the thickness of this pocket super computer.

There are a few other significant changes from the iPhone X worth mentioning. The volume is noticeably louder and clear at high levels. We’re approaching a time in which you could listen to music without an external speaker, and it wouldn’t suck. This device is now a little more waterproof, too. No way am I testing out its claim of IP68, and I don’t recommend you drop it in the pool. You could probably drop it in the toilet, which may cause you to die of grossness, but the phone will probably survive.

Clearly, there are a few other technical improvements under the hood, but I assume you read my iPhone reviews on OnMilwaukee because you’re looking for the opinion of a daily user, who knows this product from a consumer’s point of review.

While the upgrade/data transfer process is now smoother than ever, and it took hours not days to make this phone fully functional, it oddly refuses to transfer my iMessages from iCloud. After a few hours of deep dives into technical articles, I conceded that the new phone simply wasn’t going to show my texts sent after July 18, so I declared "text bankruptcy" and just deleted all my old messages. That felt oddly good.

Also, my minimalist Spigen case doesn’t quite fit this phone. Outwardly, the only changes are the speaker holes on the bottom and a few millimeters in the shape of the camera hole. For now, I’ll probably tweak this case with a razor knife and sandpaper, because believe me, you don’t want go commando on this ice cube of a phone. It might be more durable, but like its predecessor, it’s also the slipperiest iPhone ever.

So, should you buy this thing?

In a word, no, but only because the iPhone X is discontinued – but if you act fast, it’s still for sale and costs significantly less. When that’s gone … then yes, you should buy it. Unless you already have the iPhone X. Then you shouldn’t. Confused?

I always advocate for the best, newest phone. Personally, I use my iPhone for work and for play, and I spend more time on this device than anything else I own. Batteries don’t last forever (I haven’t noticed an appreciable difference in an otherwise pretty good daily life of the X), but almost no one will notice the re-engineering that Apple put into its new flagship model.

However, just because I can’t wholeheartedly recommend upgrading from last year’s model, there are valid reasons to consider this phone if you have anything less than the iPhone 8.

First of all, it’s your money (unless you are fortunate enough to work with Verizon corporate to get this phone to write an honest review, like I did). If you’ve held on to an older iPhone for several years, why wouldn’t you want to spend a few hundred bucks to upgrade to the newest, fastest hardware? You probably wouldn’t agonize over a $200 price difference for a better laptop that you won’t use nearly as much. And hobbyist photographers will certainly benefit for the best in class camera that will only get better through iOS 12 updates.

Yes, I hoped for more – but I also understand that the company now worth a $1 trillion is iterating annually, while transforming the market every other year. While the iPhone XS feels maddeningly the same as its predecessor, it’s still the best phone on the planet. If that’s enough for you, you won’t be disappointed when you get your hands on it.