Typically, my annual early reviews of the Apple's new flagship phone are called "24 hours with the new iPhone." That tight time frame wasn't possible this year, because the new iPhone 7 took more than a day and a half just to update all my apps, photos, videos and iCloud data. I only started to really see it work as promised by Saturday night.

Typically, my annual early reviews of the Apple’s new flagship phone are called "24 hours with the new iPhone."

That tight time frame wasn’t possible this year, because the new iPhone 7 took more than a day and a half just to update all my apps, photos, videos and iCloud data. I only started to really see it work as promised by Saturday night.

And that, in a nutshell, summarizes everything good and bad about smartphones in 2016: because software gets more powerful and demanding and even more bloated, we’re expected to push our devices in ways we never imagined a few years ago. In other words, on a daily basis, the new iPhone 7 doesn’t feel like it’s doing anything faster or better than its year-old predecessor, but it certainly is. Whether you care about these efficiencies is totally up to you.

I needed the new phone to replace my year-old iPhone 6s for one main reason: battery. The rest of the many reasons were purely elective. I can tell that this phone stays powered more often, but the question will be how it performs in a few months, not straight out of the box.

Like many of you, my iPhone isn’t just my mobile office; I use it for work more than I use my desktop and laptop computers, and certainly more than my iPad. I use it so much that, according to tests, my battery had depleted more than 80 percent in the last year. It could barely keep a charge for more than a few hours. I was constantly plugging it in, forcing it into low-battery mode, or just watching it die. While that’s unacceptable in such a short period of time, on face value, anyway – all cell phone batteries contain a limited number of charging cycles, and if you use too many, the battery just doesn’t perform anymore.

So I needed a new phone, iPhone or Android, and while I no longer consider myself an Apple "fanboy," I stay within the company’s ecosystem because of its integration across my workflow and my family’s, too. I’m less interested in piecing together apps on the Android platform to do the same stuff iOS already does, even if it’s not innovating at lightning speed anymore. I want stuff to just plain work, which is also why I never ever consider moving away from Verizon Wireless: I want fast and reliable data. A few bucks here and there on hardware, software and network doesn’t change that.

Philosophy aside, I’ll just dive into some personal observations about the iPhone 7. You can read opinions all over the Internet. Mine are only marginally more relevant to a reader, maybe, because I’ve owned every iPhone but the first, on both AT&T and Verizon, and I use it almost exclusively in Wisconsin. And, I think I use my phone more like the average user; it’s not a gaming device to me – I want a phone that works, takes great photos and videos, and powers my work life, too. 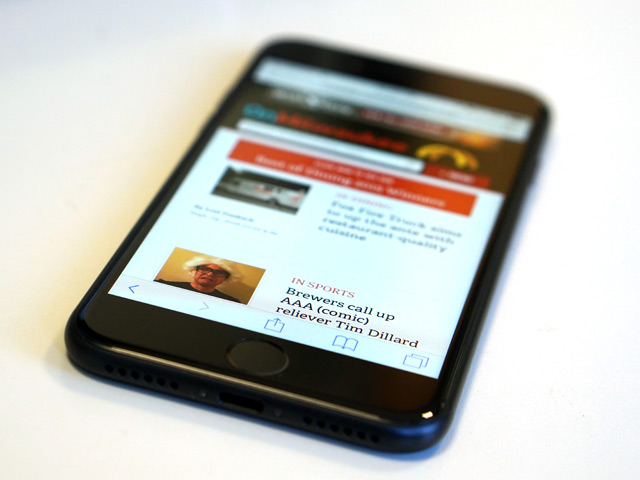 Yeah, the iPhone 7 looks just like the iPhone 6 and 6s, but it kind of doesn’t, also. With fewer antenna lines, the eliminated headphone port (more on that later) and in matte black, it looks nominally better than its predecessor, which is pretty boring. I’m also disappointed that we’ll have to wait another year for a new design, but subtly is now the name of Apple’s game. The screen looks better, like my iPad Pro, but it also feels warmer (read: more yellow). That’s a personal preference, and one that I don’t love.

Big deal. When I started running in 2009, I immediately bought a pair of Bluetooth headphones, because I didn’t like the dangling, tangling cord or leaving the earbuds in my shorts, then washing them. While you can now buy much better Bluetooth headphones for less than $25, Apple isn’t exactly catering to the bargain consumer. Keep in mind that this phone costs $750 in a good configuration. If you’ve invested in fancy wired headphones, then you can use the included dongle. If you haven’t, you have tons of wireless options. Just like it did when it killed the floppy drive, Ethernet port and CD-ROM drive, Apple is forcing industry advancement toward more wireless stuff (I predict wireless iPhone charging next year). If you don’t like that, then you probably shouldn’t buy this phone. On a related note, the new speakers are a bit louder than the previous iPhone. It’s not a huge difference, but you can hear extra clarity and volume from the 7. 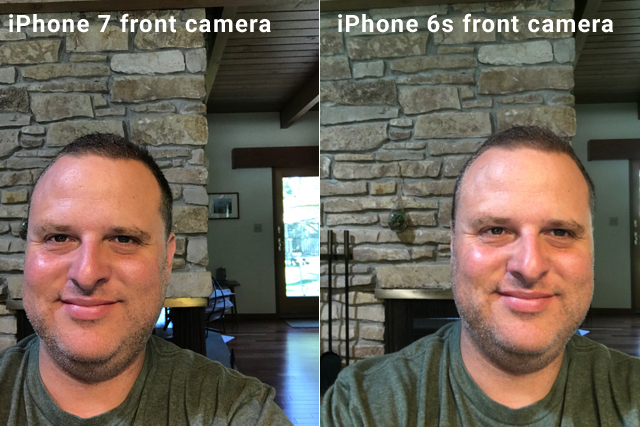 The front-facing camera is much better. On the main camera, under normal daytime shooting conditions, I could see just a slight improvement between the 6s and 7. More dynamic range and less noise are nice, but this phone has a very small sensor; it’s a fraction of the size of a mirrorless camera or DSLR. So while Apple says its pro quality, it’s not. But it’s true that for many, it’s the best camera users have owned, and it shows its skills in low-light conditions. That’s not just because of processor power, that’s because of an f1.8 aperture. The best lens I’ve owned was a Leica f1.4 (and it cost $500), and my current pro lens maxes out at f1.8. I won’t get all technical on you, but you’ll notice the difference in bars and with kids running around in your photo frame. This is a great prime lens still and video camera with optical image stabilization. The iPhone 7 Plus will be better, but I’m not carrying around a phablet in my pocket.

I don’t see it, at least in my first two days of operation. It feels just like my last phone, when it was new and fresh. Some of that is because app developers haven’t pushed the iPhone 7 to its processor limits yet, but it’s also because fast is fast. Shaving a 10th of a second from opening an app is imperceptible at this point. So much stuff is in the cloud now that the speed of downloading a photo or a song has little to do with the CPU, anyway. Verizon was already fast; I don’t notice network speeds being utilized any differently than they were before. Don’t get too excited about these published performance bumps, although with all the new stuff in iOS 10, this is the phone it was designed for. That may not matter to you, but it does to me.

The lack of a pushy home button is taking a little getting used to, but having had a few iPhones in which the button broke, I like this. Touch ID is finally better, so I don’t have to manually enter my passcode as much. I’ve never dropped my phone in the toilet or suffered water damage before, and I’m not going to test out the waterproofing on my two-day-old iPhone. I’ll take Apple’s word for this.

Should you buy it?

Well, probably. Maybe. If you owned a previous iPhone and you can still sell it for a few hundred bucks, then this is a good short-term investment until the next iPhone comes out, when you can sell this one at the highest price. And so on. If you’re on the annual upgrade plan by leasing an iPhone, then you have nothing to lose, really, because you're already shelling out the money each month. I mean, "investment" is relative; you’ll always be paying a premium for quality technology that rapidly loses value, like cars or TVs, but these just don’t last very long with normal use (and that’s assuming you don't crack the screen first). Ask yourself if your smartphone is worth $1-2 a day to you; that will answer your question.

Will this specific phone blow you away? Probably not. If you have a non-exploding Android phone right now, then pass on this iPhone and wait one more year. Apple is getting users ready for big changes with iterative changes that will all be copied soon enough. If the best phone in the world being a little better is good enough for you, then it’s worth it to upgrade. Even if it’s not obvious, the iPhone 7 is the finest phone Apple has ever made.